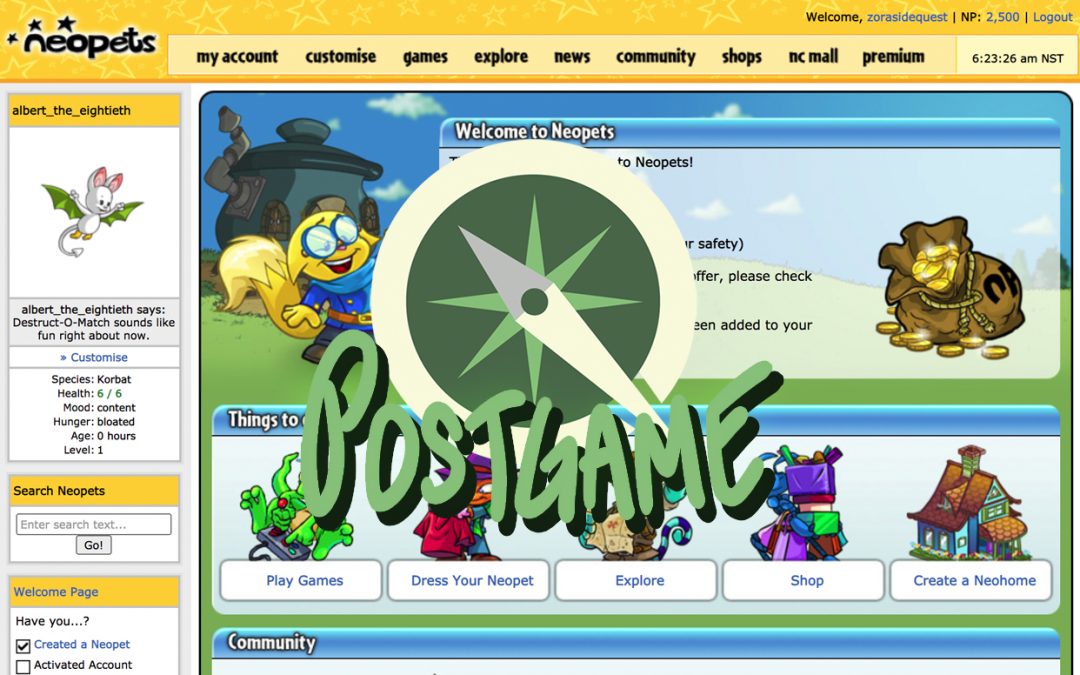 Welcome back to Postgame, Sidequest’s monthly podcast, where the editors lay down hot takes on cold games. Spurred by our discussion of our first games, we took our focus to Neopets this month—and, more generally, the wide world of adolescent interaction. To help focus our discussion, we each played Nina Freeman’s Lost Memories Dot Net, which activated many, many memories. So many memories.

END_OF_DOCUMENT_TOKEN_TO_BE_REPLACED

Hey, everybody! Before we get started, I wanted to direct you to a place where you can tangibly help stop the spread of hate in America against AAPI individuals. Targeted hate crimes against this community have severely spiked in recent months, and if you have the time and resources, I highly recommend donating to one of the listed organizations. END_OF_DOCUMENT_TOKEN_TO_BE_REPLACED

Howdy, gaming lovelies! For those that celebrate, we’re less than one week out from Christmas! Remember to sneak in a little self-care with some gaming and some fancy hot cocoa. On to the news, ho ho ho! END_OF_DOCUMENT_TOKEN_TO_BE_REPLACED

Happy Wednesday! What are you playing this week? I’ve been playing Overwatch‘s “Retribution” and “Uprising” PvE modes. I love that in addition to the regular versions of those missions, Overwatch offers modes where you can play as any hero. I’ve been playing “Uprising” as Soldier 76, whose heal makes the mission a lot more survivable than usual.

END_OF_DOCUMENT_TOKEN_TO_BE_REPLACED

Neopets Is Still Around, Still Loved

Neopets, put simply, is a virtual pet website. In practice it is a whole universe. It was launched in 1999 and bought out by Viacom in 2005. Players of all ages registered for accounts, adopted their virtual pets, and entered the world of Neopia. The website allowed for layers of play — not only could you clothe, feed, and care for your pet, but you could travel the world, play flash games, read lore, and so much more. Unsurprisingly, many of the WWAC gamers were, and some still are, Neopets lovers.
END_OF_DOCUMENT_TOKEN_TO_BE_REPLACED