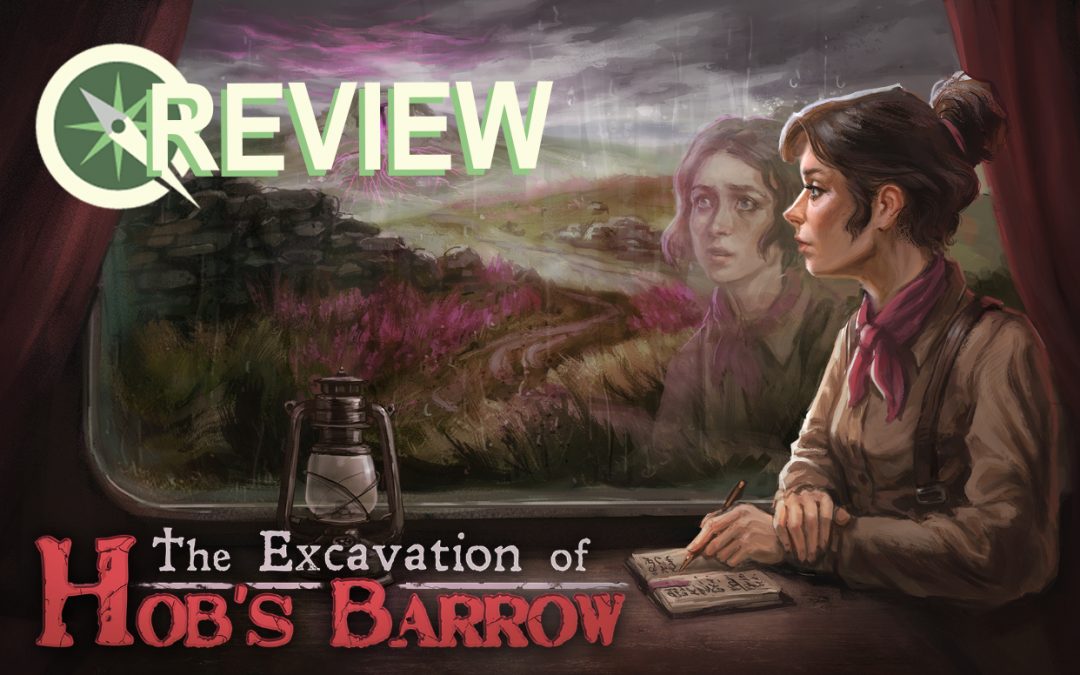 Horror games are not my genre. It’s hard for me to not feel an intense fear because games ask us to participate in them, and my participation usually involves involuntarily throwing my controller across the room at the first jump scare. There was a chance that The Excavation of Hob’s Barrow, a point and click adventure developed by Cloak and Dagger and published by Wadjet Eye Games, would be the same; I’d dabble in the folk horror aesthetics, but one ghoulish face popping onto the screen or one perfectly timed scare chord and I’d be in the market for a new laptop. Thankfully, The Excavation of Hob’s Barrow’s embracing of the folk horror slow burn, its reserved frightening imagery, and its involved but not overly complex puzzles kept me enraptured the whole way through.

The Excavation of Hob’s Barrow

Sidequest was provided with a copy of The Excavation of Hob’s Barrow for PC in exchange for a fair and honest review.

The game’s premise is textbook folk horror. You play Thomasina Bateman, a young antiquarian invited to the remote town of Bewley to excavate—you guessed it—Hob’s Barrow. She arrives in town to find a gaggle of unfriendly, isolationist townsfolk and the man who invited her is nowhere to be seen, but she’s made of sterner stuff than the stereotypical Victorian lady. She presses on, asking the locals for information, finding her missing man, and untangling her own family history from the mysterious barrow and its rumored curse.

For those unfamiliar with the concept of folk horror as a genre, it’s derived from films like The Wicker Man, Blood on Satan’s Claw, and Picnic at Hanging Rock. Modern iterations like Kill List and Midsommar build on the aesthetics with increasingly brutal imagery and poignant social commentary, though neither are missing from the classics, either.

The Excavation of Hob’s Barrow falls more neatly into the early stages of the genre (until, quite shockingly, it doesn’t). It leans more on subtle uncanny imagery and ominous hints of rituals than concrete evidence that there’s anything more to Bewley than a general distrust of outsiders. Of course this small English village has rumors of the Fair Folk. Of course a curse was said to be placed upon it at some point in the past. But our intrepid heroine Thomasina is a woman of science—she doesn’t believe in all that “hogwash,” as she’s so fond of calling it.

We, the audience, know better. The Excavation of Hob’s Barrow is a game built on dramatic irony—a narrative technique in which the audience is more aware of the protagonist’s predicament than the protagonist is. “Don’t anger the fair folk!” we may shout at our screens. “Don’t step into the fairy ring! Thomasina, do not participate in any kind of ritual!” We watch her do this, but worse, we make her—even as I chided her for writing off local superstition, I pushed her further into the mystery, desperate to know what would happen. Thomasina is a likable, if frustrating, horror protagonist. I didn’t want her to be punished for her lack of superstition, but I also felt she, like many folk horror protagonists, was in over her head because she assumed that backwoods townsfolk can’t possibly mean any harm. They can, and in this story, some of them absolutely do. 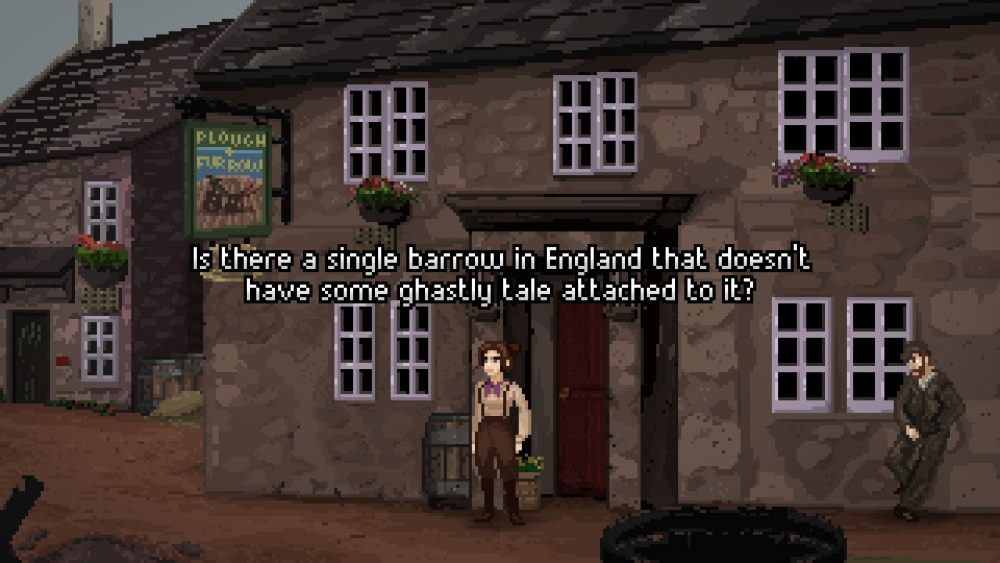 The story is told through classic point-and-click adventure mechanics, tasking you with talking to Bewley townsfolk, combining inventory items, and solving puzzles ranging from finding the correct kind of flower to turning ancient dials in a tomb. Hob’s Barrow doesn’t shy away from difficulty, but unlike many classic point-and-click games, the solutions aren’t opaque or unsolvable. They progress logically. The two times I got stuck and had to resort to emailing for help, I felt silly afterward—of course that was how each puzzle was solved. While guides will no doubt start popping up on Steam and elsewhere now that the game is out, spend a little time combining objects and thinking about what’s taking up space in your inventory that hasn’t yet been used. If I’d done the same, I might never have needed the help.

Though at first glance Hob’s Barrow might look like a classic point-and-click, it has features that set it apart from most. First, the stunning pixel art. Though much of the game features a nice, but standard, less-detailed style, several shocking scenes cut to incredibly detailed images that, more than once, made me literally gasp. Horror can be effective at any resolution, but the sudden cuts to these detailed, unnerving images brought home the fright Thomasina faced. I’ve never seen an old stray cat look so scary in all my life.

Likewise, the game is fully voice-acted. Though I tend to skip through long scenes of voice-acting (sorry), I appreciated how much depth each actor brought to the characters. Coupled with the dialect-heavy dialog, the acting ensured I felt truly immersed in the countryside of Bewley, whether I wanted to be or not. Hob’s Barrow would be good on the strength of its writing and puzzles without the art or voice acting, but these elements bring it to another level of polish. 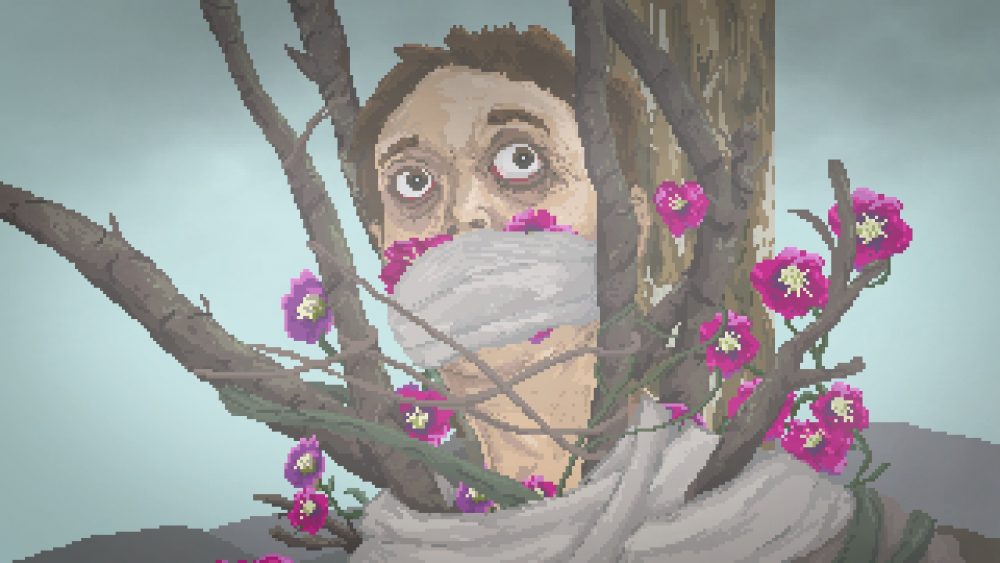 The sense of dramatic irony The Excavation of Hob’s Barrow employs ramps up the horror and leads us to fear for Thomasina even as we lead her down an increasingly dark path. But there are some drawbacks—we’re conditioned to pay attention to loose ends in a game genre that asks us to connect things to progress, and there are a few elements that don’t go anywhere. The ending came a bit too quickly, and while it was enjoyable, I kept wondering about all the loose threads left hanging. What was happening with Father Roache? What happened to the goat? Who’s really behind all of this?

The nature of point-and-click adventures is that some questions will be left unanswered, doubly so when the genre is folk horror. We ought to be left with a sense of unease, of fear that we’ve missed something somewhere. In practical terms, that makes us want to replay. In thematic terms, that confusion and lack of certainty cement the game in the folk horror genre. Much like audience reactions to Dani in Midsommar or Neil Howie in The Wicker Man, it’s hard to be certain who the real villain is: the intrusive, skeptical outsider, or the townsfolk and all their secrets? And where does that leave us, the distant voyeurs?

The Excavation of Hob’s Barrow is an excellent entry in the slim but exciting field of folk horror games, of a kind with Year Walk and Pathologic 2. The high level of polish and sharp story make up for the narrative loose ends, which can also work to further the sense of estrangement and unease common in the folk horror genre. Perfect for the Halloween season, Hob’s Barrow will leave you with a cold sense of disquiet and a whole new appreciation for what pixel art and modern point-and-clicks are capable of.