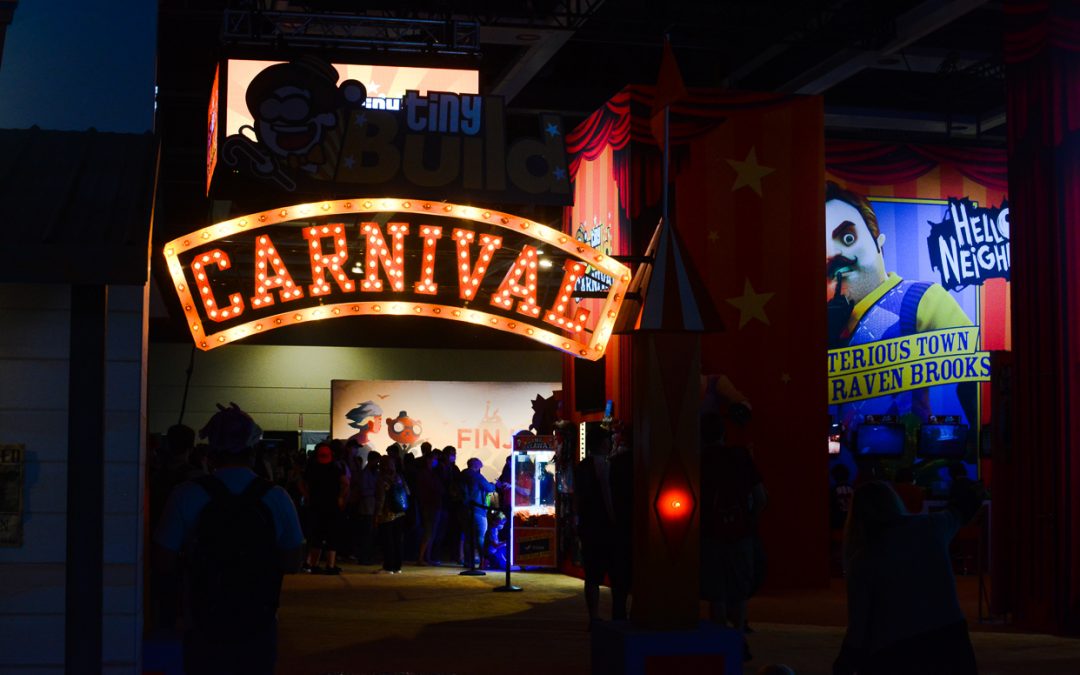 PAX is a lot. It’s always been a lot. It’s always going to be a lot. It’s four days of walking through a dark convention center while neon lights illuminate computer cases. There’s inexplicably a carnival-themed booth that takes literal minutes to cross in the center of the con floor. Everything wants your attention, and it screams for that attention.

This year, PAX West also took place in the middle of a pandemic. Unlike most conventions, it required that attendees provide proof of vaccination (negative tests were not an acceptable substitute) and remain masked the entire time they were attending, unless they were in a designated eating area. It’s not a perfect solution, nor is it risk-free, but if conventions must go on, I wish that more would go on like this. In my anecdotal experience, mask use was generally good; unlike Emerald City Comic Con or San Diego Comic Con, I saw remarkably few people’s noses. And because there were designated areas for eating, there was a lot less wandering around the floor with masks off to eat and drink—most people stayed where they were supposed to be and masked up when leaving.

It also felt surprisingly like PAX—and, thankfully, without the tension of the last one I attended in 2019, which happened amid accusations of abuse and sexual assault throughout the industry. Everything wanted my attention, as always. Sometimes it was successful in getting it.

What struck me most about this year was the absence of the Indie Megabooth, which often showcases games I’ve never heard of at all. It’s not that indie games were absent—in fact, there were lots of great indie games in the section the Megabooth used to occupy—but rather that there seemed to be a great deal fewer “micro”-indie games, the kinds that are especially daring or unique. Such games still existed at PAX West, but they were harder to find amid games that were no doubt good but not personally interesting to me. There were, for example, quite a few Metroidvanias and cute pixel-art puzzle games and shooters. There is nothing wrong with them, but most came from mid-range boutique publishers—not not indie, but also not the specific brand of indie I’m looking for, if you feel me.

In the absence of both the Indie Megabooth and most of the major publishers—aside from Nintendo, which had a huge presence for Splatoon 3—these boutique publishers were the main focus of the floor. Also McDonald’s, for some reason, which had a large booth running a series of claw machines and raffles that was literally always busy. They did not offer McDonald’s food. They had hamburger socks and earbuds. PAX is always at least a little nonsensical.

So, #McDonalds showed up to #PAXWest, and I would say this is probably one of the most talked about things on the entire floor as no one knows why they’re here! (I know now, but it’s been the mystery of the event!) pic.twitter.com/k35K3OS10L

It was strange, as most PAXes are, but strange in a new way. While I truly didn’t miss the huge booths of AAA publishers, I hope future years bring more indie games, especially of the tabletop variety. Still, there were some great-looking games this year—here’re a few I’ll be keeping an eye out for.

Tracks of Thought is an adorable little game in which you play a ladybug on a train solving a light-hearted mystery. The art style is painfully cute, but what really made it stand out was its card-based dialog system, in which you use different rhetorical approaches to solve conversation-based puzzles. The developers call it a game of “(self) exploration,” which intrigues me; the demo was mostly about doing little quests or learning about the other train passengers before trying to convince them of something through the card game. It’s reminiscent of, but also distinct from, Signs of the Sojourner, as it leads with the moods and tones of the conversations rather than symbolic representations—it’s still a puzzle, in a sense, but puzzling things out requires you to pay attention to the dialog and respond in the way you think will be most likely to connect with the conversational partner. The mechanic may sound a bit manipulative at first, but in practice it feels nice; not everybody communicates the same way, and the game lets you try directness and indirectness, inspiration and logic, to meet a person where they are. I’ll be keeping an eye out for this one.

Frank and Drake is an intriguing adventure game in which you play one of two of the titular protagonists, both of whom live in the same apartment but never interact due to differing schedules. Frank works during the day, Drake at night, but both work together to solve the conspiracy that has brought them to that apartment. With rotoscoped animation, the game has a beautifully uncanny vibe; and now that I’ve learned the characters are inspired by Frankenstein and Dracula, the vibe fits even better. Though the demo I played was brief and only lightly touched on the story, I was struck by the visuals and the tricky, but not irritating, puzzles. Though there’s no clear release date yet, Frank and Drake is expected to launch in 2022 or 2023.

The Last Case of Benedict Fox

The Last Case of Benedict Fox managed to impress me despite playing under less than ideal conditions (read: noisy show floor, giant display TV so everybody could watch me as they walked by, distracted by wanting lunch). I am generally not a fan of Metroidvanias, but I am a fan of occult trappings and, as developer Plot Twist describes it, “noir pulp fiction, and early 20th-century jazz music,” so I gave this one a try and expected to be merely whelmed. In fact, I was quite impressed—though I was terrible at it, the game was fun and fluid to play, and the level of customization (through occult tattoos!) made me feel like there was likely enough flexibility to ease up the difficulty for me in a way that wouldn’t feel like it cheapened the experience. I don’t know that this is one that I’ll rush out and buy when it’s available, but I’m intrigued to see where it goes and what the reception is upon its release (currently planned for 2023).

The Last Hero of Nostalgaia

I knew I was going to be bad at The Last Hero of Nostalgaia. Described as a hybrid of The Stanley Parable and Dark Souls, this action-adventure has you playing a stick figure-like hero trying to save a high-def video game world from the force draining its beautiful graphics away. And I was, in fact, very bad at it. But because the game has a satirical tone (and a sneering narrator), my repeated failures became laughable. I ran out of mana and couldn’t figure out how to equip a sword, but did manage to unequip my shield. I rolled and rolled and finally just let an enemy kill me in the hopes that I’d reset, which did work. On my second go, I figured out the controls and had a much more successful, but still difficult time working through the enemies. For the briefest moment, I felt the kind of satisfaction that I think appeals to people who actually like Soulslike games—a formerly insurmountable task suddenly became doable, and each success felt earned. That said, I’m probably going to leave this one to the Soulslike enjoyer in my house; life is too short for me to struggle with equipping a sword. The Last Hero of Nostalgaia releases October 12, 2022.

Despite all that, The Last Hero of Nostalgaia was not the most difficult game I played at PAX. That honor belongs to Melatonin, a deceptively adorable rhythm game in which you play the abstract dreams of a young person rendered in beautiful pastel colors. Swipe credit cards, eat pizza, and more by pressing buttons in time with the music—or, in my case, press buttons at the wrong time and watch pizza slap your character in the face. I’m not sure exactly what I was doing wrong in this one, but Melatonin is forgiving; you don’t get thrown out of the level for repeatedly failing. Instead, you get a rating at the end of the level. The music continues to play without a bunch of wrong notes (but missing the satisfying cha-ching! of a successful hit), so despite the difficulty, it’s not at all punishing. That’s a bit of a mixed bag—on the one hand, it lets you have fun even if you’re not all that great at rhythm games. On the other, I wasn’t sure what I was doing wrong, nor how to improve. Because the game has fun visuals and audio, I wasn’t particularly bothered—but I do wonder how I’d feel if I was playing a full game rather than a demo. Melatonin is planned to release later this year.