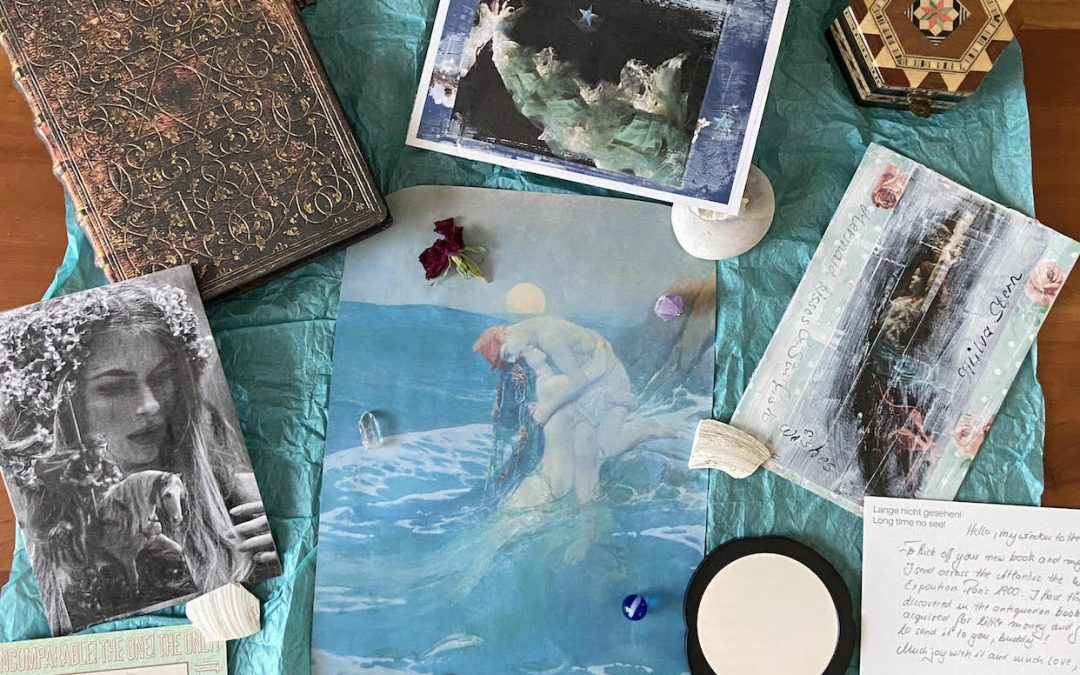 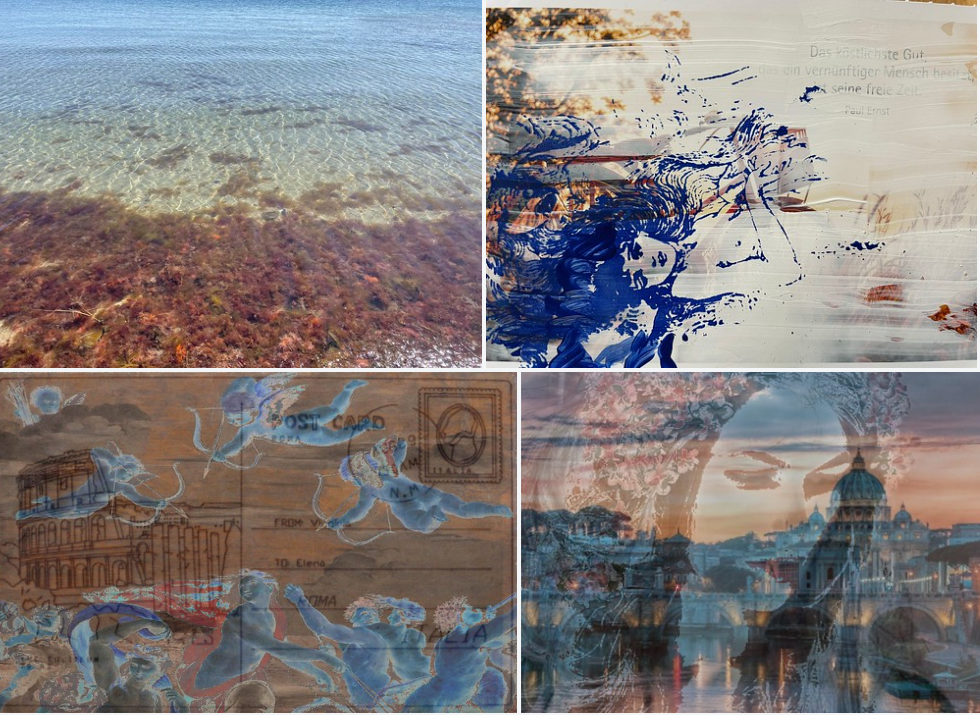 This interview has been lightly edited for clarity.

Where did the idea for The Secret of the Mermaid originally come from?

Kevin Dann: This past spring, while doing research for SAILORTOWN—an immersive musical street theater piece set in South Street Seaport in Manhattan—I kept unearthing early 19th century tales of Manhattan sailors who had seen mermaids on their sailing voyages. Of course, Manhattan is more famous for having hosted PT Barnum’s fake “Fiji Mermaid” at the American Museum on Broadway in the 1840s. Just as I was finishing writing the musical, I had a dream of standing over the East River in Brooklyn, when a mermaid came to me and said: Please take my secret to the world… JUMP! Cross the big pond and start your journey in Rome, the Eternal City! Seek me there; I am waiting for you.

The Secret of the Mermaid is the result of that dream.

What drew you to make a game about mermaids specifically?

KD: In previous books (Expect Great Things; Road to Walden; Enchanted New York) I have argued for the actual existence of elemental beings; mermaids are undines, the elemental beings of the water realm. I founded an organization, Mermaids Are Real, and found that wherever I go, people almost unanimously agree that mermaids exist. Of course, the Wall Street Journal (whose review of my Expect Great Things was headlined “Thoreau Believed in Fairies”; the New York Times Book Review similarly crowed “Thoreau the Weird”) and the American Museum of Natural History think we mermaid lovers are crazy!

Margit Schäfer: Clarissa and Dr. Dann are old pandemic pen pals. Our correspondence around mermaids arose since springtime this year. We love to collect great things around that topic like maps, images, research, and so on. Our emails were sent across the ocean and so it was clear that at some point, we would create a project about mermaids. Dr. Dann founded MAR, and Clarissa began to play with dances and street art ideas.

KD: Instead of writing a book arguing for the reality of mermaids, I thought it would be fun to see if we could draw both believers and skeptics in with a game. Clarissa and I wanted to bring together our love of: writing postcards and journals; sacred dance; street theater; and magical ritual. The Secret of the Mermaid is the product of that collaboration.

Mermaids have displaced fairies as humanity’s favorite elemental beings. Thanks to Disney’s 1989 Little Mermaid animation, a whole generation of young girls grew up obsessed with mermaids. Dozens of aquariums around the world now have costumed mermaids on staff who will—for a fee—swim with visitors. There are professional Mermaid Academies, where women learn how to swim with artificial mermaid tails. Next May, Walt Disney Pictures’ live action remake of The Little Mermaid will create another pop cultural storm and take another generation away from the truth about mermaids: that they are magical, metamorphic, eternal creatures of the subtle realm of the Earth, and have enormous gifts for humanity if they learn to honor and communicate with them. Our game aims to meet the mermaids where they live, so that we might benefit from these gifts.

This game features a live run after the conclusion of the Kickstarter. What should players expect out of that? What do you hope to achieve or convey by running a live game?

KD: Dr. Dann will actually conduct his research and Clarissa will carry out her performances in Rome (and beyond—the game will take them beyond Rome to undisclosed other European locations) in August, during the campaign. Shortly after the campaign ends (at the Full Moon) on August 25th, we will conduct the game. Backers play the game over the next two weeks through the exchange of emailed mermaid postcards with both Clarissa and Dr. Dann, whose parallel initiatives will merge at some point. A sort of pilgrimage adventure story will unfold that brings the Scientist/Historian and the Ritualist together, to combine their forces. The two pilgrims will actually be helped in their quest by the gameplayers, who will receive emailed postcards giving a set of both magical tasks and “field research” to execute.

The goal is for all of us to discover The Secret of the Mermaid—and also hidden dimensions of ourselves. Players will keep a journal to document their explorations and discoveries in the mermaid’s domain.

What can you tell us about what the postcards and the artifacts are like? What was it like designing them?

KD: We have a large collection of historic mermaid images that Clarissa has altered with her collage technique, aiming always to create beautiful images that communicate the mermaid’s watery realm. Dr. Dann will collect documents and maps that will help the players connect with their local mermaids.

MS: The postcards will include artistic images of mermaids and hints to different game spots and locations, with a visual watery element. We are thinking about using screenprinting also, and aspects of upcycling will also play a role. Our base is our large collections of mermaid drawings, prints, and paintings from the last 100 years of myths and fairytales from around the world.

You describe The Secret of the Mermaid as a “keepsake game”—what does that mean to you?

KD: Masterpieces such as the ones that Clarissa and Dr. Dann will visit in Rome—Michelangelo’s Pietà; Raphael’s Triumph of Galatea; the Trevi Fountain—are Civilization’s Keepsakes. The small, intimate keepsakes in our homes are our “masterpieces”—the objects that most deeply express our fascinations and obsessions. 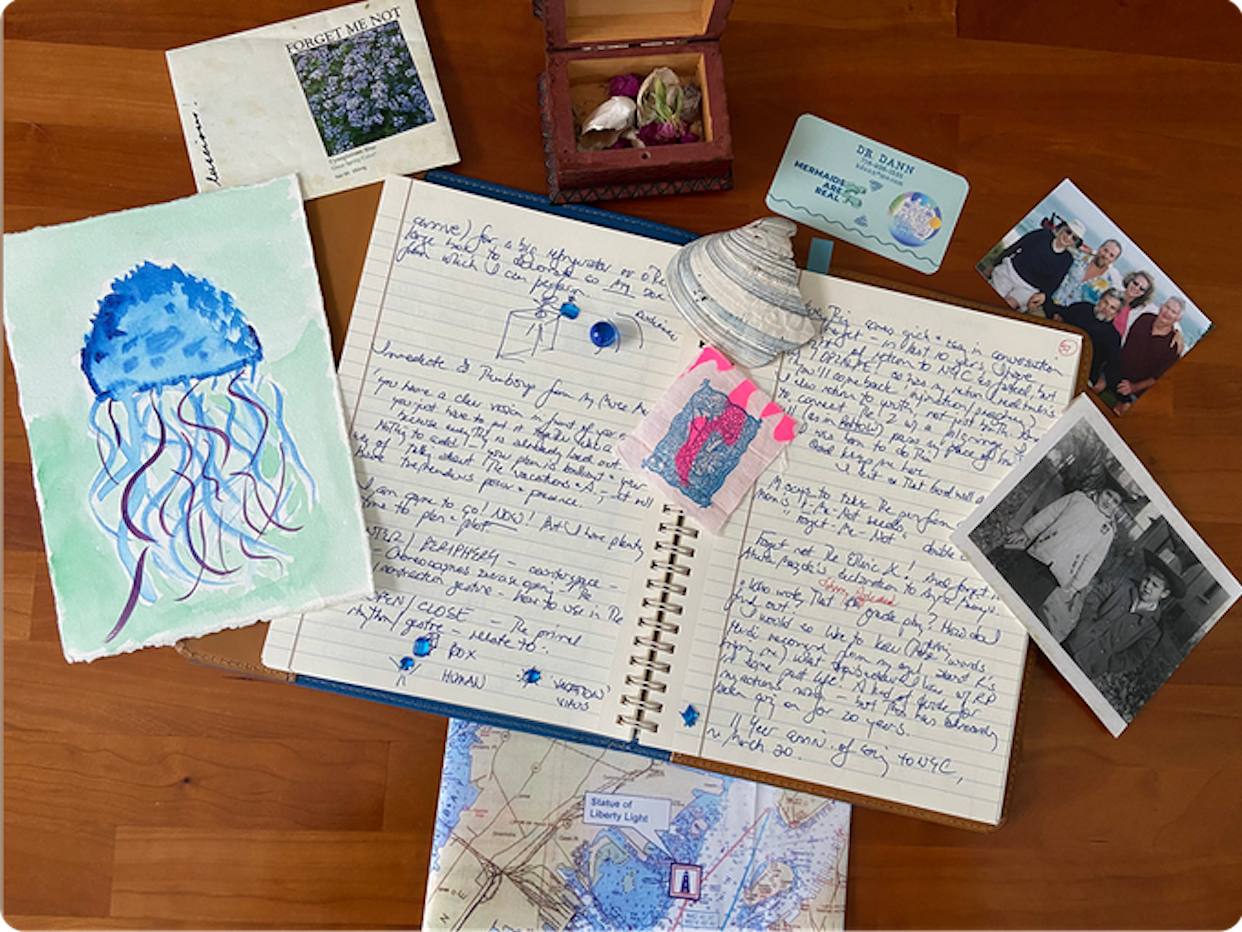 What other games were you inspired by while designing this one?

KD: As far as I am aware, artists Jeeyon Shim and Shing Yin Khor pioneered the Keepsake Game genre in 2021 with their Kickstarter-backed Field Guide to Memory. In 2022, Shing’s Remember August (again, a Kickstarter project) was another Keepsake Game. But the main inspiration, I would say, is our own lifelong habit of living our lives as a game! We have been “gaming” our watery home habitats for decades—Dr. Dann in the streets of NYC, as tour guide, troubadour, and immersive event creator; Clarissa as high school art teacher, Cosmic Dancer, and guerilla street artist. We have designed The Secret of the Mermaid Expedition and Game to be both interactive and intelligent—in the sense that players learn from each other even more than they learn from us, the game masters.

What do you hope that players will take away from your game?

KD: Through soul-nurturing exercises and explorations of the Watery Realm, The Secret of the Mermaid aims to cultivate personal Keepsakes to which players can perennially return for meditation and inspiration. They will also learn a set of playful exercises that connect them to the watery landscape and its beings wherever they live.

MS: We hope people will take away an awareness of the watery realm and its treasures. We all rely on water to survive! 71% of the Earth are oceans and 75% of our bodies as humans are made up of water. We are water!

KD: At the heart of this game is the understanding that the Earth keeps us, and the great expectation that we keep the Earth and Her waters through our conscious deeds of loving stewardship.

The Secret of the Mermaid is currently crowdfunding on Kickstarter, through August 25th, and it will be followed by a two-week-long live run of the game by mail.