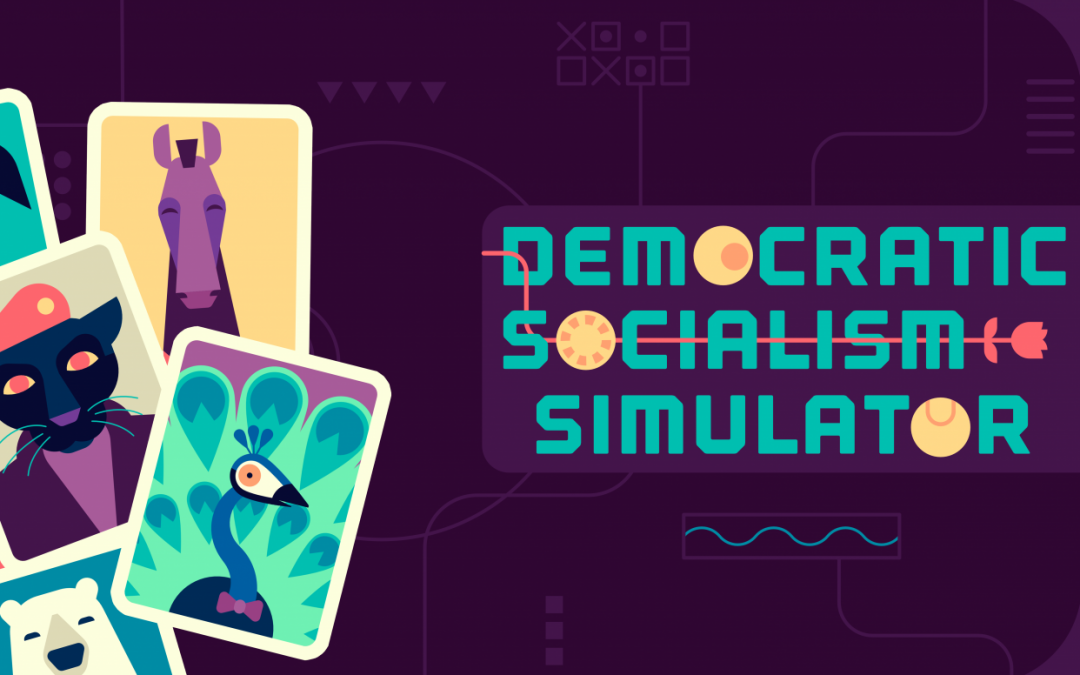 All games are political. But then there are games from Molleindustria, an indie developer whose explicitly political work has fascinated me since I stumbled upon McDonald’s Video Game back in high school. In this game, you manage McDonald’s from the supply chain down to an individual restaurant. No matter how much I tried to behave ethically, I couldn’t win—I didn’t get the message as clearly as I do now, but it left an enormous impression on me. I’ve been following Molleindustria’s work ever since.

One of their newer games, Democratic Socialism Simulator, caught my attention on release in 2020 but, ever behind on games, I didn’t play it right away. When it turned up in last year’s Itch.io Bundle for Racial Justice and Equality, I played a few rounds, expecting to feel forlorn and frustrated, as I typically do about the political direction of the United States. Instead, playing through the game—which imagines the potential roadblocks and frustrations that a Bernie Sanders-style Democratic Socialist president might encounter—I felt relief and something akin to hope. Because while Molleindustria’s games have historically opened my eyes to injustices and exploitation I didn’t understand, Democratic Socialism Simulator reminded me that things change, that we have more in common than we might think, and that fighting like hell to restore power to the people is always worth it.

In Democratic Socialism Simulator, you play as a hypothetical Sanders-like President of the United States. You’re gifted with a slight majority in Congress and a series of limitations and goals: you have a budget to attempt to balance; you have the option to restore power to people; and you have emissions to curtail. Your advisors, lobbyists, and special interest groups will present you with a variety of policies to enact or refuse using a Tinder-esque swipe mechanic—which is itself a pretty funny political statement as complex issues boil down to something you solve as if you’re on a dating site. Sometimes you can’t enact these changes, no matter how much you might like to, because you don’t have enough congressional support or because it’s not in the budget. In those cases, the game lets you save the tasks for later. 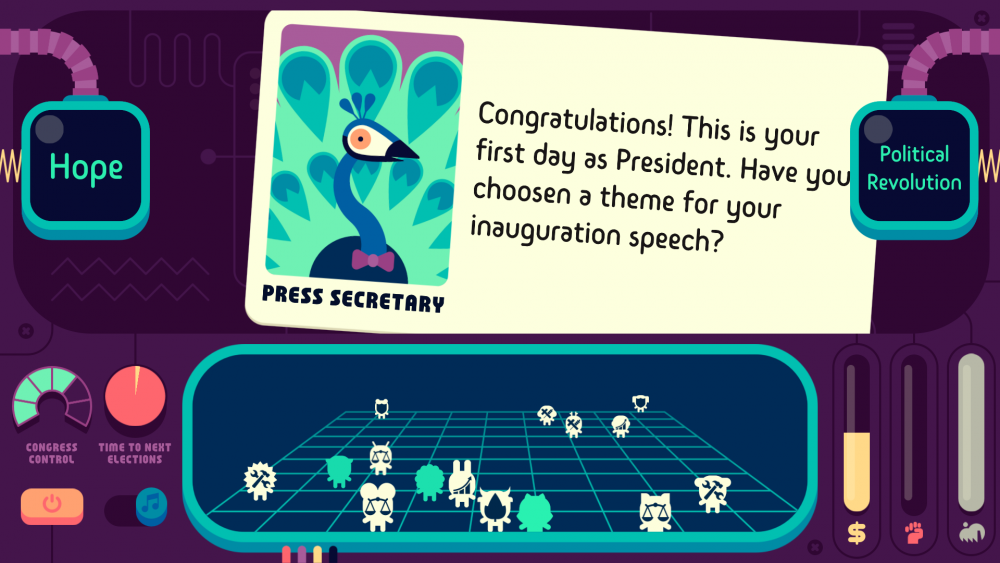 You also have the will of the voters, represented as little people who move forward (more willing to vote for you) or away from you (less willing to vote for you) depending on the policies you enact. Each voter has two major thematic groups of issues, such as traditionalism and rural life or environmentalism and sustainability. Almost every choice you make will piss off some voters and make others very happy, but a few are universally popular (or at least not damaging)—canceling student debt, your inaugural speech being on the theme of hope, or universal high-speed rail. Your choices can have long-term consequences, too. Invest in renewable energy and you’ll have the job transition team to contend with due to the loss of jobs in the coal industry. Spend too much time in deficit and inflation rises, making everybody angry with you. Too many radical positions and Democrats will start defecting.

All that ought to mean that this game only fed into my natural tendency toward political pessimism. Others have certainly felt that way! Instead, I came away from my first playthrough surprisingly inspired. As frustrating as it is to be unable to truly “win”—term limits exist, and so do assassinations and coups—the little rewards make it worth it. Invest in giving people what they need, and people whose main priorities are crime and keeping out immigrants shift their opinions to reflect things like worker’s rights and the environment. Even the military-loving, immigrant-hating voters, the ones I was least likely to please in my many playthroughs, were happy with things like rebranding climate action with military-style vernacular. Maybe they wouldn’t vote for me or my party in the next election, but common ground existed. And as their lives got better, their priorities changed, making them easier to please in the future. 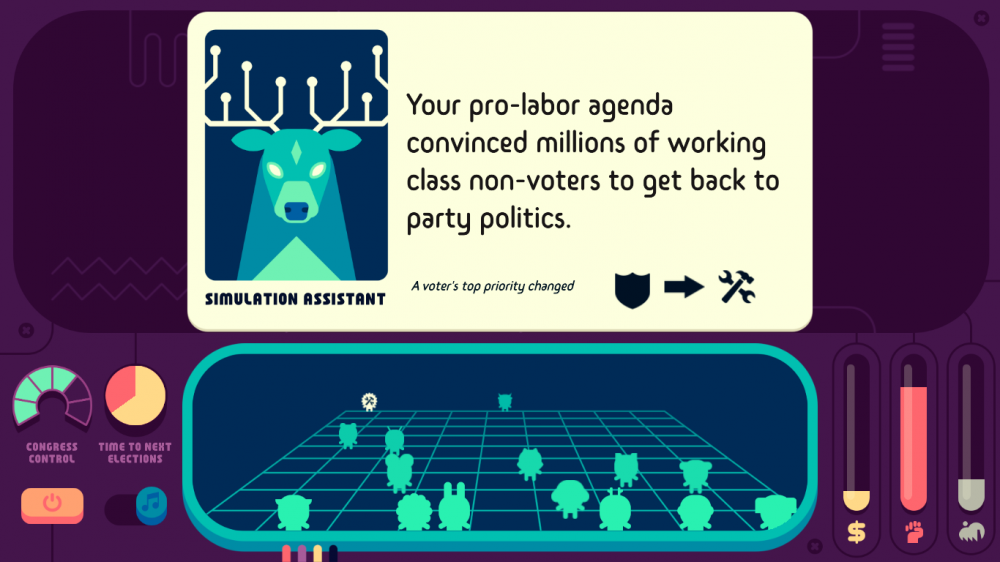 Obviously there are a lot of obstacles in America to overcome, and Democratic Socialism Simulator is very much about those obstacles. But what kept occurring to me as I played was that progress is not impossible. Sometimes compromise happens and the ambitious goals have to scale back. Sometimes I have to delay universal basic income, but I can pass single-payer healthcare. I never did get enough of a congressional majority to expand the Supreme Court, but the people who elected me got power back from the government, a less polluted world, and cancellation of student debt. Even if I got escorted out of the Oval Office by the US military, peoples’ lives were materially better for it, and would be for some time. Good can still be done even amidst political roadblocks.

Democratic Socialism Simulator isn’t about realism—most simulators really aren’t. But imagination and fantasy have a place in creating a better world, too. We need to know that America is not uniquely immune to social and political progress, though it often feels that way. This game’s particular brand of tongue-in-cheek political commentary, bangin’ take on “Solidarity Forever,” and swipe mechanics may not be everybody’s preferred method of envisioning the future, but I found it curiously hopeful to look at things through a cheeky simulator.