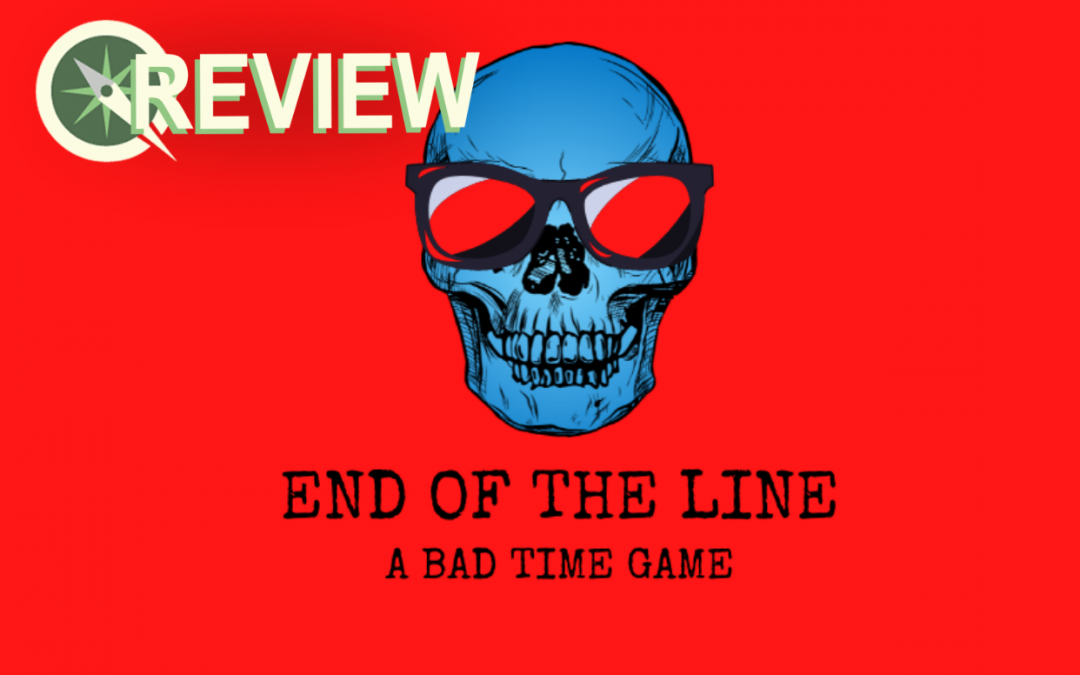 The Final Destination films are something of a guilty pleasure in my household. If you’re not familiar, the series follows teens and young adults who narrowly avoid death thanks to a premonition and are then stalked and systematically murdered through strange “coincidences” as Death tries to settle the score. Also, Tony Todd is there.

End of the Line

End of the Line, a tabletop RPG by Urania Games, makes that premise playable. I stumbled across the game somehow and bought it immediately, excited to weave together my love of TTRPGs with my husband’s love of this, uh, not very good but enjoyably consumable horror franchise.

As it turns out, avoiding Death that’s personally out to get you is hard. End of the Line is playable for two to five people, with one person taking on the role of Death and the others playing the hapless fools caught in its snare. Play takes place in two phases—one in which the players go about their normal lives while Death stalks them, and one in which the players must attempt to kill someone else, thereby stealing their remaining lifeforce. If the players successfully murder someone before Death comes to collect, they win. Otherwise, predictably, Death wins. Failed rolls in the second phase, when players are trying to murder someone else, result in an increase in the “Bad Time Modifier,” making it more difficult to succeed on the next one.

Players have five stats—Smart, Strong, Sexy, Subtle, and Snarky—into which they can allot 4 points total. With each action they aim to take, they roll 4 four-sided dice based on a skill that Death assigns them, minus 1 die for every point in that skill. If your character is exceptionally sexy (3 points) and attempts to seduce the friendly axe salesman at the hardware store, they would roll 1d4 (4 dice minus 3 points in the skill) and add the Bad Time Modifier to the result. If the roll plus modifier is above 8, the player fails. If it’s above 16, they may die, depending on the phase.

We struggled with the rules on our first playthrough. We were unsure how many dice we should be rolling per action, and then we were unsure how many actions we could take per phase. Phases determine the consequences for failure and success, but it often made sense to take multiple actions, and therefore rolls, per phase. That meant that by the end of phase two, my husband racked up enough in the Bad Time Modifier to make success impossible. It was a quick death.

Still, the Bad Time Modifier didn’t stop us from having a good time. End of the Line, like the film franchise that inspired it, revels in absurdity. In later games, players died to vats of mud at spas or from bullet ricochets off steel head plates. Even when we struggled to make the game feel like players had even the slimmest hope of succeeding a single roll, we laughed through the deaths. I appreciate that End of the Line leaves space for players to imagine how each phase might look, but some examples would have helped guide us a lot. Even so, the cooldown after every game turned into a discussion on how we might tweak the rules to at least give players a single chance to overcome the odds, which was enjoyable in its own way.

It’s not that it’s not fun to fail, but the characters of Final Destination cling to the hope that they’ll succeed. Mechanically, it’s quite clear to the players of End of the Line that the door to Death is already half-closed when they begin and the crack of potential success disappears with every action they take. None of the players resorted to not taking any actions, but if everybody was doomed to fail, I would have at least liked a little more collaboration between the players and the GM rather than just having the GM narrate.

Thankfully, the bare-bones rules mean tweaking them is quite easy, and the two additional rulesets—a serial killer-themed adventure and a true crime podcast investigation—add in some fresh takes that do alleviate some of the base game’s intense difficulty. Though I didn’t get a chance to play through the serial killer adventure, the true crime podcast was a lot of fun for my players because there were three potential outcomes—death, a terrible podcast episode, or a great podcast episode. Thanks to a series of strange clues and a crackpot theory, our game’s kooky “Paranormal Murderology” professor, pretentious host, and rude little gremlin managed not to die to an unrepentant cake thief, but they did tank their podcast’s reputation. I also tweaked the rules a bit in the eleventh hour without informing my players what I was doing, removing a point from the Bad Time Modifier for each clue they managed to fit into their theory. They still had to roll to see if they succeeded (and with two failed rolls, they did not), but there was a chance they could make it work. This let us share in the creativity of the failure as they came up with the theory but left the outcome to chance, rather than just having me narrate their grisly deaths.

In the three groups I played End of the Line with, we tossed around different ideas for how to relax the difficulty while maintaining the threat. Maybe we ought to narrate a whole scene before committing to a dice roll, or maybe successes could lead to a removal of a point in the Bad Time Modifier. One player suggested we pull the “Chaos Pool” mechanic from Goat Crashers: once per game, a Goat Crashers player can remove all the dice from the chaos pool, which works against the players, and add them to their roll. This lowers the pool back to zero and gives them one more-or-less guaranteed success, but the game doesn’t end, leading to more opportunity for failure down the line. Your approach may vary, depending on what your players are getting out of the game—if they’re gluttons for punishment, the rules may work exactly as written. If you like to snatch their hope away yourself, a few changes get the job done.

End of the Line‘s difficulty was the biggest stumbling block in the game for me and the people I played it with—I wanted them to have a sliver of hope so playing didn’t feel futile. But because the game is so flexible and fun in tone (despite, you know, the looming threat of death), everybody had a good time. Keeping communication open and allowing on-the-fly changes about the rules while playing, as well as playing with more people, made the game its most fun. Even if we had some hiccups, I’d gladly play End of the Line again and again.