Preview: Face Your Dreams and Fears in I Was a Teenage Exocolonist 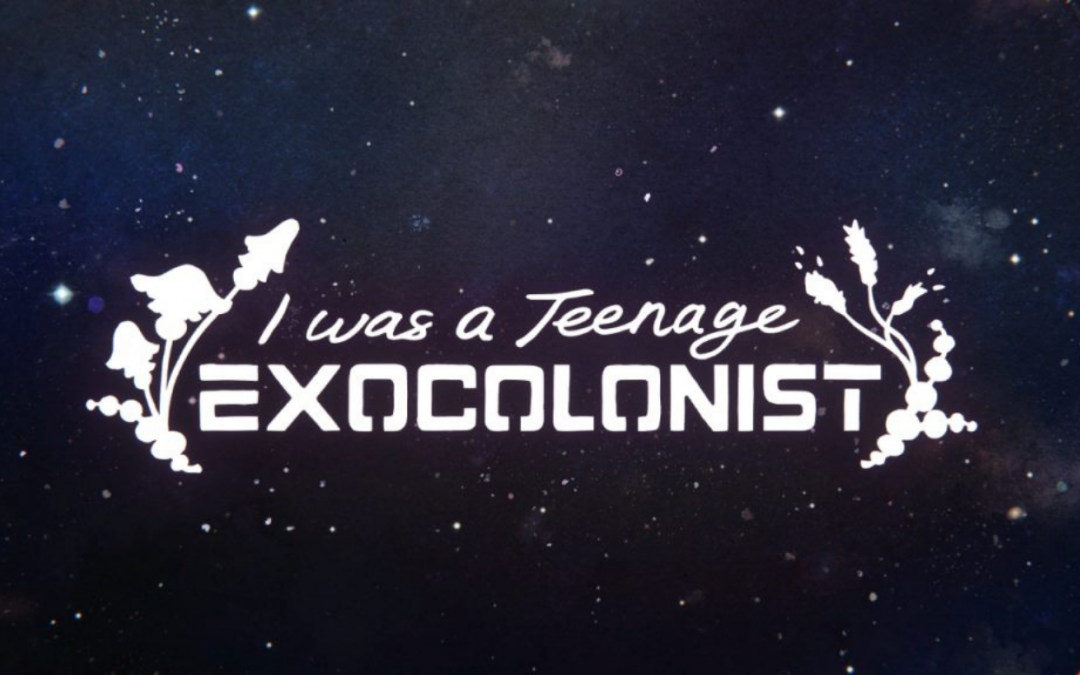 I have been a big fan of child-raising simulation games from as far back as the iconic Princess Maker, developed by Gainax, to the more recent Growing Up, developed by Vile Monarch. I was immediately pulled in by I Was a Teenage Exocolonist because of its premise as another game of this genre, as well as its very lovely visuals. Not only have I been intrigued by what I have tried of it so far, I was also pleasantly surprised to find something with darker depth underneath its surface.

Developed by Northway Games, I Was a Teenage Exocolonist is set on an extrasolar colony where you dictate the life of one of its inhabitants as they grow up.

Like other child-raising simulation games, your actions are bound to the limitations of an in-game clock, but what sets I Was a Teenage Exocolonist apart is that it has a little more meat to it: compared to other titles of its genre in which you set a schedule through a straightforward menu, Teenage Exocolonist actually provides an overworld map where your character can walk around and perform various activities. 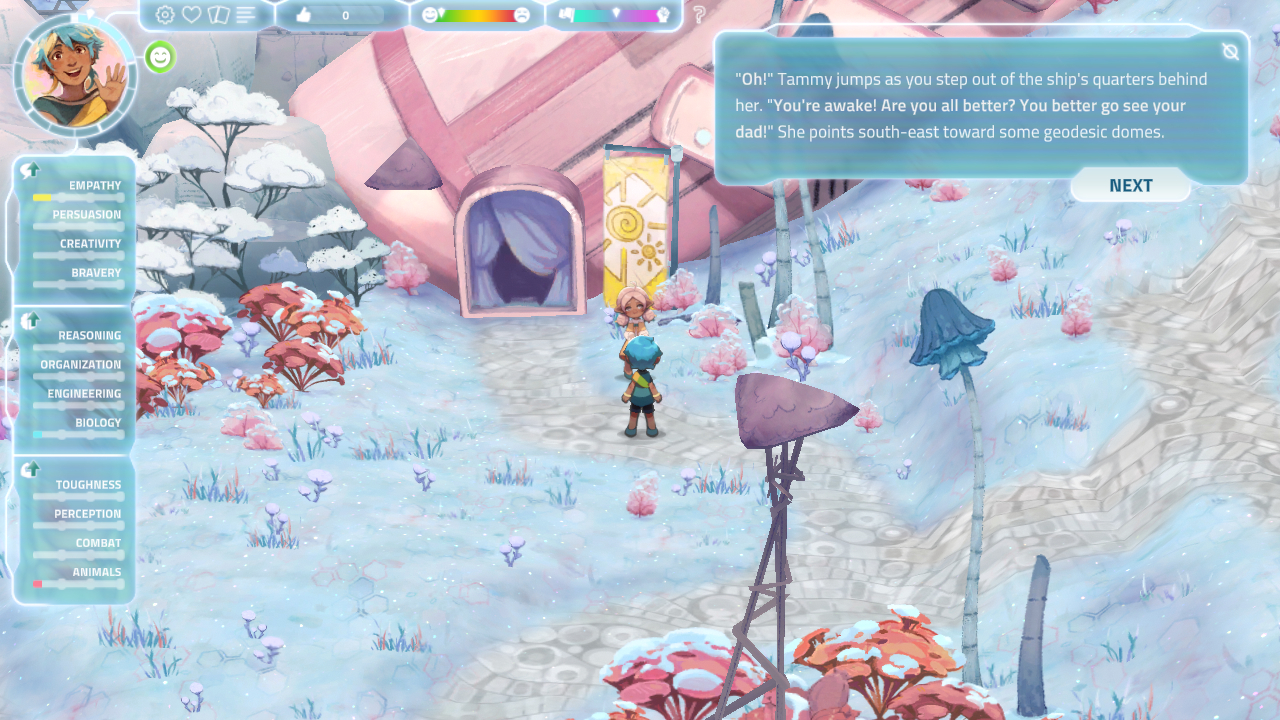 In addition, events are also catalyzed not only through pure probability working in conjunction with your character’s abilities, but through card-based battles.

Throughout the game, you collect special cards through various life events or benchmarks you achieve. In essence, these cards symbolize your character’s memories. You are not necessarily competing with anyone in these card battles, but you have to meet a certain quota by stacking enough cards for the event to succeed. Ultimately, much of the progression of the game is made through choices you make in dialogue scenes, as is standard for most choose-your-own-adventure-type formats and visual novels. 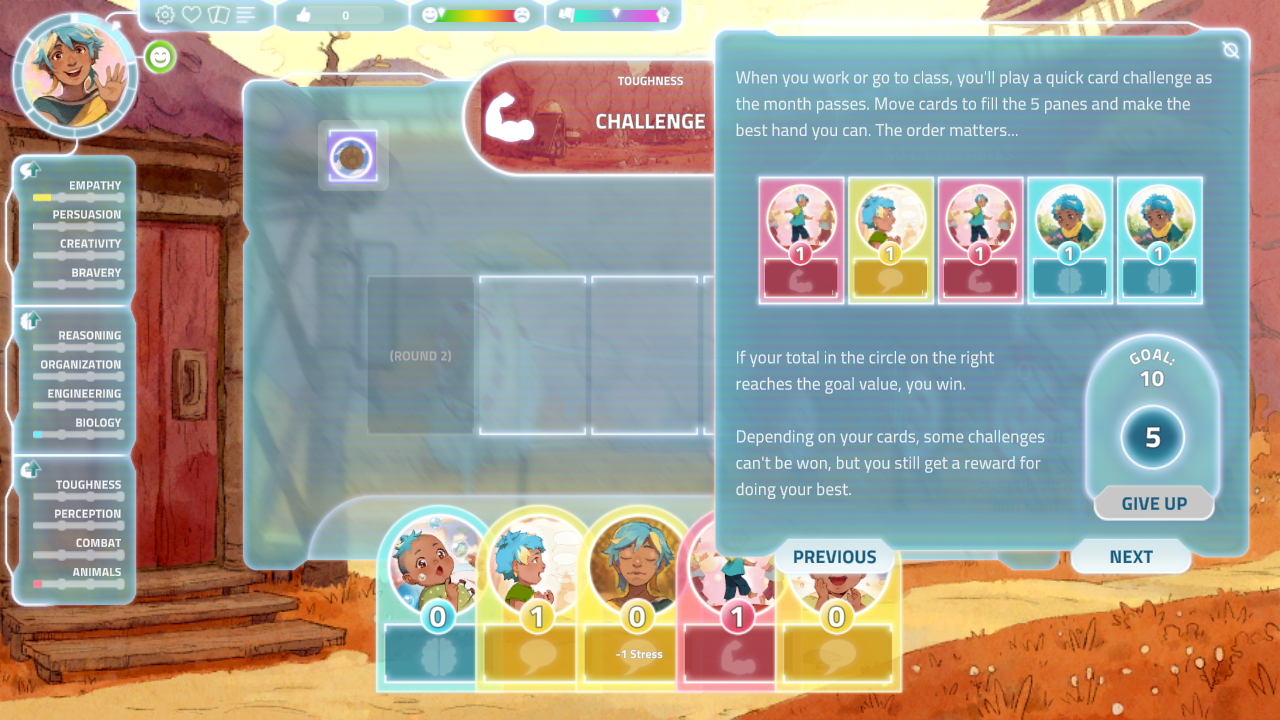 Growing up is no walk in the park, and Teenage Exocolonist does not hold back in exploring all of the ramifications of being a child on an alien planet. In my brief playthrough of what are merely the first few years of in-game time, the game fully tackles the inevitability of death and trauma in a dangerous world. As a child, many of the adults attempt to shield or withhold truths about the dangers of the outside, and it is clear that at some point you can potentially rebel against these pushes.

I am not sure if this was scripted purely for this early iteration of the game or was an actual influence to the gameplay because of something I have done, but a character outright died in my playthrough and it certainly took me off guard and struck me with fear! I quite like the stakes the game has set up early. Introducing death at the forefront of the game reminds you of the urgencies of your own survival, and shows how your actions can influence the survival of your whole community by hurting or helping others. 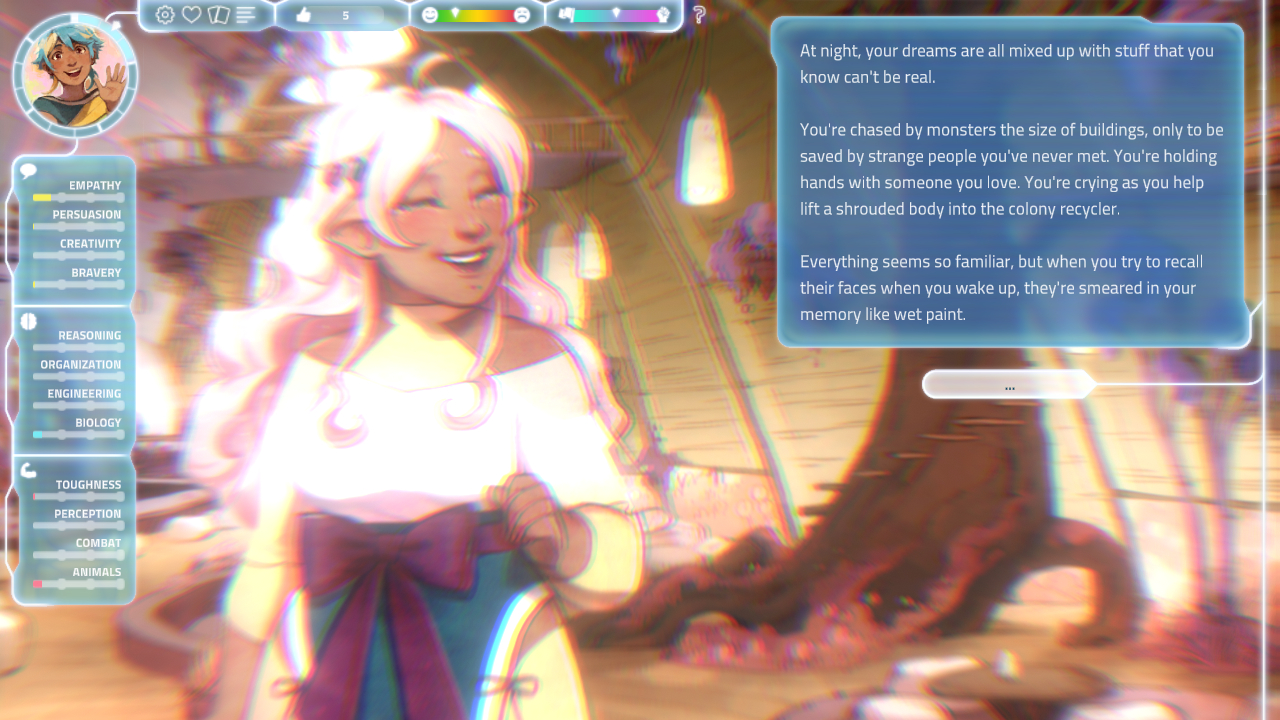 And although such features are becoming more commonplace and accommodating to all players, it is always encouraging to see a game that allows constant changes in accessibility at any point of its duration. For instance, although you cannot fully change your character’s portrait down to any particular detail, I Was a Teenage Exocolonist allows you to set your pronouns, which can be changed any time.

With a whole lot of story and possibilities to explore, I look forward to seeing how I Was a Teenage Exocolonist will both challenge and allure me in all the right and wrong ways to possibly grow up.

I Was a Teenage Exocolonist is currently still in development and will be available for both PC and Mac on Steam.