Review: Wytchwood Is Easy But Not Accessible 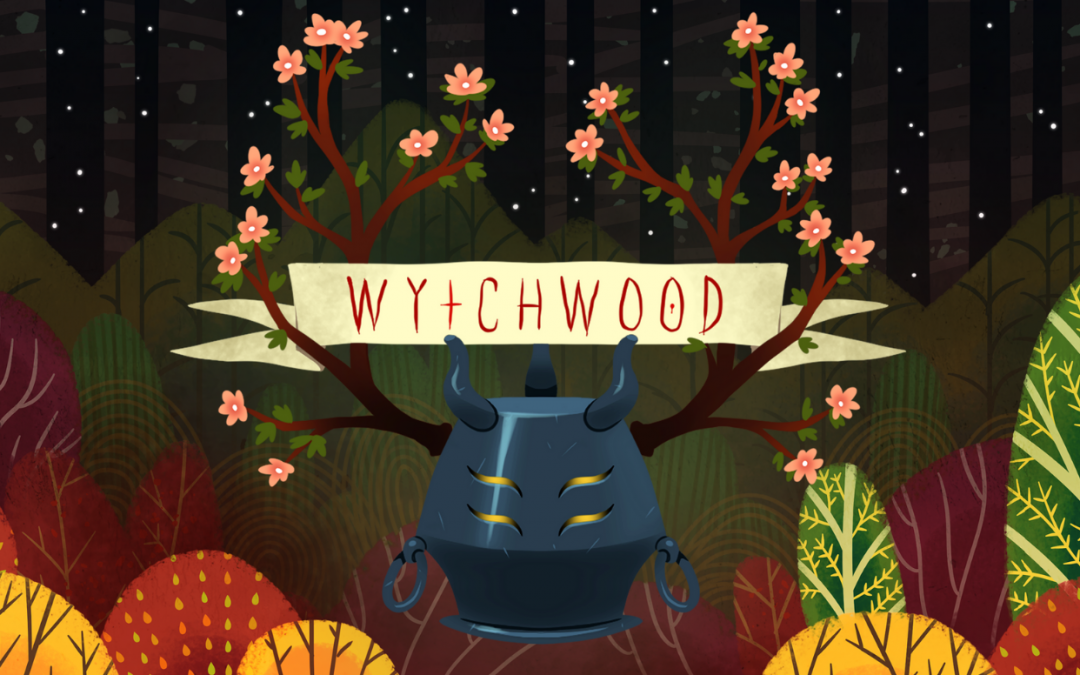 Sidequest was provided with a copy of Wytchwood for PC in exchange for a fair and honest review.

Recently, I’ve been thinking a lot about “flare games,” what I’ve been calling games that make good companions when you’re experiencing a chronic illness or chronic pain flare. For me, these games offer an engaging distraction from pain and discomfort without demanding too much from me when my mobility and brain aren’t functioning well. When I heard about Wytchwood, a crafting game from developer Alientrap, I immediately wanted to know whether it could be a good addition to my collection of flare games.

Set in a dark, fairytale-style world filled with anthropomorphic creatures and questionable morals, you play the Witch, dressed in feathers and a strange helmet. She’s awoken from a nap by a troublesome black goat and finds that she’s unable to remember much of her pre-nap world. The goat tells the Witch that, once upon a time, they made a deal, and now it’s time to uphold her end of the bargain. She must collect twelve souls across the game’s many sprawling environments, like The Forest, The Swamp, and The Village.

To collect each soul, the player must first complete a series of smaller quests, all of which revolve around collecting or crafting specific items. Each environment is home to different resources, which must be harvested to craft potions, spells, and charms. At the start of Wytchwood, your grimoire has been torn up by that pesky goat; over the course of the game, you’ll rebuild your recipe collection through exploration. Early recipes are simple, requiring a couple of different raw materials found in the wild, but soon enough they require you to craft other recipes alongside a raw material or two. A more complex recipe might ask you to craft two other recipes, which may themselves need you to craft a recipe!

As a result, you spend a lot of time running around different regions to collect materials. Each area has a portal to a simple hub level, where you can travel between regions or return to your home area when the story requires it. Each area is also connected to one or two others—for example, The Forest is connected to The Swamp and The Fields. However, each level is generously sized and only holds a single portal to the hub world and a couple more paths at the edge of the screen. The game is gorgeous, with a beautiful, vaguely gothic storybook aesthetic that makes exploring each level a treat, but it’s not enough to make up for how tedious all this traveling feels. 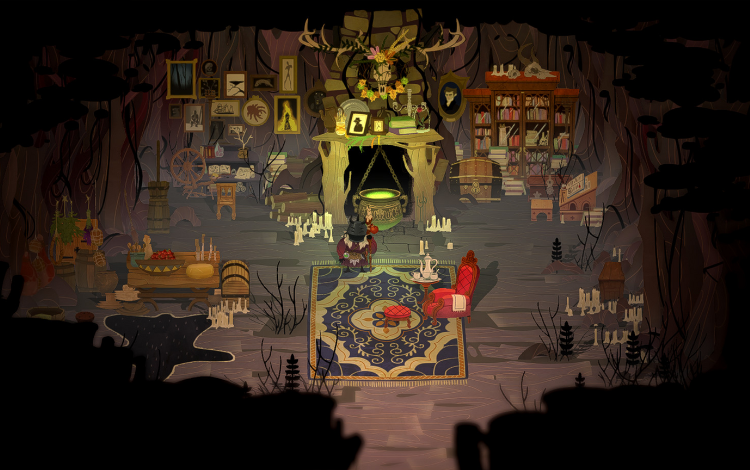 As a crafting game, I was expecting repetition—in fact, I was looking forward to embracing it. Gentle repetition, like in Animal Crossing or Cozy Grove, can be soothing or almost meditative, which is ideal when experiencing increased brain fog during a flare. In Wytchwood, when collecting resources off the ground, like nuts and plants, you press a single button. Occasionally, you might need to use a tool like a pair of shears or a trowel. This sort of repetition is calming and ideal for short, twenty-minute bursts of gameplay, which is great for pacing during a flare or just passing time on a commute. However, with no fast travel, you could easily spend ten of those twenty minutes running between harvest locations.

Unfortunately, this quality of life issue is compounded further by the matryoshka-esque crafting system, which asks you to remember several recipes and harvest locations, in the correct order, with no in-game method for tracking your progress or even marking the recipes you’re currently working on. You can’t organise your grimoire, and there are no built-in subsections to help you out. I worked backwards as much as possible, but it was draining and unnecessarily complicated. While I found the excessive travelling boring, the crafting system is Wytchwood’s biggest flaw to me, someone with executive dysfunction. Suddenly, Wytchwood lost any potential to be a flare game, because if I’m struggling with the mechanics on a good day, there’s no way I’ll be able to manage during a flare up.

It’s a real shame, because one of the main things that appealed to me about Wytchwood came from its publisher’s mission statement. Whitethorn Games describes its team as “believers in accessibility, inclusion, and widening the audience that gets to play,” with a focus on “easy games” that anyone can pick up and enjoy. While Whitethorn Games also states that its games will “make sure you can play” and “never punish you,” the statement doesn’t actually mention “disability” or “neurodivergence” anywhere—even though that’s what disabled, sick, and neurodivergent gamers expect when game devs and publishers say they’re prioritising accessibility. Look, I’m a big fan of “easy” games and of making games accessible to new and non-gamers. Many games that are aimed at abled people with little to no prior experience of playing games can be great for neurodivergent people, too.

As a disabled gamer, if I see a developer or publisher saying that they’re focusing on “accessible” games, then I expect my access needs to be catered to. As a minimum, I expect an acknowledgement that disabled, sick, and neurodivergent gamers and non-gamers exist and might want to play your game. If Wytchwood developer Alientrap had prioritised access features for disabled gamers, they naturally would have catered to abled new and non-gamers at the same time. In its current form, Wytchwood is not a successful “accessible” game, for abled or disabled players. 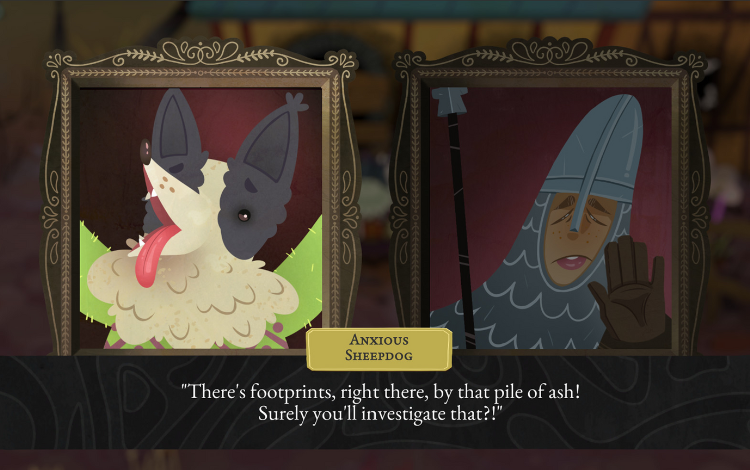 Alongside the issues with travel and the crafting system, the game lacks other basic accessibility functions. For example, it doesn’t prompt you to hold down buttons when required, like when you craft a potion for the first time. I spent the first ten minutes forgetting to hold down the Craft button, something that a brand new gamer might not even think to try. (I remember getting extremely frustrated with a particular game when I was a kid because I couldn’t succeed against a boss; the solution was to hold down a button instead of tapping it, something the game failed to tell me. It took me a week to figure it out.) While you can re-map the entire control scheme on PC, this is the only accessibility setting available. There’s no toggle for holding buttons, which means some disabled players simply won’t be able to play, in direct contradiction to Whitethorn Games’ statement. Button prompts only appear during the tutorial dialogue, not in-world, and all dialogue in the game is text-only, with no text-to-speech setting provided. There’s also an issue with on-screen illustrations blurring and vibrating to indicate a change of speaker during dialogue. This hurt my eyes, could be overwhelming for other players, and again, there’s no way to switch it off.

I’m disappointed by Wytchwood’s general inaccessibility, especially as it’s got so much potential to be an ideal flare game, particularly on a portable console like the Switch. The game has a cosy, weird aesthetic that I really enjoyed, but that jars with the sluggish and overly complicated gameplay. I hope that Alientrap releases a quality of life update that includes functions like recipe progress tracking, as well as specific access features. This sort of functionality improves access for disabled gamers and non-gamers while improving experiences for abled people, too.

I also want game developers and publishers to understand and specify what they mean when they talk about access and inclusion. Yes, we absolutely need more casual games and more “easy” games, but your game fails to be easy or casual when someone is physically unable to play it. Disabled folk with a variety of disabilities, neurodivergence, and lived experiences need to be included at every stage, from developing and designing your game to testing it. I’m tired of seeing us erased from gaming and non-gaming audiences alike. Until we’re prioritised, “commitments” to inclusion and accessibility are meaningless, and games like Wytchwood will continue to fall short.

Update: Alientrap has told us that they’re working on an accessibility update as of January 2022.