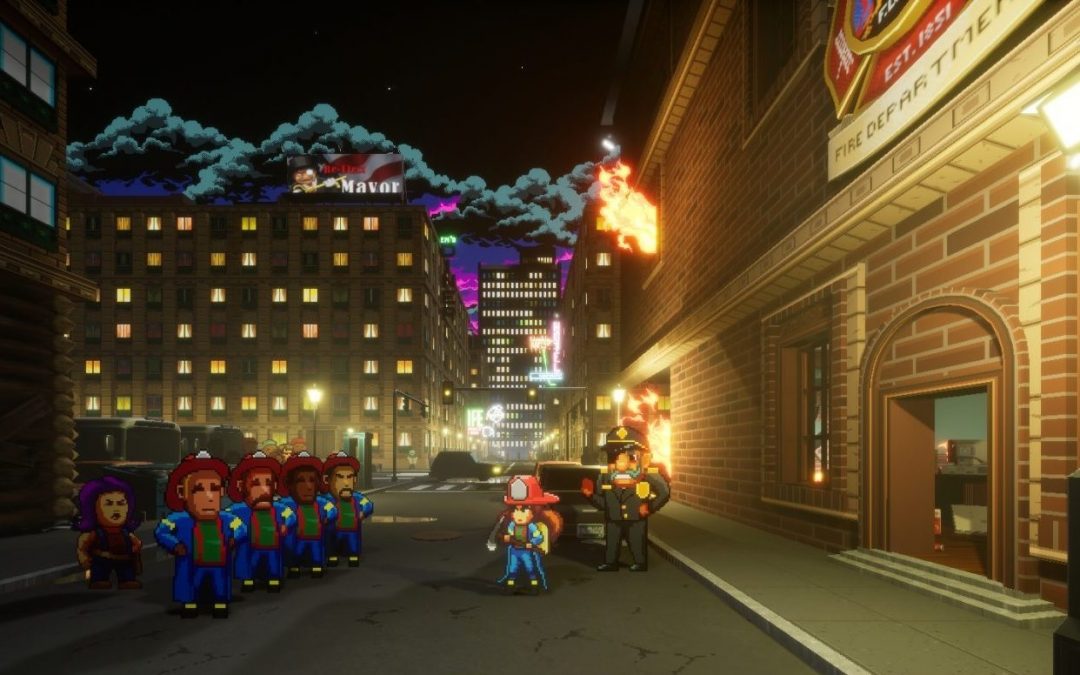 Sidequest was provided with a copy of Firegirl: Hack ‘n Splash Rescue for the PC in exchange for a fair and honest review.

As fires will always keep blazing, someone has to put them out! Following in the footsteps of her father, a young woman takes on the firefighter mantle to put out fires and rescue lives, all while trying to help her local fire station recuperate from its dilapidated conditions.

Firegirl: Hack ’n Splash Rescue is a roguelite, side-scrolling platformer where you play a young firefighter. As the titular “firegirl,” a silent protagonist, you take on various missions that are generated throughout the course of the game.

Using a 2.5D visual style, characters are rendered in a two-dimensional pixelated style while much of the world is rendered three-dimensional, locked in place via a side-scrolling view. You traverse through burning buildings where you must ensure the safety and escape of survivors. Later on in the game, you also have to explore different types of environments, such as conducting a rescue on a train or in a forest outside of the city. Your hose is your primary tool, using it to water down and defeat fire monsters that stand in your way, and to propel yourself in the air so you can jump between various levels in the building. You have both time and water supply limits, but both can be replenished by fighting monsters and through collecting items scattered around the building.

Firegirl is mission-based with cutscenes and dialogue that build out the world. Your hub world is the fire station, which improves in appearance and unlocks new features as you progress through the main story. Faithful to the roguelite genre, all of the mission levels are generated randomly. Room arrangements, enemies, and the types of survivors you have to rescue may be completely different from one mission to the next. 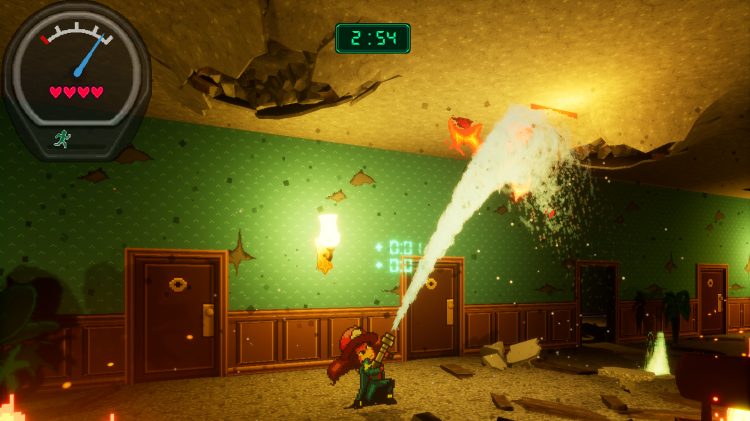 The start of each mission sets up several parameters you must meet in order to complete the level, such as rescuing a certain number of survivors and ultimately getting out of the burning building yourself. How well you do during the mission and conquering optional challenges, like building up a streak of rescuing survivors within a certain time limit, can earn you badges and even fans—prospective viewers and idle citizens apparently witnessing your heroic feats—that can provide perks and stat bonuses.

Where Firegirl falters is, unfortunately, where most roguelites tend to have trouble: balance. Due to the randomized nature of the levels, one mission can be incredibly easy and straightforward while the next will spike dramatically in difficulty. In addition, Firegirl’s hose mechanics, despite being neat in concept, lack polish. Part of this falls on Firegirl’s default control mapping, which is heavily reliant on a standard game controller setup so using anything else is less than ideal. Propelling yourself with a hose requires holding down the assigned button, but you cannot change directions while doing so. Compared to other games’ more flexible jump mechanics, you have to be precise about the direction you want to propel yourself before doing so, otherwise you may not reach where you need to go, leaving you stuck hovering in place.

Due to the randomized nature of the levels, you may also find yourself stuck if you happen to get the wrong arrangement of obstacles. Sometimes, a level is not at all solvable for how much water you have left by the time you hit those obstacles and you will inevitably have to fail the mission. For example, in one level I played, it was impossible to propel myself to another floor, which seemed at that point to be the only path left to find the last survivor and get out of the building. I was unable to aim my jump to get to the next floor because a set of stairs was completely in the way of my arc.

Though these gameplay flaws can be a huge detractor, Firegirl commits to its presentation—and has pretty funny writing to boot! The game uses fantastical elements to craft its grandiose fire monsters, who you face alongside a cartoonish cast of characters. But despite its lighthearted tone, Firegirl does not shy away from commenting on how community services are severely underfunded. It is also significant that Firegirl has you play a young woman without needing to justify itself when, historically, firefighting has been seen as a male-dominated field. (But of course, women firefighters have always existed, even accounting for the lack of early records.) 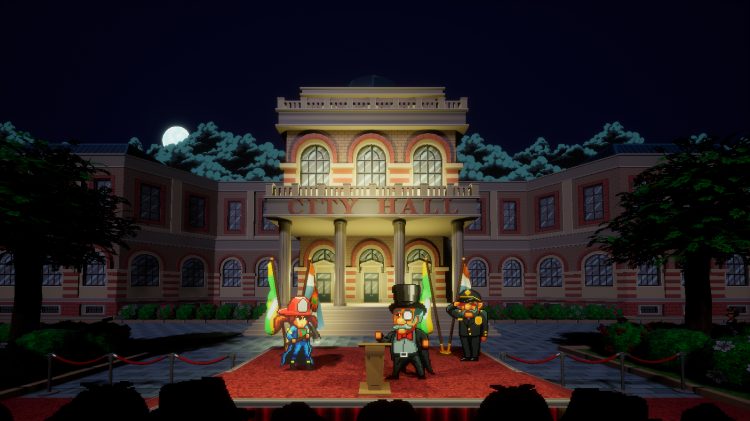 Firegirl: Hack ‘n Splash Rescue is rough around the edges, with pretty frustrating issues around a mechanic that is integral to the game. That said, this does not totally detract from the rest of the experience, with the game’s fun premise, solid presentation, and lighthearted writing drawing you into a rather silly world. At the very least, it is another roguelite title for regulars of the genre to try out and experience for themselves.