After two books that were more concerned with lore than rules (Lost Omens: Legends and Lost Omens: Pathfinder Society Guide) players are granted another crunch-heavy book in Lost Omens: Ancestry Guide. The book is similar in both theme and content to Lost Omens: Character Guide, but does not have a section for factions like the Lost Omens: Character Guide, and instead focuses entirely on ancestries, as its name suggests. As a reminder, one of the biggest changes Pathfinder made in the second edition was to replace “race” with the less-charged “ancestry” to define player characters, so the options covered in this book define that aspect of your character.

Much like the Character Guide expanded on the ancestries from the Core Rulebook, giving them ethnicities and setting-based flavor, the Ancestry Guide does the same for all the ancestries that have been introduced since. Along with expanding on 14 existing ancestries from the Advanced Player’s Guide and Lost Omens: Character Guide, the book also introduces 14 brand new ancestries to the game, all of them uncommon or rare, even in a world of elves and dwarves and fire-breathing dragons. To play the 14 expanded ancestries you need the book that they are originally from, but for easy reference, both the book and page number are provided in each expanded entry. 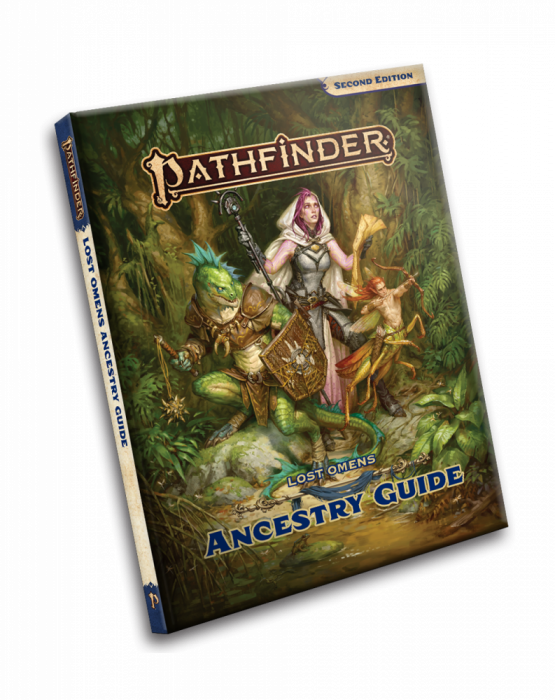 There are two types of ancestry available in Pathfinder Second Edition: standard ancestries and versatile ancestries. Standard ancestries are basic and can be played entirely on their own. These are your standard fantasy ancestries like elf, dwarf, and gnome; but also things a little more unique like tengu or catfolk. Versatile ancestries are the templates that you can mix with any of the standard ancestries to create a mixed ancestry character. These are the half-elves and half-orcs (no longer limited to human parentages), along with options like plane touched aasimars and tieflings. The change from first edition to second includes the ability to apply versatile ancestries to base ancestries beyond just humans. This allows more character customization, and the Ancestry Guide goes into further detail as to how some of the pairings work. A gnome aasimar, for example, may have a halo that glows brighter when they laugh or a musical accompaniment to their voices when they speak. Meanwhile, a tiefling dwarf is likely to be an outcast from their society, with burning coallike eyes. Each of these versatile ancestries has a small paragraph on what they look like when mixed with the ancestries from the Core Rulebook, which is a nice touch. This also gives you an idea of how to play ancestries that are rarer than the standard human mix.

While the versatile ancestries (aasimar, changeling, dhampir, duskwalker, and tiefling) all have excerpts on how they mix with other ancestries, the standard ancestries (azarketi, catfolk, hobgoblin, kobold, leshy, lizardfolk, orc, ratfolk, and tengu) all have ethnicities, heritages, or location-based cultures. For example, the leshy, a plant creature, has five new heritages, including fruit- and seaweed-based ones.

Of all these ancestries, the only one that is not in a previously published Second Edition book is the azarketi. Prior to the Ancestry Guide, they had only featured in a web supplement. This is because the book they were supposed to debut in—Absalom, City of Lost Omens—has been delayed by over a year, as it keeps expanding. That book will finally come out in December, but for now one can use the web supplement to play an azarketi. Azarketi are the descendants of the ancient humans whose civilization was destroyed when magical forces pulled a giant meteor from the heavens. Over the millennia, they have evolved into what are commonly referred to as “gill-men” and have adapted to living underwater. 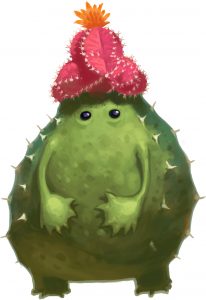 The Ancestry Guide‘s main entries tell you about heritages or ethnicities, providing feats and player options for each of the existing ancestries. There are also little sidebars with additional contextual information about each ancestry. For example, the azarketi entry comes with sidebars on other sea creatures and on the mysteriously manipulative alghollthus (also known as aboleths), who were behind the destruction of ancient Azlant and the enslavement of the azarketi. These sidebars can help a player to flesh out their character concept, like specific settlements different ancestries are likely to be from. In addition, they can also provide hooks for a GM to add to a campaign to make it more immersive to a player, like relationships ancestries have to religions that could make for good stories.

Alongside the expanded existing ancestries are 14 new uncommon or rare ancestries that can be used if the GM deems the ancestry will work within their game. These are all incredibly unique ancestries that can provide their own challenges. Before even describing them, the book gives advice on how to deal with things like PCs who can fly early on, or tiny PCs that can ride on larger players. The new ancestries presented in the Ancestry Guide are:

Of these new ancestries, androids, beastkin, fleshwarps, sprites, and strix are all rare, while the rest are uncommon. While uncommon ancestries are ones that may not fit every campaign, it wouldn’t be a shock to see them on the streets of a major city. Rare ancestries, on the other hand, are such a small percentage of the population that you’re only really likely to see them in their home regions; if you encounter them elsewhere, it’s a big deal.

My favorite new ancestry is the fleshwarp. The idea of a creature stuck in a body they don’t want but choosing a life of heroism anyway is one that deeply resonates with me. I also appreciate that fleshwarps can have origins beyond just being the experiments of mad scientists. Their origin may be due to surges of magic in places like the Mana Wastes, or they may have come across a dangerous fluid in the technological Numeria that caused mutations. Fleshwarps are also interesting because they provide greater opportunities to customize appearance than most other ancestries.

The other ancestry that has a lot of variance is the sprite, an ancestry that actually contains several varieties of tiny fairies. There are six different heritages to choose from, and each heritage represents a different type of fairy. Luminous sprites and pixies are what spring to mind when most people think of fairies, while nykteras are more bat-like in appearance and melixies are insectile. The main reason I’d want to play a sprite character, though, is the first-level ancestry feat Corgi Mount, which is exactly what it says on the tin. You have a Corgi that you ride into combat. Who wouldn’t want that?

The last chapter of the book is very short, just two pages devoted to gear specific to certain ancestries. There are only a dozen weapons here, representing a fraction of the ancestries in this book (and one featured in the next book in this line, Lost Omens: The Mwangi Expanse). I wish this section had more options, or at least more variety, rather than representing only five of the 28 ancestries covered in this book.

Lost Omens: Ancestry Guide provides a lot of new options for players to explore and make their tables more varied and fun. After all, if you stick to just the Core Rulebook ancestries, gameplay can become stale pretty quick.