Lovely. Now imagine you climb down a ladder into a poorly lit basement. You are exploring when you hear the sickening sound of crunching bone. When you turn around, you see inhuman femurs arranging themselves into an impossibly large, impossibly alive golem with sharp limbs and far too many legs. You draw your sword.

Do either of these scenes sound like games you want to play?

Next question. Do they sound like books you want to read?

Welcome to LoreQuest, a series of reading lists connecting you to books that make you feel the way video games do—whether it’s by creating an atmosphere, introducing quests, or exploring questions of character and relationships like some of the games we love. Want us to recommend a book for you based on your favorite game? Just comment or @ us on Twitter and tell us what kind of experience you’re looking for.

In this inaugural post for the series, we’ll look at three books particularly well-suited to those of us who love exploring spooky ruins in games. Each book came out within a year of one another, and though they vary widely in tone, all three take place at least partly in the crumbling edifice of a lost society that was abandoned under mysterious circumstances—and all three reminded me of delving into ancient tombs and temples in video games, solving puzzles and piecing together the mystery of how a once-magnificent structure fell into decay. 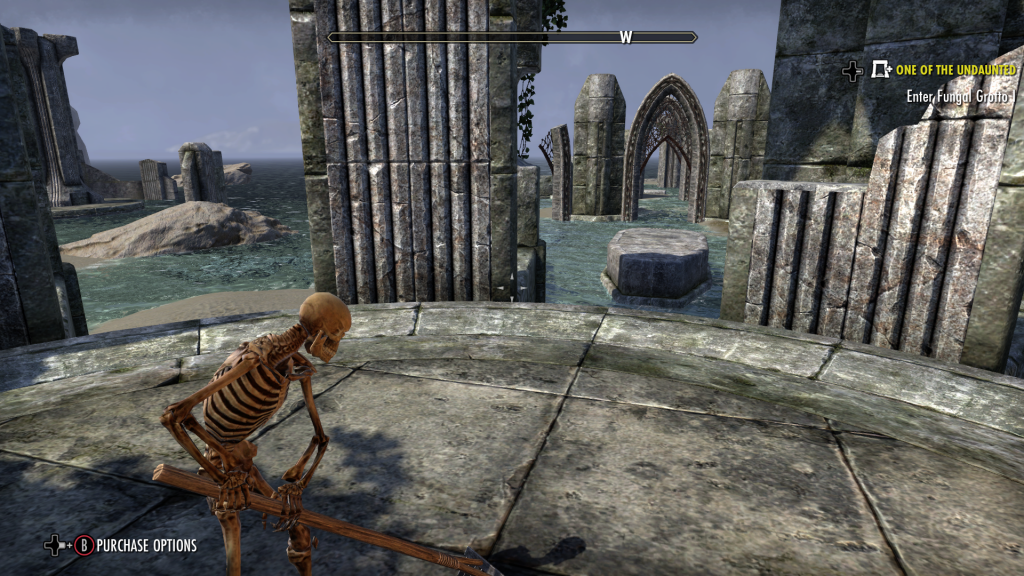 Do what you love (in a sun-drenched ruin by the sea) and never work a day in your life. Image from Elder Scrolls Online.

If you love fishing in games, read:

“Is Susanna Clarke a gamer?” I wrote in my journal after finishing this elegant puzzle box of a book, which bears little resemblance to her previous novel Jonathan Strange and Mr. Norrell except in the mannerly way it revels in beauty and strangeness. In Piranesi, the title character (who is not named Piranesi, but we’ll call him that) lives in a sort of interstitial plane that exists as a throughway between worlds, which takes the form of an endless series of austere halls that seem to procedurally generate like planets in No Man’s Sky: some sheltered and others exposed to the sea and air, all lined with massive statues. Piranesi dwells among them almost completely alone, tracking his exploration in his journals while he cheerfully ekes out his survival in the ruins. Although he doesn’t use the word ruins—his world is his House, brimming with gifts for the mind and body—and he probably wouldn’t use the word survival either.

Piranesi spends his days like a 19th-century gentleman naturalist on a long voyage: he studies marine life, makes tools and clothes from natural resources, charts the tides, and contemplates the beauty of his vast and mysterious surroundings. For a time, Piranesi’s isolated daily peregrinations are disrupted only by the infrequent appearance of The Other, an unnamed character who distributes fetch quests to Piranesi with all the pomp and importance of a main quest-giver (by virtue of being the only other living human in the House). Piranesi is not burdened by the repetitive nature of his tasks; he finds his pursuits noble and rewarding. Critics have called Piranesi a quarantine novel and a novel about chronic illness. Personally, I am reminded of Stardew Valley or the level-grinding and resource-gathering stages of starting a new Fallout or Elder Scrolls character.

If you believe the two genders are “tank” and “glass cannon,” read:

This book is a clamorous pastiche of a phantasmagoric, high-gothic fever dream peppered with delightfully irreverent riffs on Tumblr jokes. In this first volume of the Locked Tomb series, representatives from far-flung planets have been invited to Canaan House to undergo a trial and, if successful, advance to join the godlike Emperor of their universe in his dimly understood forever war. Each planet sends a necromancer—a frail mage who can harness the energy of life and death but usually sweats blood while doing it—and a cavalier, who carries a big sword. It becomes clear very quickly that the pairs have been dropped into a contest for which they do not know all the rules, and they must decide whether to compete or cooperate to win. (Most of the pairs anticipate violence, and proceed accordingly.)

Canaan House is, of course, super haunted: crumbling from neglect and disuse, tended by animated skeletons (unsettling even by necromancer standards), isolated by a vast ocean on an otherwise uninhabited planet. Lacking any guidance, the competitors explore the eerie House and find a few elegantly furnished research laboratories in good condition as well as a creepy murder basement. And then, the contest becomes a locked room mystery when some of the competitors are gruesomely slain. As the survivors race to find out who is killing them—or at least to avoid being killed—the mechanics of their mage/tank teams reminded me of running dungeons in Elder Scrolls Online, if ESO had a great deal more gore and exploding bones. There are co-op puzzles! There are leveling spells!

If you actually built a library in Skyrim – Hearthfire in order to organize your rare lorebooks, read:

The Starless Sea by Erin Morgenstern (2019)

Look, nobody reads the lorebooks in Skyrim. But I did collect them, especially rare volumes or those that I found particularly clever or funny (e.g. Pirates of the Abecean). There’s something very warm and comfortable about having all the books in one place.

That’s more or less the vibe of The Starless Sea: it is a portal fantasy, but beyond that it is a library fantasy of having all the stories of the world kept and cared for in one enchanted archive. The main quest of the book follows Zachary, a shy graduate student (studying video games!) who stumbles across a mysterious book called Sweet Sorrows which, incredibly, includes a story about Zachary himself. The uncanny book compels Zachary to search for its provenance, which leads him into a series of dark academia set pieces: a masquerade, a secret society, painted doors that open onto unexpected places. Interspersed between chapters are short, evocative fairytales from Sweet Sorrows and other in-universe books, featuring owls, innkeepers, and acolytes as well as the recurring symbols of bees, books, and swords. Ultimately, Zachary finds his way into the one library to rule them all: the Starless Sea itself, now nearly abandoned and fallen into disrepair. To save it—and himself—Zachary and his companions draw on all the knowledge and symbols woven into the strange fables they have read.

The author, Erin Morgenstern, has mentioned the influence Dragon Age: Inquisition had on her writing; the ability to make choices and dialogue decisions that profoundly impact gameplay reignited her creative drive and inspired her to make storytelling itself the subject of her book. But this novel might remind you more of pretty, intricate puzzle games like Myst or The Room.

You may well ask what it means that these three recent books all feature a haunted house of sorts. This is the new literature of haunted houses and cursed ruins: not the malevolent single-family home of old haunted house stories, but an architecture of decay that speaks to 21st-century anxieties and uncertainties. These are tales about wandering the wreckage of a failed society, desperate for human connection, knowing that other people pose both your worst danger and your only hope.

But let us not delve too deeply into that idea. LoreQuest out.

Read the rest of the LoreQuest series.