I must confess that the one area of Pathfinder in which my knowledge is severely lacking is the Pathfinder Society, both in the in-universe organization and in the eponymous Pathfinder Society Organized Play campaign. When I was most actively playing the game, I did so in home games and lived in a small city in a rural state, so there weren’t a lot of options for organized play. To this day, I’ve only played in two sessions of Pathfinder Society play, and they were at back to back days of a convention in 2014. It is, however, something I look forward to engaging in in the near future, so Pathfinder Lost Omens: Pathfinder Society Guide is very useful in giving me the background I need to start playing in those games.

The Pathfinder Society Organized Play campaign is a global, interactive, evolving, ongoing campaign with sanctioned rules and GMs that anyone can jump in and play. Most of these games are played at conventions or local game stores, but in reality, a sanctioned GM can run a Society session any time. Sessions fall into two options: Pathfinder Society scenarios and bounties or Pathfinder Adventures and Adventure Paths. 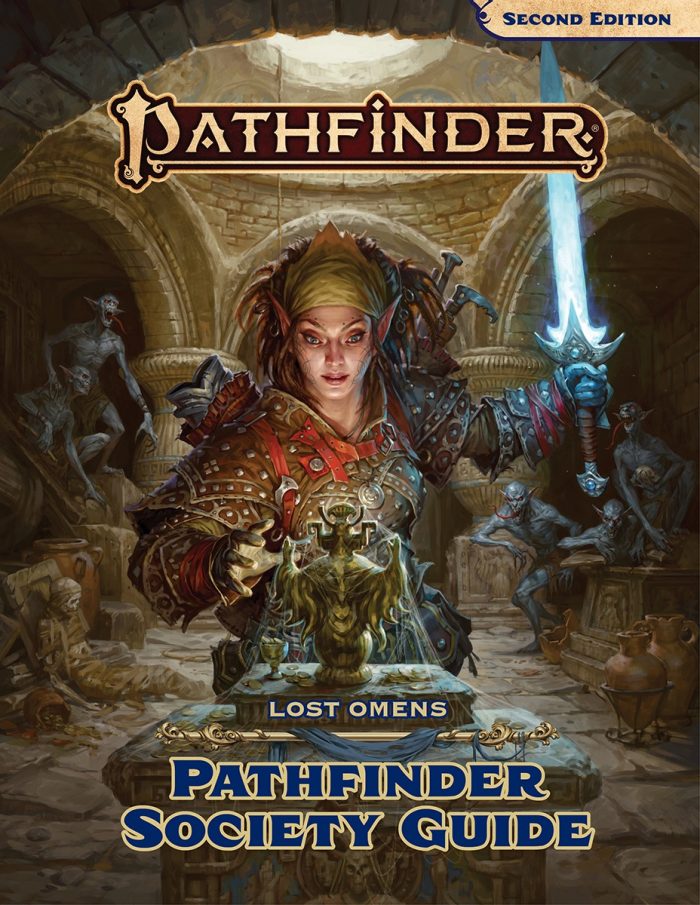 A Pathfinder Society scenario is a shorter adventure that can usually be run in a single game session of four to five hours, where the players involved are members of the eponymous Pathfinder Society and doing quests for the benefit of the organization. Some of these adventures are tied to a specific time period of the organization’s history and can only be played by a single player once, while others are repeatable scenarios that can be played by the same player with multiple characters. Society bounties are even shorter and typically can be run in about an hour. For the purposes of scenarios and bounties, all characters must follow the guidelines set out in Guide to Organized Play: Pathfinder Society during creation.

Options in Society play are more limited than the core rules, to both make the game a little more balanced and to make sure that the game is enjoyable for all involved. One key thing is that evil player characters are not allowed, since they can cause a lot of strife in a game where they’re not expected, and with Society play, there’s a high likelihood of playing with people you’ve never even met. Another rule of Society play is that you have to be able to prove ownership of any options that you use to build your character. While the rules are all posted for free on Archives of Nethys, to participate in Pathfinder Society you must own the book in which the rule is printed, either via hard copy or via watermarked PDF purchased from Paizo’s website. There are two exceptions to this rule. The first is that options from the Core Rulebook, Bestiary, and Lost Omens: World Guide are all available to any player regardless of ownership. The other exception is that Paizo offers pregenerated “Iconic” characters from the Core Rulebook and Advanced Player’s Guide to be used by anyone. If you play using one of these pregenerated characters, you can then apply the experience and boons to one of your registered characters.

If you don’t want to be restricted to the formal Society rules, you can partake in sanctioned Pathfinder Adventures or Adventure Paths. These are the other published modules Paizo puts out, either in the standalone Adventures line or in the long-running campaign Adventure Paths. You can play these adventures just how you normally would, and at the end of a given book, you’ll be given a Chronicle Sheet to apply certain bonuses and boons to one of your registered Pathfinder Society characters as though you’d used one of the pregenerated characters in a Society scenario.

Over the last twelve years, the Pathfinder Society Organized Play campaign has grown, with yearly storylines that culminate in epic finale events at GenCon while the next year’s storyline launches at the same time. Each season is approximately 25 scenarios long, and many of them tie in thematically to one of the published Adventure Path campaigns of that year, usually the one that launched with it at GenCon. For example, while home games were embarking on a quest to banish the demons of the Worldwound in Wrath of the Righteous, the Society players were exploring other parts of the Worldwound and protecting a ruin they discovered there.

The book serves as both a history of the in-world organization and a primer on the roles of its membership. The first chapter of the book is an introduction to the Pathfinder Society. It first gives a brief overview of what the in-universe Pathfinder Society is (with a sidebar explaining the Organized Play campaign as well). In-universe, the Society is a group of explorers, scholars, and adventurers who are essentially a widespread archeological group. The goals of the group are to “Explore, Report, Cooperate,” and the aims of the individual members are to make a find large enough to be published in the printed Pathfinder Chronicles that record the deeds and discoveries of the membership.

After the introduction are several pages devoted to the history of the Pathfinder Society in Golarion, including a sidebar timeline of important events in the organization’s history. This is good background on the formation of the group, but more importantly, it describes the recent events that had happened over the last eleven years of the Pathfinder Society Organized Play campaign.

After the history are another few pages describing how to become a member of the society and what life as an agent is like, including things like common sayings among the group and what the leadership of the group is like. The Pathfinder Society is led by a group of ten masked individuals who call themselves the Decemvirate. Tradition has held over the centuries that their identities be secret, but at the end of the last season of the first edition version of the Pathfinder Society Organized Play campaign, one of the ten unmasked herself. She was revealed to be a notable Venture Captain (the field leaders of the Society) by the name of Eliza Petulengro.

Sprinkled throughout all sections of the book are player options, starting with a selection of backgrounds that are perfect for a new Pathfinder Society member. These backgrounds include the “Archaeologist” background, which I was surprised wasn’t an option in the core book, considering it’s the starting point for many an adventurer. These backgrounds can technically be used by any character, but they are specifically meant to be good fits for aspiring agents of the Society.

The second chapter presents one of the most notable changes from the previous edition to the new edition—the presentation of how the various factions of the Pathfinder Society work. In the previous edition, several of the factions were region-based, and many of them came and went over the years and events of the campaign. At the time of the edition change, playable factions were: 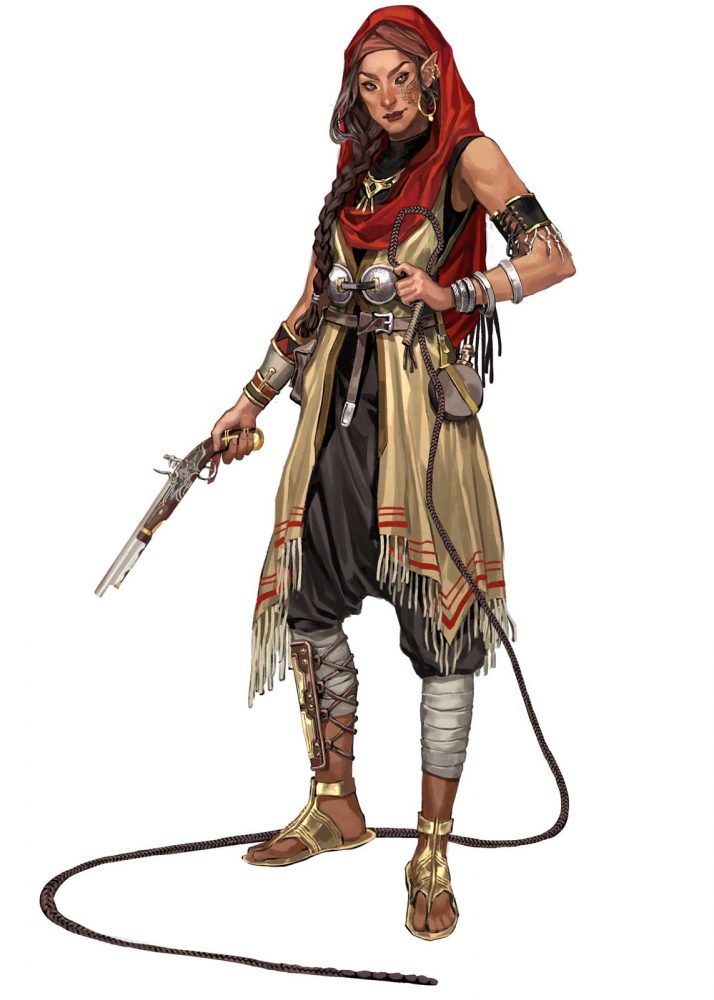 Each of the new factions also provides equipment specific to the goals of that faction. For example, the Envoy’s Alliance has a way to preserve a fallen comrade so that they may be brought back to life, while the Vigilant Seal has a chest that seals dangerous artifacts for safekeeping.

Along with the factions, there are four paths of study available to aspiring Pathfinders, each focused on a different discipline important to adventuring. The Scrolls focus their efforts on studies and are the historians and lore keepers of the Society. The Spells focus on magical training and thus support firepower to their allies. The Swords are the front line of the Pathfinder Society and hone their combat skills above all else. And of course, if none of these works for your character, you can be a generalist who learns a bit from each.

The third chapter devotes space to the bases of operations the Pathfinder Society has throughout the world, known as Pathfinder Lodges. Each primary Lodge has a write-up describing the history of that Lodge, the Venture Captain who leads them, and what operations from that specific locale may look like. Each also has a piece of equipment specific to that location to allow more flavor to characters based in each. My favorite of the Lodges in this section is the Grinning Pixie, a mobile lodge that is actually a three-mast carrack. It’s also unique in that the post of Venture Captain is rotated frequently to try to avoid any one agent from getting too attached to the ship and trying to steal her for their own.

The last chapter of the book is devoted to player options in addition to the ones sprinkled throughout the other chapters. This includes specific Pathfinder Society gear like false manacles and a wax key blank or magical items like Spectacles of Understanding—glasses that allow you to read any language once per day. There are also feats specific to Pathfinder Society training and services that can be provided by the Lodges. But most importantly, there is information on the wayfinders of the Pathfinder Society and how they interact with aeon stones. Wayfinders are magical compasses gifted to a newly minted Pathfinder agent. Each wayfinder can attune to aeon stones that both hide the magical rock from view and provide extra powers beyond the normal bonuses given. Aeon stones are magic stones that typically orbit your head and provide a bonus. The drawback of having the stone orbiting your head is severe, since they are extremely valuable and make you an enticing target. Using a wayfinder to hide an aeon stone removes this drawback and makes the stones far more useful.

In the end, I was the perfect audience for this book, as I was one of the people overwhelmed by the history of the in-world organization and found that to be a barrier to entry for playing in the Pathfinder Society Organized Play campaign. Pathfinder Lost Omens: Pathfinder Society Guide gave me the information I need to entice me to keep looking at the past events, and to prepare a character for the future when I can find a table to join.