My initial reaction on hearing “You have to play this game I invented” is trepidation.

Sorry. Really. Sometimes homemade games are great. Sometimes they’re… less great. It can be hard to grasp the rules of a game still in the process of being made. Explaining takes ages, especially without formalized rules. Not everybody believes in playtesting their homemade game. Also, have you played Hand and Foot? That game has formalized rules and I still have no idea how to play it.

So when my cousin’s husband suggested we play his homemade game, I laughed a little and said, “Well, okay.” My trepidation wasn’t helped by my cousin’s long-suffering, “Oh boy,” suggesting they’d been through this many times before.

I won’t describe the game itself, because (sorry to spoil my own article, but the game is quite good) they hope to patent the design someday. Suffice to say, it involves dice and a flat surface and some accoutrements stolen from other games. I chose my dice set and did a few practice tosses, confirming that, even without knowing where all this was going, I was going to be terrible at it.

The rules are complex on first explanation. The gist is simple—roll dice, slide them across a table, and accrue more points than the competition through skill or by introducing chaos and screwing everyone else over—but there are a series of mechanics based on the rolls that can rapidly change the course of the game. I barely remembered a thing as it was explained to me, other than that I must both roll and slide the die on my turn, but, as with most games, I eased into most of it without a lot of fuss. Sure, I was going to have to ask for the rules roughly 80 times as we played, but getting into the play, actually doing it, was the best way to learn.

I can’t explain what’s going on in this photo, but trust me: I’m doing terribly.

And you know what? It was a blast. The mechanics themselves were fun, mixing skill and luck to create surprising narrative twists in a game entirely without narrative. I proved reliably bad at sliding the dice, but when I stepped away after each turn to have a chat with my grandparents, luck went my way—suddenly I was not only in the lead, but I actually won the game. It was a real underdog story, dashed entirely in our next game, when my grandma and I decided that we wanted to invite as much chaos as possible. We didn’t win, but we had fun causing problems within the confines of the game. 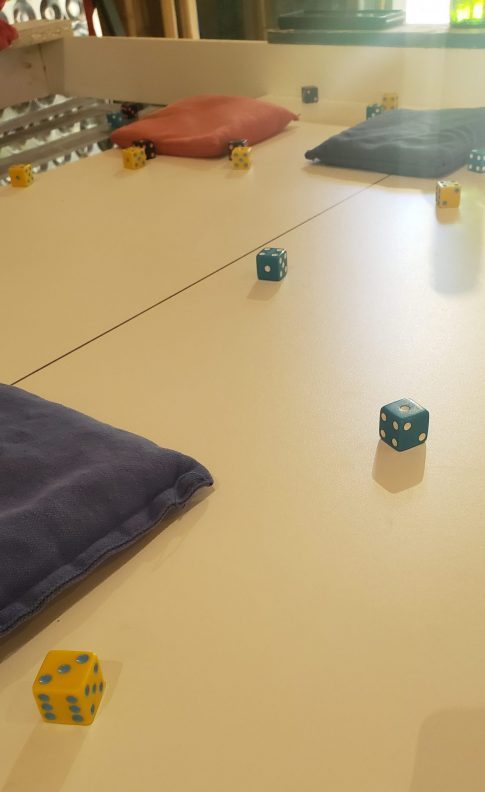 More vague evidence that I’m terrible at this game.

But even more than that, play became not just the actual act of following the rules, but establishing them. Because this game, while well-developed and balanced, isn’t quite finished. It’s still in the playtesting and prototype phase and requires a good amount of feedback to help it evolve into its final form.

I was the first player to slide my die with such force that it leaped off the table and disappeared into a dark corner, which meant we had to invent a rule to solve that on the fly (I lost my turn). My grandma was the first person to (accidentally) land a trick shot, and my cousin suggested that if she landed it again, she’d double her score (she did not). My husband suggested a revision to a particularly confusing rule that mostly served to make things more confusing, but even the curiosity about what would happen when we tweaked something was as exciting as playing the game itself.

As I’ve discussed here before, collaboration and playing with or against the rules is something I love about games. In this game—in my cousin’s workshop, with stacks of multicolored Chessex dice on a custom table—the fun was playing the game, sure. But the fun was also the suggesting, the tweaking, the stumbling into questions that didn’t yet have answers and getting to be the one to answer them. The experience was based on what-ifs. What if we radically changed an established rule? What if we replaced one color die with another? What if we made one particularly thorny rule optional in its entirety?

It was exciting to be the person to make a change that stuck, certainly—to know that I was having an impact on what might become the final version of this game. But more than that, the joy of playing this in-progress game came from creating and inventing something with others.

If this game ends up being something we can purchase and play down the line, I’m sure we’ll have lots more fun with it. But I don’t know that anything will compare to building it on the fly, to inventing rules and testing them and throwing them away if they don’t work. It’s the kind of energy I’d like to bring to more tabletop and tabletop-adjacent games I play at home—exploring the fun in homebrew by trying (and sometimes failing) to make games my own.