The pantheon of Golarion has always been something I’ve greatly enjoyed. So many of the gods and goddesses have such unique motivations and personalities, and all of them provide great roleplaying opportunities. Most often as a player I tend to lean towards the cleric and champion classes, which are undivorceable from in-game religions. This may seem bizarre since I’m agnostic in real life, but the point of the matter is that I think these fictional gods give me more to worship and love than any deity that exists in our day-to-day existence. 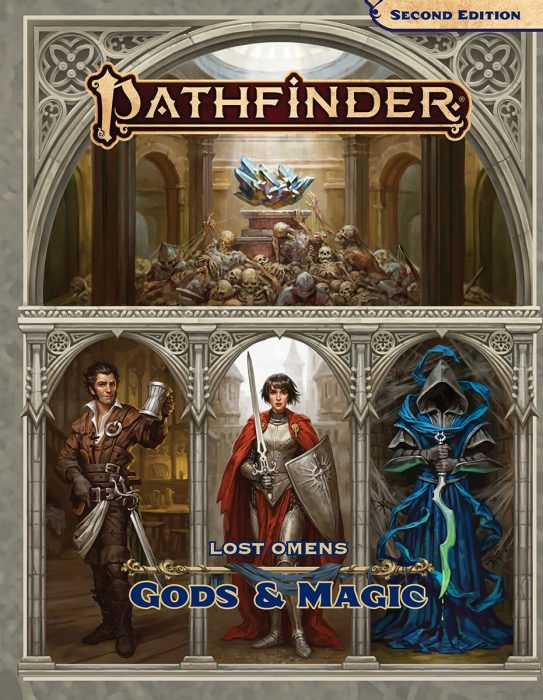 While I love the content in Lost Omens: Gods & Magic, for information on the deities themselves, I’d be remiss to not recommend Inner Sea Gods instead. It’s not that the content in the Second Edition book is bad, but there is much more of it in the previous version of the book. While this edition has two-page write-ups for each main deity, Inner Sea Gods devoted eight pages to each, and while some of that information is not rules agnostic, most of it is.

One thing to note is that since a variation of this book has been printed in all three rulesets that Pathfinder has used, there’s quite a bit to compare and contrast. The first version of the book was the smallest, coming in at only 65 pages with the same two-page dedications to gods as the newest edition did. Inner Sea Gods, however, was 335 pages and contained troves of information that don’t make their way into the new Lost Omens: Gods & Magic. Even the opening stat blocks for each deity contain different information, as the previous two versions focused on things like where in the world the deities are most likely to be worshipped, their favored weapons, and their primary domains. Most of that information has now made it into the Core Rulebook, so the stat blocks here contain information like a deity’s allies and enemies among the other gods, and what realm of the outer planes they make their home.

It’s worth taking a moment to compare the actual content in the main deity writeups, so I’ll take a look at my favorite of Golarion’s main pantheon: Desna, the Song of the Spheres. While Inner Sea Gods provided you with information on things like her holy days and texts, the new book just has a page and a half on her origins and mannerisms. The small section of new rules for Pathfinder Second Edition is three boons and three curses that Desna may bestow upon those that please or upset her, respectively. As the goddess of luck, one pair of these affects your die rolls, either allowing or forcing you to roll multiple times.

While there is not a vast amount of new information, one thing that I do really like is that Gods & Magic took some space to codify some of the interpersonal relationships that the deities have. Desna’s relationship with the sun goddess Sarenrae and the goddess of love and art Shelyn was previously remarked on thus: “Desna’s only true sources of comfort among the deities are Sarenrae, who tends the wounds she receives in battling the evils of the night, and Shelyn, who reinvigorates her spirits and creates new wonders to be explored.” Now, the new edition codifies them as lovers, complete with a stunning piece of art showing the three spending some downtime together. 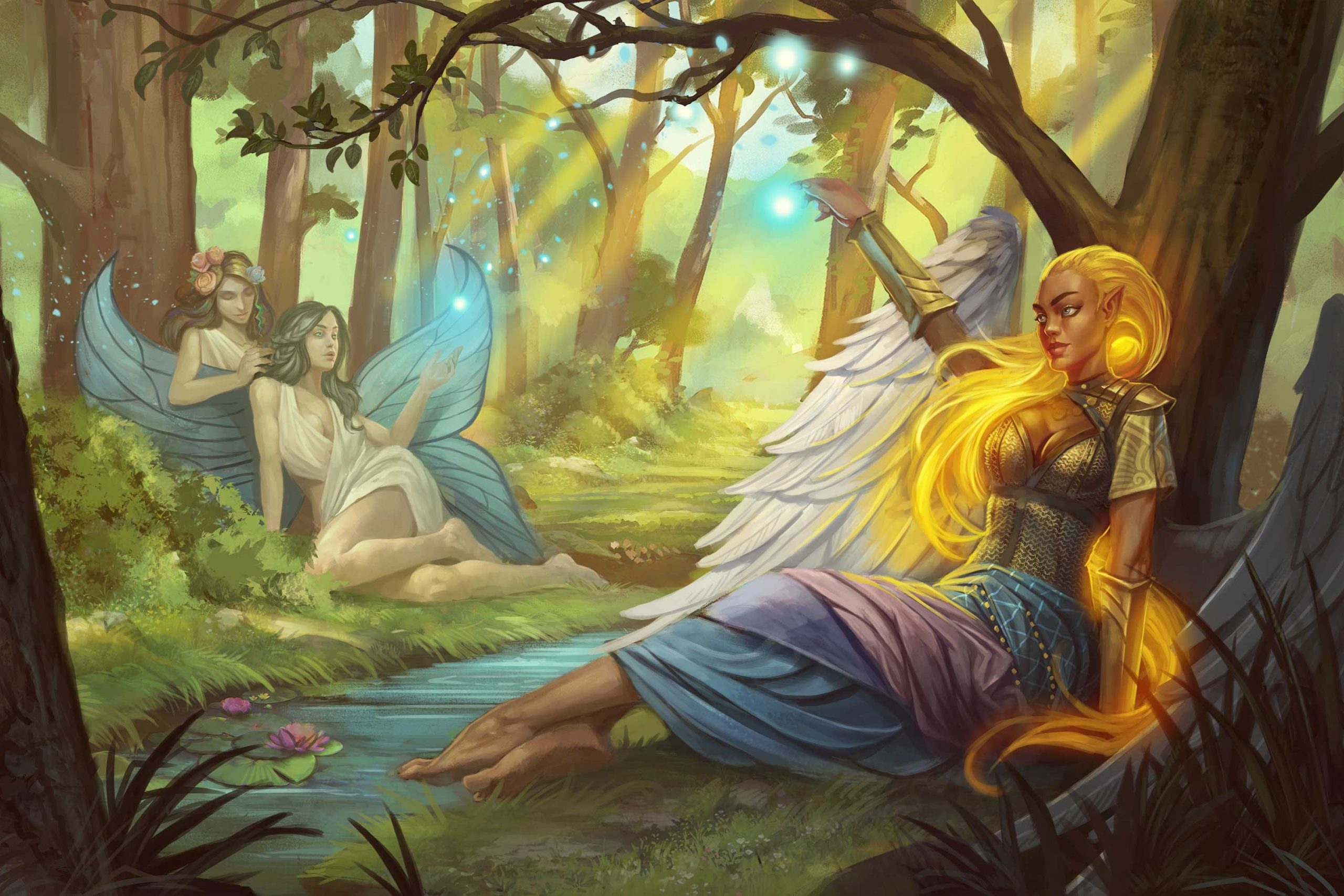 One of the two places wherein Lost Omens: Gods & Magic is more useful is that lesser deities and demigods both get more space in this edition. The previous book had half-page write-ups for 14 lesser deities, while this edition expands these to full pages, and includes six additional deities. There are also three brand new deities to the setting, based on events from the past ten years of published campaigns. Several gods from other regions of the world are also included, to provide even more diverse pantheons. However, even these lesser deities had a higher page count in the previous edition, just not in Inner Sea Gods. There were two smaller supplemental books (Inner Sea Faiths and Faiths of Golarion) in the previous edition that provided larger write-ups for all but the three new deities that are in the minor gods section of this book.

The three brand new deities are Arazni, Casandalee, and Nocticula. In the previous edition, Arazni had been considered a dead deity, risen to undeath and enslaved by the wizard Geb. After the events of Tyrant’s Grasp, she has reclaimed godhood, albeit with a much-changed portfolio. Casandalee is the goddess of artificial life, who ascended to divinity after the events of the Iron Gods campaign. Lastly, Nocticula spent the majority of the last ten years of the setting growing and moving away from her role as the queen of Succubi and into a role of redemption and hope. This is the most significant of changes codified in Lost Omens: Gods & Magic, but it was a long time coming. Nocticula’s ascension was first hinted at in the supplement Lords of Chaos but given much more light in the campaigns Wrath of the Righteous and Return of the Runelords. This development shows that redemption for even the evilest of souls is possible within the setting, and I think that’s an incredibly powerful thing.

There’s also a lot more room given to demigods like demon lords and great old ones in this book than there was in the previous books, but again, they also have gotten longer entries in supplemental books like Book of the Damned or Chronicles of the Righteous. For example, while Arshea, the empyreal lord of freedom, gets two paragraphs in Lost Omens: Gods & Magic, she gets a full page in Chronicles of the Righteous. Including these entries in this book is a good way to get more eyes on them, though, and that’s important to show the robustness of the setting.

After all of the write-ups on gods and demigods is a small chapter on various different religious philosophies. This includes the God Calling of ancient Sarkoris, which involves summoning a powerful being to be a constant companion to yourself, a thing that is given rules in the summoner class in Secrets of Magic. These are philosophies that are less tied to any specific deities, but more tied to concepts or ideals. One of these that is very unusual is the entry for Atheists, since this is a world where the power of gods is a quantifiable product; the entry goes on to describe Golarion atheists as people that may believe gods exist, but that they are not inherently deserving of worship.

I’ve said that I found the book to be a little disappointing in terms of new information on the gods, but for a new player, the information that it provides is a good intro into the various deities that exist in the world of Golarion. Gods & Magic gives new readers a good basic history of the gods in question, along with some good information for how to roleplay a worshiper of them, like their sacred colors and animals. I crave more, because I already love these gods, but this is a good start to get someone to start loving them.

However, the real reason to give this book a look if you’re playing Pathfinder Second Edition is for the player options in chapter five. The fluff in both this book and previous editions is rules agnostic and can be used in any game, but the rules presented in earlier books don’t work with the new edition. Whether it’s new feats that allow your character to pretend to be pious when they actually aren’t, or new domain options to open wider worship of your character’s god of choice, there are dozens of new rules for religion-based characters in this book.

There are also a handful of magical items included in the book, including the bottomless stein for worshipers of the drunk god Cayden Cailean (he became a god as the result of a drunken bar dare, he remembers none of how, it’s a thing). Desna’s magic item is a blue rabbit’s foot, signifying her role as the goddess of luck.

If you want to play a pious character in a Pathfinder Second Edition campaign, I think this book is a good purchase. If you’re looking to learn about the gods of the setting, it may be a little disappointing. That said, while the write-ups for gods are smaller than I’d have liked, and I know of other sources for the information, compiling this many gods into one book is still an impressive feat since all of the other books needed to get good information on them will run you well over $100, even in PDF form.