I Am On the Fitness Boxing to Powerlifting Pipeline 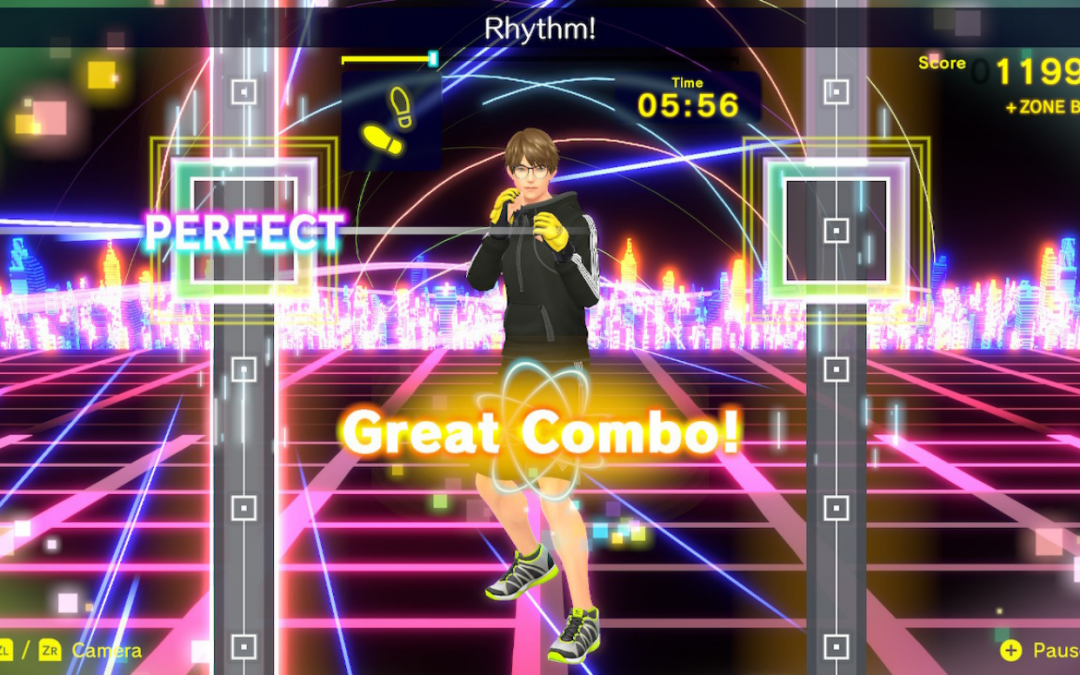 “Think you could lift 185?” Anthony, my partner in life and in gym, asked me, only half joking.

“I don’t know,” I said. I sized up the barbell, the colorful blue and green plates sandwiched on either end. The weight room was emptier than usual; late Friday evenings aren’t the most popular gym time (surprising, I know). “Maybe.”

We didn’t have anywhere to be aside from the gym, so why not? I stepped up to the barbell and took my stance: feet shoulder width, toes pointed slightly outward, knees bent, hands on the bar just outside my calves. Next, flatten the back, keeping the hips angled slightly down, activate the lats, and pull up with the chest first to keep the arms from doing any work.

When I started playing Fitness Boxing on the Nintendo Switch, I didn’t have any secondary motivation. I wasn’t trying to have fun, to better myself or my cardiovascular health, or even to break the monotony of a pandemic year of so much (so. much.) sitting. No. When I started playing Fitness Boxing on January 6, 2021, the day armed far-right insurrectionists stormed the U.S. Capitol, I was just really, really in the mood to hit something.

When I started playing Fitness Boxing on January 6, 2021, the day armed far-right insurrectionists stormed the U.S. Capitol, I was just really, really in the mood to hit something.

What I could not have anticipated when I booted up the brightly colored game with its cheerful, boppy soundtrack, was how Fitness Boxing (and its sequel, Fitness Boxing 2: Rhythm and Exercise) would actually change my life. I was what the Centers for Disease Control would call a “very active adolescent,” but aside from brief forays into jogging, cycling, and weightlifting, I didn’t remain particularly diligent about exercise throughout my twenties thanks to the usual excuses. I had no time, gym memberships are expensive, what am I even supposed to be doing at a gym anyway, I guess I’ll try running instead, wait no, running makes me want to die.

I expected little of Fitness Boxing beyond quelling my anger, which it did. It also made me want to keep playing, which I did, though I eventually purchased Fitness Boxing 2: Rhythm and Exercise for the quality of life updates. I started rotating yoga into my week for strength and flexibility. Over the next few months I fell into a routine: three times a week I would shove the coffee table out of the way (or as out of the way as possible in our small apartment) and straight-hook-uppercut combo my way through the hour after work, or my lunch break, or, if I was feeling particularly awake or motivated, the early morning. On at least one non-boxing day I’d try to do yoga.

By March, I was easily able to keep up with Fitness Boxing 2‘s “No Mercy” difficulty mode; by May I was strong enough to hold a side plank and take the tree pose variation without toppling to my mat. The silly little boxing games had achieved what no magazine, class, membership, or fitness influencer could. I was invested in exercise because it was fun, because it made me feel strong. And even though I didn’t start out trying to break up the very monotonous cycle of working from home, making dinner, going to bed, and waking up to do it all over every day, it felt good to move my body. I started looking forward to it. Even though I didn’t know it yet, I was already in the Fitness Boxing to powerlifting pipeline. It’s a very niche pipeline, but still.

I lifted and the bar, loaded with forty-five and twenty-five-pound plates, went up. The first thing to falter was my grip, and not, as I had feared, my muscles or, God forbid, my spine. At the top of my lift I held the bar for a split second, victorious, and lowered it most of the way down before letting it land with a clash of metal. I turned to high-five Anthony, overcome by a strange, primal joy. After four sets of power cleans and deadlifts, I should have been exhausted, but my body thrummed with adrenaline. It was the most weight I had attempted to lift by fifty pounds. Anything felt possible. 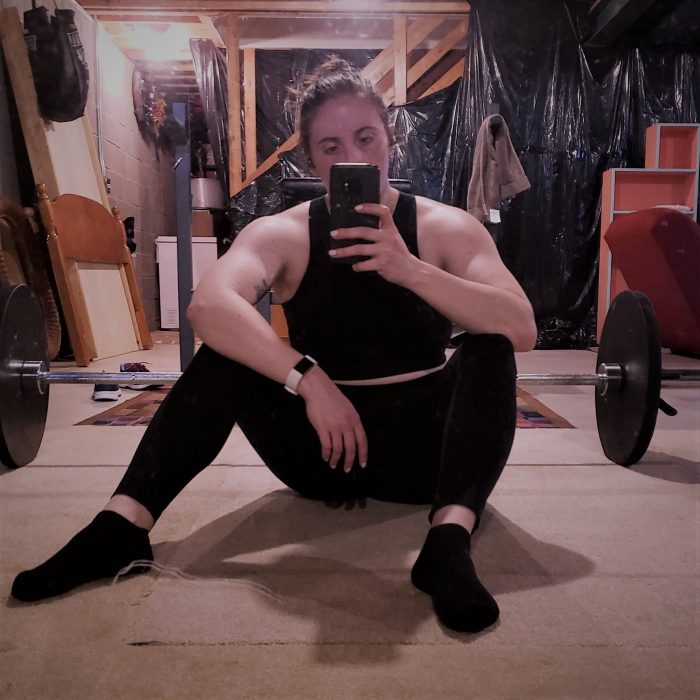 Can you tell it was arm day?

After I graduated high school, the era of youth sports ended, and I began to resent the fact that my body needed maintenance and care to function. Even more so, I resented that it should take so much effort. Is existence itself not punishment enough?

Though I had been playing Fitness Boxing for months by the time I started reading them, Casey Johnston’s Swole Woman columns for Vice helped me realize that what I actually resent is the idea of exercise solely for aesthetic purpose. To be fair, it’s difficult to avoid thinking this way when diet culture is so pervasive in the United States that the weight loss industry rakes in more than $70 billion each year. For most of my life, I treated exercise as some kind of contractual exchange between calories out and calories in. Burn this amount so you can eat this. Fitness Boxing, though, was gamified enough that I focused harder on the fun and routine of it.

But even Fitness Boxing isn’t exempt from the broadest strokes of weight loss ideology. It’s nowhere near as overtly focused on weight and BMI as something like Wii Fit, but it still tells you how many calories you’ve burned in a session. After a while, it becomes repetitive, too, with few metrics beyond numeric score (it’s still, at its core, a rhythm game) to denote progress.

[Fitness Boxing] forces me to think about what my body is (strong, capable) rather than what it isn’t.

Thanks to an amalgam of factors—new apartment with a gym membership and full COVID-19 vaccinations, among others—I asked Anthony to teach me how to lift, which we started in June 2021. What I most like about it is that I’m much less focused on a caloric exchange or aesthetic outcome and more focused on giving my body the support it needs to grow stronger and lift heavier and heavier weights week after week. It’s exciting, too, to measure progress in such a tangible way. Where there’s only so much to achieve in Fitness Boxing (a finite set of moves, new outfits and songs to unlock, a high score) weightlifting is a slow, steady learning process that challenges me in new ways every week. Most importantly, it forces me to think about what my body is (strong, capable) rather than what it isn’t.

Maybe lifting isn’t the logical next step after Fitness Boxing, but Fitness Boxing gave me a foundational routine that I’ve been diligent with even after I hung up the proverbial boxing gloves and switched to lifting three times a week. Most importantly, Fitness Boxing also forced me to think a lot about what I enjoy doing in terms of exercise, whether I’m trying to beat a high score or lift something heavier than I thought possible. Ultimately, I’m grateful to both for helping me to see my body not as something I resentfully care for but as a body I intentionally care for and forge into something stronger, original motivations be damned.