As I’ve said before, the world of Golarion is the reason I truly fell in love with Pathfinder. It’s a vast and expansive campaign setting, with options for almost any type of fantasy game that you would want to play in or run. Do you want a horror campaign? The eerie, vaguely Eastern European marshes and forests of Ustalav are right up your alley. Political intrigue? Cheliax and Taldor are perfect settings. Epic fantasy can be found in the Saga Lands of Varisia and Irrisen. Pirates can be found in the Shackles. Whatever the flavor of your intended game, there is somewhere on Golarion where you can make the game fit, and the Lost Omens: World Guide is the tool to help you find where.

Golarion is a vast world filled with wonder, and part of what makes it great is the dedication and craft that go into the campaign setting either via adventures or stand-alone books. In the previous edition, there were two separate series of books to give more flavor to the setting, and the amount of detail depended on which line you picked up: the Campaign Setting line was more geared towards GMs, thicker books (usually about 100 pages, but several hardcovers were a bit longer, like Inner Sea Gods and Inner Sea Races) that fleshed out the various locales and people of the setting; and the Player’s Companion line, which was meant to give players options to tie their characters to the setting in smaller and cheaper books. 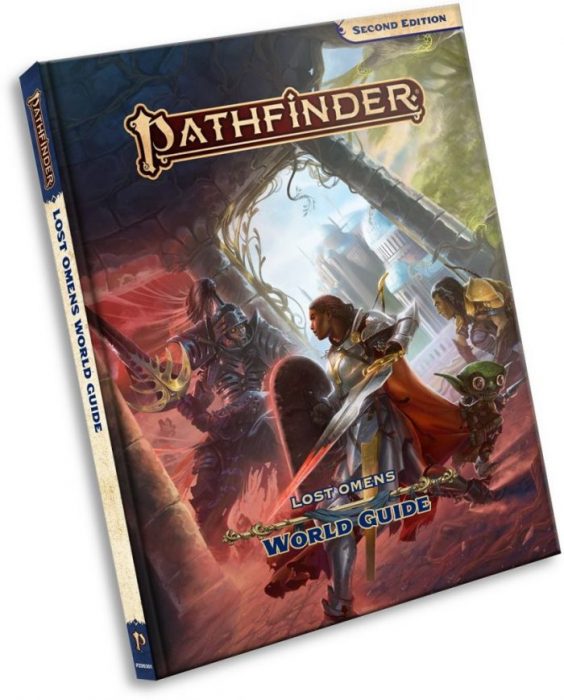 But the real developments to the setting came via the Adventure Paths. As each of these was a long-form campaign ending in remarkable events at high levels, these campaigns would leave lasting ramifications on the world as a whole. Since each home game plays through different campaigns, each home game can have a different status quo for the world. For example, at the end of Wrath of the Righteous, my character became the new herald of the goddess Iomedae. But as Second Edition drew near, it left Paizo in a unique spot of deciding how those years and years of published campaigns had impacted the setting overall. Pertaining to my home game example above, only my game had my character, so Paizo would have to choose someone else to become the new herald for the published setting. This choice went to a key NPC of that campaign, the leader of the demon-fighting nation of Mendev, Queen Galfrey.

Lost Omens: World Guide canonizes the results of these campaigns with the caveat that the adventurers are ultimately successful in every campaign. How they are successful may vary from story to story, with specific NPCs being left in places they may not have been at every table, but in no case is the canonical ending of an Adventure Path a loss for the players. (Codifying a loss into the setting is not a great way to entice people who played and won an Adventure Path to come back.) But if in your home game, the players did lose one of these? Rule number one (that your game is your game, change whatever you need) applies, and you can feel free to change the setting to reflect that; it will just take a little more work on your end.

As such, Lost Omens: World Guide serves as both an introduction to the world of Golarion to new players and an update on the events of the last ten years for more experienced tables. The book opens with a general overview of Golarion, its continents, its solar system, and the planes, along with a broad timeline of major events in the world’s history and an updated map of the region of the world known as the Inner Sea. The timeline only contains a few events from the Adventure Paths, the ones that had the greatest impact on the world at large. Among these were the discovery of the Drow in Second Darkness, and the founding of two new nations in Hell’s Rebels and Return of the Runelords. There’s also the defeat of a demon lord in Wrath of the Righteous (my favorite campaign), and the return of the Whispering Tyrant in Tyrant’s Grasp, the last Adventure Path of the first edition of the game.

After the overview chapter, the book breaks the Inner Sea region into ten broader “metaregions.” This is a change from the previous campaign setting world guide; in Pathfinder‘s first edition, each individual country got a spotlight of its own. Judging by the fact that the Mwangi Expanse book was just released to thoroughly flesh out one of the ten metaregions, I expect that trend to continue as each needs focus.

Each of the chapters on a metaregion opens with a brilliant two-page spread. The top half of the spread is dedicated to a beautiful scene depicting the region, while the bottom half provides a more detailed map of the region and a list of resources and similar things you may find there. For example, the chapter for the Eye of Dread shows the carriage traveling to the haunted manor of Bastardhall. This image is included in a short story published to Paizo’s blog about that haunted locale. The timelines (given through sidebars) continue in these chapters, now focused on events specific to that region. There are also sidebars with notable NPCs, many of whom are familiar faces to people that have played through Adventure Paths. Each of these chapters is twelve pages of mostly lore information with the last two pages of each dedicated to player options for the region.

The carriage to Bastard Hall by Mariusz Gandzel

Because they’re the ones I have most connection to, I’m drawn mostly to the Broken Lands, the Eye of Dread, and the Saga Lands. The Broken Lands include the country of Mendev, who recently drove the demons out of the land formerly known as the Worldwound. Now, along with several other countries in this region, after the events of several Adventure Paths (Wrath of the Righteous, Iron Gods, and Kingmaker specifically), they are tasked to rebuild after successfully repelling terrifying threats.

Much like the Broken Lands, the region known as the Eye of Dread was also central to several Adventure Paths, notably the gothic horror path Carrion Crown and the hobgoblin-related Ironfang Invasion. But beyond the founding of the new Hobgoblin nation Oprak at the end of the latter, the biggest thing to happen in the Eye of Dread was the events of Tyrant’s Grasp, which saw the return of Tar-Baphon from his imprisonment under Gallowspire and the devastation he rained down on the country of Lastwall. This is quite possibly the biggest event in any of the Adventure Paths, and has completely changed the entire region. I know it will be a while before more adventures are set in the Gravelands, but I can’t wait.

As much as I love those two regions, because I am, of course, true to character and love me a good paladin quest, the Saga Lands are the region dearest to me. The Saga Lands are really where Golarion was born, as the first three Adventure Paths all took place in the country of Varisia. Beyond that, one of those Adventure Paths has two direct and one indirect sequel that all take place, at least in part, in Varisia. I love Varisia with my whole heart, and both Rise of the Runelords and Curse of the Crimson Throne are special to me, as they were the first campaigns I ran in Pathfinder. It’s a testament to the game that after my original Curse of the Crimson Throne game died due to my moving, it’s the one that I’ve tried to start again with different groups (and am currently running for Sidequesters Missy and Nola) because I love it so much. The Saga Lands are also home to one of my single favorite little pieces of lore: in Reign of Winter, the characters travel to revolution-era Russia, defeat Rasputin, save Anastasia, and put her on the throne of the land of forever winter, Irrisen. Just love that little bit.

All in all, while a bit shorter than its predecessors (Pathfinder Chronicles Campaign Setting was 261 pages; Inner Sea World Guide was 322 pages; Lost Omens: World Guide is just 138 pages), this book is chock full of fantastic setting updates and lore and does a good job fleshing out the whole Inner Sea Region. And while it is smaller, it’s also cheaper than those other books were, which both clocked in at $49.99 (though you can get the PDF of the Inner Sea World Guide for $9.99, as it was considered core to Pathfinder first edition, and I highly recommend that book as well). I do think that this book is well worth its price for GMs planning on exploring the setting, but it may be less useful to players who will be playing in the world. So if the lore of the world is your thing, pick it up; if not, you can probably skip this one for now.