The last review of the Pathfinder Second Edition rulebook line, for now, is the Advanced Player’s Guide. Like the four books in the line that came before it, this book also had a direct counterpart in the first edition of the Pathfinder Roleplaying Game. The two books are very similar in content, but with some notable changes. I’ll be looking at how those changes work to update the book for a new edition, and how important it is for a player to have this in their collection in a Pathfinder Second Edition game.

Again, before diving into the content of the book, I want to compare the cover to the two different editions of this book. Like the other books in the line, they’re very similar in theme and execution. Both covers involve Feiya the witch fighting one or more sea serpents. In the first edition, she’s aided by Damiel the alchemist. Since the alchemist got promoted to the Core Rulebook, Feiya’s companion in the new version of the book is Jirelle the swashbuckler. This also represents the swashbuckler’s move from the Advanced Class Guide to this book. 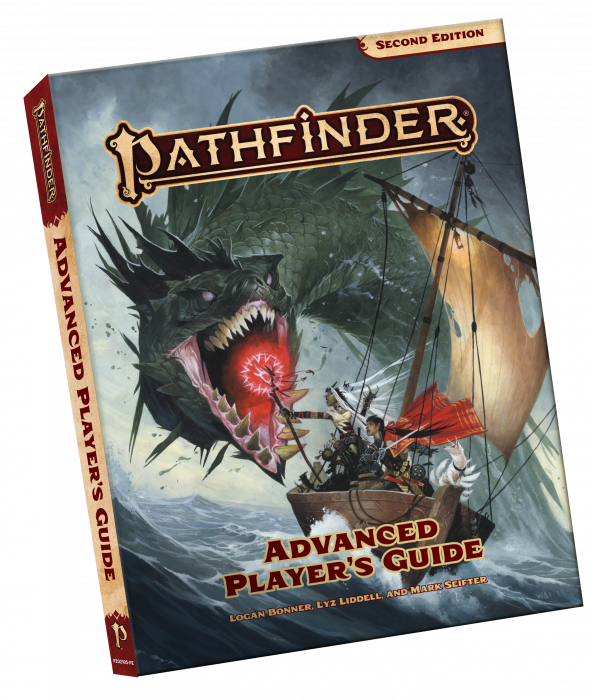 One big change between the editions is that this book quickly introduces some new ancestries to the game, rather than waiting for a book just for that (which is what the Advanced Race Guide was in the previous edition). This adds to the versatility of the system immediately, as it nearly doubles the ancestries available to players, and moves character concepts further away from the traditional fantasy standards. Between new ancestry and class options, the Advanced Player’s Guide gives players exponentially more options to play around with when creating their characters. If a player was waiting to play a tengu, catfolk, kobold, ratfolk, orc, or one of the versatile mixed heritages (tiefling, aasimar, and dhampir among others), this is their opportunity. The neat thing about the versatile heritages in the new edition is that they’re no longer human-centric. If you want to play a halfling aasimar or a gnome tiefling? Now you can. This works to make the entire setting less human-centric and more diverse. Aasimars (people who have divine outsider blood in their family tree somewhere) are one of my favorite things to play (yeah, I know, I’m a parody of myself), so I’m really excited to play a non-human aasimar in the near future. The first chapter also offers additional backgrounds to add more flavor to your characters, such as being a barber or a teacher, or more elaborate backgrounds that one would want to work with their GM to include like amnesiac or haunted player characters.

Much like the first edition Advanced Player’s Guide, this one is the first book after the Core Rulebook to introduce new base classes to the system. In the first edition Advanced Player’s Guide, the classes added were alchemist, cavalier, inquisitor, oracle, summoner, and witch. Oracle and witch return in this edition. As previously stated, alchemists were reintroduced in the Core Rulebook. Summoner got saved for Secrets of Magic instead. Inquisitor will likely show up in a later book, but nothing that’s been announced yet. And cavalier? Well, we’ll get to that in a minute. There are fewer classes in the new edition, but that space is instead filled with new ancestries and backgrounds, making this book more robust than just being a book of new classes. This allows Paizo to save or rewrite classes to better fit both the new system and themes of particular books, like moving summoner to Secrets of Magic and having both gunslinger and a new inventor class in the upcoming Guns & Gears.

Beyond oracle and witch, there are two other classes that made the jump from the previous edition to this book. Moving from the Advanced Class Guide to the Advanced Player’s Guide are the aforementioned swashbuckler and the investigator. In Pathfinder‘s first edition, both of these were “hybrid” classes, which were mixes of two existing classes. Investigator was a mix of alchemist and rogue, while swashbuckler was a mix of gunslinger and fighter. Clearly, that has changed for Second Edition, since gunslinger won’t be introduced until later this year in Guns & Gears. The Advanced Player’s Guide makes both swashbuckler and investigator into fully realized classes.

Of the four new classes, there are diverse options for every type of player. Investigator allows for another type of intrigue-based player character for those tired of playing rogues. The investigator is an intelligence-based class, meant to be good at things like research and figuring out puzzles. While their role is one of intrigue, unlike rogues, they are less likely to sneak off into danger on their own. They’re more careful and considerate in their approach. Something that the Core Rulebook did and is continued here is small examples of what a particular theme of a class may look like. One of the sample investigators is the coroner, who focuses his investigations on dead bodies.

Oracle brings a spontaneous divine casting option to the game, much like it did in the first edition. They’re also a unique class in that their power comes with a curse. Most divine casters have to pray to the gods daily for their abilities, while oracles are granted their abilities without such piety—but these come with a cost that is tied to the source of their powers. For example, an oracle granted their abilities by the forces of death will see their body slowly decay. Pathfinder uses specific character designs to represent the classes in artwork, called “iconic characters;” it’s worth noting that the iconic oracle changed between editions, as the new one represents one of the new ancestries from this book as well. Korakai, the new tengu oracle, again works to move the game away from its origins in the traditional fantasy landscape and into something unique and fun. I mention this because one of the sample oracle builds utilizes the iconic oracle of yesteryear, Alahazra. Her build is a flame oracle, which brings with it a curse that hinders her senses as she is constantly surrounded by smoke and eventually, at higher levels, flames. 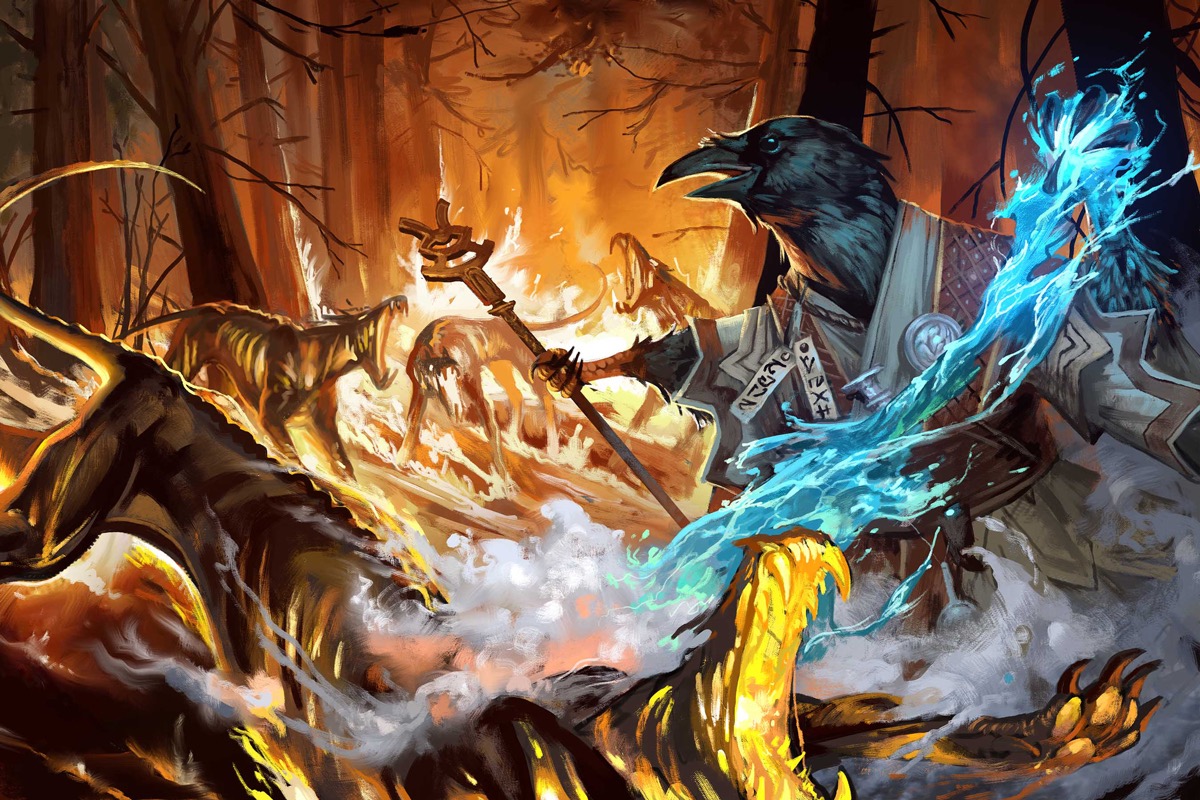 Swashbuckler allows you to live out all your romance adventure dreams with the daring and dextrous fighter with a flare for the dramatic. The swashbuckler is one of the most archetypal of classes, as culturally they have been classic examples of adventurers for centuries. These are your musketeers or merry men, your Zorro and your Peter Pan. This type of character has always been one of my favorites to play because it’s one of my favorite fictional archetypes right alongside the lawful good bastion. If you want a sample swashbuckler, the book provides the ideas of a catfolk gymnast or an elven fencer, showing the versatility of the class.

The last of the new classes in the new Advanced Player’s Guide is, like the oracle, a direct update of one of the classes found in the first edition version of the book. In the previous edition, the witch was a prepared arcane spellcaster, much like the wizard, but with a little different flavor. The transition to a new edition makes for a much more unique class, because like the sorcerer, the witch can now cast from any of the four magic sources (arcane, primal, occult, or divine), depending on the theme of her patron. For example, a patron tied to the themes of night will grant a witch access to occult spells, while one connected to winter grants primal spells.

Along with the four new classes, there are new options for all the existing classes from the Core Rulebook, to allow further customization of characters created with that book. One of the most interesting of these new options is for champions, a class that had been known as paladins in the previous edition, and restricted to lawful good alignments. Second Edition changed that by making paladins a type of champion (the lawful good alignment of that class). Along with the paladin, the Core Rulebook introduced the liberator and the redeemer so that there were options for all three good alignments, with the implication that there could be champions of any alignment. The Advanced Player’s Guide goes further, giving us the three options for evil characters: tyrant, desecrator, and the infamous antipaladin. This gives some fun options for an evil campaign, or good options for GMs to spruce up some of their villains. I’m also curious to see what the neutral options for champions will be in a future book.

The other important chapter of the book for diverse options is the chapter on archetypes. Archetypes allow you to trade out some class features for others, allowing you to customize a class for a specific theme or idea. With archetypes, you trade out access to class feats that are for your main class for new feats that are for the archetype. For example, a rogue could forgo taking one of the second-level rogue feats to instead take the “wizard dedication” feat. This would allow the rogue to begin casting low-level wizard spells, and if they choose to continue taking wizard archetype feats instead of rogue feats, they will grow more powerful in spellcasting while sacrificing some of their capability in their main class.

The Core Rulebook offered multiclass archetypes, but the Advanced Player’s Guide offers even more diverse options. It’s here where we see some changes in the rules, in that a couple of things that had previously been full classes are now archetypes instead. Vigilante (Ultimate Intrigue) and cavalier are the two classes that get this treatment here. This is interesting because the way that archetypes work in Second Edition is mostly based not on class, but on specific levels of training or ability scores, so theoretically, almost any class can be almost any archetype as well.

The other big change to archetypes is that they have replaced prestige classes altogether. Prestige classes were complicated and ultimately often confusing, and having archetypes do that work instead is incredibly smart. In all, there are 38 new archetypes to apply to your characters, plus the 16 multiclass archetypes as well.

After all the ancestry, background, and class customization options are dozens of new feats, spells, and items to continue sprucing up your games. I think my favorite new item is the predictable silver piece, which will normally behave like any other coin, but after you take an action to rub your thumb on one side of the coin, you’ll twist fate so that the next time it’s flipped it lands with that side up. Just an incredibly delightful way to be mischievous and sneaky.

And that is, for now, the last of the rulebook line, but there are other rulebooks down the line, including Guns & Gears and Book of the Dead. In all, it’s a really strong start for Pathfinder Second Edition in terms of rules.

Next up: we’ll start diving into the updated campaign setting books.