Diary of a Hardline Shep, Part 3: Who Gets to Choose

Welcome back to Diary of a Hardline Shep. Last time I talked about how Mass Effect’s premise positions humanity as an exceptional species. What I didn’t talk about is how much embodying that really sucks.

The first act of Mass Effect 1 was all about me trying to become a Spectre, a galactic special forces agent that operates above the law. Only the most powerful species of the Citadel Council are represented in the forces, and I was the first of the humans to be granted the honor. I was given the power to do anything I deemed necessary to get a job done.

I’m convinced some of my dialogue options were written so that the player could feel good for not choosing them.

Now here’s the thing: I started this series by saying that I would be playing a very humanity-first Shepard. What I expected was various opportunities to benefit humanity at the cost of other species. What I got was a caricature of a xenophobic bigot.

Every time I met a new alien, the renegade dialogue options were overwhelmingly awful. I openly dehumanized (de-person-ized?), belittled, and outright threatened other species for merely existing. I called them “it,” threw out slurs, and threatened them for daring to be nonhuman in my presence. Upon first meeting, it was usually up to my alien teammates to defend their entire species’ history. To be honest, I’m convinced some of my dialogue options were written specifically so that the player could feel good for not choosing them. 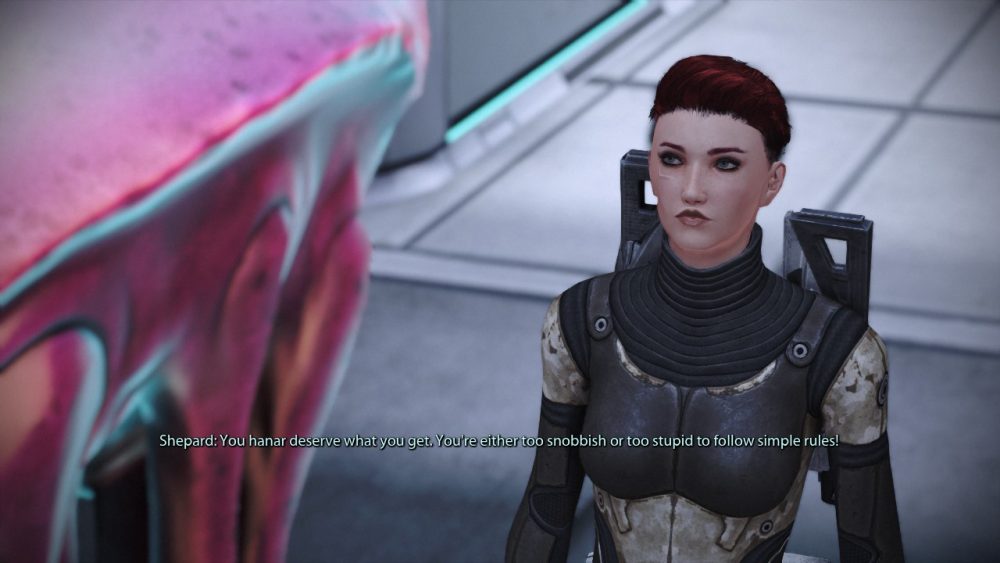 But it wasn’t just my Shepard’s microaggressions that made the game hard for me to play. It was also the genocide.

Each of the three missions I played in the middle act presented me with the option to doom an alien species. In most cases, it was framed as a morally grey decision, or otherwise forced upon me.

In my first mission, I went to help a human colony under attack by robots. Over the course of the mission, I discovered that the robots were trying to destroy a sentient millennia-old plant with the power to control people who breathe its spores. In the climax, I fought through the mind-controlled colonists to get to the plant and destroy it.

Now, there is a version of this mission in which wiping this plant species from existence is necessary to save the colonists’ lives. But that’s not my Shepard. When offered a way to non-lethally subdue the colonists, I rejected it, reasoning that I had no way of knowing if they could spread their infection. 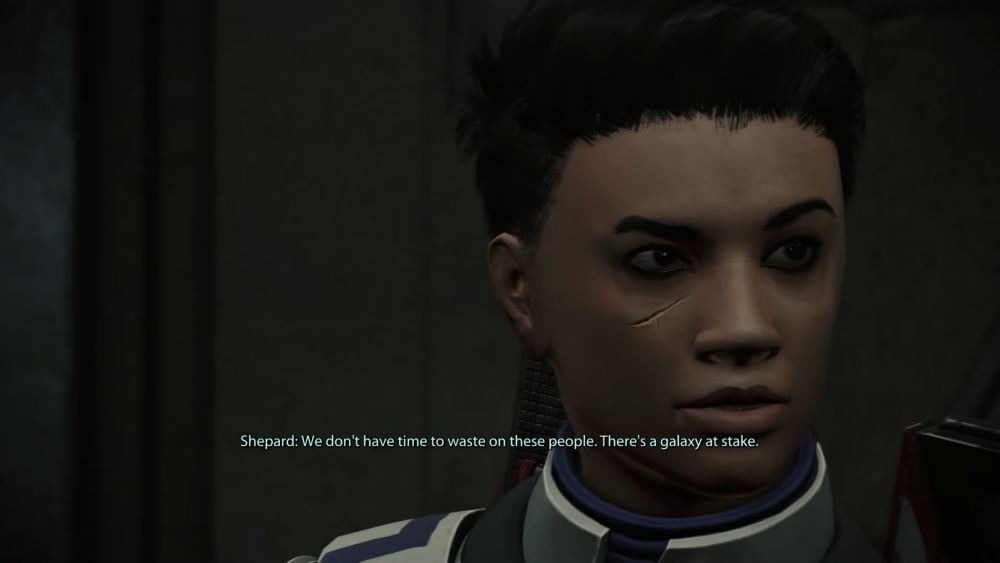 Turns out I was being a little generous with her motives.

The second mission I played took place on a research planet called Feros. Long story short, my team ended up in a lab with the last remaining Rachni queen. The Rachni were a bug-like species with a semi-hivemind and an incredibly fast breeding rate. Long before humans were even on the galactic scene, the Citadel species fought a protracted war against them, narrowly winning by enlisting the powerful Krogan in the fight.

At this point, Shepard had never seen a Rachni before—she had only heard stories of them. I listened to this queen beg for her life, to explain that she presented no threat to galactic species. She was only interested in raising her children in peace. I honestly think it’s one of the most beautiful scenes in the game and the Rachni species one of the most interesting aliens I encountered.

After murdering the Rachni queen, I didn’t touch the game for three weeks. I felt terrible and started to dread playing as this version of Shepard. Life is hard, and one of the reasons I liked Mass Effect to begin with was that Shepard made dangerous choices to make the world better for others. But I’m starting to wonder if “exceptional” people like Shepard being put into the position to decide for others isn’t part of the problem in the first place.

The last of my midgame missions was the assault on Virmire, but a lot happened before I got there. After the Rachni, I really dove into Mass Effect’s side missions and got to know my squad. Someone I hadn’t really spent time with before this playthrough was Wrex. I didn’t think I’d get along with a hyper-masculine warlord, but he’s actually a pretty thoughtful guy.

It’s a notably clumsy approach, but it’s through conversations with your teammates that you learn all of the general backstory about their species. I really appreciated Wrex’s conversations, because unlike everyone else, he didn’t take it lying down when I demonstrated a chronic lack of empathy.

Unlike everyone else, Wrex didn’t take it lying down when I demonstrated a chronic lack of empathy.

While we chatted by the weapons lockers, Wrex was the one who explained to me the history of the Krogan. Back during the Rachni wars, the Council species weren’t doing so well. The Rachni were fast-breeding and efficient combatants. So the council took a race with similar traits and “elevated” them. They gave the Krogan the technology they needed to achieve interstellar travel. They promised planets, colonies, and power in exchange for help in the war.

As the story goes, after the war, the Krogans got too good at colonization and were viewed as a threat. To stop their explosive expansion, the Council deployed the genophage, a biological weapon that rendered 99.9% of Krogan children stillborn.

I tried to relate to Wrex’s story, comparing the genophage to humanity’s three-month war with the Turians, but he wasn’t having it. He shut me down and made it clear that the forced sterilization, and continued oppression, of his people wasn’t the same. What’s more, I listened. Even playing like I am and intentionally choosing the most callous options, the game only allowed me to express empathy and apologize for what I said.

It’s actually because of this uncharacteristic understanding that I was really dreading the last mission of the midgame. My squad and I eventually tracked down the big bad and discovered his plan. He’d found a way to cure the genophage and clone an army of Krogan. Queue the third genocide.

My only option was to destroy the facility and all of its genophage research. There wasn’t even a discussion about it, it just had to be done. Of course Wrex objected and wanted to try to save some of the data that could form a lifeline for his dying people.

I honestly thought I would have to kill him. I knew from previous playthroughs that if I did the mission too early in the game it was inevitable. But I was surprised that this time around I’d collected enough renegade points (rewards for roleplaying a renegade that unlock further special dialogue options) to convince him otherwise.

I argued that I was his commander, that there was no hope for his people because Saren would just enslave them anyways. I berated Wrex until I broke him, leaving him resigned to the task ahead with no hope for a better future. 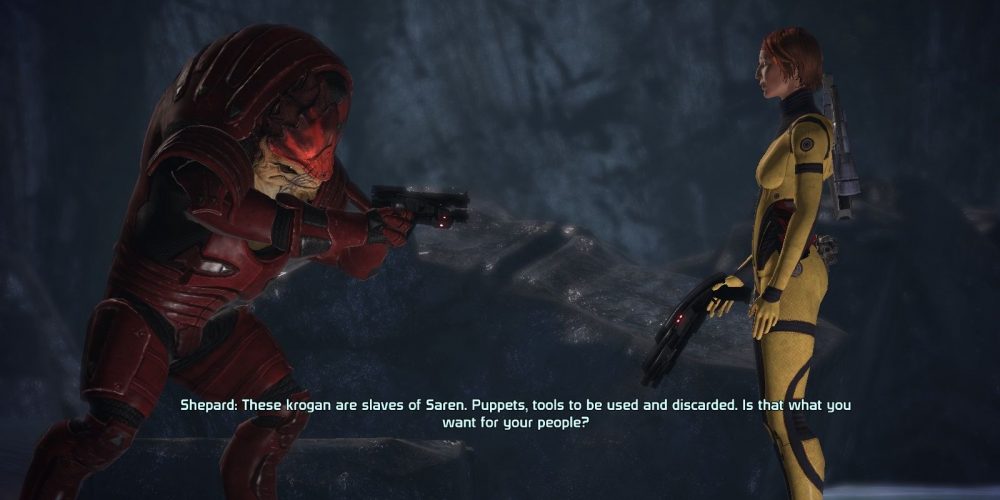 And this is how she talks to friends.

By virtue of being a main character, it’s up to me to make choices for the whole galaxy. I was always the one to decide whether a species should live or die. But playing the way I am, it’s always die. I killed because people were in my way. I killed because they weren’t human. And to be honest, most of the time I killed because my Shepard found it fun.

It’s a style of play that left me feeling tired after every session. I’m less hopeful for the fate of the galaxy as a result.