The Pathfinder Second Edition Core Rulebook and Bestiary books give someone everything they need to design and run their own campaign and everything that a player needs to play in one package. There are hundreds of player options, plus several tips and tricks peppered throughout, but maybe you want even more pointers. Well, that’s where the books that continue the Rulebook line come in—starting with the Gamemastery Guide, which provides game masters more options to enhance their games.

Much like the covers to the Core Rulebook and Bestiary, the cover to the new edition of the Gamemastery Guide references back to the previous edition. That version of the cover showed the Runelord of Greed, Karzoug—final boss of the first Pathfinder Adventure Path Rise of the Runelords—with his blue dragon servant Ghlorofaex. The new edition has Alaznist, the Runelord of Wrath, with her red dragon servant. Just as Karzoug was the final villain of an Adventure Path that took place just before the first edition of the Pathfinder Roleplaying Game, Alaznist was the final boss of one of the last campaigns of that edition.

While the Gamemastery Guide opens to tell you that this book is meant to provide more options, it also very clearly states that the most important rule is that your game is yours. Find rules you don’t like or that don’t work for your table? You can ignore or change them however you see fit. 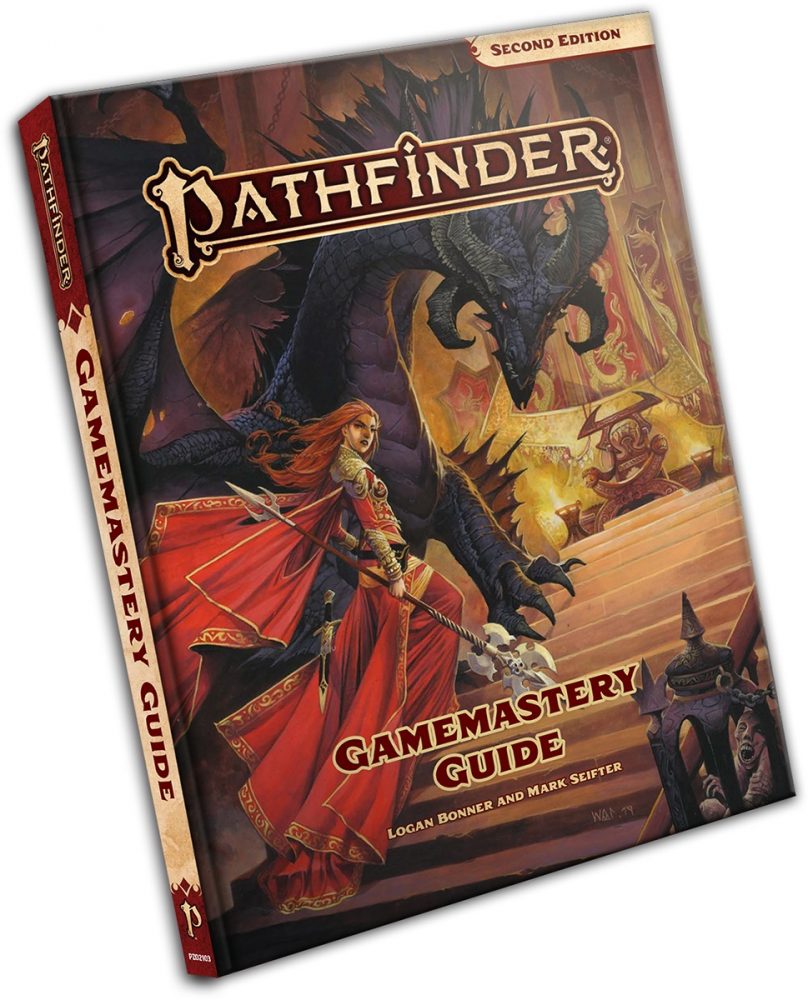 The first chapter of the Gamemastery Guide is just more detail on the basics of being the game master, expanding on the smaller section included in the Core Rulebook. One of the most important parts of this chapter for me is the one about designing and developing non-player characters. This section is quick to advise a GM to take care with creating their NPCs, to be careful when including things like slavery and abuse into backstories because those are things that need to be handled with care. This is one of those things that make Paizo stand out as a company for me, as since the earliest books in the Pathfinder line they have been working to make the game more and more inclusive. As a hobby, the tabletop RPG scene has not always been welcoming to people that are not straight white men, and while this is getting better, there’s still work to be done. Putting advice like this in the book helps to make sure that the game is more inviting to everyone, and helps to guide a new game master away from some of the stigmas that have been associated with the game.

As a longtime GM, the first chapter is not as useful to me as it will be to others, and that’s fine. But it still offers lots of little tricks I’ll happily put into my own games, like a chart with some short details to help a game master describe evocative environments or some quick descriptions of people who can help a player character retrain some skills. But probably the most important section of the chapter is the one on “Resolving Problems” that gives you tips on how to manage things that can destroy a game, like total party kills or problem players. Sometimes a problem player is just one who is just a little too excited to help other players, and as such can be overbearing with telling them what they should do. Other times, it may be a player who truly does not belong at the table due to their treatment of others. This section gives advice on many kinds of those players and helps to guide a GM through resolving things in a way that works best for everyone involved. Thankfully, I’ve never had to eject a player from my game due to vile behavior, but I have had to talk to a player who was encroaching on another’s fun because he was trying to help her play her character. Conversations like that require a little tact, and including a guide in a rulebook is a good step.

The latter half of the chapter is all about building adventures and campaigns and is an extremely useful tool for those looking to homebrew their own stories rather than using one of Paizo’s premade adventures. I typically prefer the latter option myself, as it takes some of the prep time out of my hands, but it’s also a really satisfying thing to build and run your own world.

The second chapter is just a GM toolbox filled with tons of options to assist GMs with things like creature design or treasure hauls. Of particular note is the artifacts section, which reintroduces several artifacts from concluded Adventure Paths, like the sword Serithial and the infamous Horns of Naraga. Again, this has the benefit of drawing the campaign setting into the rulebook line, and it causes that ping of recognition for long-time fans.

The third chapter introduces rule subsystems to add more flavor to games. These are a series of additional rules systems for specific circumstances, like chases or exploration. This is also something that was included in the first Gamemastery Guide, and things like the chase rules have been a big part of the game since that book. Several of the subsystems in this book are things that had been ported over from Ultimate Campaign from the first edition of the game, so there are more robust options earlier in the new edition’s life cycle. These subsystems allow game masters to make more interesting encounters and add a lot of variety to their games, and make for one of the most useful sections of this book, even to experienced GMs.

The next chapter is devoted to rules variations. This chapter allows further customization for your home table based on rule number one—that the game belongs to you— to use the options that work best for your players or to give you ideas on the things that you can change yourself. Maybe your players are holdovers from the first edition of the game and would rather use those methods to determine the ability scores of their players. Well, you’re in luck—that option is in the Gamemastery Guide. Maybe you want the alignment system to be less rigid. Good news, because there are rules for that too.

Like the subsystem chapter, the rules variant chapter brings in things from Ultimate Campaign, notably a more robust background generator. This is an incredibly useful tool for new players to use, as it can help them come up with ideas about who their character is. It’s also a fun system to use when trying to create NPCs with relatable backgrounds. Once again, I’m happy to see this included in the new edition so early, as Ultimate Campaign was one of my favorite books of the previous edition.

The final chapter of the updated Gamemastery Guide is the same as the final chapter of the original, an NPC gallery of already-created NPCs to drop into your game. These pages are set up much like the pages of the Second Edition Bestiary with sidebars for additional notes along with the stat blocks of the NPCs. There are also rules with which to customize the NPCs to your own campaign. The NPCs in this gallery are separated by the type of role they can play in a campaign, like criminals or religious devotees. I think my personal favorite of this set of NPCs was the Publican group, which included a sidebar on different beverages characters can imbibe in Golarion. These NPCs are grab-and-go, but very useful in a pinch when all you need is a stat block for an encounter you didn’t expect.

The Gamemastery Guide is probably the Second Edition rulebook I’ll personally use the least, but that does nothing to discredit its worth to a new GM. Someone brand new to GMing will make great use of this book immediately, while more experienced GMs may find it more useful when they start to design their own campaigns and move the story off the beaten path. It takes years to build out your GMing toolbox, and the Gamemastery Guide helps you to lay the foundations to make that much easier. Even with decades of GMing under my belt, there are still things that I will keep this book handy for.