In the second of my Pathfinder Second Edition reviews, I’ll be taking a deeper look into the three volumes that fuel gamemasters with monsters to beset upon their players, for all adventuring parties need foes to vanquish. The bestiary series is where you get your demons and dragons, your angels and aboleths (renamed alghollthus for Second Edition). The first Second Edition Bestiary is 334 pages of monster stats with about another 20 pages of supplemental rules, glossaries, and indexes. The second and third books in the series clock in at an additional 319 pages each.

Once again, the cover of the new edition references back to the previous edition. Both prominently feature a Wayne Reynolds troll, and while on the first edition book the troll is surrounded by goblins the new one has him surrounded by kobolds. This is to show the evolution of goblins from major pest to playable race in the core rules, signifying that their role as the main low-level monsters of the setting are now the kobolds. The one replacement I don’t understand, though, is the switch from a marilith demon to a hydra. Mariliths do play a role in the third Pathfinder Adventure Path (published campaigns set to take heroes from level one to anywhere from level 16 to level 20), Second Darkness. But hydras don’t play a role in any of the published Second Edition adventures yet. Maybe it was just a case of recognizability, as Hydras are eminently more recognizable than marilliths to a general audience. Many of the more popular creatures that appeared in later bestiaries in the previous edition have been promoted to the first Bestiary this time around, which necessitated some changes to the later covers. These changes also tend to represent specific changes in the rules introduced in the latter two books. For example, the addition of the serpentfolk on the cover of Bestiary 2 guides a reader to see rules for mutations that accompany that entry inside, while the skeleton troop on the cover of Bestiary 3 hints at the introduction of troop mechanics. 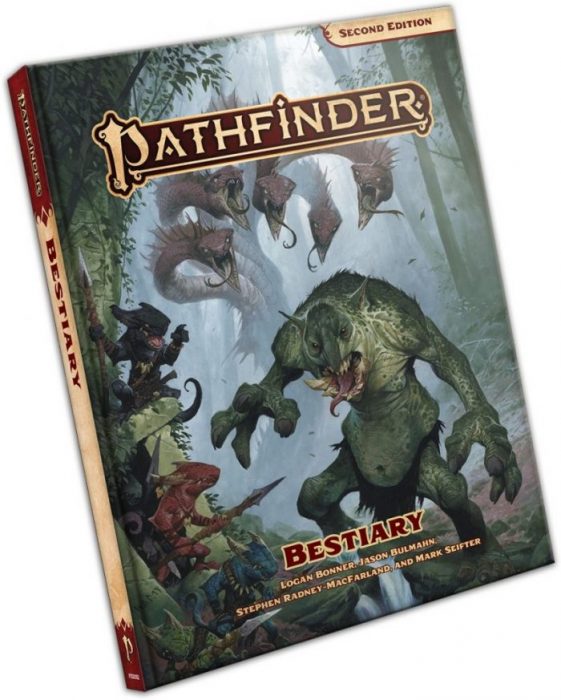 Much like the Core Rulebook, the entries in the new Bestiaries are streamlined and simplified, enough so that most monsters in the books can have their stat block easily printed on a notecard, which Paizo has done with their Bestiary Battle Cards. These cards have an image of the monster on one side and the stat block on the other, making for easy GM reference. You can pull the cards you need and not have to keep flipping through the book during fights. One of the goals of Pathfinder Second Edition was to simplify the game so that players could jump right in, and I think the streamlined stat blocks for monsters is a big part of that. 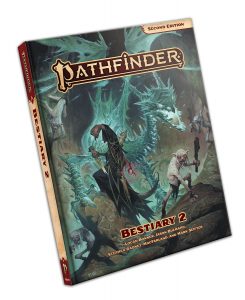 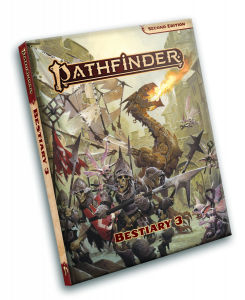 Also taking cues from the updated Core Rulebook is the effort in the new Bestiary series to tie the three books into their campaign setting a bit more. Each monster entry contains both a standard description of the monster and also contains sidebar entries that give you more insight into things like the creature’s behaviors or where they can be found on Golarion. Now, as a gamemaster, you can use monsters wherever and whenever you see fit; these additional pieces of lore are just meant to help give you ideas. But above all else, rule number one is that the game belongs to you.

On top of these pieces of lore, there is more of an effort to bring in specific creatures that, in the previous edition, had been kept to the campaign setting books rather than brought into the rulebook line. The campaign setting line were smaller books that were very specific looks at different regions of the world or different types of creatures that could be found throughout the lands. They were meant for anyone playing a game in the Pathfinder campaign setting world of Golarion, while the rulebook line was meant to be more world agnostic. While it’s still true that you can use the Pathfinder rules in any world, be it an already established campaign setting or a world of your own design, the new edition is making a greater effort to tie the two together. A key example of this is the nascent demon lord Treerazer, who is one of the most frightening villains in the Pathfinder lore. In the first edition, he had been used as one of the monsters in the Inner Sea World Guide; in Second Edition he’s in the first Bestiary.

Among my favorite of these lore sidebars in the first Bestiary are those of the dragons. Each color of dragon has a sidebar detailing some information about one of the famous dragons of Golarion that matches that color. Again this flavor adds a lot to the book and makes for interesting little plot hooks a GM can use to build out their own games. 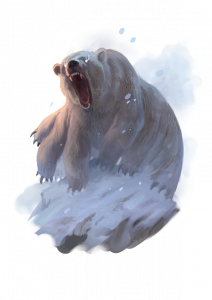 Look at this big boy

Another thing I love in the new edition of the Bestiary is the effort to make elemental creatures unique, rather than just the same thing with a different size repeatedly. Having each size of elemental be distinct and different is again something that adds flavor and variety to the game, and makes things a lot more fun. After all, who wouldn’t rather fight a rat made of fire than just a standard fire elemental scaled down?

Among my favorite new creatures to be included in these first three volumes are the sinspawn that originated in Rise of the Runelords, the various psychopomps in all three volumes, and my absolute favorite monster from First Edition, kokogiak. This guy is an absolute LEGEND. Kokogiak is a ten-legged giant polar bear with an ice breath weapon. I fell in love with this creature when it was introduced during the Reign of Winter adventure path and immediately worked it into the game I was running, which luckily was in icy mountains at that point. The Second Edition variation of the beast loses the breath weapon but replaces it with an imitation of its victims’ screams that deals mental damage. Either way, still one of my favorite creatures in the game. 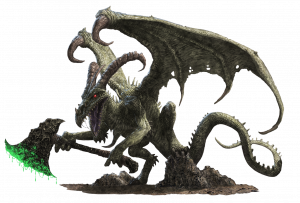 Between the three books for Second Edition, there are hundreds of monsters to use to populate your games, along with enough lore and flavor to help you to design campaigns to include them. Take the aforementioned Treerazer for example. Treerazer is a level 25 creature, meaning that even for a party that’s made it all the way to level 20, he is still going to pose an immense challenge. He should be the end boss of a campaign, and his stats reflect that. The descriptive paragraph before his stats tells you that he makes his home near the elven homeland of Kyonin, set on destroying the woods that are so sacred to those people. However, just because he is an ultimate end boss doesn’t mean you have to wait until the end of a campaign to turn players’ attention toward him. In the sidebars of his entry is information on how to design cultists to follow and worship the demon, including the edicts and anathemas of their religion. This would allow a gamemaster to start building up the threat early, leading to a final battle for the future of the Fierani Forest that Treerazer is working to destroy.

Whether you’d rather beset hordes of undead on your players or have them fight monstrous aberrations, there are options for every game. Much like the Core Rulebook that they supplement, the Second Edition Bestiaries are a fantastic fresh start to a game world that is already well developed.