As of right now, there are six Pathfinder Second Edition rulebooks. The rulebooks in Paizo’s product lines are the backbones of the rulesets. These are the books that are most necessary to run a game. Truly, the two you need the most are the Core Rulebook and the first Bestiary. These are the bases on which to start building out your game; every other book in the line just adds more options to enhance things. While I feel like many of the changes that Paizo has made to the Core Rulebook are great revisions to a system I already loved, I’m happy to dive into just what makes this new edition worth looking into.

Before I get into the contents of the Core Rulebook, I want to talk a little about the cover, which is what sets the tone for the line and catches a prospective new fan’s eye first. Since the first edition Core Rulebook released in 2009, every single rulebook release in either Pathfinder line has had cover art by Wayne Reynolds. Reynolds has a distinct style that really has done much to define the look and feel of the Lost Omens campaign setting and the Pathfinder RPG as a whole. The fun thing about the first four Pathfinder Second Edition covers is that they each hearken back to their equivalent book in the first edition of the rules. The old Core Rulebook featured Valeros the fighter and Seoni the sorcerer fighting a red dragon. The new edition has Merisiel the rogue, Kyra the cleric, and Harsk the ranger fighting that same red dragon. 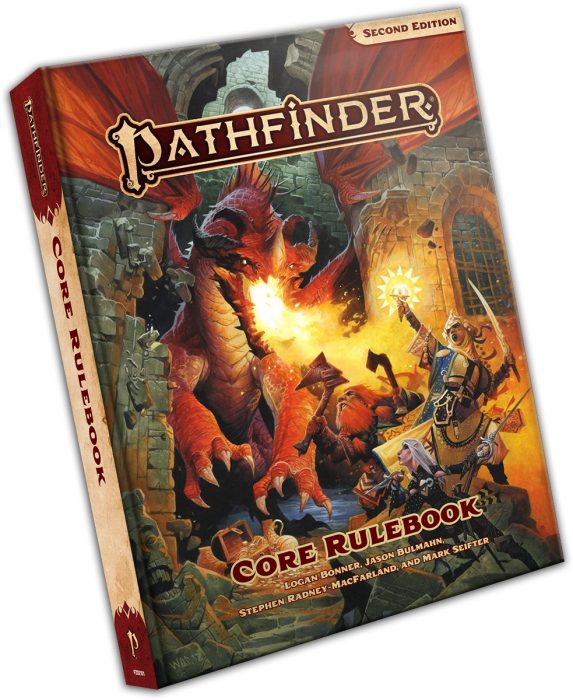 The first thing to take note of on the Second Edition Core Rulebook is that this baby is THICK. Clocking in at 638 pages, it beats out its first edition counterpart by sixty pages. This is huge and imposing, for sure, but less so when you think about the fact that, unlike their competitor Dungeons & Dragons, Pathfinder puts both the “how to play the game” and “how to run the game” rules into a single book. Dungeons & Dragons split these into the Player’s Handbook and Dungeon Master’s Guide respectively. Combined, those two books are 611 pages of content, so only slightly less than that of the Core Rulebook.

The book opens with an introduction that defines key terms and provides examples of how gameplay might look. One of the first changes from the first edition that you might notice is that specific modes of play are defined, separating out exploration, encounters, and downtime. These are great things to define, because so often as players and GMs we get so focused on combat that we ignore other parts of the game.

The next addition that is absolutely brilliant is the new action economy. This is a massive change from both the previous version of Pathfinder and the rulesets that came before it. Previously, players got a single standard action and a move action, and while they could substitute a second move for their standard action, they couldn’t do the reverse. In Second Edition, this is replaced by a three-action economy. Every turn players get three action points, and different actions require a different number of points. But now, players get to choose exactly how they spend their turn. If you want to move three times? You can. If you just want to wail on your enemy with your sword three times? You can do that too. Each action in the game is paired with either the one, two, or three action symbol to denote how many actions it takes. The exceptions to this are things that are considered free actions (talking, within reason, is an example) or a reaction that is triggered by something else on someone else’s turn. This change adds a lot of customizability to how you play the game, and I think it’s one of the two changes I love the most from first to second edition.

The next six chapters give you the information needed to start building out your first characters, starting with Ancestry and Background. Ancestry is another welcome change in Second Edition, replacing the severely outdated phrasing of “Race” that most often has been used in the past to describe whether your character is elf, orc, or human. Backgrounds are a new addition that replaces the traits that were added to the first edition of the game. Combined with the chapter on classes, these are the foundation, or ABCs, of your character. They help you to build your flavor and decide what exactly you’re able to do. The Second Edition Core Rulebook adds both a new ancestry (goblin) and a new class (alchemist) to the starting cadre of character options, while still providing all the bases of the previous edition. The other big change to ancestries is that half-orcs and half-elves are now just a subset of human ancestry, but with rules that allow you to make them subsets of other ancestries as well. The baseline assumption is that the mixed parentage will be human and either elf or orc, but the ability to be creative with this now has built-in rules.

After these chapters are those for options like skills, feats, equipment, and spells; the biggest change here is just to how skills work. Rather than a set number of points to spend every level, players get set skill increases to spend as they level up. This simplifies a complex system while still maintaining a core part of the game. Feats, equipment, and spells are all very similar to past systems, but with some new flair to go with the action economy and to make weapons a bit more interesting.

Chapter eight is something new to this edition of the Core Rulebook: an introduction to the campaign setting for the Pathfinder Roleplaying Game, the Age of Lost Omens. The previous edition’s rulebooks were more separated from the campaign setting, really only tying back to it towards the end of the first edition. This time, Paizo is tying their intellectual property together right from the start, and this provides a good overview of the main game world so both players and game masters can see what that setting is like without having to buy an extra book. As I said before, the world of Golarion is why I fell in love with Pathfinder, so seeing even little snippets in the Core Rulebook is exciting.

The remaining sections of the book are devoted to showing exactly how the gameplay works. The biggest and most exciting change of all these rules at the back of the book is that of how degrees of success work. In the previous edition, players had a chance of critical success with a natural 20 on combat rolls. Lots of home games would house rule 20s as automatic successes on any roll and 1s as an automatic failure. Pathfinder Second Edition codifies rules for these rolls, but makes it a lot better and more interesting than just automatic success or failure. Instead, those rolls will just adjust your degree of success up or down by one. And degrees of success are a fun addition too, where if you beat the difficulty of a check by ten or fail the difficulty by ten it is considered a critical success or failure. I absolutely love this rule change, and it’s probably my favorite change between editions.

All in all, I think the Second Edition Core Rulebook expands on, updates, and modernizes the rules of the traditional fantasy roleplaying game for a new generation and is a great starting place for people wanting to join the hobby for the first time. It’s simplified but not too simple and makes just enough interesting changes to keep it fresh and new for long-time players.