It wasn’t until the middle of 2020, after beating all three Dark Souls games and in the clutches of a worldwide pandemic, that I dusted off my cape and walked the bloody cobblestone streets once again. I thought it apt: let’s fight an imagined plague while one rages outside. The streets are not safe, and everyone with the luxury may shut their doors and wait it out. The hunt was on tonight. 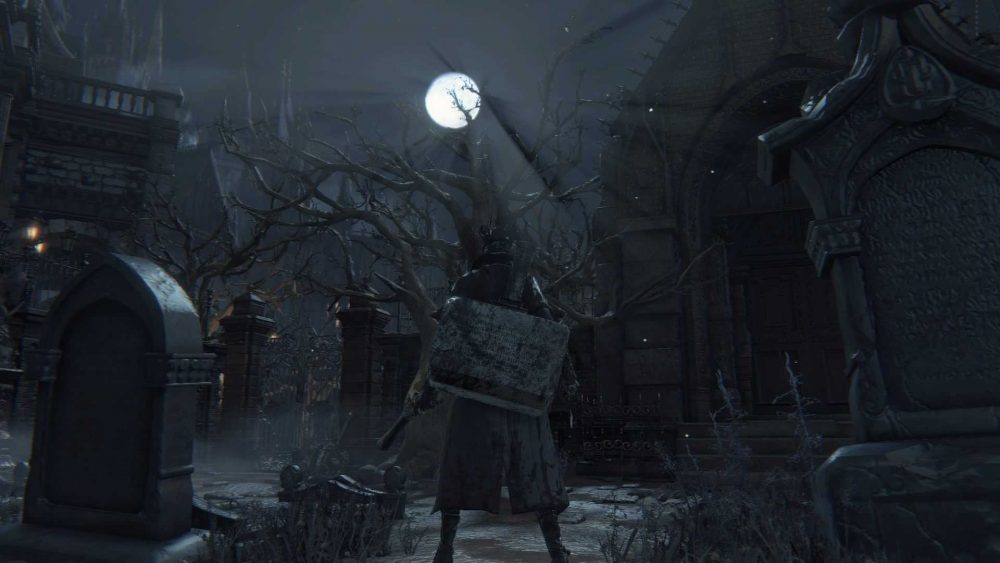 Don’t wait up, off to hunt

Shakily, I returned to the frenetic controls of being a hunter. Dark Souls allows you a certain level of protection in Shields and Armour, but you’ll find no such comforts here. You must act quickly and decisively, as the beasts spare no room for cowardice. My main strategy was to hit faster than anything could hit me, since I was still shit at parrying. The real test soon came in the form of Gascoigne, the once-loyal hunter and doting father, turned monstrous and drunk with blood. His and other hunters’ blood frenzy wouldn’t fully come to my understanding until much later; at the time, I simply believed him gripped by paranoia. My body painted the tombstones crimson as I struggled to bring the fight close-quarters, inches away from the Padre’s fangs. After screeching through gritted teeth for a couple of hours, he finally perished by my saw on the stairs. My hands were shaking, and the rush of adrenaline pumping in my veins finally had release. PREY SLAUGHTERED cut through the screen. I HAD slaughtered him, and it felt so damn good. 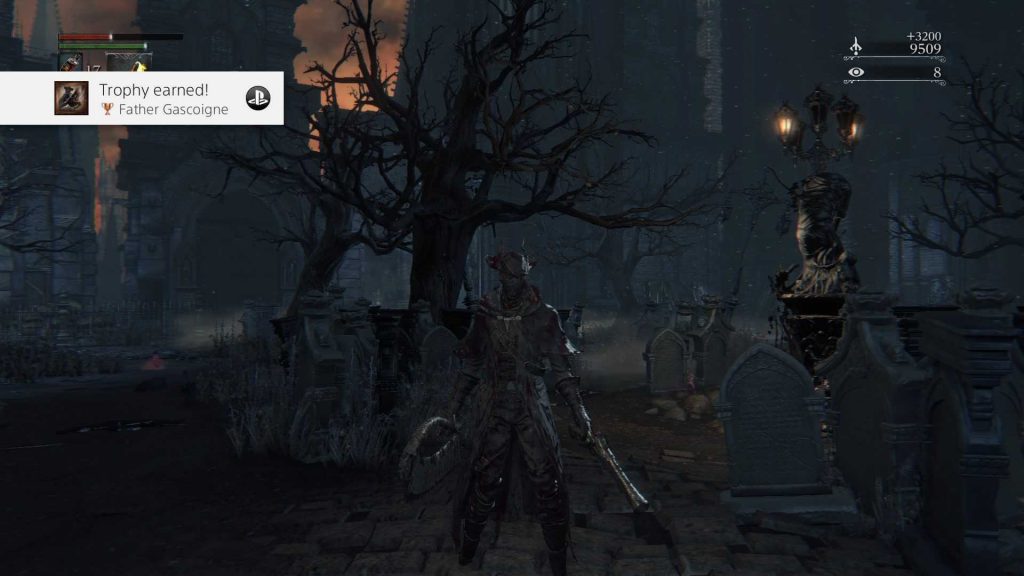 Father Gascoigne, the the first major test of Bloodborne.

The rest of the journey continued in bursts. Slowly figuring out the many twists and turns of a once beautiful city falling under the weight of its own hubris. You piece together that the Healing Church had offered a cure for any illness through the miracle of Blood Healing. You, too, came to this place, seeking panacea from some unknown affliction. The Yharnamites were brought to prosperity by the blood and undone by the blood. The Church had dabbled in cosmic beings beyond consciousness and had used the blood of a Great One to heal the sick and try to propel themselves to a new understanding of what lay behind the veil of the human mind. You see, you’re not fighting beasts, you’re fighting people. People who were sick. 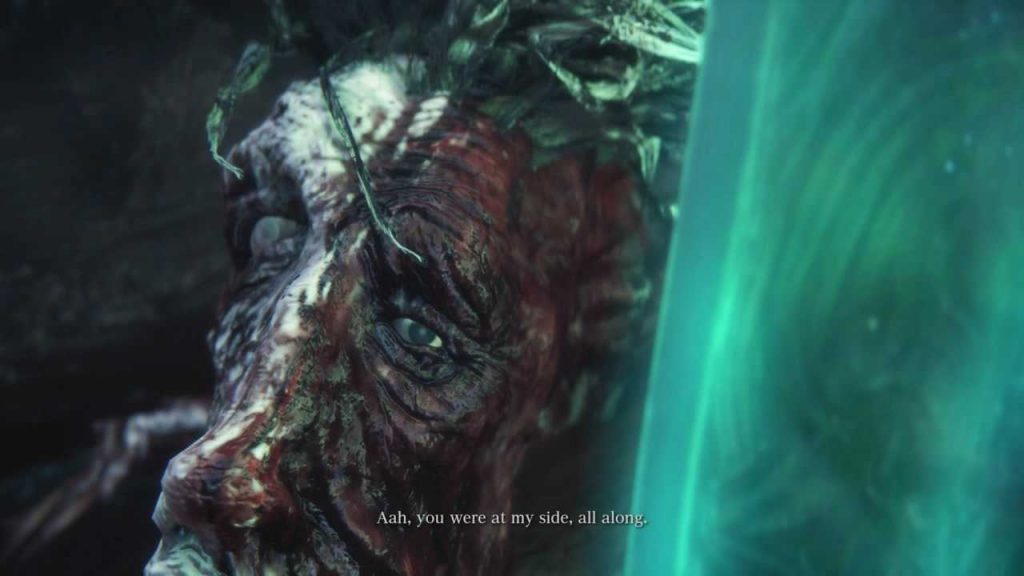 In the latter half of 2020, my mom had become ill and was diagnosed with an immune disease.

All of our family wondered, “Is there some cure we aren’t seeing?” A rare disorder that rapidly came about after what seemed like a bad cold. She was sick during a pandemic; moving her from place to place exposed her risk. She’s thankfully in an area that doesn’t have as many cases, but it’s still only a small comfort. I watched as people balked at health orders, decrying restriction of freedom; a government choosing to do a snap election; and a world that continued to prop up economies over people. If there was a miracle cure, would we risk it? And fuck the consequences of later? I don’t blame the Yharnamites; I blame the powers that be.

To cope, while we waited to see what would come next, I decided on a small goal for myself: I’d collect trophies and Platinum Bloodborne. I’d never Platinumed a game before. And, to choose Bloodborne, a game I wasn’t great at, nor one I appreciated the aesthetic of (like I had with Dark Souls), seemed a faraway idea, like many of my plans. But it provided purpose in a time when stressors were mounting. Let me fulfill the hunt here, somehow cast out the shadows, and gain control over my fate, even if it’s only imagined.

I scoured guides for hours. Fextralife became as frequently visited as if it were another social media. I devoured lore videos and cut content. I asked a friend to describe Prague to me as he noted the similarity to Yharnam’s architecture. I drowned myself in a world of gothic horror. Walking through the dark streets, I finally realized, I wasn’t helpless. Here, I was a hunter, and a hunter must hoont. For brief moments as I cut through violent phantasms of victims like myself, I felt powerful. If I could cut away enough at the rot, I could save this place. Imagining myself as a beast of legend that could tear apart humanity’s ills with violence was not a new dream to me, and now it was a pocket reality. 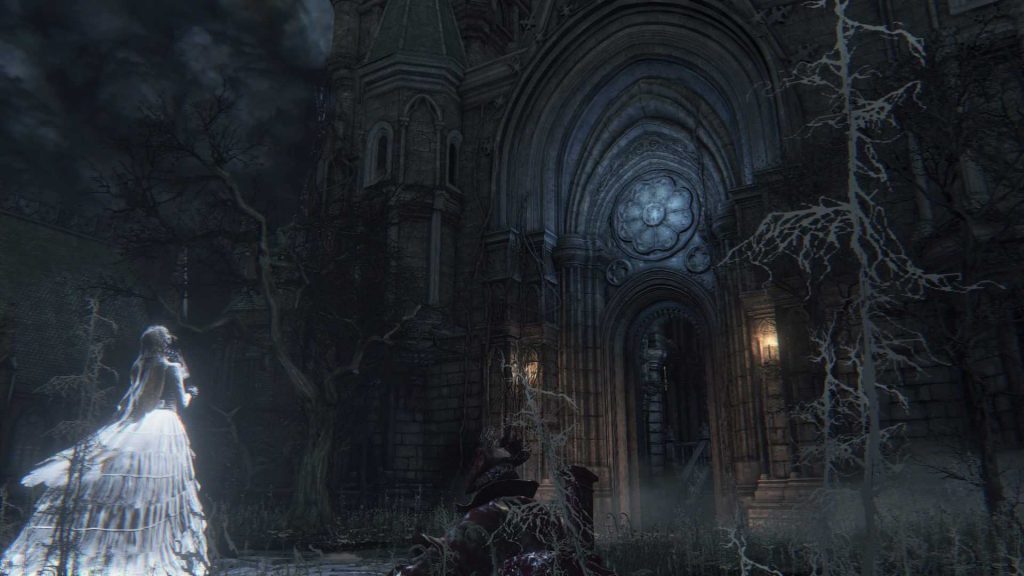 It wasn’t all loneliness. I would be remiss not to mention the countless other hunters who guided me on the path. Sharing knowledge and strength when I was lost—it made me feel a unique camaraderie. And I, too, in turn, would pass my knowledge wordlessly to another, bearing a torch as they would follow me into the dark. I was no stranger to summoning in FromSoftware’s games, but here and now, there was a bigger desperation to our struggle. Did they, too, feel at home in these dingy streets, as I did? Did fighting the beastly scourge with fire and steel give a measure of control to these souls during a global pandemic, as it did myself? I could only speculate as I managed a curt bow before fading into another dream.

After defeating his nursemaid, I sent off baby Mergo, a Great One’s offspring, with one final lullaby. With my hunter’s goal finished, I returned to the hubworld of the game, the Hunter’s Dream. The once-warm abode of a transformed chapel was in flames. The closest thing to a home in this world was disintegrating, and I could only watch. I feel, here, it was reminding me: this was never going to be forever. Maybe the hunter I took a hold of wanted this night to end, but for me, it meant I was losing purpose. Unlike other games where I faltered near the end, I pressed on, I had all I needed to see through to the final ending. All endings, in fact; with a memory stick, I could reload my saves and gain every much-needed trophy in minutes. Like the cosmic beings that moved the fates of men, I allowed myself glimpses of all possible futures. “Childhood’s Beginning” is the best one, and so I hate to admit “Yharnam Sunrise” makes me happiest. 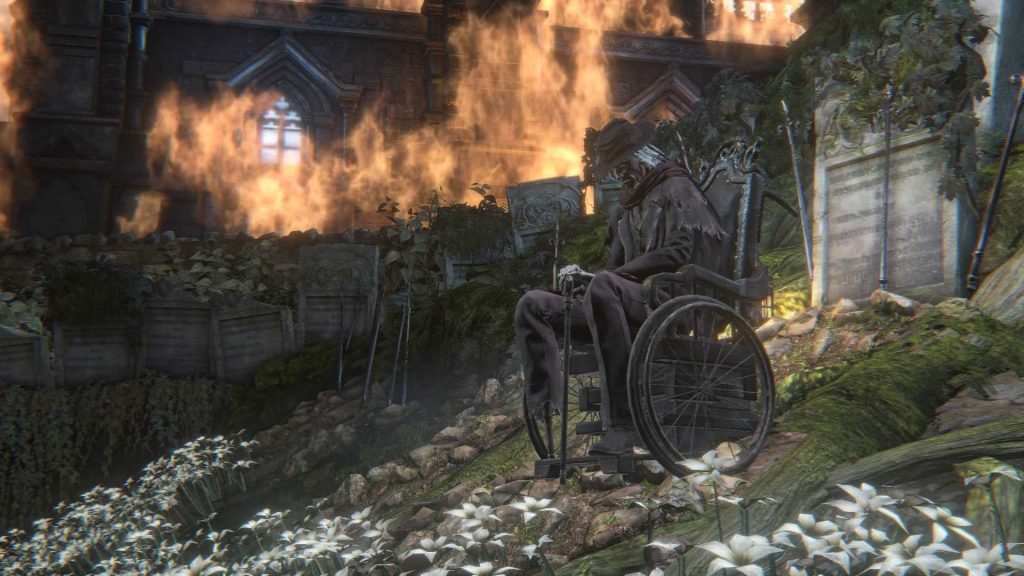 All dreams must end.

How wonderful it would be to think this was all a bad dream. Imagining that is a salve on the eve of bad news. We’ll wake up and things are peaceful; the sun is turning granite into gold, illuminating a beautiful city where I’m free of responsibility and pain. Either way, the dream must end, and so instead, I end on becoming something new. Will my memories of humanity help or hurt the people of Yharnam? When we’re free of looming sickness, will we move into a new beginning? I don’t want to return to “normal”; I want something better. Both for Yharnam and our dear Earth. I want this to be a lesson for governing structures in our fragility and resilience. The terror of death was not abated by steel-crushing bone, but by the hands of healers and the working class who needed to survive. So as much as I crave the sunrise, I know that’s a selfish wish. I can’t forget; none of us should.

After some regicide and plundering one more treasure in the dungeons, my journey ended. The Platinum trophy of a hunter blinked on screen. I did it, I Platinumed my first game, and it was Bloodborne. 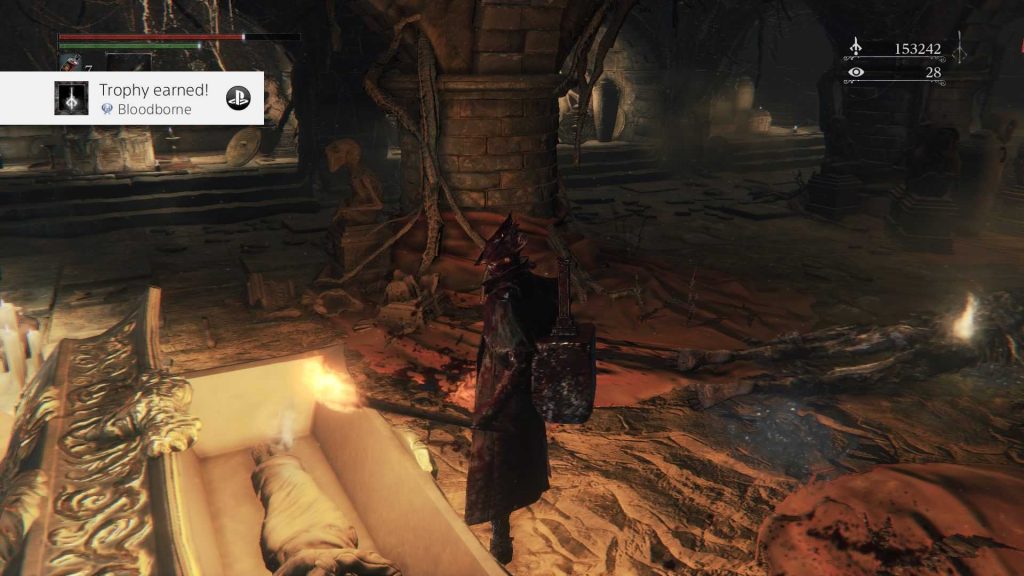 My mother’s condition has since stabilized. Only time will tell if it will go into remission. Like many in the world, she putters on. She’s stressed, but she doesn’t like to talk about it, so it manifests in other ways. I think it’s the same way she’s handled a lot of her pain; she can’t think about it. I think I’m a bit similar, and yet allow myself to whine. I can’t think of her dying; I can’t think of who around me may die. It’s overpowering, it’s painful, and it’s out of my control. I have trouble understanding exactly how to be stressed. I’ve heard the idea that we’re all experiencing a shared trauma, but I don’t think that’s true. Some of us are, and some of us aren’t. All of us keep swimming through the ocean regardless.

I still go in to help other hunters now and then. Lending what little strength I can in those dingy streets. I hope I provide some comfort, me and my kirkhammer, twirling around excitedly when I see the glow of another player. I can’t say I was “saved” by Bloodborne, but it helped me focus. Games have always helped me that way. In the waking world, I keep working, chat with friends over text, and donate to causes where I can. I’m trying not to focus on what I can’t change. Collective effort is the only way out of this; I need to be a small part in a bigger cosmos. But sending a message of encouragement or a good luck parcel, or even helping out a player with a boss, is both small and mighty. Sometimes you don’t need to be saved. Sometimes you just need to keep going.

So thank you, Bloodborne. Thank you, FromSoftware…

Thank you for reminding me to press on.