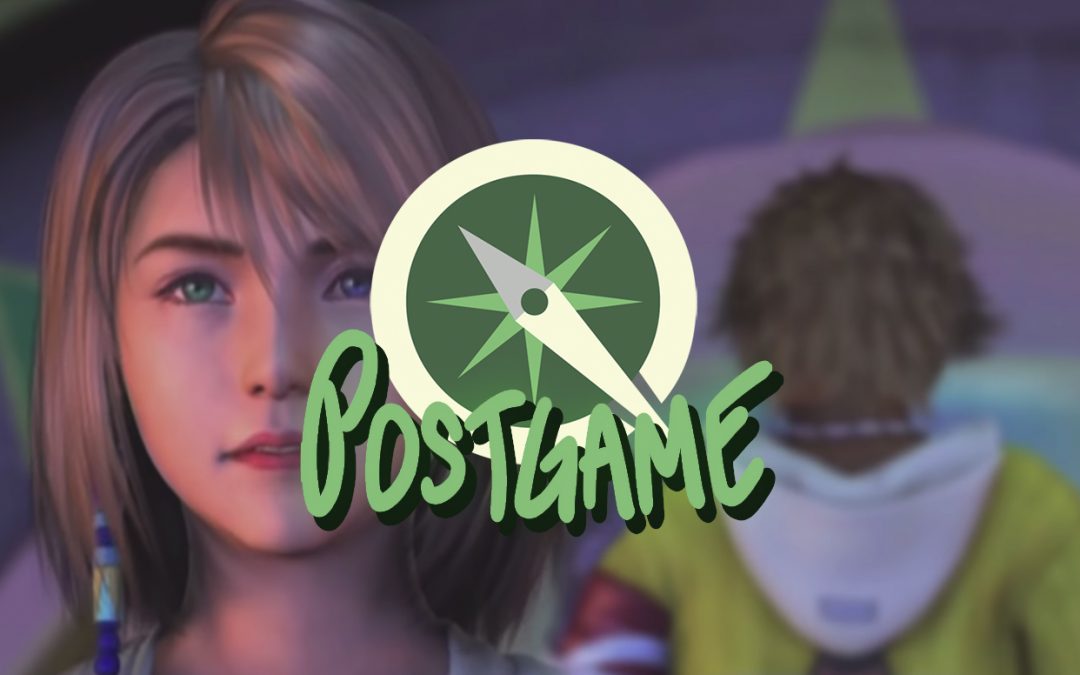 Welcome to Postgame, Sidequest’s monthly podcast, where the editors lay down hot takes on cold games. Most episodes are Patreon exclusives, but this month’s episode is totally free—just head on over to the public patreon post to listen to the full thing!

Come with us as we dive into a retrospective and review of Final Fantasy X, a game that is twenty years old as of July 17th, 2021. Over the course of the pod, we talk about what an excellent game does portraying cycles of grief, how Yuna really is the main character (and how the narrative both supports and undercuts that), the ways in which the game resonates with us now that we’ve got a few years of adulthood under our belts, and how Auron really extremely did fuck my dad.

Note that this episode (and clip) contain spoilers for the entirety of Final Fantasy X.

And something about this—so I’m turning 30 in like three weeks, and I have a lot of conflicted feelings about this. And I’ve just graduated from my second Master’s, and I’m not planning on going back to school. And we’re still in a pandemic, much to—[sarcastically] “What? We’re in a pandemic?” We’re still in a pandemic. Currently, Nevada and California are on fire, like, I can’t go outside because it’s so smoky. And there’s something about being in this climate, getting towards an apocalyptic world in the middle of a pandemic, as I am aging another decade that I didn’t even know I would reach and hearing the words—whether this world is mine, and whether the world is not mine—it just gives me a lot of feelings that I’m not sure how to process. So that’s what I wanted to say about that. There’s my three cents.

Naseem: Right. I mean, it was only—oh my god, at this point, I guess it was like, four or five years ago—but I was in such a different place emotionally at that point. And the world did not feel—I mean, the Trump presidency had just started so the world was still a dumpster fire. And it even before that had been a dumpster fire, but I think I’ve just changed so much in the past five years. And the world has—or maybe I should say my understanding of the world—has also really changed a lot that even in this short period of time. It just—yeah, it feels very, very different to me.

Zora Gilbert: That line’s really interesting, because it’s so hard for me to remove it from the very literal sense that it’s uttered in the game.

Zora: Because Auron secretly knows everything. And so when he says, “The world is not yours,” he’s like, “No, it literally it isn’t yours. It’s the plaything of this cruel goddess.”

And then the sea change is very much that, you know, they’ve killed the cruel goddess and also the big—the cutest demon, the cutest big bad.

He looks like a capybara or a tardigrade. It’s—anyway, Sin is a big old plushie. They’ve killed it, which means that they do actually have meaningful control over the world, which is very resonant to me. But every time I try to apply it to my life, I’m like, “Well, I’m still one of seven billion people.”

Naseem: Yeah. Well, certainly. You’re right. I understand the actual context of it. But this—I don’t know. Our world is fucked up. Our world has always been—like, our physical, actual, our reality world—has always been fucked up. And I never feel like I’m in control. I hardly feel like I’m in control of my own life half the time just because there’s—I mean, how do you feel in control of your life, when, for a year, we’ve been in lockdown, and people are going out. And I mean, this is probably the case everywhere, but in Reno, 95% of the people aren’t wearing masks, right? And it makes me feel so—and we’re getting new cases, like the new variant is in Nevada. And it makes me—everything is out of our control, I feel, and now I’m not even in school anymore. So it’s like the one thing that I was doing, I’m like, “Now you’re out on your own, kid.” And it feels very overwhelming. But, I mean, “This is your world now.” And I don’t want to say it’s hopeful. But in a sense, it’s kind of like an acknowledgment—

Naseem: “Yeah, this is what it’s like. So you got to do what you have to do.”

Zora: I mean, it’s both hopeful and it’s a responsibility, right?

Zora: It gives ownership to the new generation in a way that I think it’s really important for—to apply it to our world, in a way that I think it is really important for our generation to take ownership. I’m talking specifically about late 20s to late 30-year-olds—the “millennials”—because we’re not the kids that the media portrays us to be, frequently, and also that I think a lot of our generation still sort of feels like. We’re people who are ending up—we’re gaining positions of power. And even if we’re not gaining them institutionally, we have them in relationships now with younger generations. And so even if it doesn’t feel like our world, we need to take ownership of it if we ever want it to feel like our world. It’s not going to be given to us.

Melissa: Yeah, the sentiment that—again, when I played this as a teenager, I didn’t have the language or the brain capability to understand why this kind of thing mattered to me. But the idea that the story is essentially about a group of people doing what they think is right against totally unfathomable odds against them and succeeding despite that, and still having grief and loss, but also changing the world potentially for the better, but not knowing for certain because you can’t see the future—that resonated with me, then, the idea that eventually there was the potential for something different, and it still resonates with me now. Even though like I said, I didn’t really have the language for it then. And it’s something that I struggle with as a 32-year-old in this particular world. It’s very easy to slip into a doomer mentality. Also, specifically for me, my brain just loves that fucking slide at the playground, just straight down. So, you know, as corny as it might feel to other people, this sentiment still does resonate with me really strongly. And it’s one of those things where not everybody needs this reassurance, but fuck, I do! Like, even at 32 I’m still like, “That’s right. That’s right. It is!” And, you know, again, it’s not something that’s going to work for everybody in every circumstance, but like—I fucking need that reassurance that, yes, working together to do the best that you can is a worthwhile cause even if you can’t solve every single problem. That still resonates with me.

Check out the full episode on Patreon, and get access to other episodes of Postgame for just $5 per month !