Postgame.11: Can’t Be Alone with Our Thoughts 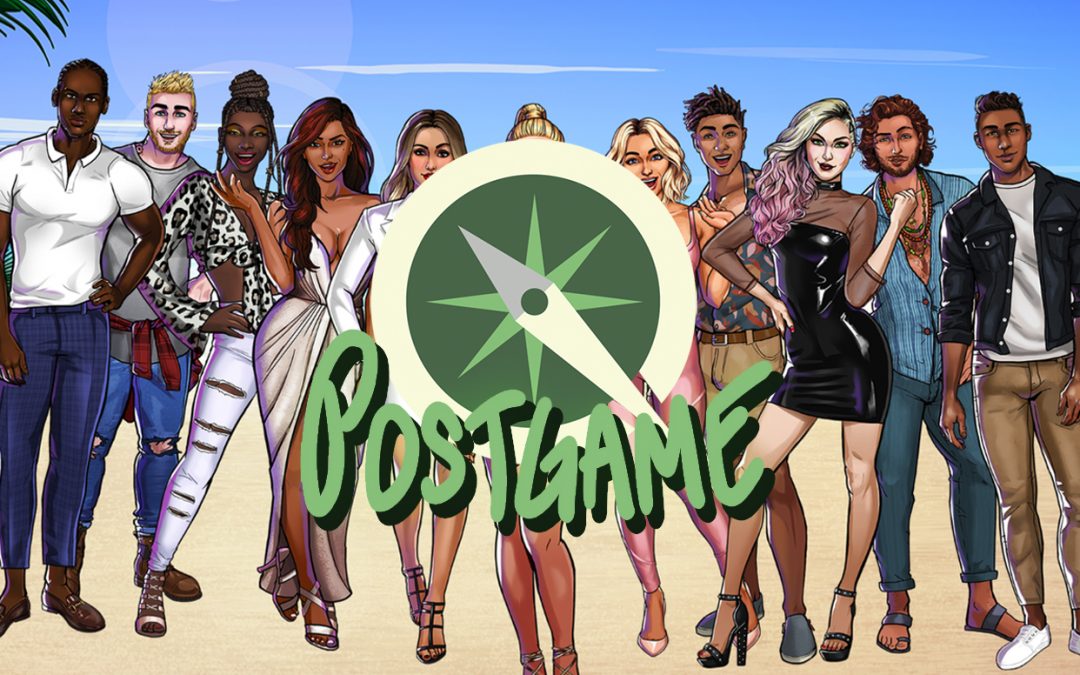 Melissa Brinks: In our Slack chat I just posted two screenshots, which I feel—

Zora Gilbert: I can—I am screaming at these. Not literally, because I’m recording, but internally I’m shrieking.

Melissa: There are two—

Melissa: There are two moods to Love Island: The Game that I have decided to tell through two screenshots.

Melissa: In the first, you have—

Naseem: The second one!

Melissa: In the first, you have two characters—this is Harry and Seb, and then my character is down at the bottom just chillin’. And Harry, after having a nice conversation with Seb about emotions and anger and dealing with difficult emotions—

Zora: Wait, I need to describe Harry’s face, because—

Melissa: It’s misleading. Seb is the one looking directly into the camera.

Zora: He’s got like a neatly trimmed beard. Full, kind of pink lips. And the most beautiful eyelashes I have ever seen in a drawing this small.

Naseem: And a nice eyebrow scar.

Melissa: Yeah. The worst thing about Seb is that he is not dateable.

Melissa: Huge point of anger in the Love Island: The Game community.

Zora: He’s wearing trunks with skulls and roses on them, but not in an edgy way. It’s just like—they seem casual.

Melissa: Yeah, he’s an emo boy, and he starts a podcast with the other undateable character from this season—

Melissa: —in the postseason when you all go on a cruise together.

Zora: Incredible. I’m sorry to have derailed, I—

Naseem: No, this is important derailing.

Melissa: I think that’s good for people to get the full experience. So Harry and Seb have just had this conversation that’s like a deep conversation about their feelings and about anger and that kind of stuff. And Harry is saying, “Yeah, therapy helped me out big time,” because they just had like a really—I think in season two and season three, there are in-depth discussions about the benefits of therapy. And specifically, the benefits of therapy relating to male characters—like the conversations—

Melissa: —almost always come up around male characters. The second screenshot I have included is my character looking very excited and saying, “I am so excited to suck a toe.”

And those are the two moods of Love Island: The Game.

Zora: Stunning. I will put these in the Patreon posts as the show notes because I—iconic. Iconic.

Melissa: Yeah, I’ve got some wild screenshots of this game. Also, every season begins with a discussion of consent.

Melissa: And it’ll often be around things like wearing a condom and that kind of thing.

Naseem: This is in direct contrast with—I used to play a lot of dating sims, like otome specifically dating sims that also have like gacha components, specifically by this company called Cyber. The two I played mostly—because the other ones you had to pay money or whatever—was Midnight Cinderella and Love and Magic in Wonderland. And yeah, there’s none of that.

Absolutely none of that. I mean, it’s very visual novel style. It’s not like you have choices or anything but uh, nope. There’s just a lot of supposed sweeping off your feet.

Naseem: I downloaded it. I’m excited.

Zora: Hold on. My phone’s in the other room, but I’ll download it later.

Melissa: Definitely play season 2 first, because that, I think, is the best one and then you all can tell me who your favorite and least favorite characters are because I’m dying to know.