You’re planning a summer barbecue. Which game characters are you inviting?

Melissa Brinks: My first gut reaction is Merrill from Dragon Age 2. I feel like she’d bring a delicious tea lemonade and that sounds so good right now that it’s chasing any other potential answers out of my mind.

Zora Gilbert: I just finished Pyre for the first time and I would give my right arm to have a nice, comfortable barbecue with Hedwyn, Jodariel, Pamitha, and Mae. I invited Bertrude but she told me that “We don’t have any need for your sunlit vistas and uninvitingly charred meats,” which I think was her way of thanking me for the invitation and politely declining.

Emily Durham: You know who I think would be genuinely delightful company at a barbecue? Zagreus. Any of his friends or lovers are welcome, too. Especially Sisyphus, Thanatos, or Dusa. (I say “friends” because Theseus is not invited.) K.K. Slider and Stella from Spiritfarer can come too; they’ll bring the vibes.

Elvie Mae Parian: I concur with pretty much inviting everyone from Animal Crossing. I think the Bard from Wandersong can collab with K.K. for a pretty banging playlist! Emily from Stardew Valley can also bring some funky (but fun) energy to the ambience. We also need to round up all the cats from Neko Atsume. For even more vibes. All the vibes welcome.

December Cuccaro: The boys from FFXV! I appreciate their commitment to wearing black even in the sweltering heat. It’s gonna be a goth barbecue.

Melissa: Now that I’m properly hydrated, I will be attending Emily’s barbecue with Merrill as my +1.

Maddi Butler: I’m inviting Link. He cooked for himself so much when I played Breath of the Wild that I bet he would bring some bangin’ side dishes. I also think he deserves a chance to sit back and relax while someone else handles the grilling. If he wants to bring Urbosa along as a buddy… I would not complain. I would also like to invite Lightning and Fang to my barbecue. Maybe we could bop on over to December’s. I think the interactions between Fang and Gladio would be fun to witness.

You’re planning a summer barbecue. Which game character is running the grill?

Zora: Do y’all think the player character from Outer Wilds would be a really good grill master, or do you think that’s a wildfire waiting to happen?

Emily: I don’t know about grill master, but Slate (the first character you talk to in Outer Wilds) would be an excellent sous chef. Read: they would most certainly sit next to you at the grill and be feisty in your general direction while they constantly poke marshmallows directly into the flames.

I also imagine Mae from Night in the Woods would be a particularly “helpful” sous chef. 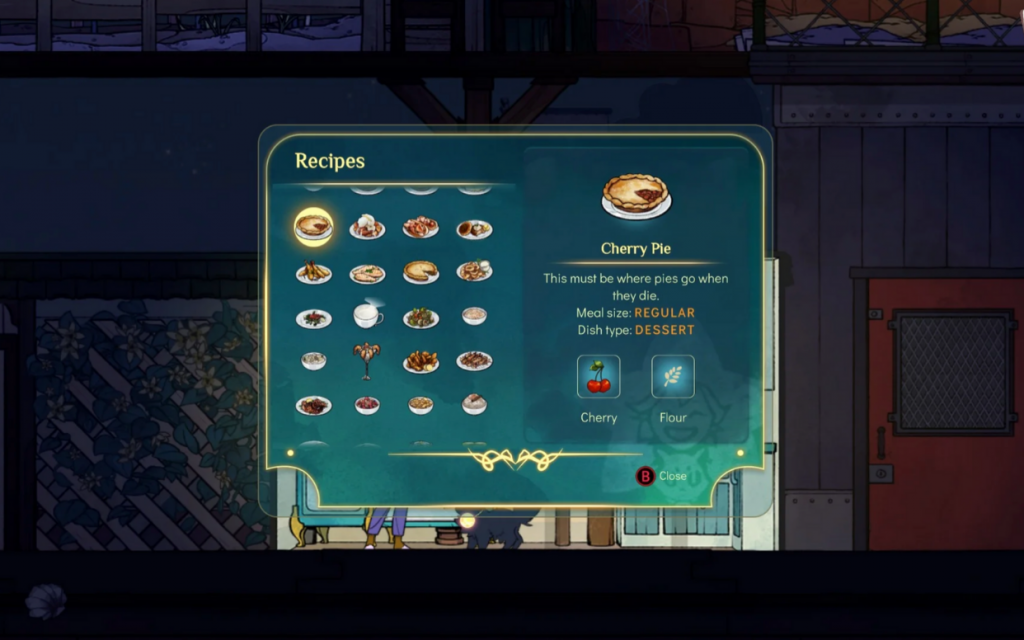 Elvie: With the variety of meals Stella from Spiritfarer has to make for her passengers at such high efficiency (even growing and sourcing her ingredients!), I can imagine she’d be a great cook to get the grill going fast especially for an eager, hungry crowd. Atul is definitely the uncle with great taste which would be reflected in his own cooking, but he might give in to temptation easily and eat most of his output.

But let’s also not forget Mama from the Cooking Mama franchise! She gets ish done and would probably step aside to encourage you to do things yourself. In fact, I can imagine her being sous chef to Kim Kitsuragi from Disco Elysium. He means business and often puts on a serious, professional face in order to deal with all the crap he does (and thus, I’m assuming he’s a good cook and meal preps weekly), but Mama is there to encourage him to lighten him up a little.

December: If it’s not Ignis, it’s gotta be Joker from Persona 5/P5 Strikers. The boy feeds eight starving teenagers on a daily basis, and he’s got a whole big set-up for it.

Melissa: This is a bit of a typecast answer, but I have to go with Soldier 76 of Overwatch fame. He has the skin for it, sure, but he also has incredible gay dad energy, and I want to see that at work.

Maddi: Ignis is definitely my first pick here, as cooking is his primary role throughout Final Fantasy XV, and I still frequently think about the mouthwatering food shots the game displays after you choose a meal. Plus, Ignis can even turn some basic Cup Noodles into an extremely edible lunch! Taking the events of Kingdom Hearts 3 and its cooking minigame into account, though, I also think Sora could pull his weight on the patio.

You’re planning a summer barbecue. Which game character is roasting atop the grill?

Zora: Listen. I’m not saying I condone cannibalism. But I do think Lendel (also from Pyre) very much deserves to be roasted.

Emily: Freddi Fish. Slap a little lemon and butter on there, and baby, you got yourself a… fish.

Elvie: Are Yoshi eggs just automatically fertilized? Might be also interesting to top a burger with sunny-side up sourced-straight-from-the-Yoshi egg. When grilled, will the mushrooms of the Mushroom Kingdom yield normal results or maybe induce hallucinogenic effects? We do need some sides. Throw a Cruelcumber and Zumeanie from Dragon Quest on a skewer and call it a day.

Emily: I forgot about Toad. Toad would be delicious grilled. 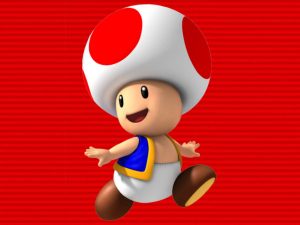 December : The game isn’t out yet, but… One Lonely Outpost has a robo-chicken that dispenses meat?? Where does it come from?? We’re gonna find out.

Maddi: Is Toad a mushroom? Does that make him the vegan option? There are too many grillable Pokemon to name, I think, but I bet you could make some nice skewers with Oddish, Foongus, Shroomish, and any of the chicken/beef Pokemon. Meat Boy is another obvious option. I’ve never played Super Meat Boy so I’m not sure whether there are some weird skeleton things happening inside that little meat cube body. For science, I would also like to grill a Dragon Quest slime.