Sneak Peek: Postgame.9 – What Does It Mean to Play? 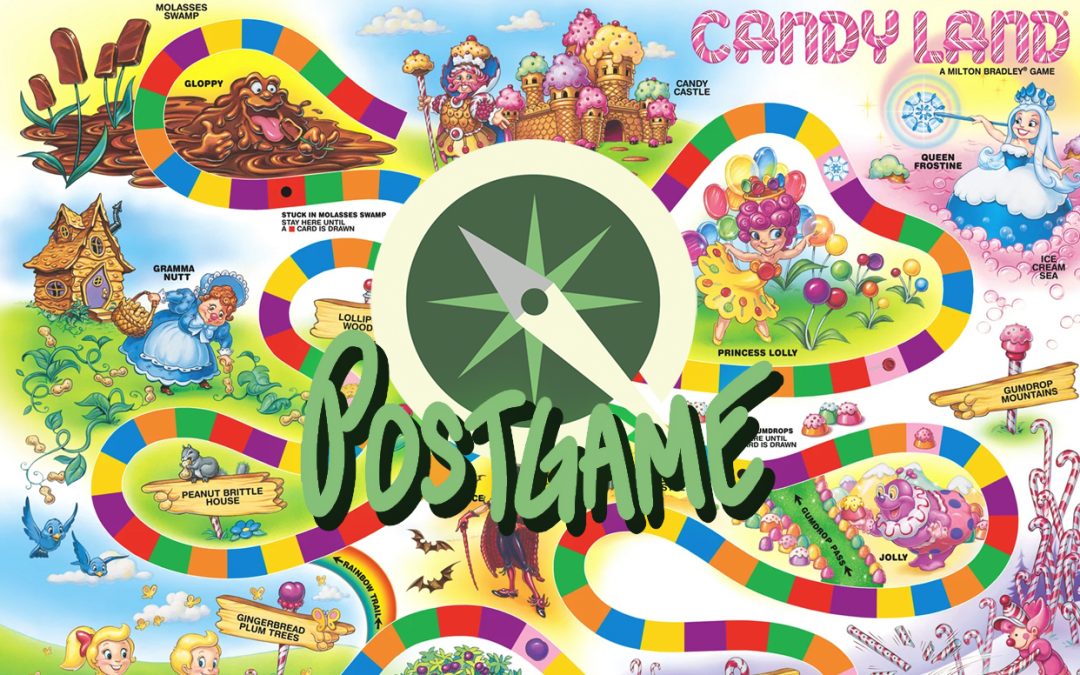 This month, we decided to compress an undergraduate semester’s worth of discussion into an hour and change with a look into what makes a game a game—and when that took about 30 seconds*, we moved on to discussing what “play” is and what the act of play means to us.

Melissa Brinks So, I’ve always had this resistance to the term gamer for a variety of reasons, like everything that has become associated with the word “gamers.” But even before I had really a concept of what that meant, I would not have called myself a gamer—I didn’t play a lot of games, or I didn’t play the right games or anything like that. But I’ve never had that problem with player. Right? I feel like the association between the idea of a person who plays versus a person who games is distinct to me. And I feel a whole lot more comfortable with the idea of myself as a person who plays rather than as a person who games because I feel like those are two distinct ways of approaching play.

Melissa: Like gamer has, to me, the connotation of almost optimization or achievement, whereas—that’s not how I play.

Zora: Yeah, I think there’s layers of stuff happening there, which is the academic way to say, “I don’t really know what’s happening there.” But I have thoughts—but I have guesses. And I think part of it is that one, I mean, there’s so much cultural, contextual weight put upon the idea of being a gamer, just because it conjures up Discourse, capital-D Discourse. But also, it is an identity, culturally. Even if we don’t look at all of the discourse around capital-G gamers, or the fact that that indexes directly into GamerGate, or any of that. People identify as gamers, right? It is an identity label that people purposefully put upon themselves, that they self-identify with, whereas player, as it’s used in contemporary speech, in general, inside and outside of gamer communities, is a role, a very specific role, that typically has a relationship to the game that is not simply engaging with it. So like to be a gamer, you are somebody who games, you are somebody who plays games, there’s this idea of commitment, or habituality to it. There’s like a commitment almost inherent in the identity. Whereas to be a player, you are a player of a game, right? No matter what game you’re playing, or with, with however much or with how much commitment you have to it. When you pick up the controller, you have become a player of the game automatically. Similarly, when you’re playing a tabletop RPG, when you engage with the RPG, and you play a character or you start roleplaying according to the rules as set out by the game, you’re a player. You can have a discussion maybe about whether or not the GM is a player—I think very, very strongly the GM is, but there are people who would disagree with me—but regardless, that being a player kind of presupposes that there is a specific game that you are a player of, whereas being a gamer is like a state of mind, baby.

Melissa: I really feel like you can be a gamer without playing, but I don’t know that—

Melissa: —you can be a player without a game.

Zora: Yep. Yeah, I agree. I agree with that. And I think it’s very funny and interesting.

Melissa: Yes, absolutely. It was something that—I was sitting there thinking about play and I was reading these essays by Bo Ruberg. And there was use of the word gamer, and I was like, “I wouldn’t apply that word to myself,” again, for a variety of reasons. But this idea of play and playing games is very compelling to me. And it’s interesting to me, about me, that I would situate myself as a person who plays rather than as a person who games as a verb.

Zora: I just think all of this is also particularly funny because the episode that we just published, which was our My First Game episode, I titled it “Gamer 4 Life.”

Off of something that I specifically said early on in the podcast, and also I said very facetiously because I feel the same way. I wouldn’t particularly ascribe the identity “gamer” to myself. But I do think that I’ve spent much of my life in play, and even in play of video games, specifically. That’s just—I don’t know. It’s interesting. I don’t have a conclusion.

Melissa: No, I totally agree. It’s just interesting to me. Naseem, please. Do you have thoughts?

Melissa: Thoughts on being a player or a gamer?

Naseem: I think it’s interesting because for me, hearing the word gamer definitely does evoke video games specifically, and when Zora was talking about tabletop games—they are a form of play, right? But the way that I conceptualize the word gamer, I definitely don’t think of like, oh, when you’re doing a TTRPG you are playing a game.

Zora: I’m absolutely gonna start saying I’m a gamer. And when people are like, what do you play? I’m going to be like, “Apocalypse World,” and they’re gonna be like, “What’s that?” And I’m gonna be like, “Okay, it’s this really cool system. You roll 2d6. It really kind of was part of ushering in this new age of indie RPGs.” Whoever I’m talking tot is gonna be like, “Okay…”

Melissa: I love it.

Naseem: I love it too. But I find that that to me is interesting, too. It feels almost like—I don’t know whose legitimacy, but like a term of legitimacy, right? Like you’re a capital-G Gamer. Which is silly. But I think when you’re talking about identity stuff, that does come from a place of someone gatekeeping—or I was the way that I’m hearing it. Like, who gets to be these terms? And then choosing not to identify with that is like a direct eschewal of that-ness. Wow, words.

Zora: Yeah, like the implicit values of the people who typically and loudly hold the identity.