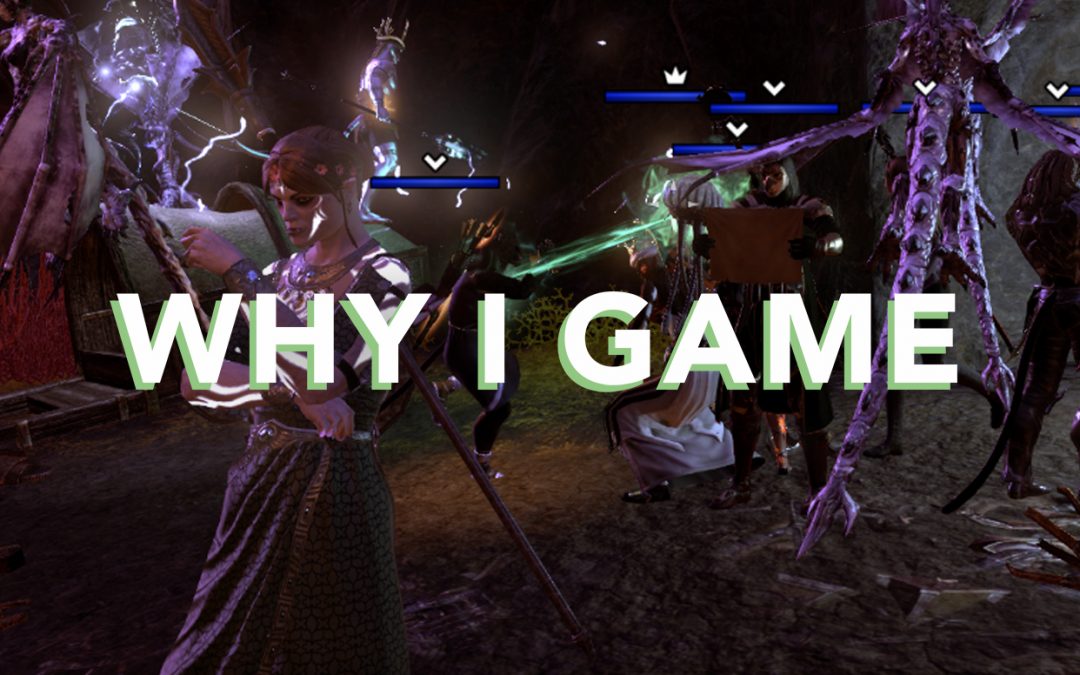 This winter, while my peers managed their seasonal sadness and pandemic isolation by taking up hobbies like baking or origami, I doubled down on questing and grinding in the vast digital sandbox of Elder Scrolls Online.

I was already a daily user, even before my job and life went virtual; every day there is a small and often useless reward for logging in, like a 50-pack of health potions my healer doesn’t need, or a non-combat pet that trails along behind her as she sprints through otherworldly forests and deserts. Even before the nights got longer and darker, my orc sorceress (orceress?) fulfilled the main quest by defeating a powerful godlike being who wanted to invade the mortal realm, completed story quests in every kingdom, and became a vampire. Elder Scrolls Online is my first MMORPG, and at first I mostly avoided other players. I quested, crafted, and completed seasonal events on my own steam, building a balanced character that could withstand most of the environmental hazards across the map of Tamriel. There is a lot of game in this game; even after a year and a half, I can’t claim to have played all of it.

But once I’d mastered every craft and decorated each of my five homes, there wasn’t much left beyond player-versus-player and cooperative dungeons. I didn’t feel ready to visit the only part of the map where you can be attacked and killed by other players, so I joined a hot-headed in-game gang of NPC warriors called the Undaunted.

Undaunted quests require teams of four players—a healer, a tank, and two damage-dealers—to clear a dungeon and take down half a dozen bosses. If you don’t know any other players, you can opt to be randomly matched with strangers whose skills complement yours; my orceress had ample restoration spells to keep herself alive while questing solo, so I queued up as a healer.

Dungeon team interactions vary wildly in Elder Scrolls Online. Sometimes you’re a spare tire for a team of seasoned guildmates; sometimes you match with a pick-up group, all randos. Some players wear headsets; I do not, so I just listen as my fellow dungeon delvers chat amiably amongst themselves or as one solitary player keeps up a running commentary as we go. I’ve learned a lot of dungeon jargon and etiquette from these monologues. On other occasions, all four of us are muted and communicate only by text chat or the nonverbal gestures of our pixel avatars.

It’s not all fun and games. Some players barrel through dungeons at top speed with swarms of monsters at their heels; if you stop to loot a corpse behind a speedrunner, you risk being mobbed. I’ve been kicked out of a dungeon more than once—usually when I was experiencing a bug that caused my screen to freeze during a lich attack, resulting in my orceress getting knocked out while I restarted the game. In another instance, the team voted to boot me after we got wiped out three times in one of my first veteran dungeons. Are you not a healer? typed the group leader into the chat. If you think you are, you need to read a guide. Rude, I replied before being removed from the zone, but my confidence was shaken. I hadn’t read a guide. I hadn’t built my vampire orc sorceress healer to be a dungeon powerhouse. I was sufficiently high-level to shepherd many a randomized group through regular dungeons and a few veteran dungeons, but perhaps I was no healer after all.

Mostly, other players are nice. Some dive into the fray with a cooperative spirit, casting illumination on lootable chests, waiting for lagging members to catch up, typing “gg” in the chat after a good battle. Even without the touching gestures, there’s little motive to be unkind. And at the end of the boss fight, there is a rush of social pleasure: chatty or not, speedy or not, each player has a role in the fight and it’s simply easier and more fun to do together.

And there’s the crux of the matter. In my old life, I commuted to work by subway. I shared an office and a breakroom. I took my laptop to coffee shops to write. I went to a dance studio for exercise, to bars for conversations with friends, to plays and concerts and nightclubs and tiny boutiques and bustling museums. I took trains. The pre-pandemic past is not just a foreign country, it is a crowded transit depot where I was elbow-to-elbow with other travelers almost all the time. Some of those interactions were funny or charming or heartwarming, and some were unsettling, and some were gross, but all of them contributed to my sense of place and belonging to where I live.

These tenuous relationships with coworkers and acquaintances and even strangers are called weak ties, and they are considered significant for forming networks and understanding your own identity within a community. And in my pandemic year, they have been largely absent. I’ve kept my loved ones close (albeit no-contact) with video calls and masked and distanced walks, but the rest of the world has practically vanished.

So I run dungeons with strangers, and I listen to their banter or watch it scroll by on my screen, and I trade gear I don’t need and click the “applause” emote before I log out. Once I got comfortable with dungeons, I tentatively began buying and selling loot on the text chat. I joined a guild for orcs, got kicked out for some reason, then joined a friendlier guild with a punny name. I group up with my guildmates for world boss hunts. I dipped a toe into trials. 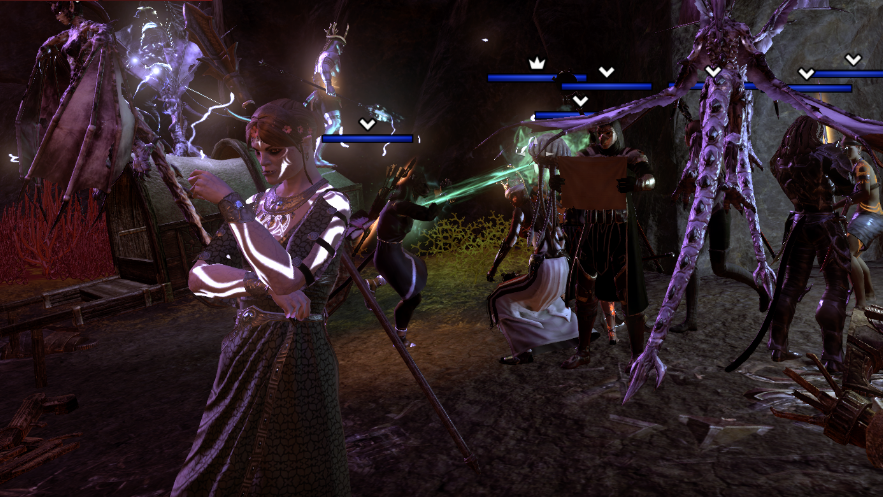 Trials are like dungeons designed for teams of twelve, and joining one is a time-intensive affair. My guild coordinates them on Discord; otherwise, you have to travel to a city in Craglorn that serves as Tamriel’s Mos Eisley Cantina, where players hang around and fight duels waiting for someone to type “lf healer” or similar into the zone chat. Once you are added to a group that is looking for a healer, there is another wait as the group leaders change armor and compare stats over voice or text chat.

“What armor are you wearing?” someone asked me on my first trial. I typed my response laboriously into the text chat: a two-piece set with a healing bonus, which I earned after completing my first veteran dungeon, plus five pieces of a magicka-damaging set I’d crafted myself. I hadn’t brought anything to change into. I barely had enough inventory space for dungeon plunder.

“Hmmm,” said my teammates, but moved along. One group leader asked if anyone was new—not just me, fortunately—and she encouraged us all to stay with the group and use synergies whenever possible. As we battled an enormous slug creature, she called out instructions on the voice channel: Close the crystals. Stay on the tail. Heals, please.

The boss tumbled down. I didn’t even die once.

Afterward, the voice and text chat buzzed as teammates swapped loot to help fill out their own sets. “If you get any light armor you don’t need, give it to the healer,” commanded the group leader’s voice. I was bombarded with invitations to trade, and found myself with a full set of light armor with a healing bonus.

I was sorry to let go of my crafted armor, but when I equipped everything they gave me, I had wings. 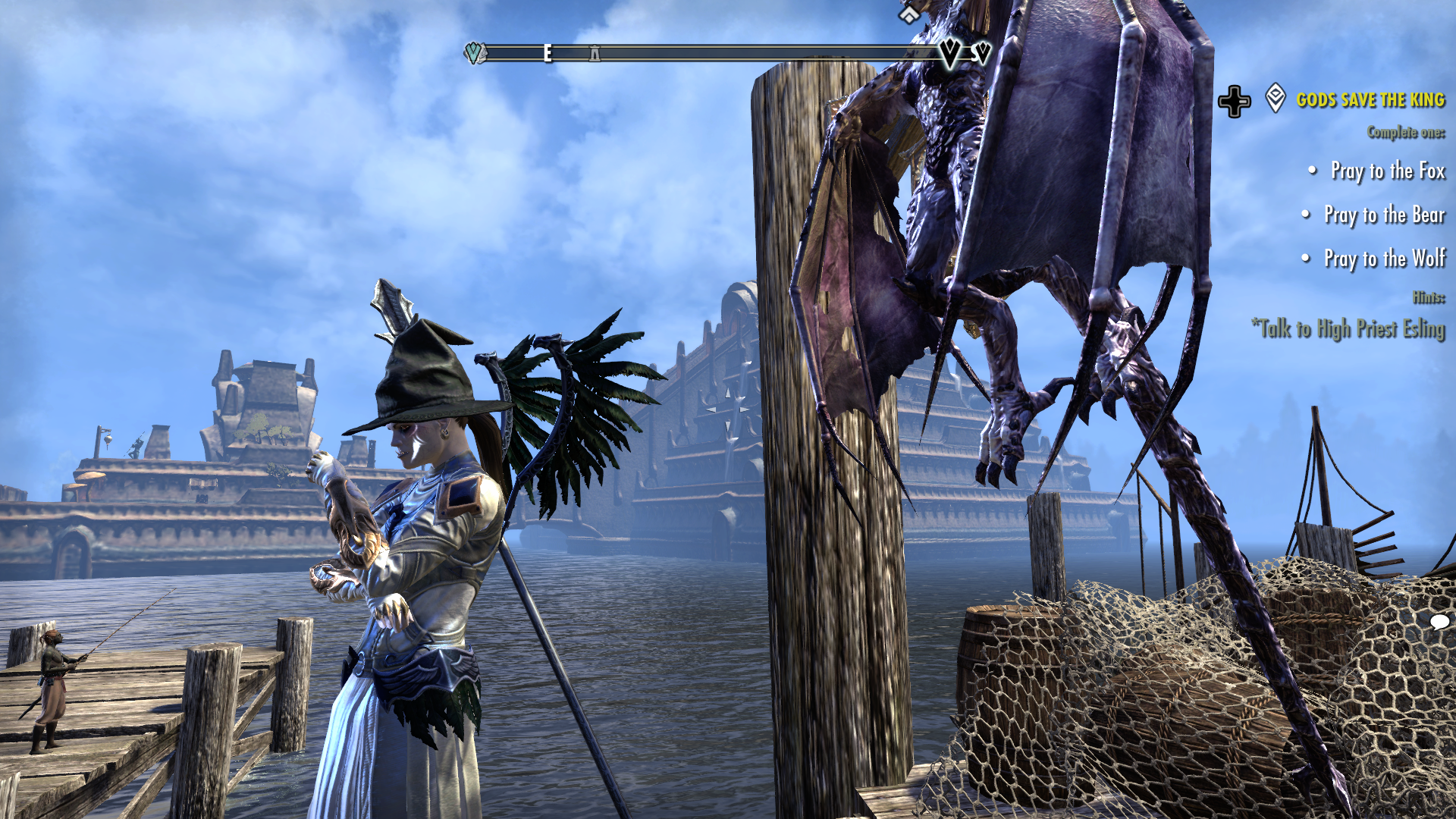