I’ve been uncomfortably conscious of my body since a pretty young age. When it came to food, I was a fussy child, which resulted in me being overweight. In turn, adults would feel like they were entitled to comment on my body. I have a specific memory of eating a Yorkie (a plain chocolate bar, for non-UK readers) and a stranger harassing me on the street about it. My school’s principals once contacted some form of authority, I can’t remember which, about my fussy eating, which in hindsight broke some serious boundaries. The doctors weren’t even concerned, as other than being overweight I had no serious health issues. But everyone else always had problems with my body.

A few weeks back, a friend asked me a question while I was streaming Stardew Valley. They (also nonbinary, curious on my perspective) wanted to know what I do in games with character creators in relation to my gender identity. I didn’t really have an answer for them.

I can point at an amorphous blob and say “big mood,” but not in a derogatory way.

I think about the body a lot, digitally or otherwise. It’s not necessarily by choice that I think about the body, and my body specifically—I almost have to so I can protect myself. That’s part of why I like body horror so much. It’s a genre that explores the physical form in sometimes very abstract ways. The movie Annihilation has multiple characters who abandon their body (by choice or not) and bond with aspects of nature; Akira is about the effects of nuclear war on the generation born into it, and how their bodies are changed because of it; Inside’s ending raises questions of free will and its connection to the body you inhabit. I mention these titles specifically because of how much I love them, and how oddly seen I felt by them. They tell stories that focus on the complexities of consciousness, identity, and how those two things intersect with the body. Part of how I know my gender doesn’t fit into the binary is that I can point at an amorphous blob and say “big mood,” but not in a derogatory way.

Being fat, AMAB, and nonbinary means I don’t always get to see myself in popular media, even though NB actors are popping up more and more. So naturally, I look to games and character creators to try and be myself. More often than not, I’ll make an approximation of what I look like. I select parts that resemble aspects of me, because I’m rarely able to have all of the traits that make me up as choices in a character creator. This is what I did for Stardew Valley: I gave my character dungarees, my signature outfit, and long dark blond hair, but I wasn’t able to make myself fat. Other times, I’ll make a character unlike myself, in an attempt to explore parts of my gender identity safely. In Final Fantasy XIV, I decided to play as a Viera (a rabbit person) named Toast. I made her as big as possible, but there are severe limitations to that, and she was still very skinny. Her body was nothing like mine, except for the fact we had long hair. She wasn’t me, she existed in her own world, and the kind of person she chose to be was up to me. I did love playing as her, even with these differences, because she was a way I could explore femininity, something my masculine, broad-shouldered body might struggle to do—or more specifically, because of those features of my body, something I’m afraid to try to do outside of games. 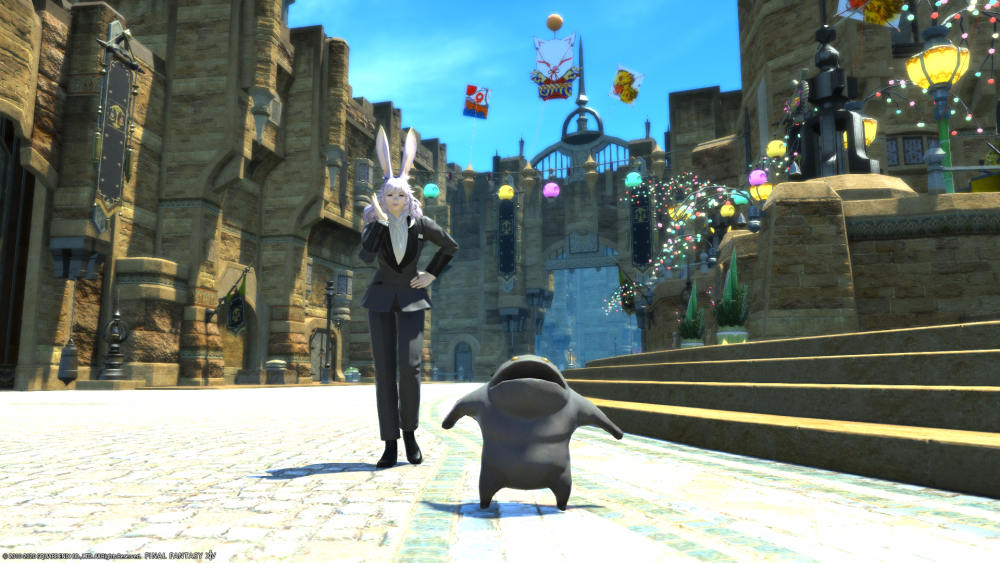 Ironically enough, I don’t feel afraid when I watch or play most body horror. Often, I can look at an extremely non-humanoid being that represents the body and think “relatable.” There is no sense of discomfort, no sense of unease. So it’s funny, to me, that I feel those things in video games, in genres that aren’t designed to be so. I have to resign myself to the fate of playing someone else most of the time, even in a game with a dedicated character creator. Sometimes I do want to roleplay in a fantasy world like that of Dragon’s Dogma (a game that actually lets you be fat)! But sometimes, I want to be a queer, fat farmer. Or a nonbinary, chubby, humanoid bear barista (this is my job in the real world, but I’m not a humanoid bear, so there is a difference). I want to craft my own stories about a fictitious version of myself, one that is competent at sowing the land and reaping crops. Character creators can mostly only ever offer a modicum of power to the player. The limitations of most character creators say to the player that they aren’t an author in this story, but a spectator of someone else’s, even if you can somewhat decide how that someone looks. To liken it to my real-world experiences, it comes back to that knowledge that everyone else has problems with my body. My real body has to look a certain designated way, and in turn so does my virtual one. The mould doesn’t adjust to fit my needs, I have to fit into it, every last love handle.

My real body has to look a certain designated way, and in turn so does my virtual one.

I crave a sense of authorship in games. I’d love to tell my own story in someone else’s world. It makes me envious of those who make body horror. They get to figure things out about the body, but they also have to put an amount of labour into making the thing. Why can’t games give players the tools to do that experimentation? Why do we have to experience other people’s stories, or make our own? The simple answer is that game development is complicated, and these things are much easier said than done. Every feature added, in any aspect of development, means more time, and more money that needs to be spent. In an ideal world, the player would be provided all the necessary tools to explore their identity. They would be allowed to make eldritch horrors in a character creator if that’s the way they want to present in a digital landscape. Not every game needs to let the player present as an unthinkable creature (that wouldn’t work so well for Stardew Valley), but they should let you be fat and genderless, and specific customisation options shouldn’t be locked behind gender. These things should be a high priority for a character creators—an RPG shouldn’t call itself that if players can’t roleplay as someone that reflects their image of themself. Any change we have seen has been incremental: Skin tone options are very common in games, but that doesn’t mean that the options cover all types of facial structures. Black hair types, something fans actively sought after, weren’t added into Animal Crossing until months into the game’s release, and disabled people in games are few and far between.

I know that, most likely, the answer to the overall question of “what the hell should I do about this?” is to tell my own stories, and to try and platform the marginalised so they too can see themselves, particularly fat, gender non-conforming, POC, disabled people, and the intersection of those groups. But creativity can be exhausting, and games are meant to be recreational. Having the tools to make art, in any of its forms, is often a difficult thing. There are frequently huge class barriers that prevent people from doing large-scale creative work, from the cost of expensive cameras, to networking locked behind costly higher levels of education. While still often economically inaccessible, games can at the very least be a less expensive purchase that might let you explore some kind of world for however long the game might be. But if I put in a disc or cartridge and am told “this isn’t you” through the limitations of the software, what can I do but feel discomfort and unease? How can I do anything but be wary of my own body? The absence—the implicit othering—of the non-normative body is dangerous and is more horrific than any film or game could ever be. For now, I’ll stick to watching and playing body horror, and try to figure out the body I want to inhabit as best I can.