Neither/Nor: The Gender Politics of the Cyberpunk Character Creator 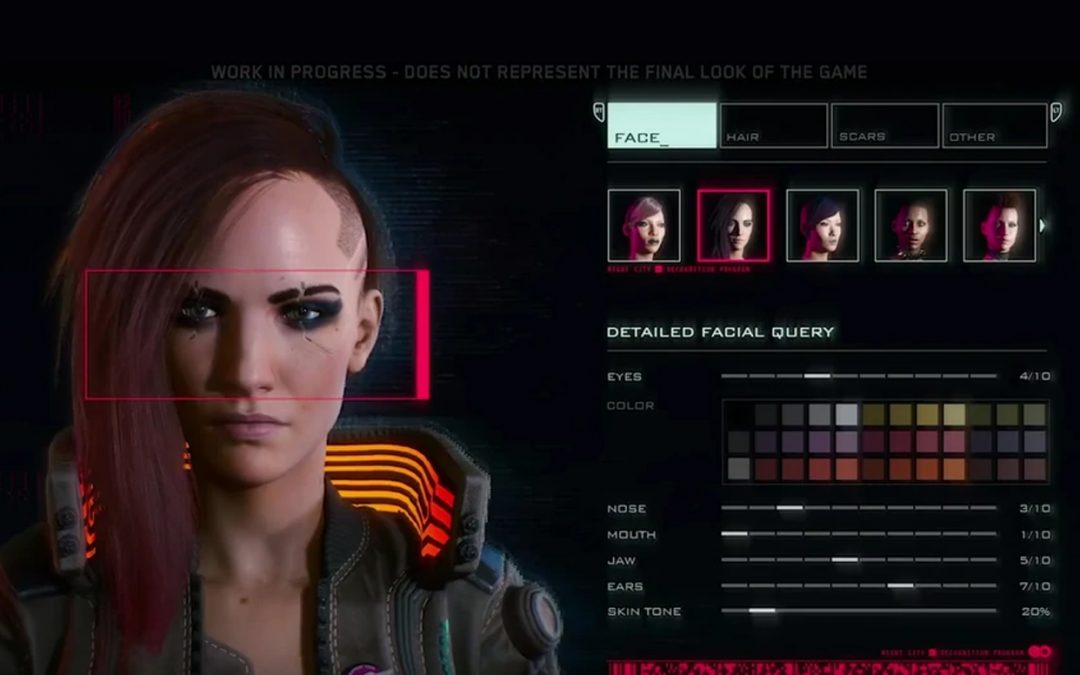 I’ve never particularly enjoyed character creation in video games. That isn’t to say I didn’t care about it and went with a preset default, because every time a character screen was presented to me, I really attempted to do my due diligence. I just always struggled with making a character that I was satisfied with and ended up with an avatar that I felt mediocre about or indifferent toward.

Until, that is, I played Cyberpunk 2077. My choice to play 2077 is already kind of a fraught one; much work has been done on not only the technical failings of the game, but also its many theoretical and ideological shortcomings, typified by an obvious and rampant transphobia present across a lot of the game’s marketing.

I booted it up and took it for a spin, starting, obviously, with the character creator. And there’s no denying that the creator is, like the rest of the game, pretty darn busted: not on a technical level necessarily, but on an ideological one. The frank depiction of various genitals that includes flop-physics as you click through the wheel of options seems a bit sophomoric, like a middle schooler is giggling behind their hand. Instead of an attempt at diverse and inclusive portrayals of the self, this feels more like a very crude joke that the devs put in to appeal to a highly mythologized form of gamer. But that doesn’t mean it didn’t still, however unintentionally, lead to an experience that was affirming for me in its own strange way.

Before playing Cyberpunk 2077, one thing I absolutely never did was attempt to make a character who looked like me. I’m short and fat, and so the default options for people whose faces looked kind of like mine rarely resembled me from the neck down. Most of my characters ended up looking like someone else, but all, in some ways, flouted traditional standards of attractiveness: My Dovakhin had a giant scar on their face that left them blinded in one eye, my Inquisitor had gigantic ears and a large, pointy nose, and so on and so forth. And sometimes I enjoyed these characters and grew to love them, but I never left the creation screen with anything other than a lukewarm feeling in my stomach.

But that doesn’t mean Cyberpunk 2077 didn’t still, however unintentionally, lead to an experience that was affirming for me in its own strange way.

The character creator in 2077 is, to put it mildly, a little goofy with all of its over-the-top cosmetics. But in addition to all of the cyber face implants and pseudo punk aesthetics you can engage with, it’s the first game I’ve ever played that goes beyond a simple “male/female” binary when selecting body type. Instead of checking a column and getting a single set of sexual characteristics you can tweak (tits bigger, waist smaller, etc), the game breaks your character up geographically, asks a set of questions that I hadn’t encountered in a AAA title before, and separates each trait from each other.

So, yes, here I am sort of talking about the seven different penis models you can select for your character, which is, again, silly, but I’m also talking about more than that. Your character can have one of seven penises, or they can have a vulva (the lack of options in terms of the latter is a whole other can of worms, because there’s clearly not a single universal vulva, so it says something about who the developers expected to be playing). Your character can have breasts or no breasts, and the type of genitalia you choose does not impact the ability to also have breasts or the available face models. You have total freedom to construct a character that exists outside of a prescribed set of sex traits, which was something I’d never seen before, even if it is couched in what might be a juvenile laugh about dicks. But what was most significant to me about this character creator is that while it was the first game I’d played to offer explicit genitalia options, it also let me opt-out. There’s a “N/A” option where your character does not display their junk and wears a pair of discreet undies. And this utterly blew my mind.

What this has all been building to, in its roundabout way, is that I’ve got complicated feelings about gender. I was assumed to be a woman at birth, and if you look at my name, photo, and pronouns in my bio, you can see that I still present as outwardly female. But I’ve recently realized that, despite living as one for 27 years and likely continuing to present as one for the foreseeable future, I’m not a woman. I’m also not a man. I’m not anywhere in between, and I don’t fluctuate between them. I’m not on the axis at all.

I was given the choice to build myself into the world, using the tools of the game instead of my imagination.

I was introduced to the word “agender” several years ago, but I’ve very recently come around to it as an accurate descriptor of myself. My general discomfort with gender isn’t that I feel like people think I have the wrong one; it’s that people assign one to me at all. I don’t dream about existing in a different human body—I’d earnestly prefer to be a floating consciousness with no defining physical traits, or maybe a faceless chrome automaton. “She/her” doesn’t feel correct, but neither does “they/them,” and “he/him” doesn’t feel wrong in any more significant way than the other two. I don’t really intend to change any of the ways I present myself because I kind of feel that there’s no way to change my presentation without people still assuming I exist somewhere along that “man-to-woman” axis, and I don’t. But there’s no “not applicable” option.

Except in Cyberpunk 2077 there quite literally is. In other character creators I’ve used, there’s no genitalia selection, but the gender selection implicitly brings with it an understanding that your character has a specific set of junk. By presenting us with a rolodex of penises, a vulva, and an explicit “no, thank you” option, 2077 lets me make the conscious choice to play as an agender character in a way no other game has before. Sure, I could always pretend and headcanon and roleplay as if I were, but it’s the difference between doing that and the scene in Outer Worlds where the player character has dialogue that can establish themselves as canonically asexual (which made me cry a little bit when it happened). I was given the choice to build myself into the world, using the tools of the game instead of my imagination. So, while that character also ended up looking nothing like me, she/they/he (posed as such here to reflect my own lack of attachment to any one pronoun, which I see reflected in how I have built this character) represent the truest expression of myself that has ever come out of a character creator.

All of this is not to say that Cyberpunk 2077 is actually great and progressive, because it’s definitely not; I don’t even think the mechanic I’m talking about was built into the game out of a sense of inclusion. But from this experience, we can take these ideas of character creation and build on it a better system—one where face and body do not come as a package that limits expression of gender, and where people can design the presentation of their characters in a way that reflects the rich lived experiences of nonbinary, gender-nonconforming, intersex, and “404 gender not found” folks like me. So maybe out of this weird, bigoted, buggy mess of a game we can start building some truly punk futures that say “fuck this gender binary nonsense.”

At least, that’s the hope.