Six Days In Fallujah Is Just More of the Same 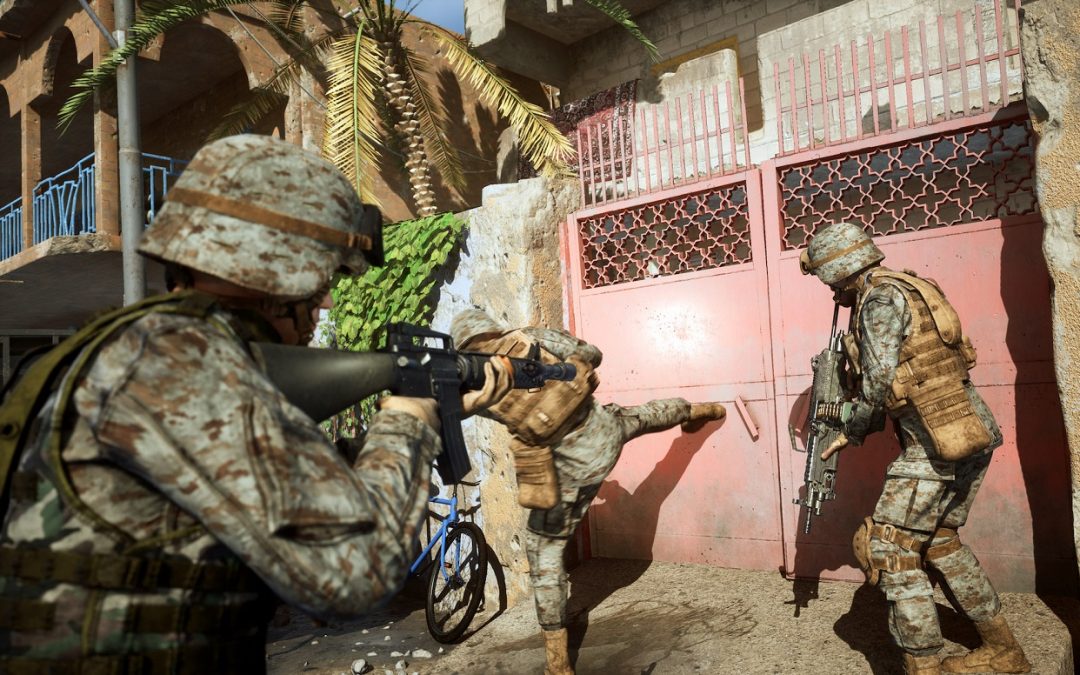 It’s not unusual for games—which are challenging and time-consuming to develop even under ideal circumstances—to undergo lengthy, decade-spanning development cycles. One of the most recent games to emerge from development hell is Six Days in Fallujah, which is less notable for the length of its development cycle than the political messaging at its core.

Atomic Games and Konami first announced Six Days in Fallujah in April 2009, describing it as a realistic third-person shooter based on the Second Battle for Fallujah, which took place during the Iraq War in 2004. The concept received such a strong negative reception that Konami, the initial publisher, dropped Six Days in Fallujah just three weeks after it was announced. Despite Konami’s announcement, a smaller team continued work on the game with partial funding from publisher Destineer. On February 11, 2021, Victura announced it would publish Six Days in Fallujah later this year, with Highwire Games signed on to complete development.

Since this second announcement, Victura founder and former Atomic Games CEO Peter Tamte told Polygon that Victura wasn’t “trying to make a political commentary about whether or not the war itself was a good or a bad idea.” This commentary—particularly Tamte’s insistence that the game isn’t political in nature—sparked significant backlash and discussion. While much of that discussion focused on whether a game about war could be apolitical, I’m interested in the broader scope of the question. What “makes” a political game? What does it mean to be political? And, finally, why is apoliticism something to strive for?

What I’m not interested in is arguing about whether Six Days in Fallujah is a political game. Victura stated on their website that their aim is to “challenge outdated stereotypes about what video games can be” by “bring[ing] players closer to the uncertainty and tactics of modern combat than other video games.” In Six Days in Fallujah, they plan to do this by creating “the most authentic military shooter to date” that allows players to follow in the footsteps of the U.S. troops who were actually there.

There’s an implication that truth or objectivity in the telling of these events separates the game as a whole from political leanings.

Shortly after the Polygon interview linked above, Tamte told Business Insider that even though critics assume the game will “whitewash decisions that were made by the United States and Great Britain and Iraqi leaders at that time,” he doesn’t think it’s possible to portray the Second Battle for Fallujah without the underlying context of the events leading up to it. As of early March, Victura perhaps realized the futility of attempting to depoliticize political conflict. In a blog post, the company stated, “We understand the events recreated in Six Days in Fallujah are inseparable from politics,” and went on to highlight the steps they’ve taken to include different perspectives, including interviewing dozens of (presumably American) civilians and service members and 26 Iraqi civilians for documentary portions of the game. However, as Rebekah Valentine reported for IGN, the reality is more complicated and painful than conducting a few interviews. It isn’t just about whether a story is told faithfully, but about which stories are prioritized.

Despite the heel turn on Six Days‘ marketing messaging, what I get from these comments is that Victura still, in a sense, wants to have it both ways: a game that portrays an unequivocally controversial war that can be marketed as an honest recreation of the conflict. The phrasing used in the announcement is telling: “the events recreated are inseparable from politics.” (Emphasis mine.) There’s an implication that truth or objectivity in the telling of these events separates the game as a whole from political leanings. Regardless of Victura’s intent, this phrasing creates distance between the events as political and the game as political.

Six Days‘ first gameplay trailer, released in late March, is a six-minute video focused heavily on the game’s procedurally generated elements and is interspersed with video interviews with U.S. Marines. The video focuses most on how the Marines never knew what would be behind a door, and thanks to the game’s procedurally generated map, the players won’t know what’s inside each building, either. That feature aside, Six Days in Fallujah looks like a standard realistic shooter, but again, I am interested in the framing of this reveal. Without explicitly saying so, the trailer is asking players to anticipate danger behind every door, even if the building contains civilians, and in doing so, establishes them as an “Other” and as a group to fear. Even if it’s true to the recollections of those who were there, the emphasis on the atmosphere of fear not only reinforces the idea that the American soldiers are exceptionally brave, but that their actions against the Other are justified.

Realistically, even beyond real-life political inspiration, all games are inherently political. This isn’t news; plenty of others have said the same. Games exist in the context of a larger culture, and culture, by its very definition, cannot exist in a vacuum; it’s influenced by factors like values, religion, geography, language, and, yes, politics. There are obvious examples of games representing political events and interests—Call of Duty, Wolfenstein, Medal of Honor, to name a few—but even cute and “wholesome” games can represent capitalistic and colonialist ideals. The conditions in which these games are made are political, too; studios relying on crunch to get games out on time is an issue of labor politics.

But more often than not, studios avoid acknowledging their political influences. In Josh Tucker’s essay for The Outline, “No shit video games are political. They’re conservative.” He lists numerous examples of AAA studio spokespeople publicly proclaiming their games’ apoliticism. Some of the more notable ones include that time EA made a game about World War II but refused to show swastikas or call German soldiers Nazis, and that time David Cage directed a game about android liberation that ripped its imagery directly from the American civil rights movement but ultimately, carried “no big message to humanity.” Since Tucker’s essay was released, Blizzard has also asserted its apoliticism by punishing pro Hearthstone player Ng Wai Chung for making pro-democracy statements during a streaming event, and Epic CEO Tim Sweeney called for keeping games out of “divisive topics” like political affiliation to maintain neutral platforms.

Games exist in the context of a larger culture, and culture, by its very definition, cannot exist in a vacuum.

Yet this emphasis on neutrality is as much of a statement as actually taking a side. “In labeling the tactic [of apoliticism] as cynical neutrality, even when correctly identifying it as toothless cowardice or gross duplicity,” Tucker writes, “there’s danger in glossing over the fact that it isn’t neutral at all: It’s an inherently conservative worldview.” The issue is that neutrality—declining to support either of two parties in conflict—assumes equal value between the opposing arguments. Refusing to take a side when one group of people says, “I deserve the basic human rights guaranteed to me by the foundational texts of my government” and the other group says, “no you don’t, because your existence makes me uncomfortable,” for example, suggests that there are situations in which discomfort is a valid reason to deny someone else’s humanity.

I can only speak to U.S. politics because it’s where I live, but in an increasingly fractured political landscape, neutrality is plausible deniability. Video games are expensive to make, and they are, first and foremost, products to be sold. To the massive companies making big, expensive games, reaching the widest possible market (to make the most possible profit) depends on a certain level of plausible deniability. Support—even perceived support—for one group means potentially alienating the other and losing out on sales.

As a result, brands attempt to tiptoe a razor-thin line between “our game is making a statement” and “our game means nothing at all.” It usually shakes out to something along the lines of “there are good guys and bad guys, but we want the players to play the game and create their own meaning,” as Six Days in Fallujah has done. Putting the onus of interpretation on the player is, for some players, an exercise in critical thinking and analysis. For others, it’s permission to mindlessly consume a piece of entertainment.

Without wading too deeply into the murky waters of “identity politics,” the idea that some identities are less valuable than others is foundational to the history of the United States. It means that cisgender, heterosexual white people have been a historically privileged class, while for others inclusion and equality remain little more than words in the dictionary. It also means that anything outside of these identities is ascribed negative political meaning; in games it means that anything outside the default that interferes with mindless consumption is “ruining video games.” It means that gamers go after the (often marginalized) people making and writing about games under the guise of upholding “ethics” in the industry, or use violent tactics like doxxing, swatting, or hacking to ensure their message is heard.

Of course, Gamergaters and the like aren’t the biggest demographic in games, but they’re vocal and staunch in their oppositions. And so this becomes the second of two sides, the side that game companies are acknowledging and granting quarter in their neutrality. There are plenty of games with political messages. There are plenty more that borrow political messaging from the cultures that made them but offer a conservative worldview as a middle ground between extremist right and left-wing politics to placate the biggest possible audience. It’s not that games aren’t political. All games are political. Some just disguise what they’re really saying under the veneer of apoliticism.