I am a very picky gamer. Last summer, when I purchased that giant, amazing game bundle for racial justice and equality on itch.io, I figured it’d be easy to take some time, scroll through and pick out a few things that worked with my interests. I’m usually only interested in dating sims and visual novels, the weirder and queerer the better. However, perusing through the 1,741 items in the bundle quickly became intimidating. Several months later I’ve only played a handful of games, and I get a bit tuckered out just scrolling through the giant list.

In sifting through the thousands of options, I quickly realized that I felt drawn to a few games that fit my specific niche. If I am using my downtime to play a game, I want something that can be completely finished—by which I mean I can explore pretty much all the story paths, if there are multiple—in a short amount of time. While I am happy to sit and watch someone else play a game, I will play myself if the mechanics are simple and the focus is on story and character development. If my niche is also your niche, I can point you to a few gems buried in this giant bundle, whether you’ve got ten minutes, thirty or even a whole hour to spare.

Serre, described on its itch.io page as “a visual novel about a girl and an alien drinking tea and falling in love,” is like a delicious snack—it’s fairly small but very satisfying. The game’s protagonists are Arlette, a human, and Oaxa, an alien. Arlette lives alone, meeting Oaxa when the alien crashes her spaceship into her greenhouse. Oaxa promptly declares her intention to take over Earth, causing Arlette to try and chat her up as she looks for ways to save her planet. As they sip tea, the pair begin to open up to each other about their passions and their traumas, and, of course, grow fond of each other. 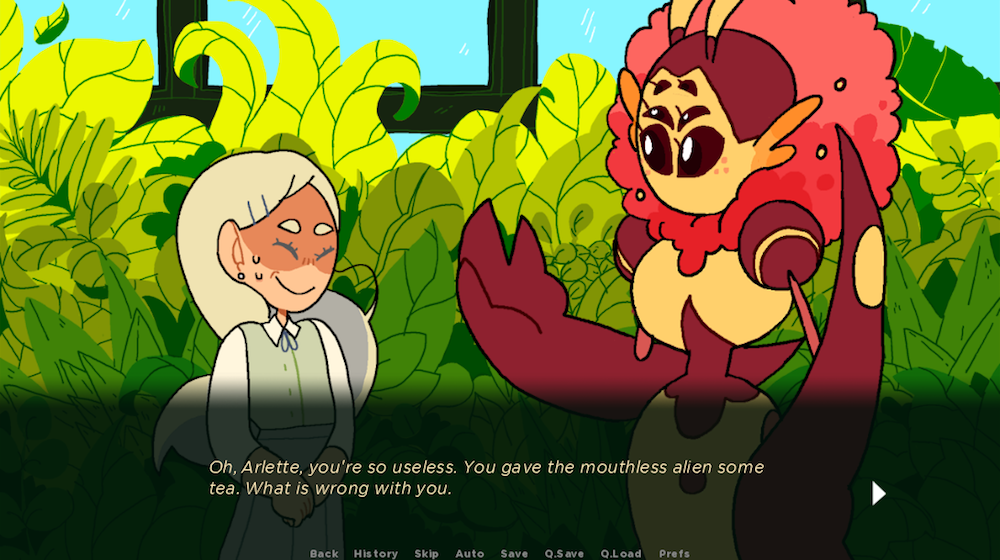 While Oaxa’s initial declaration is fairly threatening, the possibility of alien invasion is mostly a backdrop. The characters themselves drive the game as they slowly reveal their own flaws. Arlette has a mean streak, which developed after years of bullying and being ostracized, and she has to work to tame her crueler impulses. Oaxa is a total ding dong with an abusive mom who is all too eager to run from her problems. At heart, they’re both sweet, complicated people—er, person and alien—managing some heavy stressors. Despite the short length of the game, their ending feels very earned, and both grow a great deal over the course of the story.

The game is accompanied by an adorable artbook, which highlights Serre’s super cute visuals. It’s a candy pink love story set in a lush greenhouse, and the warm colors and simple setting place these characters in safe isolation with each other. In 10-15 minutes, you can watch them work through their problems and, of course, fall in love.

If you’re in need of a longer break—at least half an hour—and you’re interested in queer dating stories among just the human race, Dungeons & Lesbians has you covered. This cute, short dating sim opens in the middle of a D&D game. You are a lesbian with either she/her or they/them pronouns, and, in game-game, you play a bard. Lena, your GM, hosts the game at her house, and you play with two other friends—Rafie, a tall, leggy paladin, and Gwen, a short, ferocious hunter. Lena’s strange brother Jimothy is also there, pretty much always. During breaks in your game session you choose which friend to grow closer to, and perhaps… fall for?! 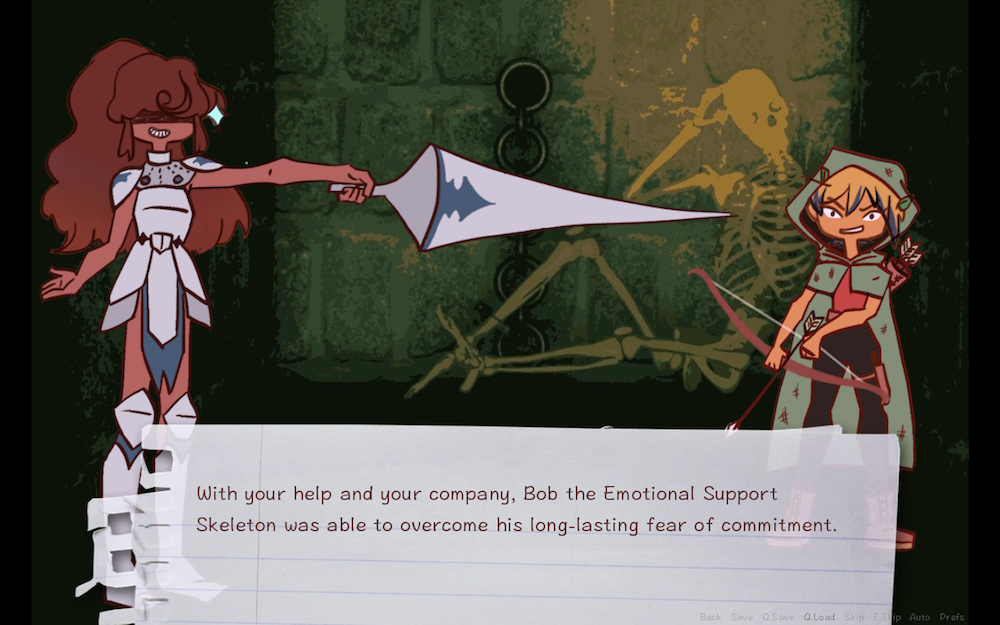 There is a love for tabletop built into this game, but the main focus is on the relationships. Character introductions happen pretty quickly; we learn through some brief descriptions that Rafie is sweet but a bit mysterious and quirky, Lena is cool and a bit intimidating, and Gwen is feisty but secretly a softy… for cryptids. If you’ve got a specific type you’re into, you can make your choice quickly.

While Dungeons & Lesbians is very upfront about each romanceable character’s “type,” their stories are genuine and sweet. Personalities often clash, as can happen in tabletop RPGs, but those tensions and their resolutions all lead to character growth or deepening relationships. This is clearly a game about how trust is built at the table, and how stressful moments in tabletop gaming can become a foundation for strong relationships—platonic and romantic.

Like Serre, Dungeons & Lesbians has a very cozy setting. The backgrounds feel like washed-out photographs with limited detail, and the loose sense that the characters are in a sunny kitchen or a living room allows the player to fill in mental details from kitchens and living rooms where we’ve played games with our friends. It makes the game feel familiar and comfortable. If you miss playing games in-person or just want to go on some silly, sweet dates, Dungeons & Lesbians is a great choice.

If you’re still in the mode for a cozy game but need a longer break, Wide Ocean Big Jacket is a good fit. The game follows two tweens and two adults who are on a short camping trip. Brad and his wife Cloanne are seasoned campers, but Mord, Brad’s niece, and Ben, Mord’s first ever boyfriend, have never been camping. The characters don’t have a strong goal beyond “have a fun weekend.” This is a vacation, a time to be idle, reflect, and relax. 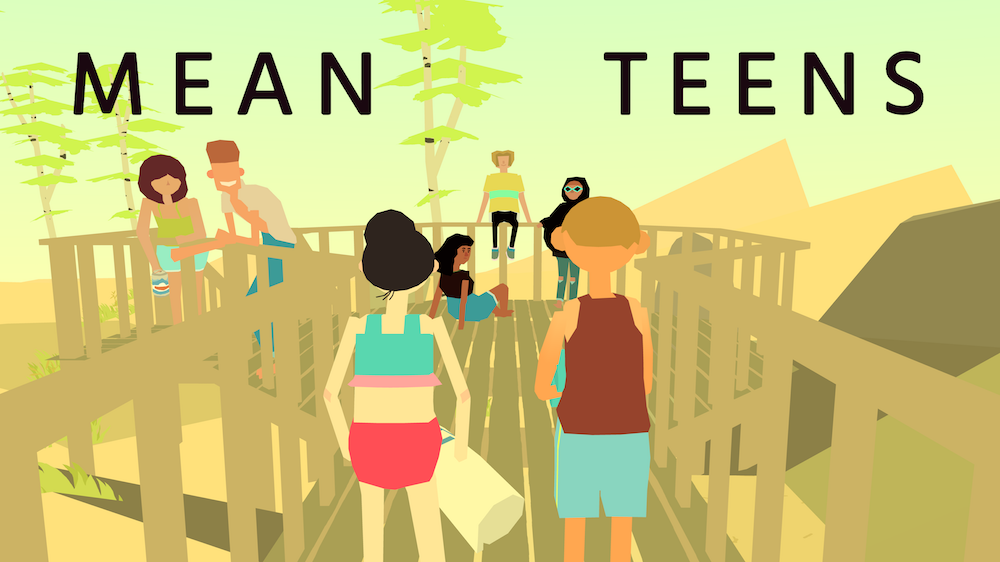 Being out in the wilderness—so to speak, the campsite depicted in the game is quite comfy—can provide a different context allowing campers to face up to personal questions they might otherwise avoid. For Mord and Ben, there are questions to be answered about what being in a relationship even means. For Brad, there is the question of what it means to be a responsible uncle, but also of whether being an uncle is kindling an interest in being a parent. For Cloanne, who does not want to be a parent, there is the question of how Brad’s potential changing interests could affect their life.

As players, we’re passive observers. Our control of the characters is limited. Depending which way the camera turns, Mord or Ben might speak first, but they have the same conversation regardless. Hiking or walking to the beach takes time, as it would in real life, and prompts discussions and interactions with strangers, but those discussions and interactions are set. While some of these interactions are stressful, the lack of control the player has is quite relaxing. We will learn the lessons we will learn. Life will happen. It’s a vacation, and it’s OK to take our time.

The character designs of Wide Ocean Big Jacket are cute and blocky, and have a sweet, modern feel. Brad is a tight-t-shirts-and-jeans kind of guy, whereas Cloanne wears high-waisted pants and a shirt with a kind of retro feel. They immediately feel like a cool, laid-back couple. Mord and Ben have simple t-shirts or tank tops and shorts—standard kid-on-vacation fare—but they run into some Mean Teens who have their own unique styles, including that one kid who clearly wears a hoodie no matter how hot it is. The backgrounds and vegetation aren’t highly detailed, but the color palettes are very warm and emphasize time of day through lighting, communicating how time is passing at a sweet, lazy pace. Visually, it’s a beautifully constructed game, and a huge amount of personality is communicated through seemingly simple designs.

While these games are very different from each other, all three are charming and easy to play. They have simple controls, focus on story and character growth and relationships, and don’t take more than an hour and a half to play at most—perfect for taking a break.