The Domestic Masculinity of Helltaker 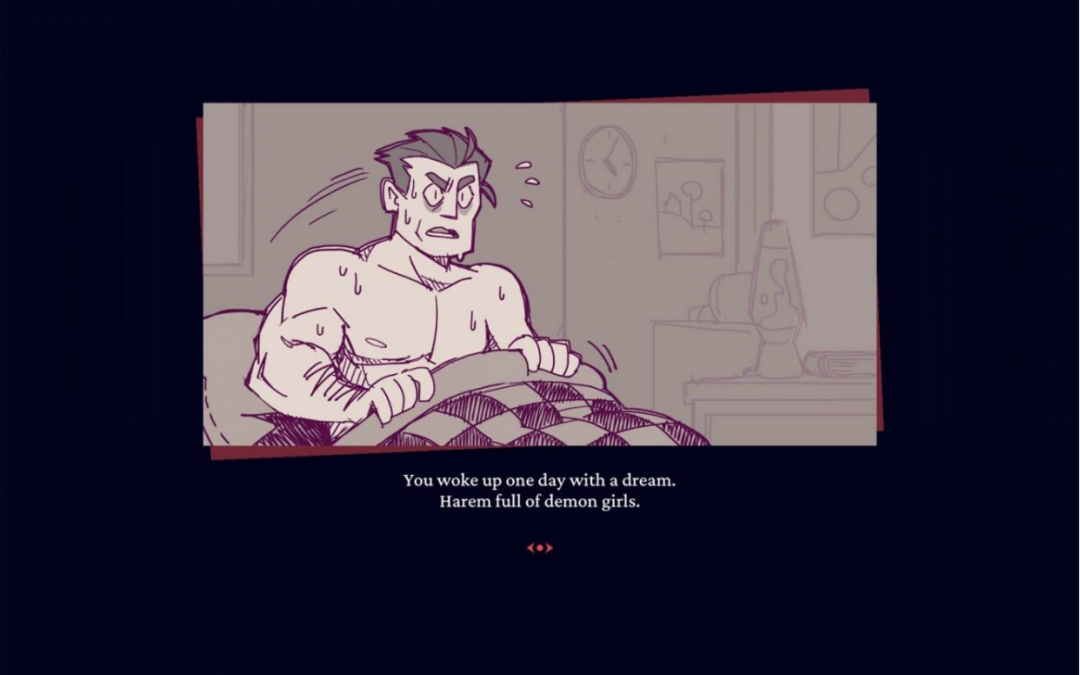 Helltaker, ostensibly little more than a very short sokoban game with some token visual novel elements, managed to explode into internet popularity in mid-2020, leading to enormous outpouring of praise, fanart, and discussion. The game—a story of a man who one morning decides to descend into Hell in order to acquire a “harem of demon girls”—has charm and wit to spare. The demon girls—the main stars of this show—have strong visual design and clear personalities making them fun to interact with, while the writing brutally and hilariously skewers cliches around harem-collecting stories. There is no seduction in this narrative (at least not directly), no swooning women awkwardly falling for the hero’s charm. “Demon harem? You poor fool…” one of the first encountered demon girls exclaims upon being invited. “They will rip you to shreds, and I have to see that!”

In fact, there is something distinctly masochistic in how the main character—the eponymous Helltaker—goes about assembling his “harem.” He weathers their sharp tongues and sharper claws, gleefully embracing their strangeness, seemingly overjoyed to just stay in their presence. The life he leads after inviting all the demon girls at his home is called out as “short and full of suffering,” which is immediately followed by claiming that since life is filled with pain, you may as well have some fun in it. As such, there is no trace of any narrative of taming, of making the demon girls adjust their behaviour. Asked—by Lucifer herself, here an overworked demon boss in a stylish suit—if he thinks he can enslave demons to his will, he instead offers “coffee, turn-based strategies, and chocolate pancakes.”

Yet, although Helltaker doesn’t really carry himself like a traditional woman-conquering hero, even though he seems more interested in serving his “harem” chocolate pancakes than extracting sexual favours out of it, his masculinity is never presented as uncertain or weak. In fact, he all but oozes rugged, manly charm.

At a glance, his masculinity has very little to do with the sort that fills so many video game stories (and subsequent discussions about those stories). Even though he has the standard, exaggerated physique of a musclebound giant with a lantern jaw casually pushing enormous rocks on his quest to find demon girls to live with, there is no violent streak to him. No surly attitude accented with “badass” one-liners, no tragic past to explain his emotional constipation. In fact, he is earnest and open about his admiration for others. Even when he gets physical—and he does get physical a lot, crashing undead minions into walls and shoving enormous boulders out of his way—there is no meanness to it, no violence. Although the entire game crackles with not-so-subtle erotic charge, Helltaker’s sexual prowess is never really put under any sort of spotlight. Significantly, the story does not end in a bedroom, but in a kitchen, from which he emerges to serve his new household a huge stack of chocolate pancakes.

What is interesting about Helltaker as a character is, then, how he manages to embody a model of masculinity so clearly distinct from the innumerable swarm of tough guys populating game covers and stories, while also remaining so distinctly “manly.” Instead of a thick-skulled brute or an aloof warrior, he is the model playboy. 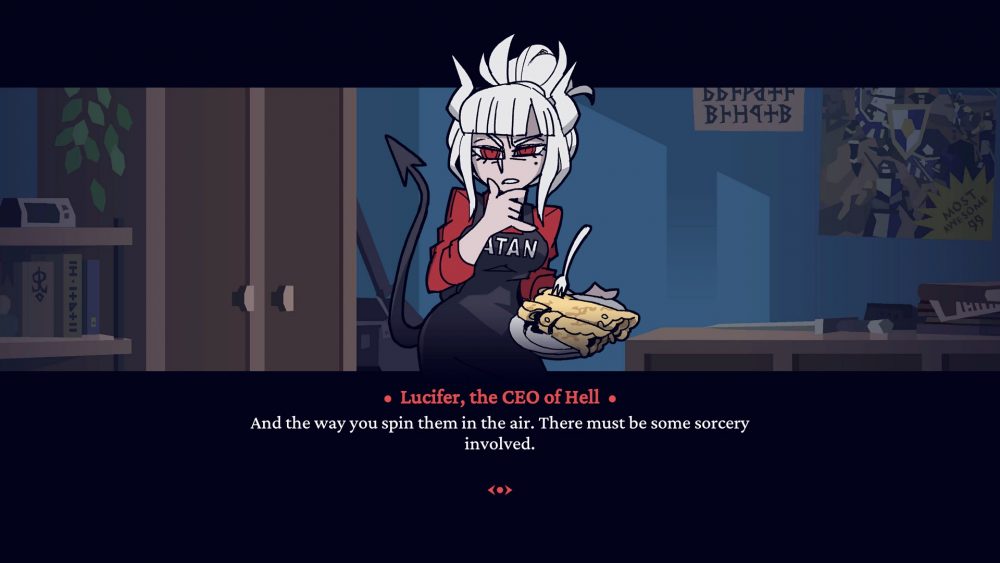 Helltaker doesn’t seduce, not directly. But it is clear that the demon girls he follows are fascinated by him, and the chocolate pancakes he serves—sunglasses still on—are a token of this fascination. Instead of having his masculinity framed in terms of overpowering strength and capacity for violence—the old ideal of a man as a warrior—Helltaker represents a far more modern ideal of masculinity. While he retains the aspects of power—as seen in his boundless, masochistic endurance and unfailing dedication to making life fun—they are framed not through his ability to impose his will on others by force, but rather in an almost unlimited ability to please and satisfy.

The erotic undertone of Helltaker is so clear because while the game shies away from openly sexual content, it is clearly about sex—about a man who so bristles with potency that he can easily fulfill and satisfy an entire harem of demon girls. That this satisfaction is not represented as sex is not at all important: the kitchen or the bedroom become mostly interchangeable as tokens of masculine energy. A playboy doesn’t have to be a sleazy creep—a playboy just has to be a man who wants to turn his life into a sphere of play, and who knows how to make that happen, and how to make it impressive.

At the same time, he remains a muscle-bound hulk who wouldn’t look that much out of place in the greater pantheon of video gaming’s macho men. This, in turn, sets him apart from the other cultural incarnations of the playboy—the comedic, exaggeratedly promiscuous but also slightly ridiculous and unmanly Austin Powers type, or the exotic, more or less openly bisexual rogue like Dragon Age’s elf assassin Zervan, or even from the suave, virile but also often manipulative and unfaithful Bond types. Compared to those, Helltaker remains uncompromisingly butch, with not the slightest hint of effeminacy or fragility in his boundless virility. Comedic as he is, he also stands for something aspirational.

All that is not to say that Helltaker is secretly problematic; I am not writing this to expose some kind of secret issue with the game. It is charming and well-written, and compared to the astoundingly awful level set by so many other games about getting a “harem,” it may just as well be sublime. But part of it—part of its freshness—comes from the fact that it taps into an ideal of masculinity that just does not come up in video games all that often.

After all, video games about the domestic (no matter how popular they are, and sometimes because of their popularity) are often framed as childish, girlish, not gamer’s games. The Sims series is a strong example here, but hardly the only one—the perennial best-seller Minecraft gets lumped in with these kinds of games. What Helltaker does, as a game, is offer a framing of serving your house-guests a pile of pancakes that is indisputably manly: they are not guests, they are a harem. They are not just girls, they are mean demons. You are not a sweet housewife, you are the toughest Hell-taking playboy out there.

But for all potential issues with the playboy figure—one that yields itself easily to critique—there is still something special in this. That the vision of masculinity presented in Helltaker feels so fresh and different is, most of all, a condemnation of how generally narrow the vision of it tends to be in video games as a whole.

Jay Szpilka is a PhD candidate who writes about the politics of sexuality and gender, punk cultures and video games.