In the beginnings of Blaseball, the community was fragmented. Bits of lore, worldbuilding, and statistical analysis popped up all over the internet, and while there was a small amount of reporting being done, the vast majority of people being brought into the fold came from word-of-mouth through outlets like Discord and Twitter. And as each week passed and new fans were being introduced, the game itself moved at lightning speed, with canon characters and events being lost to the sands of time. There needed to be a place where people could gather, new fans could get information, and content creators could place their art for public consumption. And thus, the Blaseball wiki was born. I sat down with Steven Carver and Kyle Shockey, two of the current wiki admins, to discuss the site and the undertaking of running a community hub.

If you don’t follow Blaseball, or if you’re a Blaseball fan but you interact with it in one of the fifty million other ways that have popped up as the game gains popularity, here’s a little bit about how the wiki works. The wiki is divided into “in-universe” and “out of universe” pages: in-universe stuff is written within the Blaseball canon and talks about the game as if it were occurring within the same world as the author of the document. Pages about the game itself, the teams, and the players are all written in the in-universe style. Out-of-universe pages break this fourth wall and discuss Blaseball as a simulation video game, such as the “Beginner’s Guide to Blaseball” page. The wiki is part historical record and archive, since it contains a complete accounting of every season of the game and every player, past and present, and part fanfiction hosting service, since, as with all wikis, it is open-access for fans to edit and create new pages. Aside from a few things later officially endorsed or confirmed by the devs, all the lore about the players, and in fact, everything that isn’t visible on blaseball.com, is fan-created. 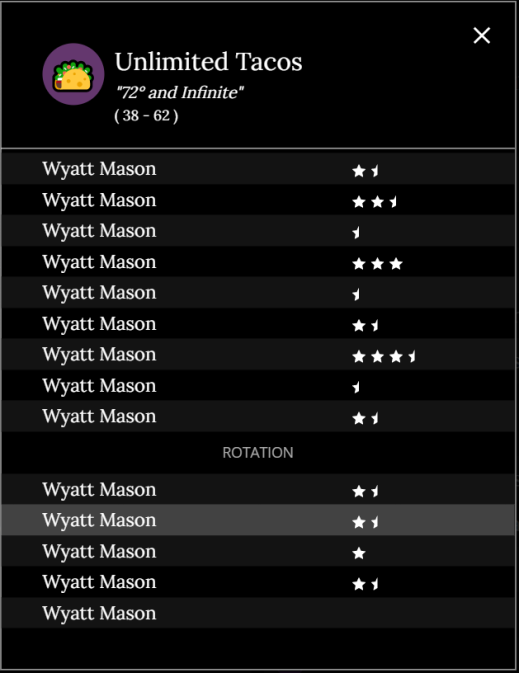 The Blaseball wiki helps immortalize important events, such as the Wyatt Masoning, as well as hosting fan-created content.

The wiki had a humble start: Carver began by investing himself in the Discord (that at the time was much smaller than the monstrosity it is today) and quickly became fascinated by the “horrific insinuation” of the beginnings of Blaseball. The insidious undertones of the game, as well as fan response, intrigued Carver, who says that “the fringes of the imagination” fascinated him, and that he felt strongly that someone should provide a space for these stories to live forever. And so in Season Two he, along with another contributor who has since moved on from the project, founded the wiki to capture the sensation of the unknown that he so enjoyed. Shockey joined shortly after, drawn in by the fact that a lot of what we know as Blaseball is the product of bugs turned features. To Shockey, the fan interpretations of these data errors (like the Wyatt Masoning, where a coding error turned every player on the Unlimited Tacos into their worst hitter, Wyatt Mason) that turned into the canon of the game were compelling.

While the wiki is home to a plethora of lore and fan creations, its goal is actually very simple: “[We] wanted to make a simple but factually correct historical record of the game,” says Carver. Shockey, who is a librarian “in real life,” says his archival experience gave him a good sense of what was important to record. Both admins specifically reference that their goal, while curatorial, is very much fan-oriented, since they are attempting to answer questions that new fans and players are asking. As Carver puts it, “People are like ‘what are you doing? What does this mean?’ and answering that question was important.”

In the early days, the wiki team also had the specific goal of fostering and contributing to the active fan culture and fanfiction collection that has arisen in response to Blaseball. But as the game has gone on, the wiki team has become more interested in historical representation. “As the months have gone on, my interest has moved more towards strictly maintaining that historical record, and letting the fanfiction find its own way,” says Carver.

Carver cites the worldbuilding of the Yellowstone Magic (and check out Bluesky National Park to see what he’s talking about) as “one of the most delightful things” on the wiki. Similarly, Shockey points to the ways in which the fandom has pushed the boundaries of what fan work can look like, being particularly delighted by things like fanfiction legal documents submitted as part of somewhat-in-universe legal trials, which the wiki has also participated in.

But as with all fandom, the great creative outpouring and sense of community present for Blaseball is not without its issues. Each team in the game has its own community, as is true of fanbases for professional sports teams, and with each microcosm of Blaseball comes a unique perspective on lore, worldbuilding, and character interpretation. With differences in opinion on how fandom should operate, as anyone who’s ever treaded on Tumblr can attest, comes conflict. And so, as Shockey puts it, “[the role of wiki admins] has kind of evolved into unofficial community management.” Instead of being purely about curatorial endeavors, the wiki also requires the mediation of disputes within the fandom over things like worldbuilding, characterization, and shipping. This role is necessary: putting the moral character of an entire fandom on the shoulders of a few wiki mods is an impossible and unfair ask, but as long as there’s an artifact that the fandom has access to alter, conflict will sometimes arise. To help alleviate this, the wiki team has altered to allow for things like lore proposals in on-site forums so that discourse can happen between all fandom segments, as opposed to being decided by a group of people on Discord and then brought forward as canon to be disputed by fans who weren’t on that particular server.

That’s part of the reason why the wiki has moved from being hosted on Fandom, a network hosting a plethora of wikis on various subjects, to being self-hosted alongside the Society for Internet Blaseball Research. Moving some 500,000+ words of fan-created lore from one site to another was a huge endeavor, but the desire to have more access to conversations going on between fans about the lore of the game actually helped spur the decision. This was done in part to ensure that Carver and Shockey, as well as other admins and mods, have access to the conversations going on within the fandom, but also so that the Blaseball wiki can get out from under the technical limitations of a prebuilt web platform, and potentially host even the weirdest and most out-there fan creations.

Across my hour-long discussion with Shockey and Carver, the thing that kept coming across to me was how much of a labor of love the wiki is. The admins have facilitated the creation of a staggering piece of fan curation, with almost fifteen hundred active pages filled with historically accurate information and lore expansion for a game that everyone originally thought was a baseball clicker but that has morphed into a surrealist horror-flavored indie game culture icon. It’s an absolute ton of work, but they do it because they saw a need in the community and they loved the game. Without people like Shockey and Carver, Blaseball as we know it today would look very different. And because of their work and the records they have generated, Blaseball will live on long after the actual game, as an artifact not just of 2020 and the COVID-19 pandemic, but as a testament to the weird and wonderful shit people can get up to when they love something. And that’s pretty darn great, if you ask me.