Except one thing: The Sandwich of Desperation.

This is the sandwich you scarf down in five minutes or less amid a pile of cardboard boxes, in your Honda Civic in a Starbucks parking lot, on a bench in the park down the block from your co-working space. You eat it between customers, before you pick up the kid you nanny from school, when the office gets too loud, after an early morning shift in the university dining hall.

I truly believe The Sandwich is universal, if not in taste, then in concept. Sandwiches are the ultimate busy-people food. They’re easy to make or can be purchased nearly anywhere. They travel well, can contain a range of ingredients, and, crucially, most sandwiches are better than no sandwich at all.

I consider sandwiches one of my favorite foods, because when done well they can be life changing, but the Honda-Civic-park-bench-back-of-cafeteria sandwich is not that. It is pure fuel, and in Going Under, it is called a Jobwich.

Going Under is a satirical rogue-lite game in which players are tasked with clearing out the basement of a co-working space, where startups lived, died, and turned into monster-filled dungeons. The first of these offices is Joblin, a freelance handygoblin-style company comparable to TaskRaebbit, and therein lies the Jobwich.

The Jobwich is more or less the platonic ideal of a sub sandwich. They’re the cheapest yet most overpriced healing item in terms of value, filling only half a heart container. It is the very definition of a Sandwich of Desperation. You’ll eat it, and it’ll get the job done, but it’s not going to be memorable or even necessarily pleasurable.

I have eaten this sandwich before, but because my company has been remote since March, it has been a while. During this period, my fiancé and I have also redoubled our efforts in the kitchen. We cook most nights and, on the weekends, experiment with increasingly complicated dishes: homemade pasta with hand-ground pesto, potato and caramelized onion galette, taro custard-filled cream puffs.

Conceptually, the Jobwich was irresistible for its simplicity, which is why I have made a Jobwich, and why you, too, may enjoy a Jobwich in a few simple steps.

How to Make a Jobwich

Slice the steak roll in half lengthwise, but don’t quite cut through—leave a hinge on one long side. Set aside.

Slice the tomato into ¼-inch thick rounds. You will probably only need three or four slices, depending on the size of your tomato. Set aside.

Assemble your Jobwich: Layer turkey and cheese on the bottom half of the steak roll. Top with tomato slices and lettuce, then spread a thin layer of mayonnaise on the underside of the top half of the roll. Close sandwich and slice in half; wrap one half in foil and refrigerate for tomorrow’s lunch. 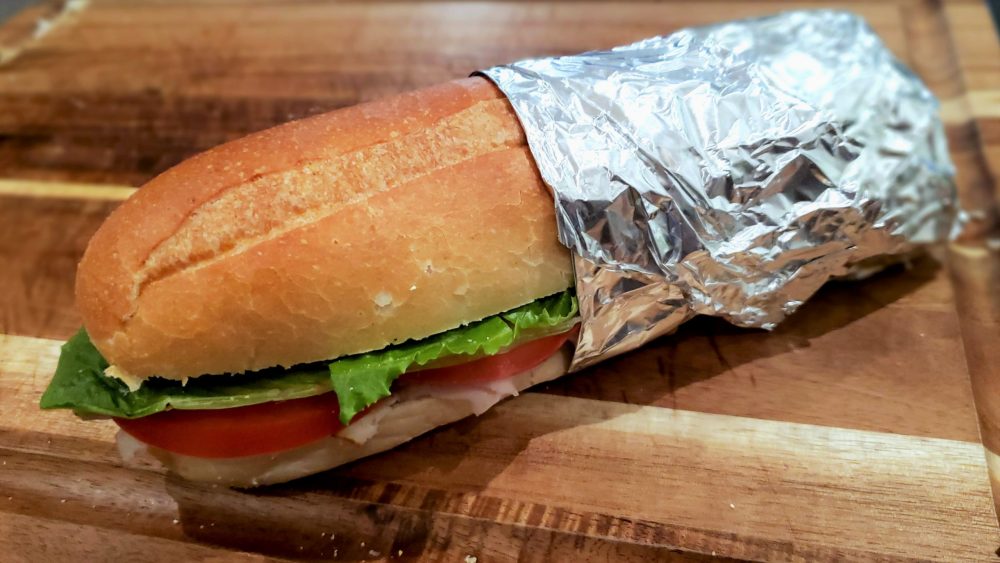 The author’s version of a Jobwich looked good while offering the mild disappointment you’d expect from a Sandwich of Desperation.

I did take some liberties with AggroCrab Studio’s depiction of the Jobwich. The in-game Jobwich only clearly shows what I assume to be lettuce and tomato, but meat, cheese, and little mayonnaise packets are fairly standard deli fare, and so I decided to include them.

For meat, I chose turkey because it’s both economical and dry, and when I thought about what makes a sandwich feel truly desperate, it’s usually that it’s rather dry and lacking in flavor. (This is also why it’s important to pat your meat dry!) Similarly, the tomato I purchased was simply labeled “regular tomato” at the grocery store, and it tasted like an average, if somewhat flavorless, tomato. Finally, I thought the mayo an important addition. While you probably won’t be able to taste such a small amount of mayonnaise spread over such a large surface area, it is crucial to keeping a too-dry steak roll from becoming a choking hazard.

All in all, this was certainly a sandwich. My Jobwich never really became more than the sum of its parts, but it tasted fine and even improved slightly after it sat in the refrigerator overnight. It was a perfectly adequate sandwich that, had I not made it knowing I would write about it, would not have been memorable in the slightest. In short, it was the basest sustenance.

But sometimes that half heart container is all you need to keep going, you know?