Review: Life is Strange: Partners in Time #1 is Gay, Colorful, and Sincere 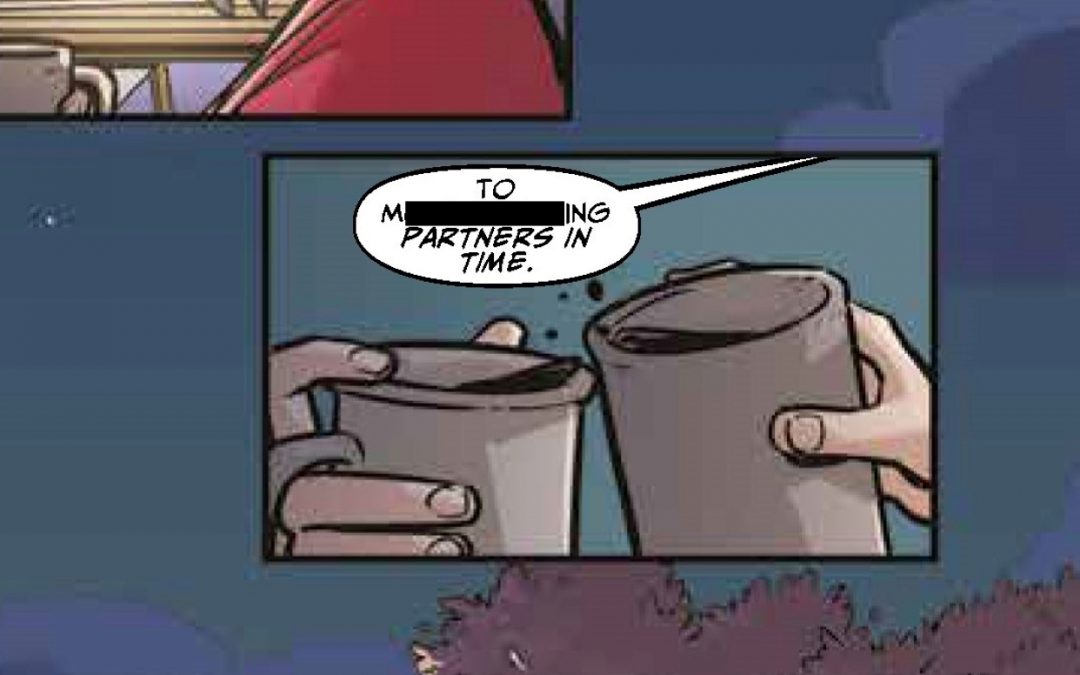 When Life is Strange ended with issue 12, one of the biggest things I was going to miss was the cast of supporting characters the series had assembled but never fully utilized. Life is Strange: Partners in Time #1 has put some of those fears to rest, but conjured some new ones with a double serving of those same supporting characters. Partners in Time follows Max Caulfield, Chloe Price, and Rachel Amber on their road trip across America with the High Seas—the indie pirate-themed band Chloe has done some graphic design for—and, unintentionally, Rachel’s Hamlet castmates. At the same time, over in the original timeline Max left in Dust, Partners in Time follows Chloe and Tristan (the ghost boy introduced in Waves, the second arc of Life is Strange’s first comic series) as they also follow the High Seas on the very same trip across America.

Life is Strange: Partners in Time #1

Sidequest was provided with a review copy of Life is Strange: Partners in Time #1 in exchange for a fair and honest review.

Interdimensional storytelling isn’t necessarily a bad thing, nor new for the franchise—Life is Strange has dealt with the different timelines spawned by Max’s powers ever since the very first episode, and the comics have largely been about Max’s search for her proper timeline. Up until now, the story has largely concerned itself with one dimension at a time, brushing up against the others when Max strains her powers but otherwise dealing with one thing at a time. That’s done for now, however, as this issue gives equal time to the Santa Monica timeline we followed Max into in Waves and Strings, and the Bae>Bay timeline (also known as the Objectively Correct Timeline, I will not be taking questions) we left Chloe behind in after Dust.

This turn isn’t especially surprising, either. LiS #12 ended with Tristan accidentally crossing into the Baeverse and everyone gearing up for their respective mirrored road trips. In that sense, this is a follow-through on that promise. There’s a lot to love in the way Emma Vieceli handles the split narrative, and if you enjoy Claudia Leonardi’s landscapes as much as I do, this issue has a lot to offer. The half-page spreads of Arizona’s beautiful scenery conjure the moments of quiet from the original games, offering the players and characters both a chance to reflect, enjoy the sights, and just listen to the soundtrack. The only thing missing is some Syd Matters or Daughter, but the soft color Andrea Izzo continues to use goes a long way to making up for that lack. 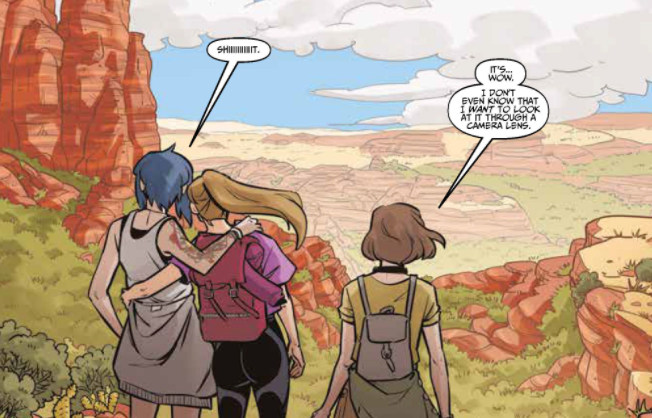 The two timelines offer some interesting opportunities in telling Max’s story (and make no mistake—this is still Max’s story). There’s a world where Max exists, but shouldn’t (the Santa Monica-verse), and a world where Max doesn’t exist, but should (the Baeverse). Her presence—or lack of one—has an impact on the people in both, and Vieceli takes the chance to show us how almost immediately. After a moment of reflection on the nature of memory and experience, Max, Chloe, and Rachel run into her Hamlet castmates on the same hiking trail, and it’s only Max’s ability to rewind time that prevents Lawrence—playing Laertes—from falling and injuring himself in a tragic selfie accident. This is said with certainty, because in the Baeverse—where Max is absent—Chloe and the High Seas run across the very same actor, injured and awaiting rescue. This seems like a pretty minor accident—Lawrence is in pretty good spirits despite being all alone with a possibly broken leg—but the most iconic image in Life is Strange is a butterfly flapping its wings. There’s no telling which action is going to ripple out to create the next metaphorical (or literal) hurricane, and with the reveal that Victoria Chase is playing Ophelia (the very same role Rachel has in the Santa Monica-verse) there’s sure to be some rippling here.

The dual timeline approach does give me some concern, though. Life is Strange comics have always been a slow burn, and I’m a little worried that with this effectively doubled cast size, things are going to take a long, long time to come to fruition. As it is, I’m starting to feel like I’m repeating myself when I say that an issue has been doing a lot of table-setting. So far I’ve been pretty pleased with how that setup has paid off, but with so many characters being introduced and reintroduced, it might be a challenge to make these supporting characters—who I love!—full actors in their own right. As it is, the only reason I know Lawrence’s name is because he fell off a cliff, and I had to go back to check a few times to make sure that was him. I definitely don’t know who the other Hamlet actors are, and I’ve only barely got a handle on everyone in the High Seas—who I’ve loved since their first appearance in LiS #1.

If you’re thinking I haven’t made much mention of Tristan, who featured so heavily in every issue set in the Santa Monica-verse, that’s because he’s not really in this issue. After appearing in front of Baeverse Chloe in LiS #12, I guess he just passed out. I say “I guess” because he doesn’t actually show up until the end of this issue when he wakes up in Chloe’s hotel room in Arizona, which is very far from the coastal café he appeared in. Chloe’s pretty lucky that Tristan was linked to Max, in a way, otherwise it kind of looks like she kidnapped a random guy who popped into existence and dragged him with her to follow a touring rock band. I’m sure he’s going to have a bigger role going forward, but who’s going to get pushed to the background to make room for him?

None of that is to say that the two timelines were handled badly at all. The casual queer heart at the center of the first 12 issues hasn’t gone anywhere, with Chloe and Max getting to indulge in the kind of sapphic yearning usually reserved for high society women in period dramas. I get to have my cake and eat it too, though, because we’re also treated to a veritable feast of small moments between Santa Monica-verse Rachel and Chloe. Neither of these relationships are treated as lesser than the other, either. There’s no looming sense that because Baeverse Chloe loves Max, Santa Monica-verse Chloe and Rachel are doomed. Instead, all of these relationships are presented to us as straightforward partnerships. Rachel and Chloe love each other. Max and Chloe love each other. There’s no contradiction in the two statements; there’s no fated romance or messy love triangle. There’s plenty of room in the universe—and the narrative—for both of their stories, and thank heavens for it because every version of Chloe Price really does deserve all the happiness she can get.

I’ve thoroughly enjoyed every Life is Strange game and comic so far, and I expect to enjoy Partners in Time, as well, despite these concerns. This creative team has set themselves a lot of spinning plates with the double serving of supporting cast, and I hope—and expect—it will pay off. Regardless, this creative team honed in on the things I loved most about the games, and expanded on everything I wanted more of. Life is Strange: Partners in Time is gay, colorful, and sincere. As long as those things remain true, I’m going to be satisfied.