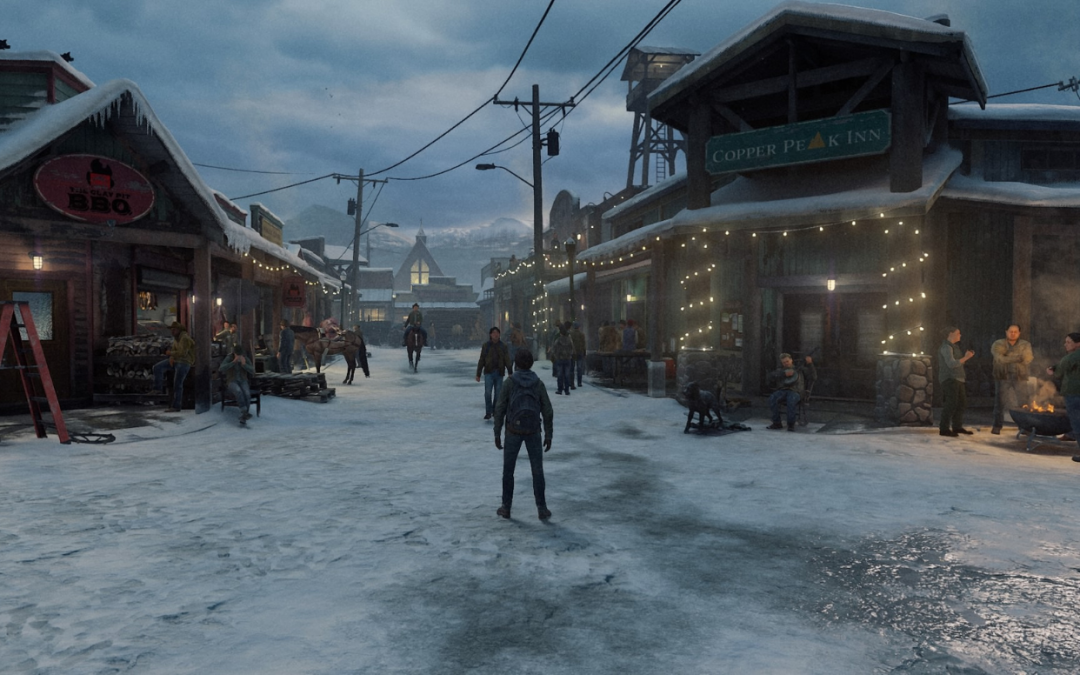 Joel’s outlook on life in The Last of Us is simple: kill them before they kill you. Let the people you love motivate you to survive. Even after his death in Part II, this is a philosophy the player confronts over and over again, and one that gives the game a distinctly conservative cast.

This conservatism begins with Joel. He is, first and foremost, a survivor. He does heinous things to protect himself and the people he cares about, and in many ways, Joel is a doomsday prepper fantasy realized. By design, he’s “meant to evoke rural Americana, a nod to cherished American values of self-reliance and ingenuity in the face of hardship and deprivation.” [1] This isn’t to say he’s not a well-written character or that he’s impossible to connect with; I think it’s fair to say The Last of Us was so successful partly because something about watching a grizzled dude learn how to love again appeals to a wide audience.

With a glowing critical reception of the first game’s story, beloved spinoff stories, an upcoming HBO adaptation, and seven years of development behind it, The Last of Us Part II was too big to fail. And it hasn’t failed, by any metric: by August 2020, less than two months after its release, The Last of Us Part II had already become the third highest-grossing game in PlayStation history. The game drew wide praise (and some criticism from a certain vocal subset of fans) for its story and depiction of queer female characters. Though it’s still groundbreaking for AAA games to feature queer protagonists, The Last of Us Part II‘s conservative politics undercut the impact of its more “progressive” decisions.

Part II focuses on Ellie’s story—namely, her quest for revenge after Joel is murdered. In doing so, it makes Joel the most important person in both games, to the extent that Ellie, despite her contentious and complex relationship with him, sacrifices everything to pursue revenge. Joel is still a main character at the expense of the game’s actual lead character. By continuing to center Joel, The Last of Us Part II relegates the player to Joel’s limited worldview and erases others who were important to Ellie.

The most egregious example of this is Ellie’s friend Riley, who is mentioned in The Last of Us but fleshed out in the game’s DLC, “Left Behind.” Ellie and Riley were school friends before Riley left to join the Fireflies; the story’s premise, told through flashbacks, is that Riley returns to see Ellie and go on one last adventure together. Infected attack and bite them both, but not before they’re able to confess their feelings for one another. Riley dies. Ellie doesn’t.

The events of “Left Behind” cast new light on Ellie’s character in The Last of Us. Ellie’s foul mouth, sarcastic bent, affinity for terrible jokes, and rebellious streak all match Riley’s. Of the two, Riley was older and more fearless, telling Ellie, “There are a million ways we should’ve died before today, and a million ways we can die before tomorrow. But we fight, for every second we get to spend with each other. Whether it’s two minutes or two days, we don’t give that up. I don’t want to give that up.”

By Neil Druckmann’s admission, Riley and Joel are two sides of the same coin, the main difference being selfless versus selfish love. But by focusing on Joel, and Joel’s selfish worldview, The Last of Us Part II erases Riley’s influence and embraces a conservatism that its progressive veneer can’t offset. Between games, Riley slips out of the narrative entirely, despite the formative role she played in Ellie’s life.

In part, this is because the world at large reflects Joel’s pessimism. The Jackson settlement where he and Ellie live is an outlier compared to places like Boston, Seattle, and Santa Barbara, where violent factions wage war for control. It isn’t just nonviolent—it’s the only community in which residents aren’t military-trained and ready to mobilize at a moment’s notice.

Though some of the homes are decidedly modern, Jackson’s layout and wooden buildings evoke the quintessential Wild West towns of the 1800s. In other words, it makes real the nostalgia-fueled escapist fantasy of living in “simpler times,” when we didn’t have cell phones or running water. It feels like a pointed choice for the “good” town to glorify the past in such a way, especially because the success of American expansion has always been contingent on the genocide and exploitation of Black and Indigenous peoples.

The decision to make Jackson the peaceful settlement feels even more pointed when compared to the cities. There, violence rules all; the game becomes an uncomfortable thought exercise, bringing to life the anarchist jurisdictions conservative American lawmakers have been so concerned about of late. The groups Ellie encounters in Seattle are the Washington Liberation Front (also called the WLF or Wolves), a brutal and well-trained militia, and the Seraphites, a primitivist religious sect. After driving the government’s FEDRA agents out of Seattle, the Wolves took over the city and forced civilians to join their ranks. The notes Ellie finds speak of a violent coup and hostile leadership that civilians died by suicide to avoid. For years, they’ve been at war with the Seraphites for total control of Seattle. As Emanuel Maiberg points out in “The Not So Hidden Israeli Politics of ‘The Last of Us Part II,’” it’s not an even fight, even though the narrative treats it like both sides perpetuating an endless cycle of violence.

Notably, both groups are racially diverse, which the team made a point of including, Neil Druckmann told the BBC. But, as Cameron Kunzelman writes in “Destroyed in the Cut,” The Last of Us Part II includes these characters without recognizing their humanity. Though there are a number of prominent characters of color, nearly all of them die cruel deaths. Juxtaposing these violent factions with the peaceful and idyllic—and majority white—Jackson subtly romanticizes a very specific version of the Wild West, where the peaceful white people have to defend their territory and their loved ones from a violent Other at any cost. It’s not enough to simply include these characters. It’s not enough to give them some interiority when, in the end, their only narrative impact is to fuel the main character’s vengeful bloodlust.

During The Last of Us Part II, players also control Abby, the WLF soldier who kills Joel. Early in the game, Ellie and Abby are presented as parallel characters. Both raised in militaristic environments, both lost their fathers, and, most importantly, both want revenge. The other parallel between them is that both Abby’s and Ellie’s actions are motivated by men. Both want revenge for the deaths of their fathers, and Ellie only abandons her fight when she remembers her final conversation with Joel. Abby’s change of heart—abandoning the WLF and trying to reconnect with the Fireflies—is motivated primarily by her friend and former boyfriend, Owen, who was disillusioned with the WLF’s violent tactics. Abby’s determination to leave only solidifies after his death.

In trying to appeal to the largest possible audience, The Last of Us Part II plays it safe with a revenge story that relies heavily on its existing male characters to determine the actions of its female characters. The result is a misogynistic story that continues to center Joel after his death at the expense of character development for the game’s living lead character. Because of this, Ellie and Dina’s relationship—still a rarity in AAA games—has tender moments, but lacks the development that would make it feel like more than a secondary plotline. Even after they move into a home together, the game still evokes the pastoral fantasies that the rest of Jackson does: the rural Americana aesthetic that reminds the audience who to root for.

Still, Dina exists for Ellie to lose. When Ellie returns from her final confrontation with Abby, Dina has moved out of the farmhouse she and Ellie shared. This hardly seems to affect Ellie; rather, Dina leaving is meant to signify the depth of Ellie’s rage to the player. Look how far she’ll go to avenge Joel’s death. Look how much she’ll give up.

Ellie essentially ends the game where Joel began the first: cold, closed-off, and with nothing left to lose. This closing shot cuts off the potential for further development, because aside from a few journal entries, we don’t know anything about what Ellie is feeling at the end of the game. The Last of Us Part II wants to be a game about reckoning with the legacy of a problematic father figure and escaping a generational cycle of violence. Instead, it perpetuates the cycle by never letting Ellie develop in a meaningful or measurable way.

One less obvious aspect of The Last of Us‘s conservative politics is Naughty Dog’s own practices as a studio. Periods of crunch in the weeks or months leading up to a game’s release are all but an industry standard for AAA studios, and Naughty Dog is no exception. Despite containing some progressive elements, it’s disingenuous to call a game progressive when studios are exploiting the people making it. This is true regardless of whether employees love what they do, and these practices contribute to the widespread glorification of overwork despite their negative and even dangerous side effects.

It’s not The Last of Us‘s fault that it came out in the middle of a global pandemic, but it’s one thing to see how people act in a video game pandemic while observing the real-time reactions of actual humans. Where the people of The Last of Us divide and defend, real-life communities come together to protect and support their most vulnerable members. I believe this, if anything, highlights the lack of imagination in The Last of Us‘s post-apocalyptic society, especially since research shows that people tend to come together during times of crisis.

I think this is why The Last of Us Part II fell flat for me: it accepts people as individualistic and violence as universal and inevitable. We don’t need to know why Earth’s dwindling population is killing for resources if we acknowledge survivalists’ fear and paranoia as legitimate. Despite its progressive elements, The Last of Us‘s America repackages the conservative ideals of individualism and self-reliance to drive its narrative. The Last of Us Part II‘s story depends on the player accepting this at face value, or the war between the Wolves and Seraphites and Ellie’s desire for revenge and willingness to put her friends in harm’s way fall apart.

But I can’t accept it, and I am left wondering why Earth’s dwindling population is killing for resources instead of helping one another. Ultimately, this is not a question Naughty Dog chooses to interrogate. Perhaps this is why Naughty Dog, like Ellie, has fallen into a cycle of violence it cannot escape.