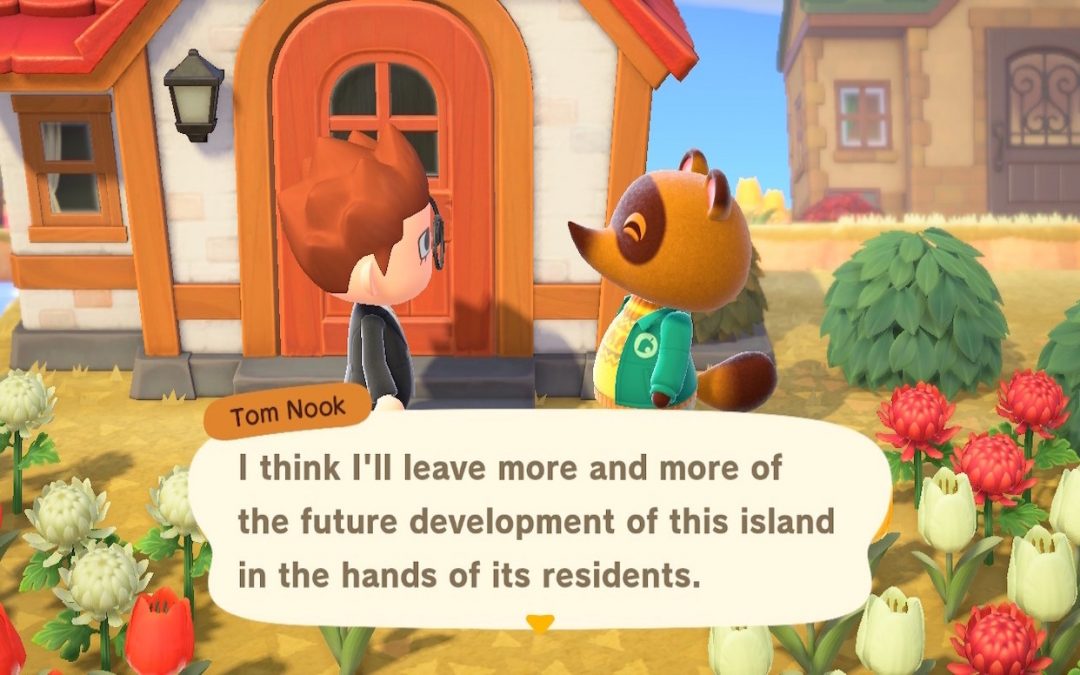 The game will tell you what you want. Then, it will tell you how to achieve it. Of course, this is exactly the premise on which most games operate. Yet the copious hours I have dedicated to Animal Crossing: New Horizons have helped me realise just how this fundamental process can reveal troubling assumptions about what the players are expected to value.

We did not have game consoles in our house when I was little, so my first games were pretty mundane. However, they did teach me a lot about what I expected to aspire to in life. The Game of Life—the classic board game—literally illustrates the steps it expects the individual American to take during their time on Earth. Even though I am Australian, the concepts translate here as well. You go to university (or not), embark on a career, maybe raise some kids, and die. There are little mishaps and fun diversions along the way. 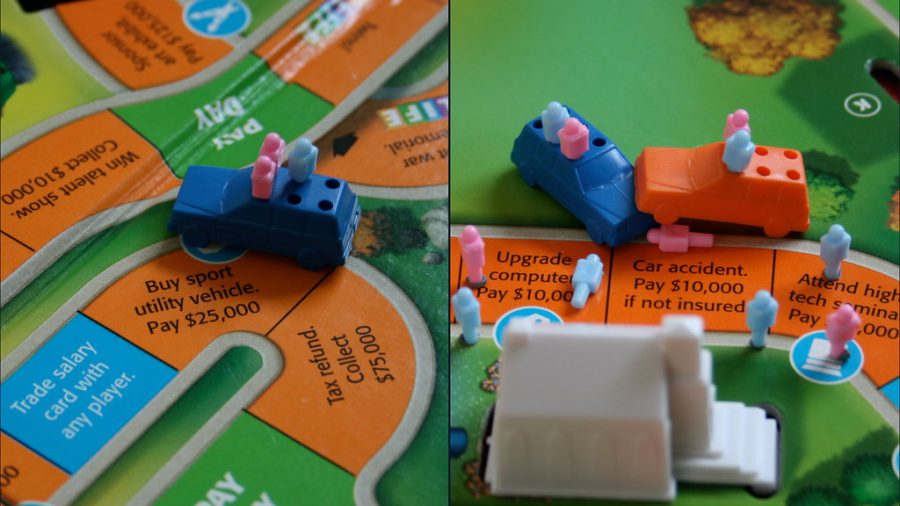 The Game of Life, sansproof, licensed under CC BY-NC-SA 2.0

When I was around nine, I began playing Millsberry, an online advergame. It was relatively obscure and only existed between 2004 and 2010. Laden with blatant product placement such as Cheerios, Cinnamon Toast Crunch, and Lucky Charms, the game was my first encounter with the “American dream.”[1] It modelled suburban utopia: cookie-cutter houses, pets, sporting centers, a friendly white-picket-fence neighborhood. Cosmopolitan capitalism, the game seemed to suggest, was not only achievable but desirable. Earn enough money and you too can enjoy the best of American culture. At the global level, it is this vision of the world that the United States and the institutions aligned with its outlook have projected onto developing countries. As we shall see soon, this way of thinking is at the heart of Animal Crossing: New Horizons. 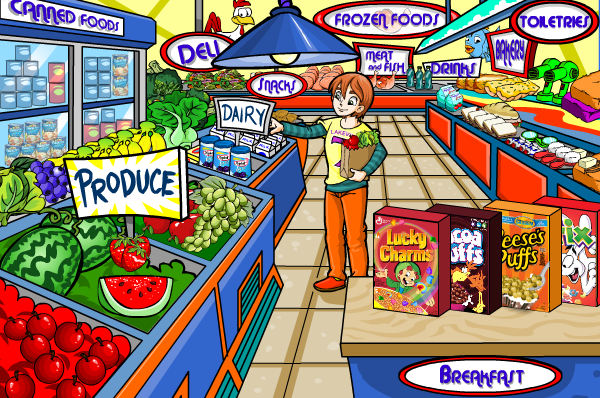 During the 1990s, the World Bank and International Monetary Fund (IMF) introduced the Washington Consensus to the developing countries of (primarily) Latin America. This involved austerity measures, privatization, and financial liberalization. The basic idea was that through the successful implementation of these economic policies, developing countries could then experience the same level of cultural, social, and economic development as the Western world. The wishes of Latin Americans themselves, including Indigenous peoples, were ignored. The policies failed abysmally and the affected countries were left with poor growth and political instability.

These institutions measured—and still measure—development through GDP, and considered more developed nations to be more successful. Moreover, this measurement of success is rooted in the belief that GDP can grow infinitely. Developing countries, therefore, should aspire to the economic growth enjoyed by nations such as the United Kingdom, France, and the United States. However, the reality is that infinite GDP growth is unsustainable. Natural resources are finite, and the assumption conveniently forgets that many Western countries achieved their economic growth through slavery and colonisation. Although alternative approaches such as the degrowth movement are gaining traction, the legacy of the Washington Consensus continues, and even seems to underpin development concepts in video games.

Animal Crossing: New Horizons’ capitalistic and colonial leanings have already been well detailed. That is to say, it is pretty clear that the game is a bit messed up, despite the benefits players have reaped from the game during this pandemic. The game, as far as plot goes, is relatively open-ended. The sole narrative is basic: the player helps establish a (colonial) settlement and develops the island to a level acceptable to Tom Nook, the CEO of Nook Inc. and chief manager of the island. When you have achieved an acceptable level of development, Tom Nook invites a celebrity musician, a dog called K.K. Slider, to host regular concerts at your island. To do this, the player must first develop the island economically—e.g. using natural resources to build up the island’s infrastructure—before then experiencing full cultural development—e.g. enjoying regular canine concerts. But what exactly is involved in attaining this “acceptable” level of development? And what does it tell us about what the game considers “good” progression?

On the one hand, the game encourages personal development. The game rewards the player for the purchasing of clothes, furniture, and the expansion of their residence. The expansion of the player’s home incurs hefty loans from the ever-encouraging Tom Nook. Personally, I find that I am only too willing to buy into this scheme as this is the closest I will ever come to owning my own home.

On the other hand, Nook nominates you as his right-hand minion in developing the island as a whole. Although you are always given a choice, if you really want to see the famed K.K Slider perform live, you are at Nook’s every bid and call. Isabelle, the administrative assistant to Tom Nook, is clear about what is required to ensure the island achieves an appropriate level of development. You must install infrastructure, beautify an island for the purposes of attracting visitors, and privatize land. Maybe I am just a masochist, but I did it all anyway. 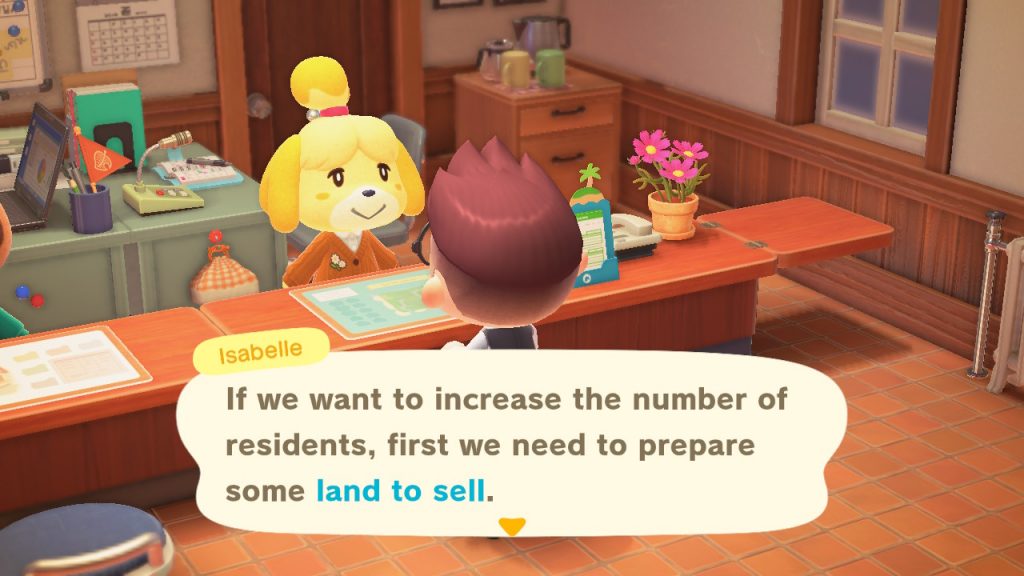 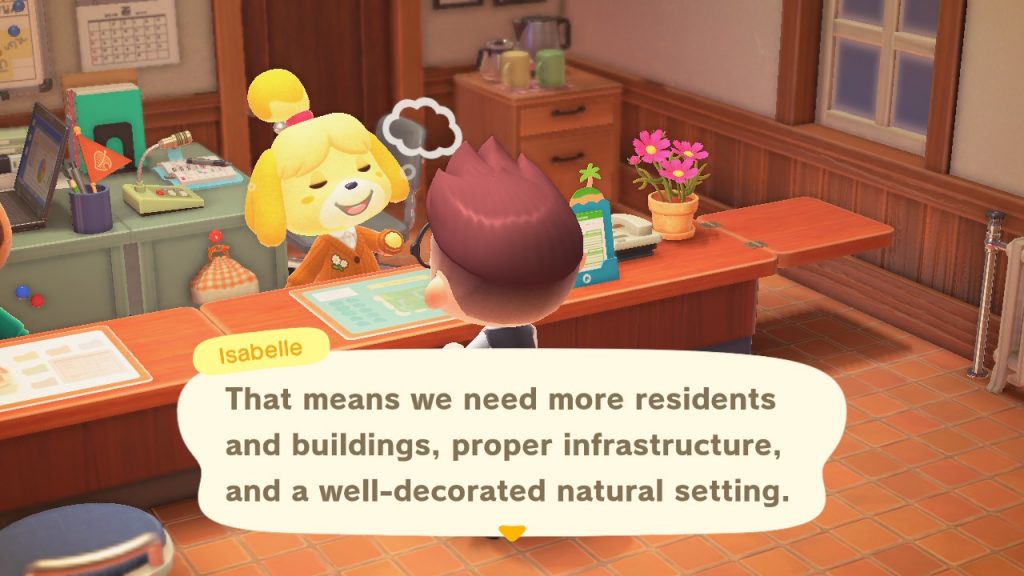 Once you achieve a high enough star rating and K.K Slider performs at your island, Tom Nook does relinquish some of his paternalistic oversight, but the expectation is that you continue developing your island, making it “better and better.” Do I dare tell Tom Nook that maybe I never wanted a two-story brick home in the first place? Of course not. I owe him my entire (avatar) existence. I cannot bear to let this tanuki down. 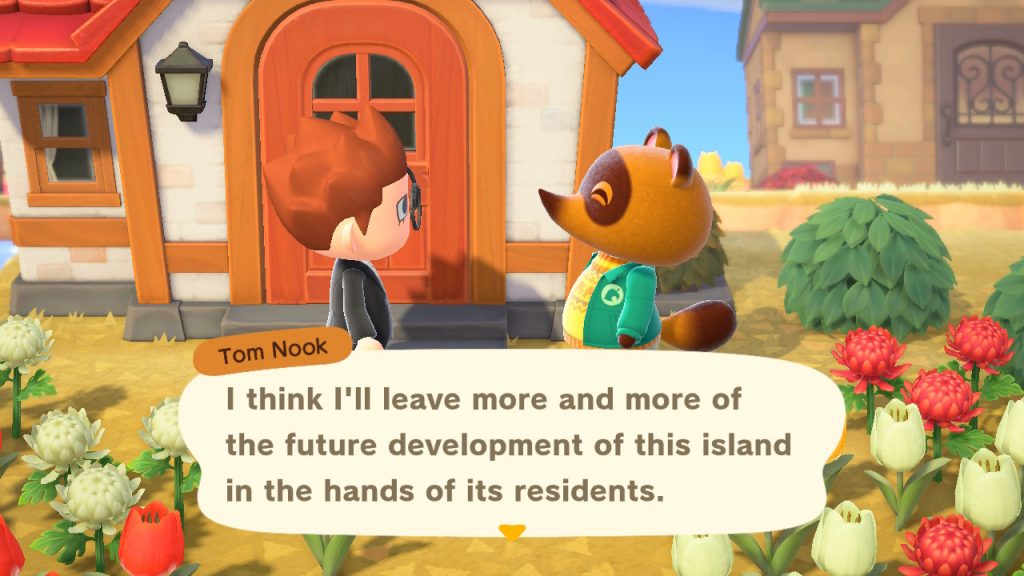 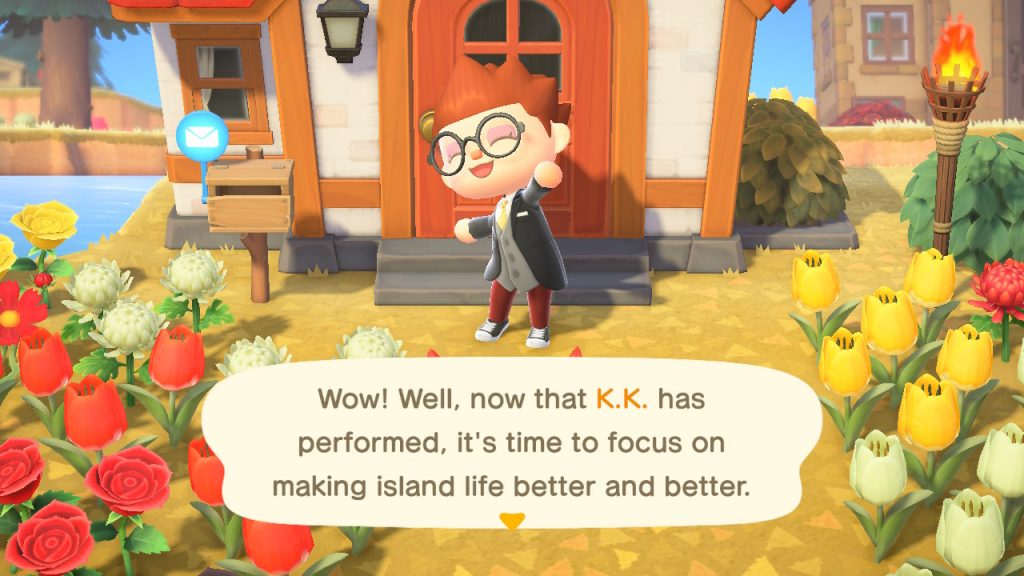 Tom Nook is the World Bank

Despite Nook handing over power, the core physical power structure remains geographically centralized. Resident Services, situated at the front and center of your island, is where Tom Nook and Isabelle work. Like Wall Street, Tom Nook never sleeps. Resident Services is open 24/7: debts can be incurred and repaid at any time of day. It is the hub of the free market mechanisms that dominate the island.

Echoing the World Bank, Tom Nook and his team openly advocate for the extraction of natural resources to generate income. The fossils you dig up can be either donated to the museum—curated by a stereotypically English owl; clearly modelled on the British Museum—or you can sell them. Both disposal methods are ethically dubious. The first relies on the premise that the island was vacant on arrival. The player is meant to assume that the island was uninhabited before Tom Nook claimed it and therefore there is no need to worry about Indigenous custodianship of any “discoveries” you might find. I have noted that there is a ghost who repeatedly returns to wander the island at night, but the circumstances of its death are never revealed… The other choices—to either hoard the fossil yourself or sell it on the market—echo the actions of archaeologists whose “discoveries” were more akin to looting.

When the British Museum gives back all its stolen artifacts. pic.twitter.com/YW65xKqNOL

You can strip the trees of wood, the oceans of fish, and the air of bugs, all of which can then be sold or created into another product, which can also be sold. But unlike the real-life World Bank which still ascribes to the vision of eternal GDP growth, the resources in Animal Crossing: New Horizons magically replenish themselves on a daily basis. Overfishing, deforestation, and species extinction are problems for the real world.

Of course, you can opt out of this system. Unlike other games, Animal Crossing: New Horizons refrains from guilting the player into engaging with the core narrative. The player can, as some have done, enjoy the game for its more repetitive, mundane tasks. That said, even these often involve draining the island of its natural resources for either profit or self-amusement.

The mirror between dream and reality is cracked. The development goals of Animal Crossing: New Horizons, as well as games like The Game of Life and Millsberry, are designed for only a very exclusive club, as James Baldwin described in The Cross of Redemption:

No other country can afford to dream of a Plymouth, and a wife, and a house with a fence, and the children growing up safely to go to college and to become executives—and then to marry and have the Plymouth and the house, and so forth. A great many people do not live this way and cannot imagine it and do not know that when we talk about democracy, this is what we mean.

In concurrence with other critiques of Animal Crossing: New Horizons, I see the game as a fantasy. It is a world that can only ever exist virtually because, in reality, this “island lifestyle” is unsustainable and has only worked for privileged minorities in Western countries thanks to centuries of exploitation. The “American dream” elements of these games are white, Western ideals. They are what individuals are expected to strive towards even if they are unattainable for great swathes of the global population in real life. I am complicit in the in-game development pathways. I follow the script. But I do this in the real world too. I live and benefit from a country that, like the United States, is a perpetrator of the current unsustainable international system. And that is a system that I find a lot more difficult to switch off.

This article was written on the stolen lands of the Ngunnawal people. I pay my respects to elders, past and present. I acknowledge this land was never ceded, sold, or given up and extend warmth and solidarity to all First Nations people. Always was and always will be Aboriginal land.

[1] There is also a notion of the “Australian dream,” which is similar, but due to the Americanisation of pop culture in Australia, I actually did not encounter this term until much later.

Emma is a student and freelance writer. You can often find Emma in the lost property box.