An Inclusive Future: A Recap of Game Devs of Color Expo 2020 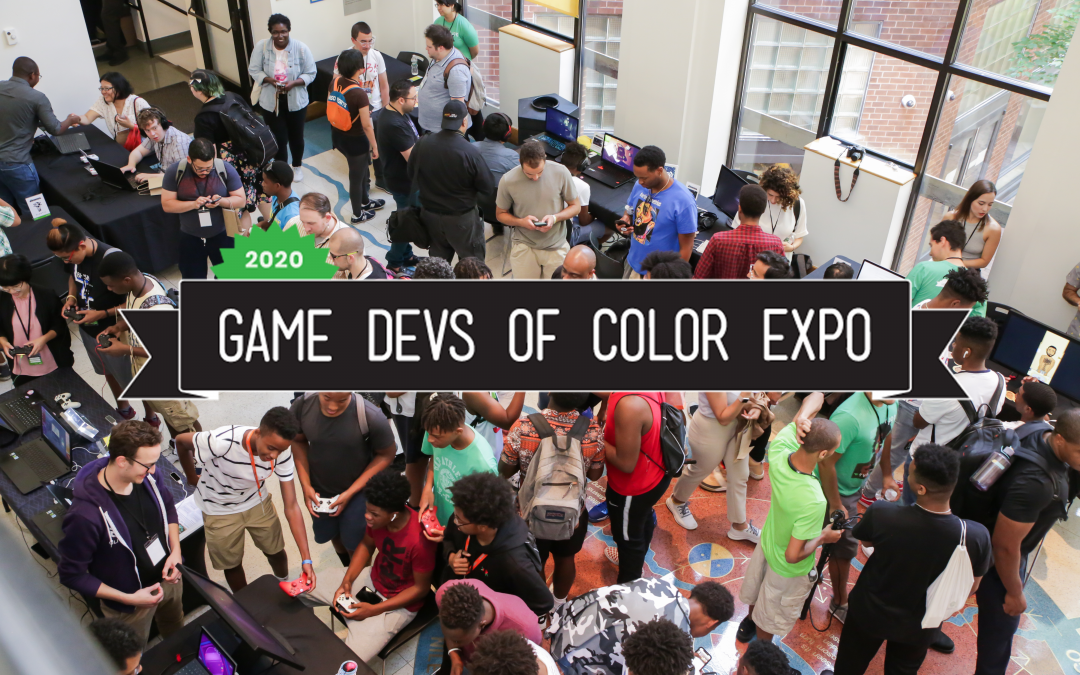 Like many shows this past year, the Game Devs of Color Expo took things entirely online.

GDoCExpo was originally founded to create a much more inclusive space for marginalized creators in the games industry. GDoCExpo’s fifth year was hosted on Swapcard, a platform used to host online conferences and meetups. The convention had the format of a typical convention guidebook with information tabs on the guests, games, and their developers.

All of the panels were pre-recorded videos, which allowed the presenters to edit their content and talk as they saw fit for their time slots. Attendees were notified whenever panels were about to begin, or they could opt into the “live session” setting, enabling auto-play to jump from one video to the next as scheduled. A live chat room was also available for everyone participating in the show to communicate with each other.

In addition to the main show on Swapcard, GDoCExpo worked with Steam to build a curated showcase called the Gradient Convergence, which featured not only some of their exhibited titles, but also other games helmed by marginalized creators that had already been released.

Prior to the GDoCExpo’s opening ceremony, co-hosts Sheila Moore and Kwabena Ampofo partook in a goofy skit in place of the complimentary breakfast meetups that some shows offer in the morning. (At one point in the skit, Sheila pours milk into a bowl of raw penne and eats it like cereal.) In the skit, Sheila is grimacing about her latest experience in what is implied to be Among Us, while Kwabena is arguing we need less competitive games that revolve around being pitted against each other and more about uniting and working together.

The first day of the show’s panels, Saturday, focused primarily on talks and tips for up-and-coming developers in addition to shedding light upon ongoing issues in the industry. In one panel, titled “No More Heroes: How Game Development Heroics is Killing Us,” games producer Shana Bryant discussed how the ills of the games industry hurt marginalized creators the most, making them statistically more likely to burn out and exit the industry much earlier than their non-marginalized colleagues. She relayed her own experiences to discuss how to combat these norms, such as reminding viewers to take appropriate self-care as individuals first. In addition, she provided rhetorical solutions for healthier workspaces in the future.

Sunday’s panels were more invested in highlighting specific games and interviewing their developers. GDoCExpo’s team did an amazing job in making the virtual experience as seamless as possible, if not more comfortable than a typical in-person experience. Each video was framed with an intro and outro that emulated the experience of going from room to room as attendees waited for the next panel to start. 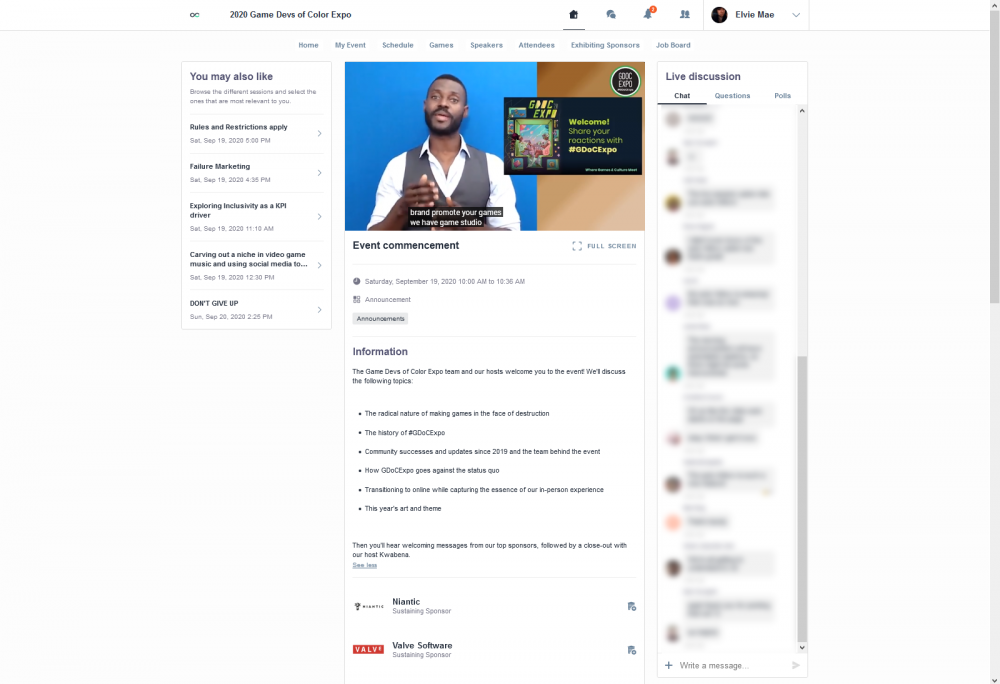 The chatroom gave viewers the simultaneous experience of talking with other people while the panel was broadcasting—which is something that would never happen at an in-person panel—and was an unexpectedly refreshing experience! The ability to bounce off ideas and questions in the midst of a pre-recorded conversation felt very involving, as if everyone was annotating the talk itself. The energy was high, despite there being an absence of any actual applause and cheering. Never have I felt more welcomed in a games space, let alone one that is entirely virtual.

Speaking of the games themselves, a complete list of the titles that were featured at the Game Devs of Color Expo this year can be found on their website. Displaying a variety of both highly-profiled titles and much smaller projects, these are but only several of many games showcased this year including those that were cross-featured on Gradient Convergence. 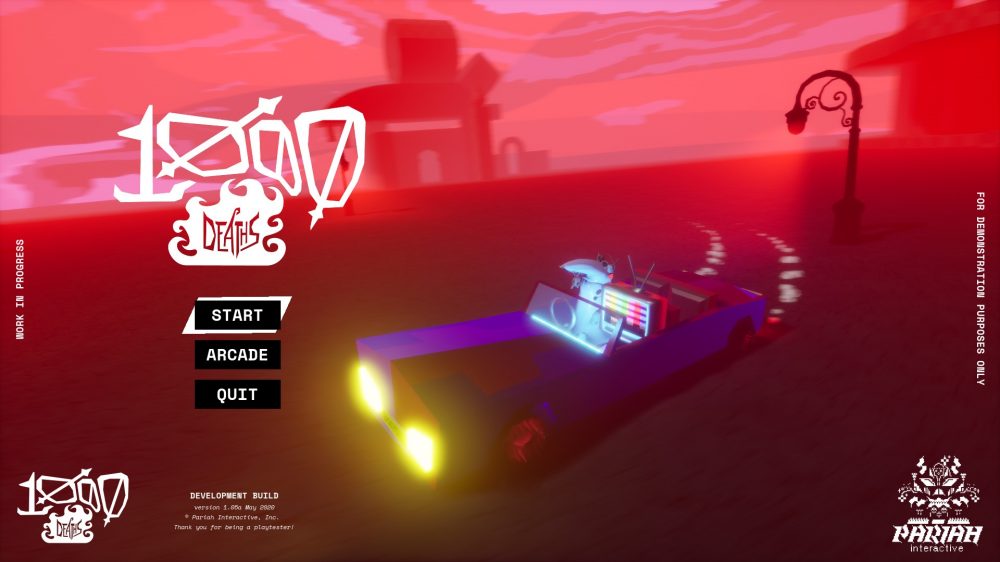 1000 Deaths is a fast-paced adventure platformer about confronting interpersonal conflict and the negative effects of media overconsumption. The game is rendered in a very wild, eccentric style and offers multiple endings. 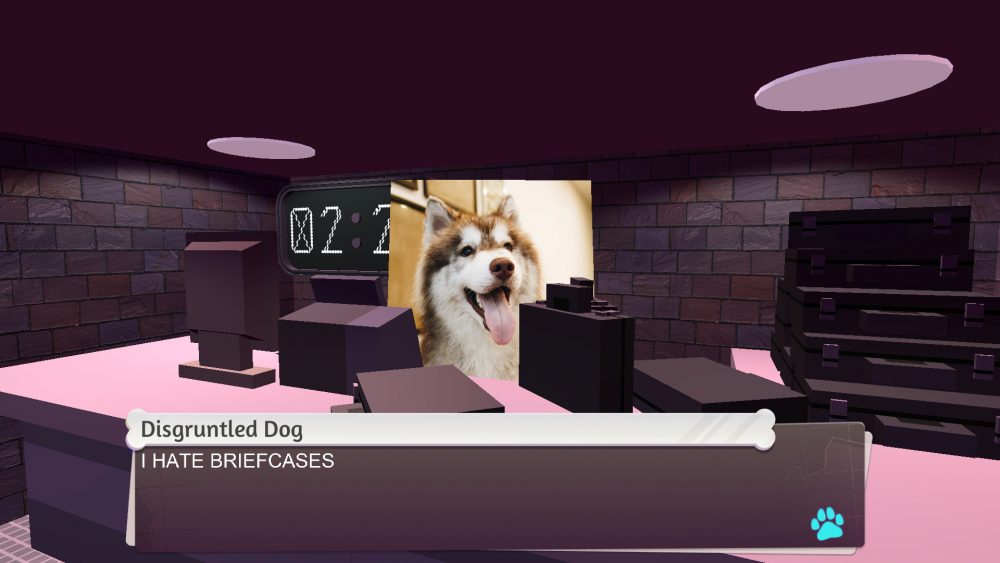 An Airport for Aliens Currently Run by Dogs

An Airport for Aliens Currently Run by Dogs is an open-world comedy in which you play as the last humans in the universe dealing with an airport run by strange, stock photo dogs. In an interview during the show, Xalavier Nelson Jr. explained that the concept of the game draws from his own experiences with airports, as he sees them as very liminal, hostile spaces that could be made more comfortable if dogs were added to the environment. 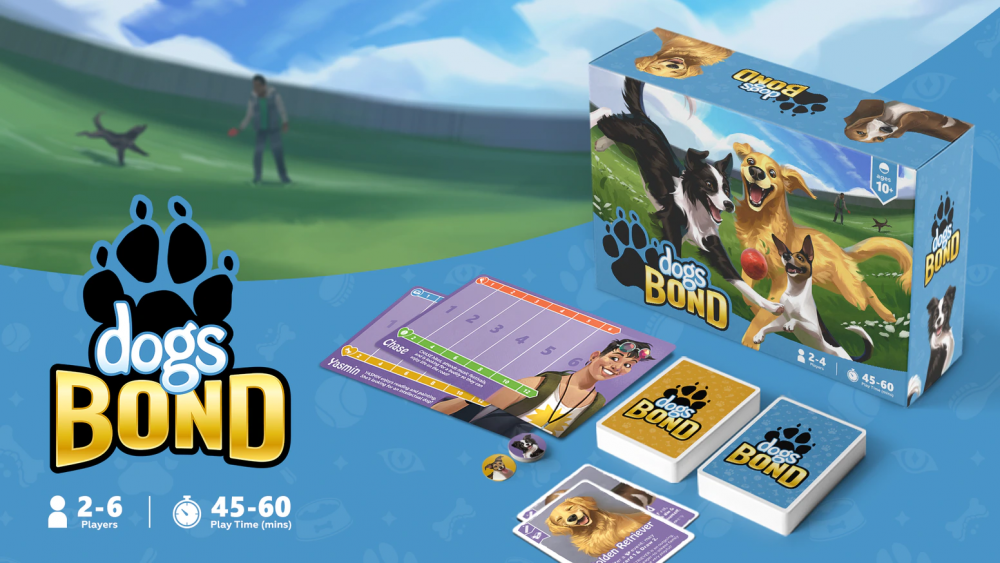 Dogs BOND is a board game that aims to raise conversations around rescuing and adopting dogs. In this strategy-based card collecting game, players play rescue dogs who must eventually find their way to get adopted by the home best fit for them. 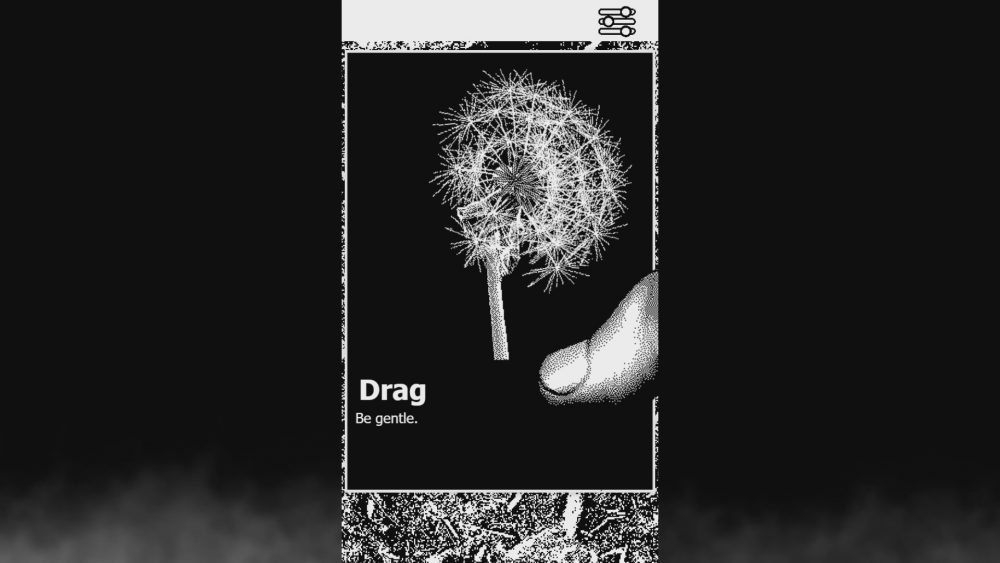 Finders, Keepers is an experimental narrative game in which players unravel a mystery by exploring a dating app. Players drag and touch the elements they find along the screen and play around with a monochromatically rendered UI as they uncover cryptic imagery. 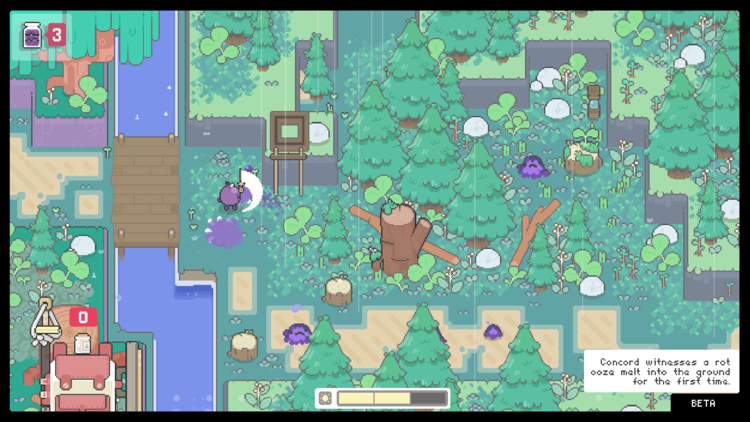 Jenny Windom, communications manager for Rose City Games, describes Garden Story as a game that defies typical game heroics by focusing on the idea of mutual aid and community building. Playing as a small, humble grape, the player helps rebuild a community ravaged by the Rot. 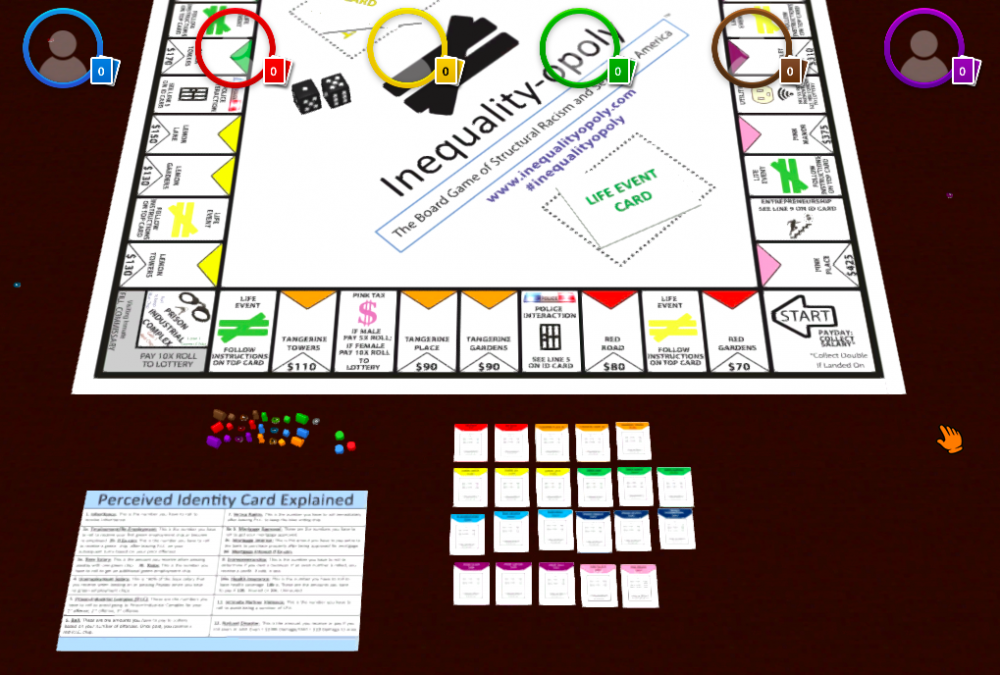 Inequality-opoly: The Board Game of Structural Racism and Sexism in America

Inequality-opoly is an educational game that cites national studies to demonstrate how racism and sexism affect wealth distribution. The game in itself is a parody of Monopoly, playing with the exact same set of mechanics and style of board. 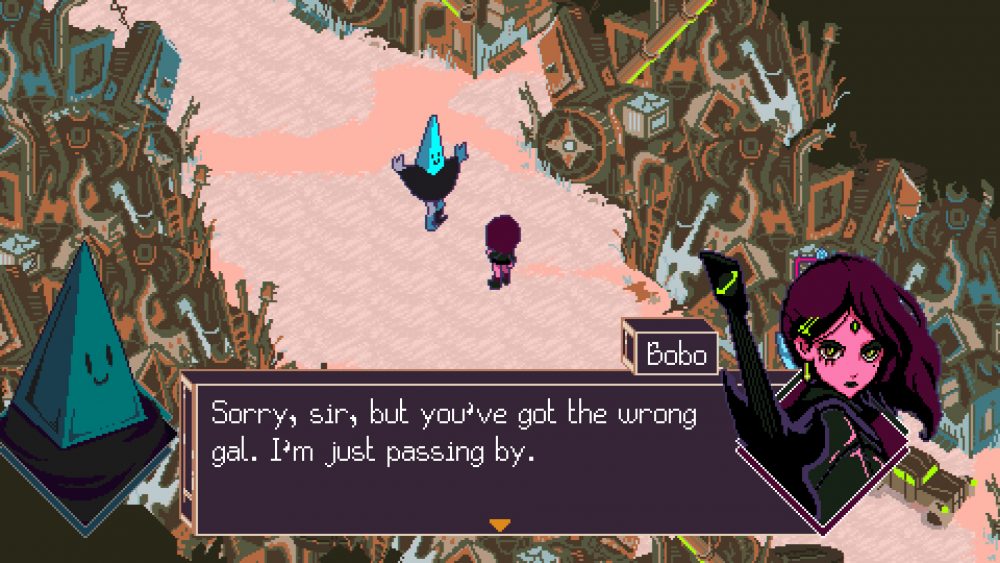 In a cyberpunk world where music is banned, players must band together with allies through the power of music and lead a rebellion in Keylocker, a rhythmic, turn-based RPG. 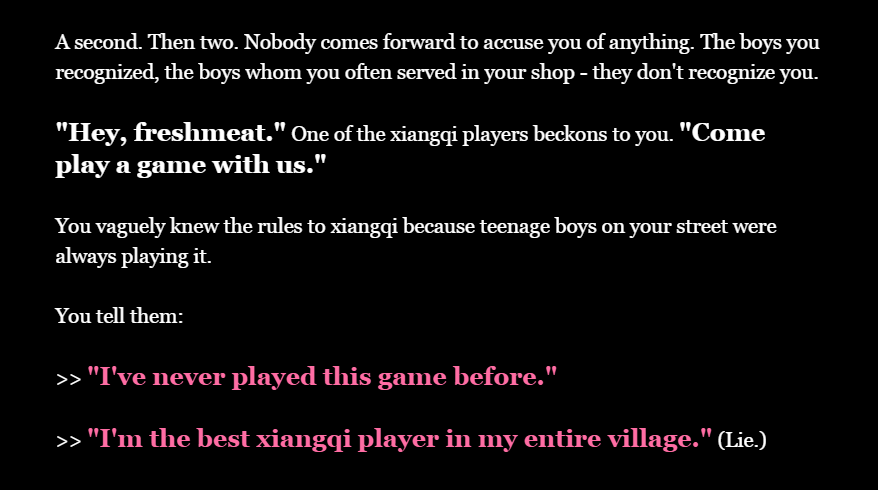 LIONKILLER is a narrative Twine game presenting an interpretation of Mulan, who is conscripted into the First Opium War against the British Empire. 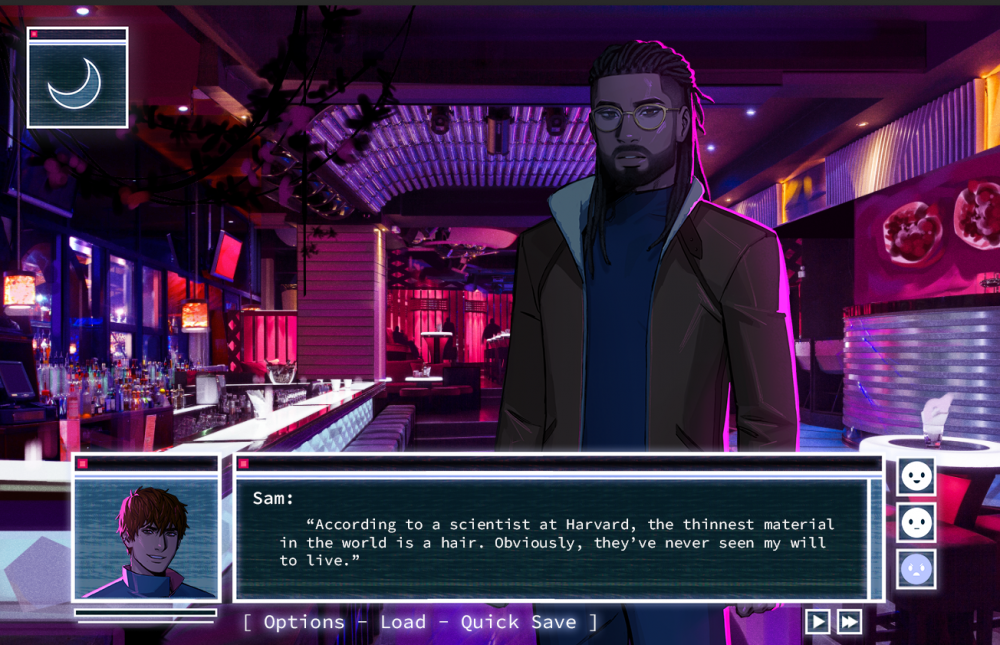 Love Shore takes place in a world following the fallout of a fertility crisis. In an effort to solve the problem, a corporation steps in by creating artificially-modified humans and setting them out to live with the rest of the population. The crisis gets resolved, but the corporation goes under, abandoning its creations and leaving them with only the baggage of who they are after. Perfect Garbage, the game’s developers, wanted to create a queer cyberpunk game that demonstrated their own interpretation of the harms created by capitalism. 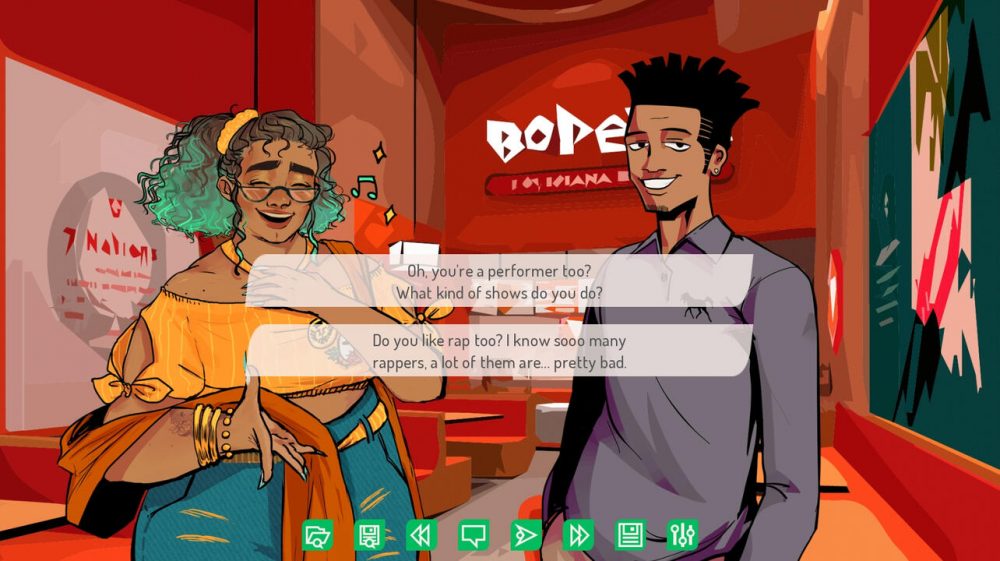 ValiDate: Struggling Singles in Your Area

ValiDate is a dating sim that follows a huge cast of adults in their twenties as they try to find the answers to their lives through the messy ordeals of dating. Dani Lalonders, the head developer of the game, commented in-show during an interview with her team that it was important that this game was representative of their personal experiences. ValiDate‘s development was led by a Black person, which is especially important in an industry where that behind-the-scenes representation is not apparent to many players.

After the show had ended, I had some realizations: it was clear hours into the experience that although direct engagement through video worked well, Swapcard is not an ideal platform to actually play games. A person would have to leave Swapcard to an external site to further engage with the games, such as the Gradient Convergence showcase hosted on Steam. Because GDoCExpo overlapped with a couple of the dates of PAX Online 2020, Steam also unfortunately prioritized PAX’s curated showcase over Gradient Convergence on their homepage. 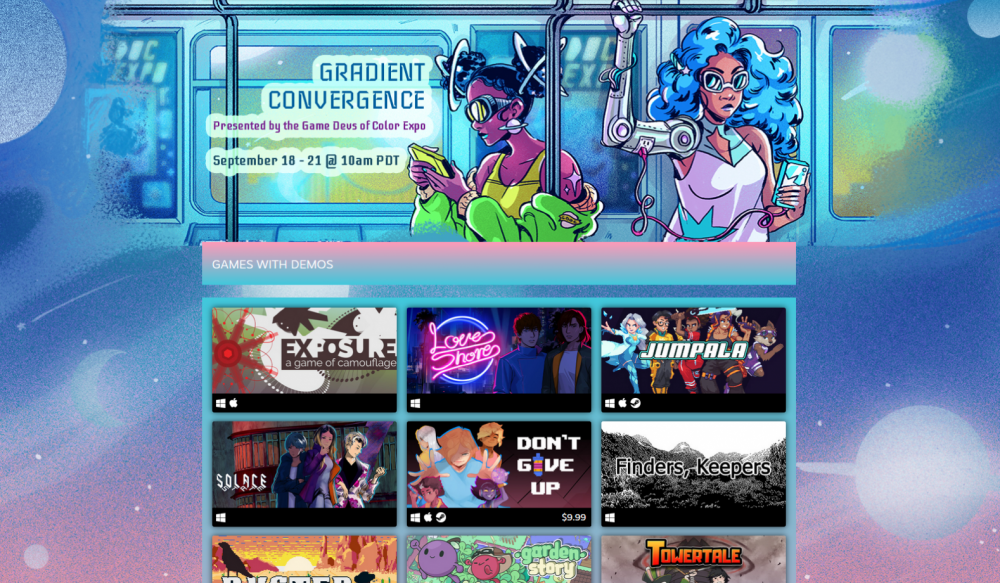 Video games also overshadowed tabletop games, as many tabletop games are designed to involve direct person-to-person interaction. It definitely is a huge undertaking for the games’ designers to have a remote-play version of their projects ready in tight circumstances. In the future, perhaps tabletop game designers should be encouraged to prep a remote-play version of their projects ahead of time, or even opt-in to have a pre-recorded demonstration of how their games play.

I would have also liked a page that served as space for people to simply chat with no event attached to it. This would be similar to break rooms that some conventions offer to their attendees as a place to sit down and de-stress from the rest of their show. I couldn’t really linger to continue a conversation in one panel’s chat room because inevitably many would leave the page to move on to the next event.

Otherwise, anyone registered for the event can easily return to view the panels and other information for the remainder that GDoCExpo stayed online on Swapcard.

Attending GDoCExpo was a relief in the midst of the seemingly never-ending reckoning of 2020. GDoCExpo is typically scheduled around the peak of summer; this year was an exception, as the convention was scheduled during the transitional period into autumn. Despite hesitation, the community made it clear that the show must go on. GDoCExpo is a firm effort against not only the failings of the games industry, but of the very systems that perpetuate those failings. It is poetic for GDoCExpo to thrive against the setbacks that could have easily pushed its cancellation this year—its survival serves as a beacon of hope.

As Shawn Alexander Allen, game designer and one of GDoCExpo’s organizers, eloquently put it during the show’s commencement ceremony opening, “Making games in the face of destruction is radical.” GDoCExpo was able to serve as a safe refuge for creation and the ideas to continue against the adversity of the outside world.

It’s not just about making more positive games about better futures. It is also about nurturing those communities around games to develop the actual future, as well. In every year of its run, GDoCExpo is trying to establish a new normal, and this year’s show has certainly set the standard for a possibly more inclusive future by proving that the physical or socio-economic barriers in the industry keeping many out can be torn down. Without actual walls to walk through, what’s stopping anyone from running? 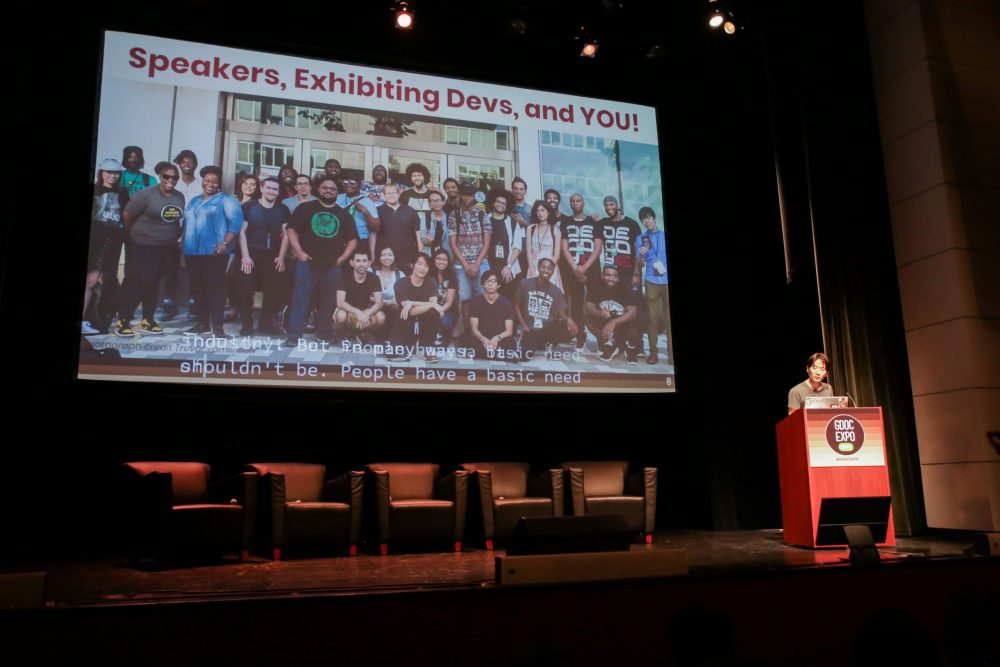 Recordings of panels from the show’s previous years can be revisited on their YouTube channel, and you can find my recap of the Game Devs of Color in 2019 here.