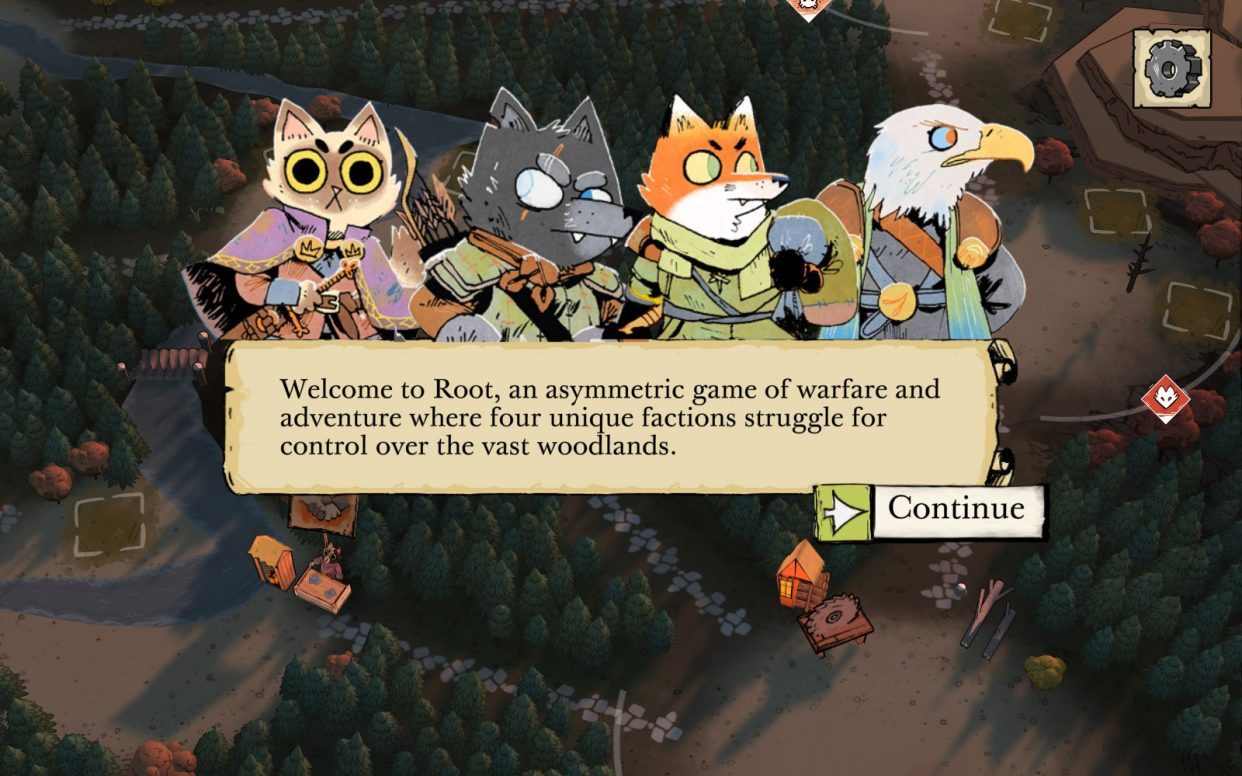 At first glance, Root seems like a very wholesome game, with a very welcoming, cute, and fuzzy art style of animals adventuring and frolicking out in the woods. But Root is more than its exterior: it is a game of war, conquest, and sometimes, revenge.

Sidequest received a free copy of Root in exchange for a fair and honest preview. This piece was written before Root’s full launch on September 25, 2020.

Root, which styles itself as “a game of woodland might and right,” is an asymmetric board game in which players take on a role under one of four factions seizing for control of the forest. An asymmetric game typically assigns players significantly different roles, granting them each their own unique perks, abilities, and disadvantages. These roles each have specific goals that oppose those of competing players. This puts an important responsibility on the game’s designer to ensure that each of these differences are balanced so that anyone can fairly win.

Root’s digital adaptation has recently opened its doors for play in an Early Access phase, and I had the opportunity to try it out. The differences between Root’s physical board game and its digital version are very minimal. If there were any changes made to the analogue version of the game at all, they’re barely noticeable, translating much of the original system directly into this new format.

Root takes place entirely within a forest. This forest is mapped out through a series of spaces and clearings connected by paths, scattered across the board for players to navigate. Whether in the form of building workshops or building stations to increase a faction’s numbers and resources, each space represents an opportunity to claim territory. These spaces are also marked and labeled as territory dominated by certain animals, and this additional element influences, and can potentially add challenge to, one’s playing strategy.

In order to win, players must collect a certain number of victory points. Although it is straightforward to say that players should acquire and claim territory in as many spaces as possible, how to accumulate these victory points varies across the different roles.

Combat in the game is based on a simple system that uses two dice rolls to calculate damage, which can be affected by other elements, such as cards being used to boost attack numbers or avoid damage altogether. Depending how high the roll, it can potentially mean even destroying the buildings in the space occupied at that time.

To be a subject under the court of the Marquise de Cat is to believe in taking full advantage of the wood’s potential riches. Players must focus on building and crafting in as many spots as desired, all while managing subjects to build a decent army. The Cats are the faction Root recommends to learn the game’s basic mechanics via tutorial, so they were the first faction I played. Overall, I felt that the Cats were definitely the best balanced team for one to flexibly jump from combat to a more non-offensive way of playing. 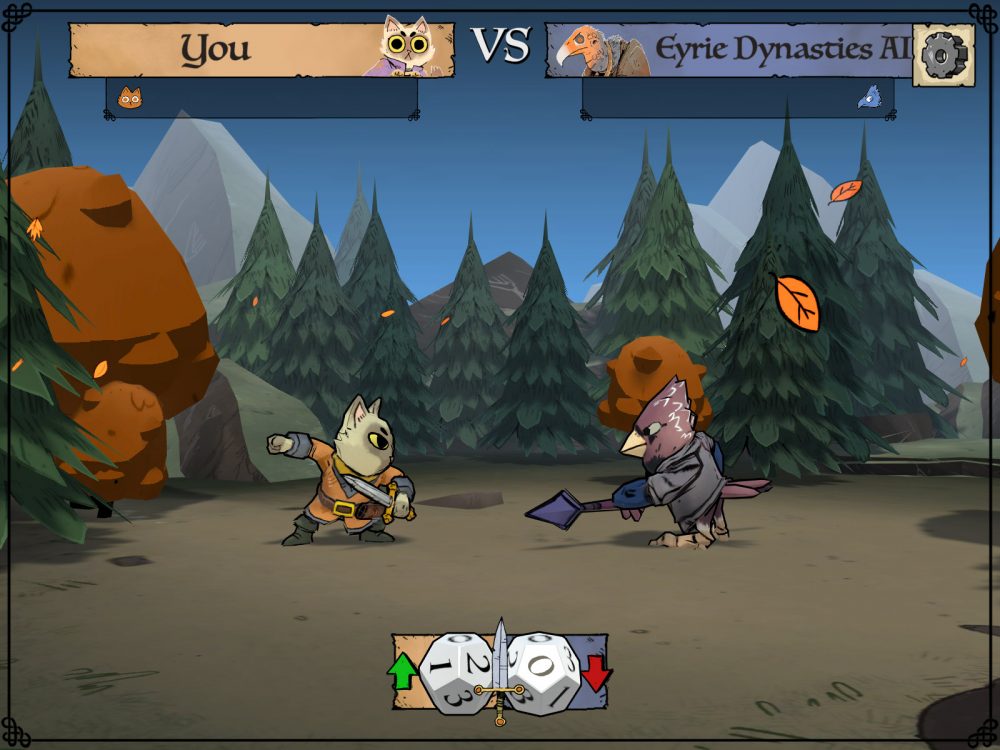 Meanwhile, the Eyrie Dynasties channel their resources towards growing their feathered flock and take on a more offensive role than the Cats. The Eyries focus on planting as many bases as possible, which, in turn, helps increase their numbers much faster compared to the other factions. Playing the Eyries takes a lot of strategic planning, and in some ways this makes them the most challenging faction to play. Selecting the Eyries, I had to pick one of four specific leaders, each of whom carry different advantages and disadvantages that influence play. They each provide stats that can offer buffs, like if there is a preference to combat or prioritizing crafting. In addition, Eyries use a special mechanic called decrees, in which a card must be sacrificed to take particular actions for that round. Cards each have symbols on them, such as the symbol of a fox or a rabbit. To be able to perform an action in a space marked by the fox, a card with said symbol has to be given up. There is freedom to do other things, but a decree’s requirements must be met every turn. If not, players are forced to choose another leader and lose victory points. I had a difficult time playing the Eyries due to all these dynamics you must pay attention to, and only because of the patience of the AI in the tutorial mode was I able to eventually meet the requirements to move on. It’s certainly not a faction I would recommend if you are learning Root for the first time.

In the background, the Woodland Alliance hopes to quietly stir revolution, seeking to overthrow the tyranny of any despot that might take over the wood. Instead of focusing on combat or claiming territory, the Alliance aims to collect supporters. I had to increase their numbers before they were able to build more resources. Eventually, I could create warriors from these supporter numbers to defend themselves, but battle is something best avoided when playing the Alliance. Playing the Alliance was a thrill and very different from the experience of playing the former two factions. It is perhaps the most non-combative faction and ripe for self-insertion when one wants to fantasize their own uprising by quelling the expansion of the especially despotic Cats. 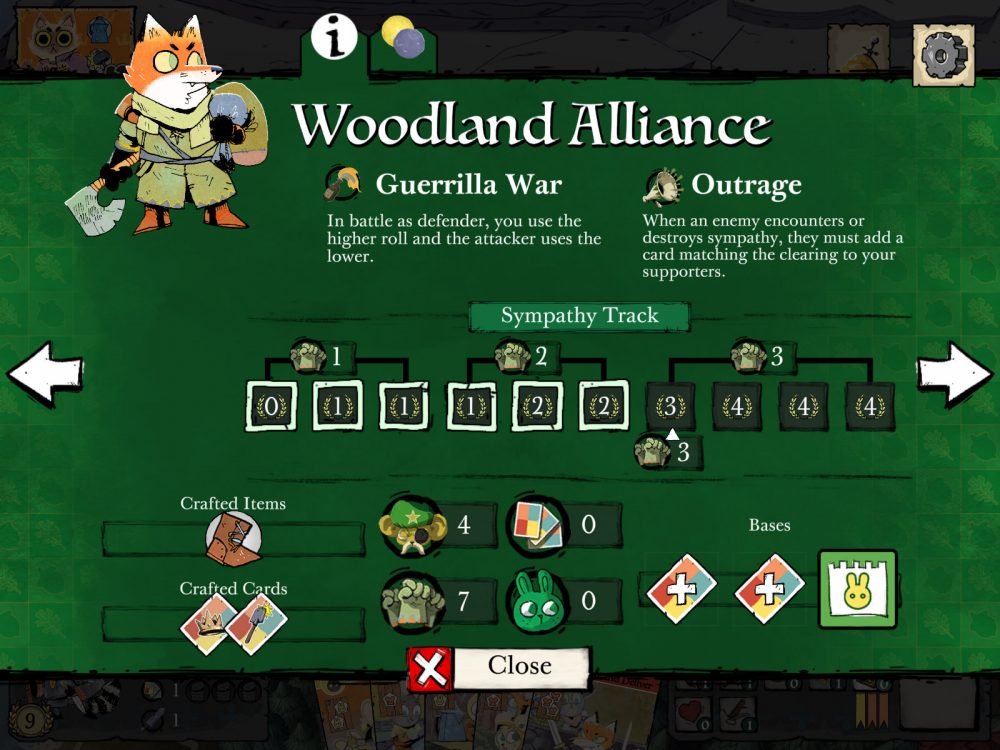 As the three factions squabble, the player’s fourth role option is the Vagabond. The Vagabond has no faction, working alone to help or sabotage other players. Playing the Vagabond, I got victory points by earning approval from other factions or by fulfilling personal quests. Quests often demand specific items, and these items can in turn be received from other factions that the Vagabond goes out of their way to help. Although I have previously mentioned that I felt that the Cats were the most balanced, I think the Vagabond was the most fun for my needs, since it is the most distinct role compared to the other three. The Vagabond also has the most unique rules system, having to abide by self-sufficiency. I needed to focus on collecting items, which were key to the number of actions that I could take per round. But because I lacked numbers as the Vagabond, I was also at my most vulnerable, and to engage in combat often meant sniping a loner with their defenses down. If I could manage this all by merely avoiding stepping on anyone else’s toes, I could quietly sneak my way to victory.

Root manages to recreate what would typically be harrowing and heavy in a typical war strategy game as something that is reasonably charming and funny. All in all, my first impressions of the digital version of the game are promising: it represents a near-perfect adaptation. Compared to the overwhelming clutter that inevitably grows with a board game, Root’s digital version also presents necessary information in a neat, concise manner that one can easily cascade through. With a UI themed and designed much like the elements of the original game, the splaying of cards and smattering of tokens required to play an average game is streamlined.

That said, I think this literal translation does a bit of a disservice to the digital game. Root is pretty explicit in its complexities due to its different rules systems, and I think the digital version of the game would benefit greatly if it provided a difficulty scaling system. As a digital game, it also has the flexibility to provide more customizable play: different game modes could encourage players to play around with settings and mechanics, such as being able to adjust game length or create limits on item or card usage. This would make it stand out in comparison to the original board game as opposed to just being a mere copy of it. 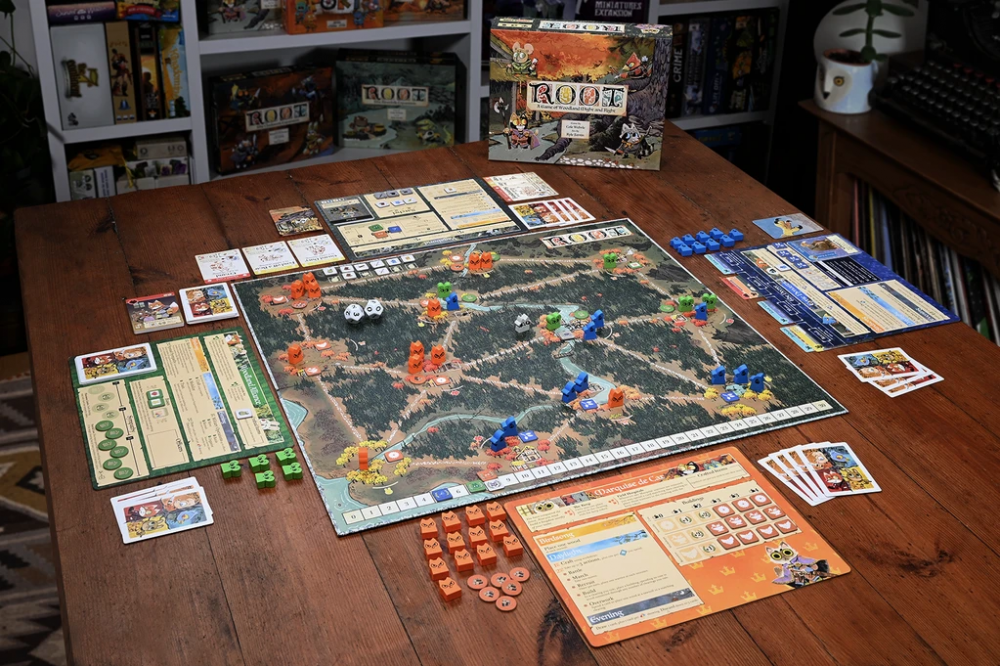 But I think the one part that the digital version of Root actually fails to translate from the original game accurately is its art style. I think the chosen 3D graphic style doesn’t have the same charm as the flat, two-dimensional illustrative quality of the original board game’s art. Although there may be numerous practical reasons for this decision, to see the beautiful pastoral illustrations in this format would have been impressive. It is jarring to have to face characters that don’t quite look as they do in the in-game card art and other UI elements.

Dire Wolf, the game’s developer, assures that cross-play integration is still in development and will be available in the game’s full release. I am also expecting the eventual inclusion of expansions, such as The Riverfolk Expansion, which adds two additional factions and a new map. It has been encouraging that more board games are looking towards more diverse ways to play, especially if a physical space is not readily accessible. I am curious about what new features the final digital version of Root will have to offer, but I think the original game is something worth exploring, too.

Root is currently in Early Access and is available for PC and Mac on Steam.