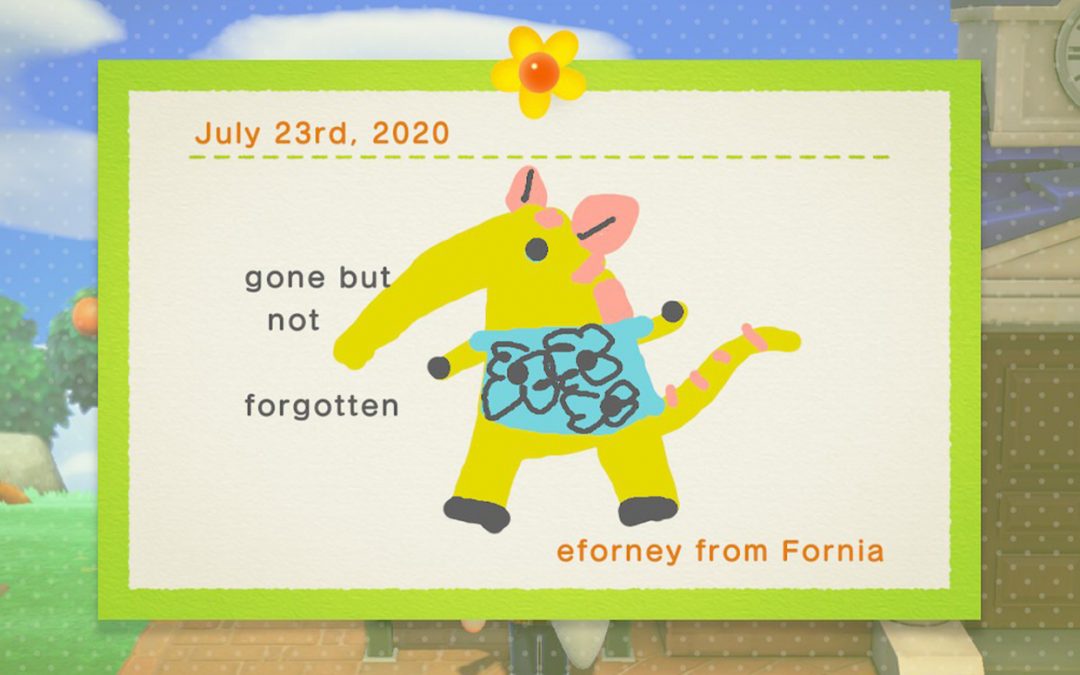 This piece is a loose work of fiction inspired by Animal Crossing: New Horizons. The author is not actually in love with an anteater.

Anabelle wasn’t afraid to stand out.

She was impulsive, dramatic, rebelliously optimistic. She was with me from my earliest days of my newfound island life, the first villager I found looking for a new home. She started calling me “Sweetkins” almost immediately. I’ve never been one for pet names, and at first, I bristled at the unearned intimacy, but I quickly grew fond of the affectionate address.

And she was the most beautiful anteater I’d ever met.

At first, I thought she was, eh, somewhat entertaining—albeit vapid and self-centered. She thought the entire star system revolved around her. I would shrug off her taunts as though they were the silly daydreams of a preppy teen. But as time went on, I realized she had a depth of character I hadn’t yet seen on my island. And she was truly, truly talented.

She shone like the sun. I realized, slowly, that I actually had started to revolve around her.

Every day, I would go to her house, spend time with her sitting under the money tree I planted nearby. She thought of herself as the first famous pop-star-slash-DIY-guru. She taught me how to build furniture. She playfully teased me whenever I got more attention than her.

One day, she bared her soul to me in a letter. As I read, I fell. I knew she had so much more to share, and I wanted to go deeper. I wanted to know her.

I grew to love her, and she quickly became my favorite villager. I gave her gifts (she especially liked her new meme shirt). I spent hours decorating around her house to make her a beautiful oceanside vista. She was by my side through all of our island’s biggest moments. 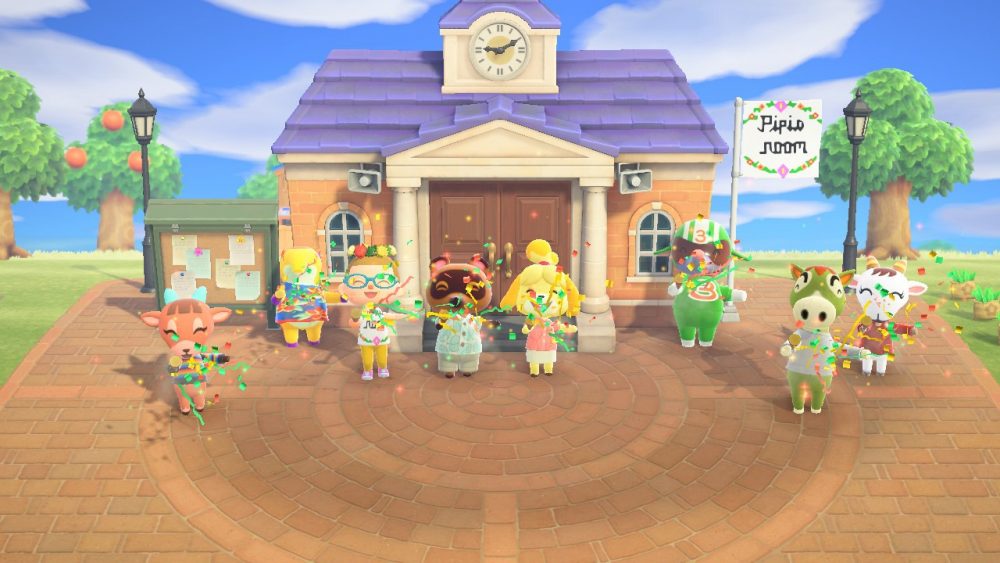 This photo was taken back when we celebrated the opening of the community center, and when I was still cosplaying Griffin McElroy. Anabelle supported me patiently through that… interesting phase of my life.

But after a time, Anabelle became quiet and introspective. On more than one occasion, I caught her walking around aimlessly, pondering, deep in thought. She wanted more. She had dreams. She had been talking about being a star—being famous, living in the big city—from the moment we met. She was ambitious, and I couldn’t justify stopping her.

So when she told me she wanted to leave, I didn’t stand in her way. She packed her bags, and I let her go.

For weeks, I mourned the loss of my favorite villager. My friends visited my island, and I showed them the empty plot where she used to live. E. Forney created a beautiful homage on the billboard in my town square. 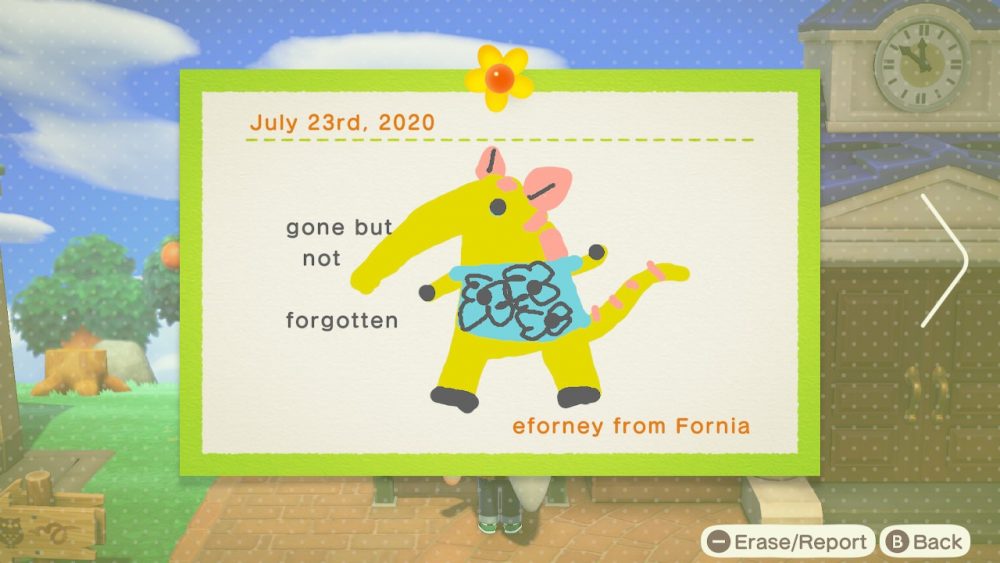 An uncanny likeness. E. Forney is a true artiste.

Eventually, a lovely cow named Tipper moved into Anabelle’s house. I didn’t mind Tipper, but there was always something missing. There was an anteater-shaped hole in my heart, and Tipper’s sweet and wonderful bovine form just… didn’t fit.

Timmy and Tommy Nook were selling a diamond ring one day, and, for a while, I carried that ring in my pocket, in a silly daydream that I would run into Anabelle somewhere on my frequent Dodo Airlines island tours. It, of course, never happened. 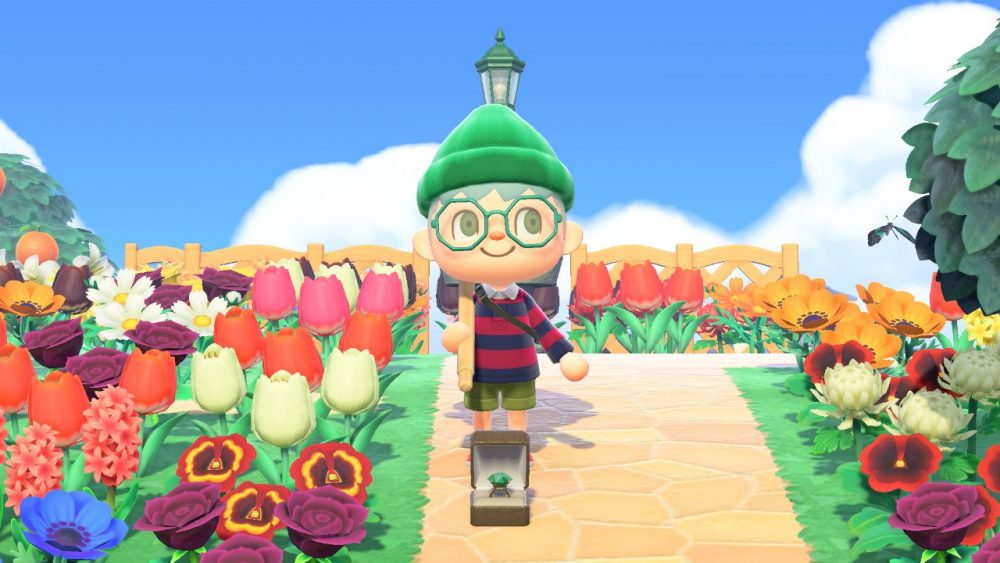 Eventually I realized, after some long, hard, painful introspection, that even now, by asking Anabelle to stay with me on my island, in my home, I would be asking her to give up on her own ambitions. She deserved to travel the world. To become a star.

So I put the ring in storage, and I fondly hung a poster of Anabelle in my bedroom, a reminder that my first AC love was somewhere beyond the horizon, living her dream.

Until one day, I visited my friend Alex’s island. And there she was.

I hadn’t heard from her in so long. I’d been imagining her new life in the big city, recording pop albums and dancing in the evening lights, surrounded by larger-than-life neon billboards sporting her own face. I had believed she was off fulfilling her dream, yet here she was on another small island, and she seemed to have settled in. And worse—she didn’t recognize me. At all.

I won’t say I was heartbroken, because I had long since moved on. I’d met new villagers, ones who were starting to heal my wounds with their gifts and kind words. But I was disappointed. Disappointed that Anabelle didn’t remember the times we shared, the intimacy we’d formed. It was as though she had completely wiped me from her mind, reset her memory. I went home to my island, defeated.

Tom Nook had long since asked me to act as the island’s recruiter and representative, so soon after, in the midst of my heartache, I was exploring off-island to find new villagers. Tipper had decided, like Anabelle before her, to move on, and I was once again searching for a new resident to take up the empty home.

On a remote island in the middle of the ocean, I found… the most beautiful anteater I’d ever met. After a quick conversation, she impulsively decided to move to my island, and I felt… hope. I hoped that she would be happy here. With me. 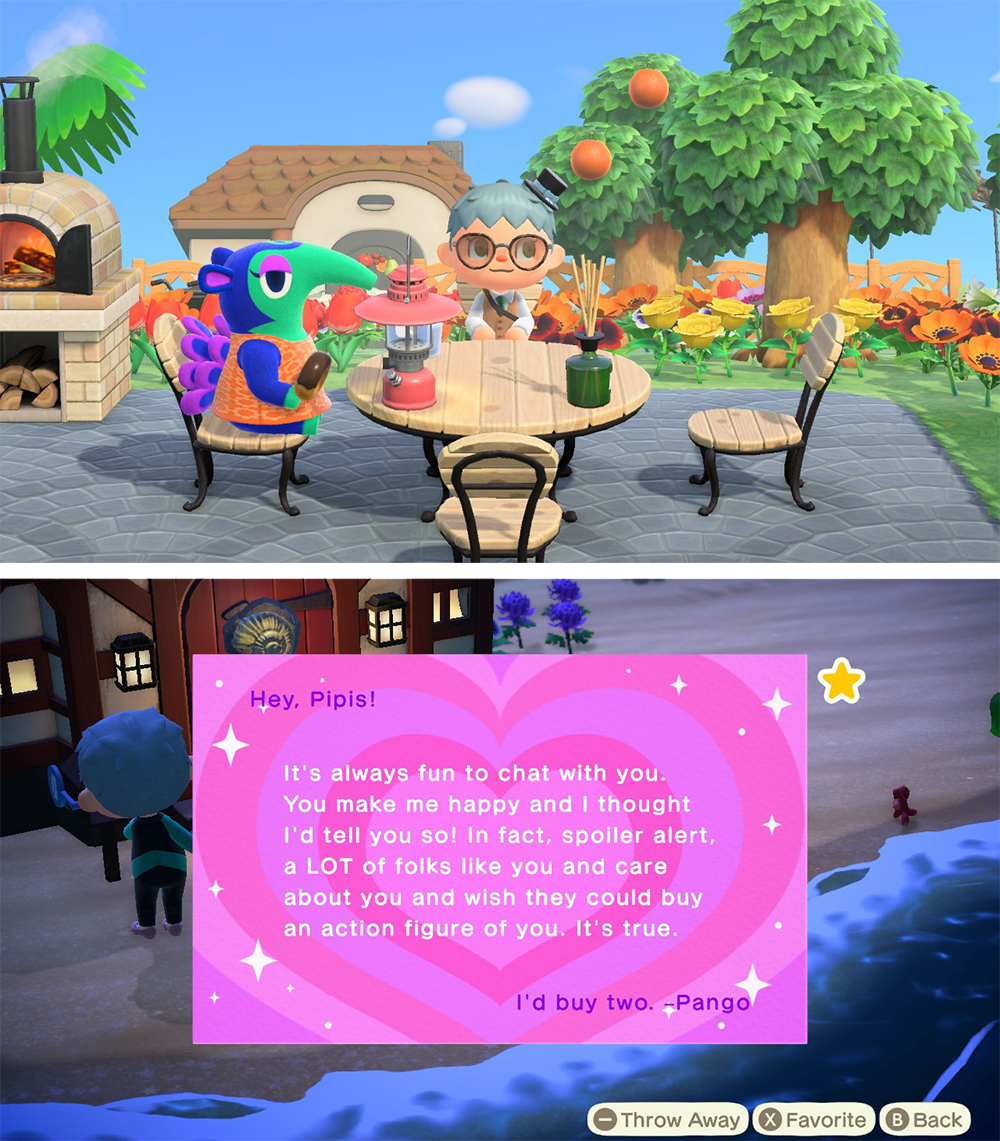 Look, I have a type, and it’s beautiful drama queen anteaters.

Now Pango’s letters quicken my heartbeat. She calls me her “special Pipis.” I don’t know where we’re headed, and we’re still getting to know each other. But for now, I’m enjoying our donut dates.

And I’ve removed the Anabelle poster above my bed. One day, when she’s famous and I’m listening to her on my baby blue portable radio, I’ll hang it back up—this time in my north wing music room, where it belongs.