Review: Dead Friend Reached Across the Veil and Brought Me Closer to the Living 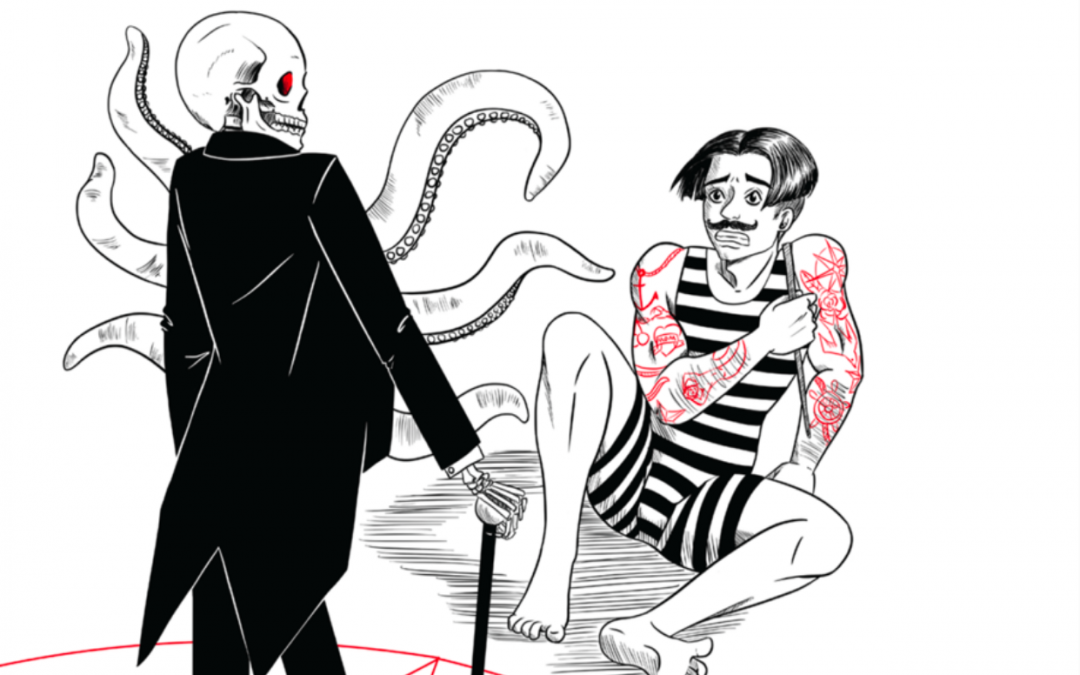 Here in Kyushu, Japan, the past few days have been hot and wet. It’s Tsuyu, or the rainy season, a month and a half of near-constant tropical storms. It’s a time when the air is thick with something ethereal, and heat exhaustion and nighttime hours make the supernatural feel possible. 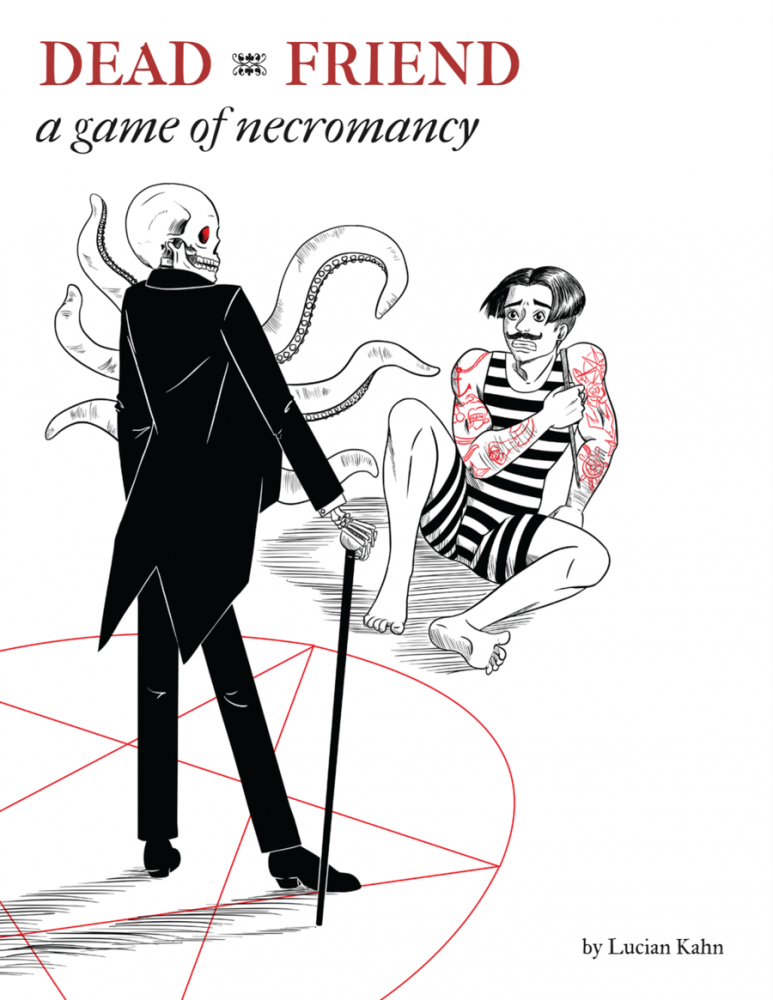 It was during one of these summer storms that my friend and I decided to meet for a hangout session. (It should be noted that after a month of no cases, COVID lockdowns have been lifted in our prefecture.) It’d been a rough week to be away from home, and we wanted a few hours to process and distract in equal measure. We didn’t have any plans, but I had recently come into possession of over 1500 games through the Itch.io Bundle for Racial Justice and Equality.

While she played around with A Short Hike, I searched through my library and described ones I thought she might like. Eventually, I came to Dead Friend.

According to the manual, “Dead Friend is a collaborative storytelling game about necromancy. The living and the dead take turns developing their characters, shared history, and conflicting motivations. All the while following the dramatic structure of a necromantic ritual.”

She looked up from her game and said, “Let’s try it” with all the excitement of someone who just found a ouija board at a party.

I was really surprised when my friend suggested we play; she isn’t usually the type to enjoy ghost stories. As we read the rules together, she almost went home at the mention of “diabolical polygons.” Everyone knows necromancy gets serious at geometry.

This game really did hit me at a surprisingly relevant moment in my life. Last month I started an ancestor veneration practice. This was the first time I’d had anyone over since building a prominent shrine to the Blood of my Blood and Honored Dead. Explaining something so personal to an outside observer was a vulnerable experience. It ended up adding a sense of weight to what we were about to do.

As the storm raged outside, wind howling through my living room’s cracked windows, we prepared the ritual. At midnight, we shut down all our electronics except the shared laptop that contained the game’s rules. I didn’t have a printer so I drew the required pentagram on a piece of paper by hand. I set it on my small kotatsu next to the same tarot deck I’ve used since high school.

The geometry in question.

When I brought out the optional matches, my friend got antsy. “What if we actually summon something?”

But she poured the salt circle anyway.

The atmosphere of Dead Friend certainly lends itself to fear. The two players take turns acting out a necromantic ritual. One takes the role of a living magician, and the other, the eponymous dead friend the magician is trying to speak to. There are real ritual actions that the living perform: invoking pentagrams, calling out to the dead, manipulating effigies.

Meanwhile, the dead’s responses to these actions add flavor and direction to the narrative. One example is humming every time a certain element of the ritual is moved, or choosing a single word to call out from beyond the grave every time the ritual moves phases.

Together, the two friends pick a setting and conflict (including individual motivations) for their characters. Over the course of the ritual, they draw tarot cards, or normal playing cards, to generate prompts related to aspects of their relationship and lives.

As my friend and I played, we ended up telling the story of two first-generation college kids—Red and Jon—who discovered a dream of living off the grid through their liberal arts university’s earth sciences courses. Like a lot of improvised storytelling games, the narrative took unexpected twists as we took turns narrating and responding to each other’s additions. There was a generative phase where we got used to each other in this context and provided as many story threads for the other as possible. Then, independent of any explicit game rule, we figured out what kind of story we were trying to tell and let most of the threads drop.

Red and Jon were being hounded by loan sharks, and without their curmudgeonly mentor Mirelda around to help them figure out the next steps, their relationship became strained. A backdrop of protesting racial and economic injustice formed an unintentional connection to our present moment. Towards the end, a genuine sense of betrayal between both our characters and us as players arose when Jon abandoned Red in their mountain cottage to return to work in the mines. Their last conversation was a fight as they split.

My living room had a charged atmosphere almost the whole way through the game, but it really built around that moment. The ritual framework doesn’t really allow space for the players to casually speak to each other out of character, so we had to operate on pure trust that the other person was working to create the same story we were.

It was an emotionally exhausting, and rewarding, experience.

The final act of the game takes place in a (metaphorical or physical) battle. After the dead has been summoned into the world, they try to enact their motivation while the living enact their conflicting one. A fight didn’t make sense in our story, so we ended up with a battle of will and words. We each drew four tarot cards representing weapons we could use to convince the living to let the dead wreak havoc, and the dead to give the living closure.

By far the most powerful moment in the game came during this climax. We’d opened the windows in my house fully to try to vent some of the heat between windstorms. I pulled the Ace of Swords, which allowed me to invoke a higher authority in our battle.

In a stroke of inspiration I didn’t have time to fully think through, I described Jon speaking in a voice that wasn’t his own and adopted Mirelda’s accent. As she chastised Red for not taking action in the face of the injustice Jon had faced, the gusts picked up again, whipping the pentagram and half the tarot cards off the table. Neither of us missed a beat, continuing our battle as a small whirlwind tore through my living room. It was charged and emotional and at times both of us teared up.

The writer’s recreation of the scene (minus the salt).

After that we needed some grounding, and the game provided. Players decide whose motivation wins out through open discussion as players. We took a moment to discuss the wildness that had just happened, reset, and get back on the same page before we wrapped up the epilogue.

We ended up deciding that Jon and Mirelda were testing Red, that they never had any intent to invade the world of the living and burn it down, but rather that they wanted to light a fire inside her. The rules don’t provide a framework for a shared win, but that’s what it felt like to us, creating a story that made sense and gave us equal closure.

I don’t know when, if ever, we’ll play another round of Dead Friend. It was intense, and we both mentioned that it’s not something we could casually play with many people in our lives. I’m really glad we did, though. It was probably the most intimate tabletop experience I’ve had to date. Grappling with love, loss, and regret together was a lot, but I feel more prepared to handle it as it comes up in real life thanks to the experience.