Exercising Mediocrity: Playing Skate 3 as Myself 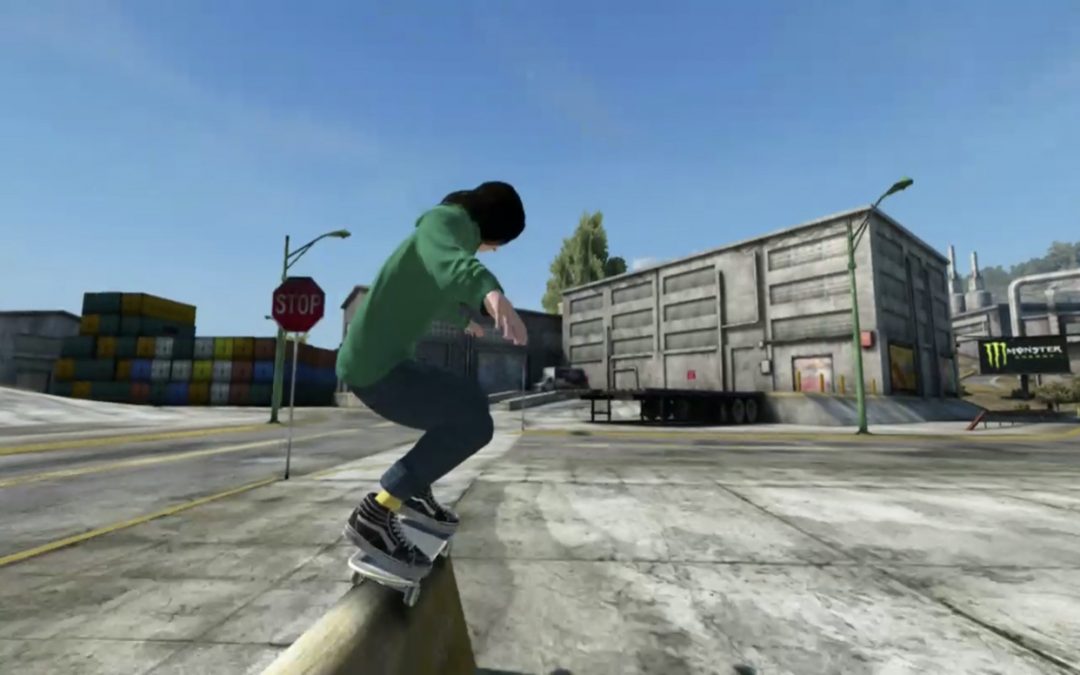 I can kickflip in real life. I can also ollie down a five-stair. What I can’t do is kickflip down a five-stair! Every time I’ve given it a go, it has always ended with some part of my body bloodied and/or scraped after an all-too-personal meeting with the pavement. Falling is a big part of skateboarding, and learning how to fall is one of the most important aspects of ensuring that your time with skateboarding is longer rather than shorter. Skateboarding is an exercise in pushing against gravity with concrete and metal. The concrete and metal always win, but sometimes a skater can work with them to cheat gravity and land a trick—an endeavor that can often feel like a war of attrition; small steps towards progress that are punctuated by often hard slams. Through accepting that one’s body can only take so much punishment and the humbling fact that most of us will never go pro, we must accept our boundaries. 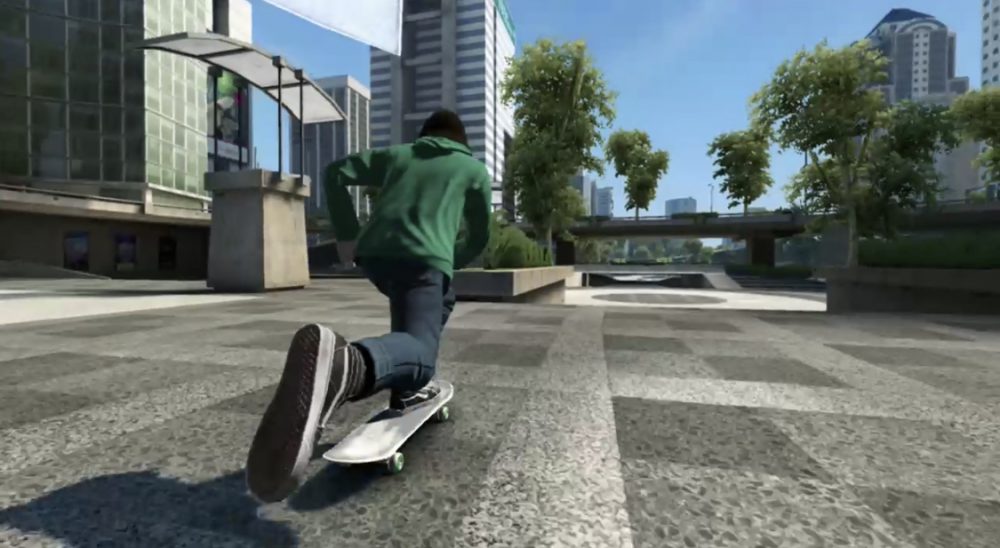 Skateboarding in video games has always been a power fantasy where players can throw limitations onto the ground and quadruple kickflip over them. The Tony Hawk’s Pro Skater series is a series of power fantasies built on the titillation of raking up a higher and higher combo score. They are fun, and the power fantasy speaks to the heart of skateboarding—breaking boundaries and viewing everyday environments as puzzles to create the coolest line is, more or less, some of what skateboarding is all about. But the Skate series serves as something different. The trilogy is built on a loose facsimile of realism centered around a realistic physics system, and through an input mode meant to resemble (somewhat) how feet flick on a board to initiate tricks. But that realism is hardly anything at all. The Skate series—Skate 3 specifically—allows players to do unrealistically long lines, heavy gravity-defying tricks, and more. It might look like skateboarding but it does not feel like skateboarding.

Skateboarding is an incredibly personal sport, as a lot of its biggest hurdles are mental. Psyching oneself up to try a new trick or ride into a spot that has hurt you time in and time out is, for me, half the fun of the sport. You learn how to talk to yourself, how to set boundaries, and how to constrain your imagination in the name of safeguarding your body. Skate 3 has no body, no grounded state. If your character falls, they just respawn. So, why constrain yourself? Just throw your virtual self down the biggest hill, and if you fall, just do it again.

That method of play just does not appeal to me. Instead, I’ve turned Skate 3 into an exercise in trying to recreate my personal skateboarding skills in order to see how they translate to the skateparks, sidewalks, and business districts of the game’s open-world. Constraining player input into precisely what tricks I can do in real life has turned Skate 3 into an incredibly cathartic experience for me. A power fantasy humbled into a mediocrity simulator, oddly enough, allow me to engage with the world and player inputs in Skate 3 through a personal lens. Rather than skating for a high score, I can skate for myself, as myself. For example, I could use a normal street curb in Skate 3 to do any combination of multiple trick lines (i.e. a manual into a nollie up onto the curb into a nose manual), but in real life I cannot do, like, 75% of the game’s available combos. Instead, I look at the curb like I would in reality. I ride into the curb and ollie into it, engage in a quick boardslide, and ride out. It is a simple one-two of a trick and only lasts for a few seconds, and those few seconds are anything but flashy. But just like in real life, those few seconds are stretched out into a prolonged blissful feeling of accomplishment. I know my limits and I constrain myself to them so that those small tricks and weird landings always feel monumental. 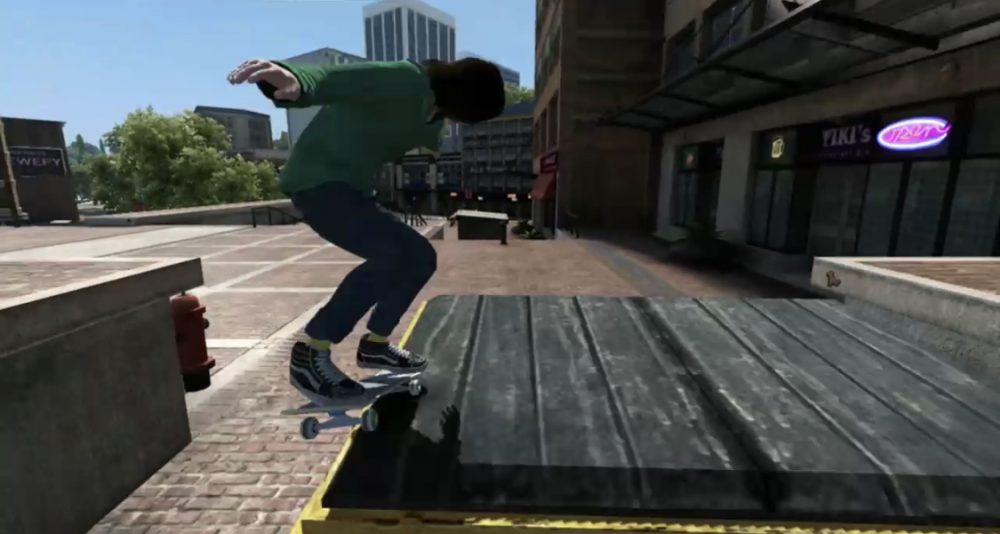 A personalized perspective on digital spaces allows the player to look at every pixel through a lens that grounds the fantasy in the real. To make the world of Skate 3 work under the constrained circumstances of my skateboarding abilities means that, on a fundamental level, I won’t interact with a vast majority of the game world—no X-Games ramps or monster hills for me. My skater glides across streets and onto curbs, ollies down smaller staircases, and sticks to the less-sketchy parts of the game’s few skateparks. The world has been funneled into a specific set of areas that meet my abilities, and from there my skater exploits every nook and cranny of the environment in order to land a trick. Maybe I can’t ollie high enough to grind that rail, but I can definitely hippie jump it.

Finding answers to unasked problems is another huge part of skateboarding. If a set of stairs can exist as a problem, then it is up to the skater to figure out how to solve it. Whether that be kickflipping down it or simply firecrackering it, as long as the skater rolls clear of the stairs, then the problem has been solved. But that solution is specific to every skater. So, I treat every object in Skate 3 as a “problem” posed directly to me. I’m not skilled enough to find many of the solutions that other skaters have, but with some creativity and the understanding of my own limits on the board, my virtual self can solve almost any “problem” in the game. Everyone can play Skate 3 as a gravity-defying, combo-chasing maestro, but only I can play it as the flawed, frustratingly mediocre skateboarder that I am. And doing so is a damn good time.

Cole Henry works as a copywriter by day and writes about games by day, too, or night, or whenever he gets the chance to do so, really. He still plays way too much  Skate 3 and Tony Hawk’s Pro Skater 3. He can be found on Twitter @colehenry19.