The Katamari is Full of Nightmares, Actually 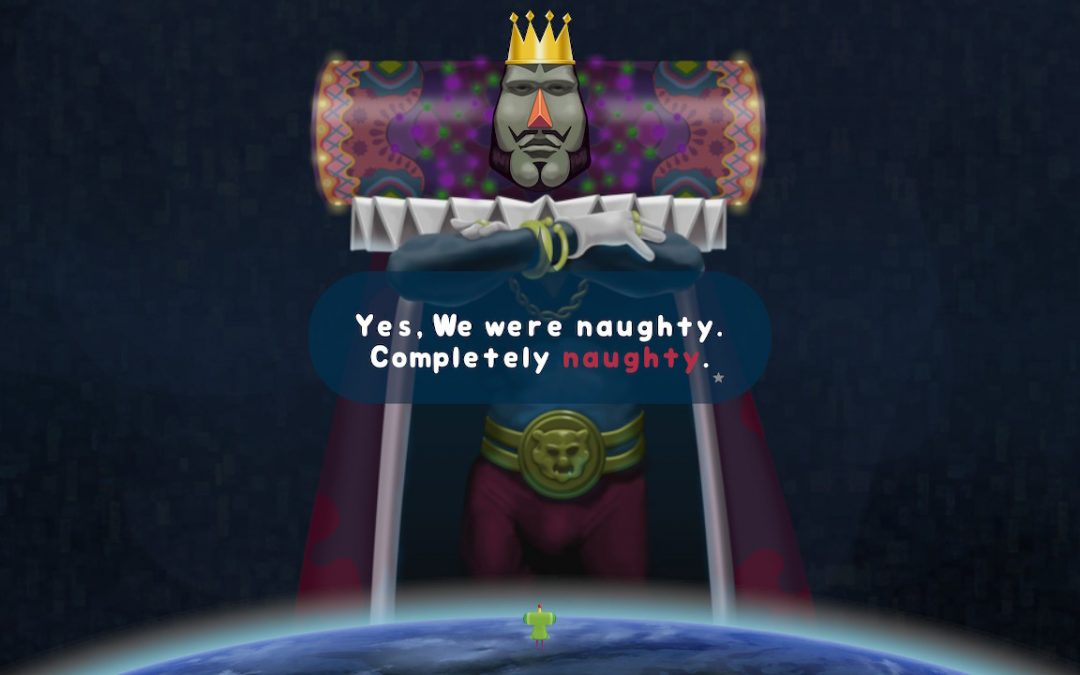 An ominous figure looms. You are small, weak and helpless, bound to the whims of the powerful. Is it a movie? No. A nightmare? No. The crappy job you hate but need to survive? Still no.

It is a game—not one about choice, but one about doing what you’re told in order to atone for the sins of the previous generation. It’s a game about the existential terror of trying to live up to unattainable expectations and the failure of missing them.

I’m talking, of course, about Katamari Damacy, a game that packages many of my personal nightmares in a cheerful, adorable world.

A powerful person exploiting the labor of those who are socially and economically under their power? Check. That same person dangling rewards to low-level employees, only to yank them away at the last moment? Check.

Katamari Damacy, released in 2004, is a game designed to be easily understood and enjoyed by audiences of all ages. At the beginning of the game, the Prince (the player character) is given a mission by the King of All Cosmos: Use the katamari to restore the stars to the sky, because the King of All Cosmos knocked them down during a night of binge drinking.

In Katamari Damacy, the goal is to roll over and collect as many objects as possible until the katamari reaches the requisite size. The objects range from small to large, mundane to unexpected. Dice, pushpins, crabs, lipsticks, crayons, caramels, matches… every level has dozens of items arranged to turn the landscape into a kaleidoscope of color. One by one the Prince catches those items in the katamari, and once you have homogenized the landscape and removed the things that made it unique, the King of All Cosmos sends this giant ball of things into space to replace a star. After each level, the game cuts to a shot of a family cheering for the stars’ return. Perhaps they are oblivious to the callous actions that caused the stars to fall in the first place. Perhaps they do not recognize the labor and sacrifices that went into each star, or perhaps they simply do not care.

Did Keita Takahashi know what he prophesied when he conceptualized the original Katamari Damacy in 2004? Does he realize that fifteen years later this game is just barely a work of fiction? Does he?

Because there are no two ways about it: The Prince lives in a world of abject horror, not dissimilar to our own. Beneath the game’s bright colors, adorably blocky animals, and unflaggingly cheerful soundtrack, I recognize his quiet desperation. Katamari is also a game that speaks so specifically to millennial anxieties that when I thought about this I laughed uncontrollably and then had to lie down on the floor and take a minute.

The Prince is a beacon of and for our times. Not only is he atoning for sins of the previous generation by constantly cleaning up someone else’s mess (the King of All Cosmos, who is a pretty terrible father), he’s caught up in the gig economy. What nightmare-scape does this world exist in if even royalty is caught up in the gig economy? I didn’t think that was supposed to happen to rich people. 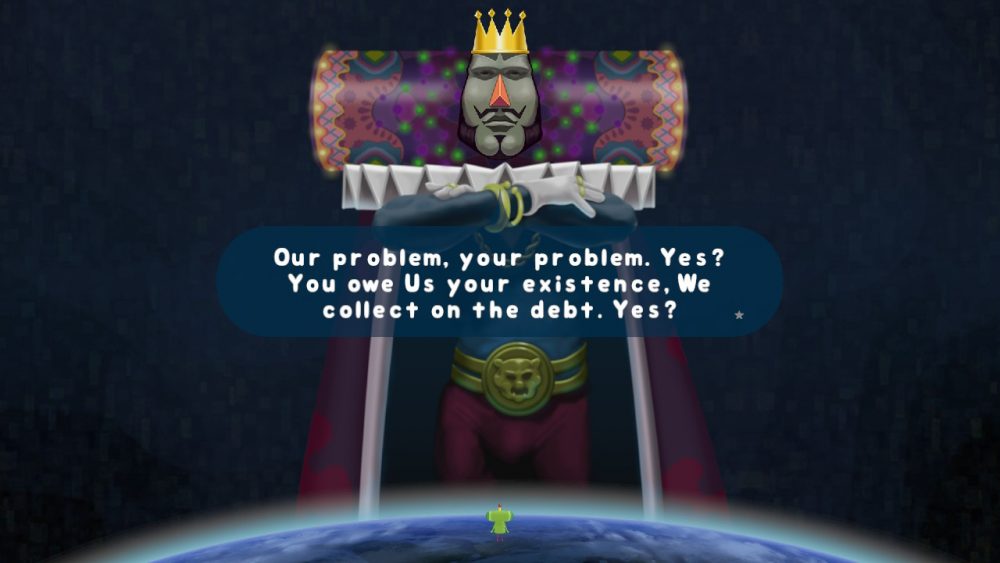 To be confronted with a seemingly insurmountable problem and work tirelessly to overcome it is simply the condition of our younger workforce. The Prince is just doing his best, even if his best involves rolling up living human beings into a fifteen-meter trash ball and throwing them to their death in the cold void of space.

Logistics of wealth aside, you know what part of this game breaks me, every single time? The part where, if you fail to roll your katamari to the requisite size, the King of All Cosmos stands menacingly over the Prince and tells him he’ll never be good enough while the Prince cries the salty, salty tears of inadequacy we have all cried in the work bathroom at one time or another. It’s devastating.

Did Keita Takahashi set out to make a horror game? Certainly not, or at least not in the way that we traditionally think about horror. According to a GDC talk later transcribed by Gamasutra, Takahashi’s intent with Katamari was to make a game about the rampant consumerism in modern society. I think the theme of consumerism takes on new meaning now, especially in the wake of the tech boom of the early and mid-2010s. In the United States, this period saw the aggressive expansion of social media platforms like Facebook and Instagram and the early stages of companies like Airbnb, Uber, and DoorDash. It also saw cities granting tax breaks to corporations at the expense of residents and the cost of living spiking astronomically. San Francisco, where home prices have shot up 95% since 2010, is perhaps the most notorious example. To be clear, these aren’t isolated incidents or coincidences: Rents and home prices have risen in conjunction with the arrival of tech companies.

In Katamari, it doesn’t really matter what you roll up; if the katamari is big enough to grab a person, it will. In real life, the increased cost of living drives residents from their homes and into the suburbs. The displacement is less flashy than getting tossed into the cold void of space by a 100-foot-tall god, but it’s there all the same. Of course, the homogeneous landscapes of gentrified cities are a result of years’ worth of standardized architecture and not a giant magic ball rolling around chaotically for three minutes. Though Katamari Damacy may have begun as a metaphor for consumerism, it works just as well now as a metaphor for corporate greed. The Prince may just be working for fantasy Elon Musk, but he is also complicit. Who isn’t? There is no ethical consumption under capitalism. We’re all complicit.

None of this is to say that I dislike Katamari—quite the opposite. What I’m saying is that it’s chilling to see my existential dread gamified; real-world anxieties are all the more horrifying when they’re so adorable.

Although at least it’s gamified in like, a fun way?