Greenlight This, You Cowards: Queer Dungeoneers is My Dream Cartoon 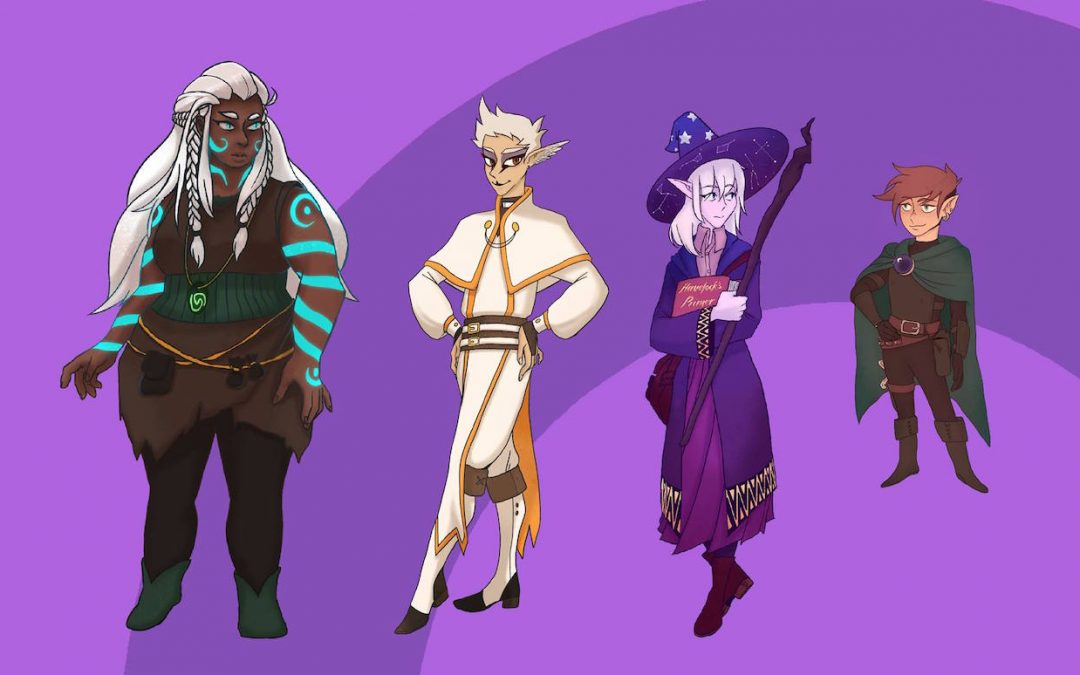 Welcome back to Greenlight This, You Cowards! A series about TTRPG podcasts we love and media adaptations that we want. In the first installment, I pitched the wonderful Dames & Dragons as a dating sim. Now, in this harrowing time of pandemic, I have been turning to these podcasts for a bit of much-needed escapism. The wilder and more outrageous the podcast, the better the distraction, and no podcast keeps listeners on their toes like Queer Dungeoneers—which is why I think it would make a perfect Avatar: the Last Airbender-style fantasy cartoon! 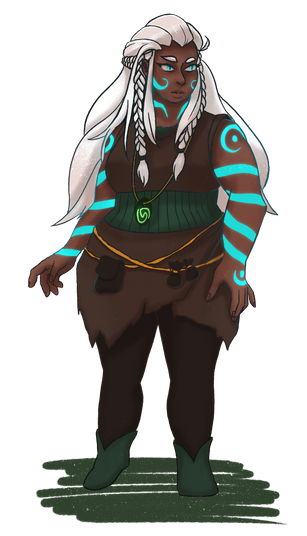 Queer Dungeoneers is a Dungeon World actual-play podcast based in Australia. When the story opens, Nimay, a human druid from Mistbank, has left her home to discover what’s been stopping the flow of water into her village. Upon learning that an organization called the Joses Facility has created a dam that’s harming her people, she recruits a motley crew of adventurers to destroy it. Kremora Magnus, an Elven wizard who’s totally not spooky at all, Jolene Jolyne, a halfling rogue with sticky fingers and a love of stabbing, and Cygnana Cacklecast, an Elven bard who mysteriously knows a lot about swans but little else, answer her call.

After taking care of the dam situation in the most chaotic way possible, Kremora and Jolene decide to accompany Nim on her journey back to Mistbank—Kremora because she’s totally innocently interested in Mistbank being a place of power, and Jolene because—well, Jolene seems interested in going anywhere with interesting things to steal. In a frustrating twist for Nim, all is not hunky-dory in Mistbank. Pip, the village leader and Nim’s mentor, has vanished, leaving behind a fraught political situation. Tracking her down leads the party to Mount Pleasant, the place of power Kremora was seeking, but also to a scary, giant stone wurm, a scaly surprise for Jolene, and one other tiny problem: an impending apocalypse instigated by a god. Even a disorganized crew of disaster queers can’t ignore an apocalypse.

Oh, and if you miss Cygnana, don’t worry! The group will never be rid of him, even if they really wish he’d leave. In fact, it’s this unlikely bond that first ties Queer Dungeoneers to fantasy adventure cartoons like Last Airbender. The coming-together of an adventuring group is a bit of a trope in TTRPGs and epic fantasy cartoons. Whether it’s a note on a message board posted by a desperate druid, a young prince stumbling across a glowing egg and a shadowy elf assassin, or a girl accidentally waterbending a young boy out of an iceberg, the characters always seem to meet by chance. Viewers who love cartoons like The Dragon Prince and Avatar: the Last Airbender are already prepped to jump into a story like Queer Dungeoneers. Of course, the cohesion of a crew of wacky strangers will be the last thing a viewer could possibly predict in this wild story.

The most important connecting piece between Queer Dungeoneers and fantasy cartoons is humor. While Queer Dungeoneers never shies away from lore-heavy, emotional plot lines, humor is its true heart. It’s clear from the get-go that GM Sammy has gathered a group of friends who have been playing with for a long time, and none of them are shy about wreaking havoc when it seems fun. In fact, if you’re looking for a Queer Dungeoneers drinking game, I suggest taking a drink every time Sammy goes, “um… OK!” and then laughs out of shock at someone’s outrageous decision.

Nim (played by Ursula) is especially interested in wild, showy solutions to problems. I’ve never played Dungeon World, but druids, at least in Sammy’s version, have nigh-unlimited wildshape (animal transformation) options. However, each time the druid uses wildshape they get a certain number of hold depending on how well the player rolls to transform. Hold works a lot like spell slots, and druids can spend hold to use abilities innate to the creature they’ve transformed into. Once the druid has spent all their hold, they return to their original form. Ursula is an expert at spending hold, however mundane, to cause as much chaos as possible.

It’s Nim’s rowdy use of her abilities that made me decide the perfect adaption for Queer Dungeoneers was an Avatar: the Last Airbender or Dragon Prince-style fantasy cartoon. Picture this: the Queer Dungeoneers crew is outside the Joses Facility, ready to destroy the dam inhibiting water flow to Nim’s village. They need to get inside, but need a distraction to get past the guards. Valiantly, Nim decides to be that distraction. She steps forward, tells her friends to “just go for it,” and then falls forward… into the shape of a cow. In response, Cygnana whispers to Jolene Joleyne, “See, I told you the Vengeful Hag of the River [Nim] is also a bit of a cow.” Now, imagine that animated—Nim stepping forward with great bravado to turn into a cow and moo at the guards! Cut to Cygnana, cracking a joke! And then, heist! Sounds like an episode of Avatar to me.

Humor shared among friends is also an important driving force of Dragon Prince and Avatar: the Last Airbender. Sokka initially seemed to fulfill the role of comic relief, but as the series progressed it became clear that any character could jump into that role. It was the group’s interactions that were meant to make the audience laugh. The characters each took turns roping the others into harebrained schemes, like taking on terrible, hilarious personas like “Sapphire Fire” in order to sneak through a Fire Nation village or, in the case of Queer Dungeoneers, using pointy sticks to mimic ears to pretend to be an elf.

The cow moment in the beginning of the podcast is not a one-off; the players and characters of Queer Dungeoneers also embrace bad puns and silly, low-blow jokes. During an episode much further into the first arc’s plot, Nim finds herself in a precarious situation in which she may lose her hand—and the entire party jumps in at various points to make “do you need a hand?” style puns. Separately, Tori, who plays Jolene, has created a running gag through the series in which Jolene—who has four names that are all some spelling variation of “Jolene”—lies about her name or steals other characters’. Kremora is the first victim, and honestly, we all deserve an animated visual of Kremora’s face when she hears a strange being shout her name—only for Jolene to answer.

While the humor heavily influences the tone of the story, it’s the creative nature of the magic in Queer Dungeoneers that would make it an visually stunning cartoon. Nim eventually gains the ability to change into elementals in addition to animals. These transformations could be beautifully animated, just as the use of elemental magic in both Last Airbender and Dragon Prince was. In a crucial moment further into the first story arc, Nim faces down a “wind vortex of doom,” which takes strange forms—several arms made of wind, a face, and eventually a person. 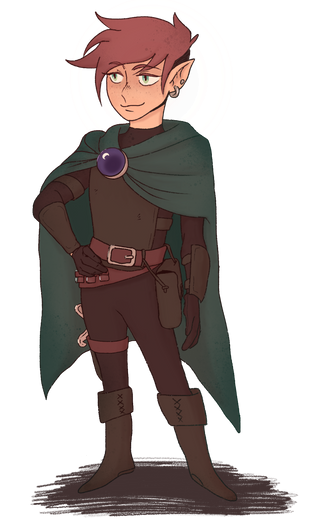 Shortly after, Cygnana, who is fighting a separate battle with Jolene, uses a goofy item to elongate his own body to catch the wind, creating a weird mental image of Cygnana-as-sail. This wild manipulation of physical forms is reminiscent of how elves in The Dragon Prince can shift their arms into wings, or become nigh-invisible shadow creatures under the light of the moon. While the transformations in Queer Dungeoneers are often goofy or macabre instead of elegant—Cygnana in particular opts to go through some wild bodily changes, and Kremora, mysteriously, can animate dead creatures into useful but grotesque zombies—they’d still be fabulous to see animated in a similar style.

GM Sammy is also a master of weird and graphic descriptions, aided frequently by Jarryd, who plays Cygnana. Jarryd often puts his character in the strangest and most twisted situations possible. The pair has created settings and creatures that would be a delight and a horror to see animated. When the party finally faces the giant wurm, the podcast describes an image like “those peely cheeses you can get, but full of death.” Later, as the group digs deeper into their world’s lore, they discover that Meldis, the goddess of invention, created strange creatures called clonkwonks, which allowed her to work around the barrier separating the gods from the world of mortals, and assert her will. There’s a bit of a god-level turf battle around the clonkwonks, and as they feature more in the plot, the players take up a running joke in which various characters give them sillier and sillier names. The changing descriptions of these beings leaves a lot open to artistic interpretation and a lot of room for possible visual gags. A Queer Dungeoneers cartoon could take inspiration from FLCL and swap out artists for different episodes to actually change the look of the clonkwonks as the story evolves.

While its story is built on a foundation of carefully crafted lore, at its heart Queer Dungeoneers is a hilarious, wild romp. I can think of no better inspiration for the next big fantasy cartoon, and some minor tweaks could even make it appropriate for kids. Whichever network decides to option the podcast for an animated series can email me about a finder’s fee. Have fun and listen to the Queer Dungeoneers!

Read the rest of the Greenlight This, You Cowards series.