9 Stinky Mobile Games To Turn Your Brain Off During Quarantine 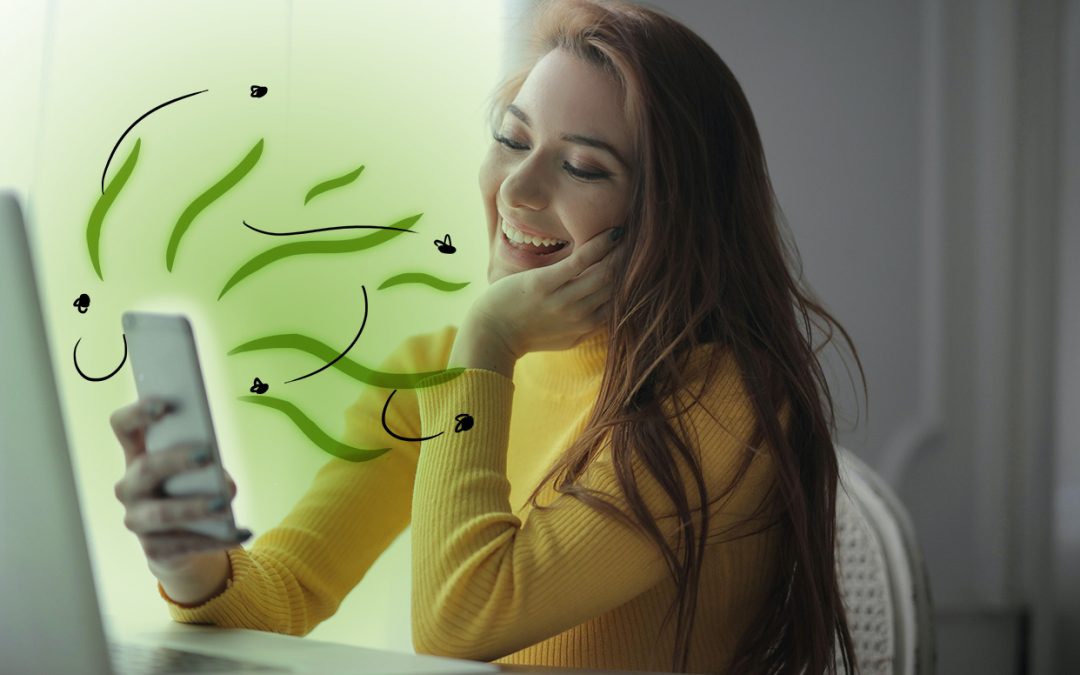 Every few months I go through a period of abstaining from Twitter, and right now, stuck in quarantine in a political climate that feels like watching an asteroid hurtling toward Earth, is as good a time to be off the bird site as any. But like all of us, I have a love-hate relationship with being on my phone, and there are only so many Instagram posts to look at. Look at enough, and you’ll start to get served some very interesting ads—ads that claim the Demon Brothers can’t wait to meet you, ads that suggest you can save a man and his wife from freezing to death, ads that suggest you’re legally skilled if you can make it to Japan.

Spend enough time looking at them and these ads become increasingly appealing. But this isn’t my first time at the rodeo, and I know what I like. It’s garbage. I like vapid, consumable trash that I play fervently for three days and then abandon forever. You can’t reach pink color? I’m going to reach pink color, dammit. You destroy your ex? I’m going to destroy your ex too.

And this is how I end up with my storage full—because I download every janky-ass, ugly mobile game advertised to me for free on Instagram. And I’ve downloaded a lot in the past month and a half. Most of them direct from trashy Instagram ads, the rest from ads within the games advertised in trashy Instagram ads. So here they are, ranked by stinkiness. 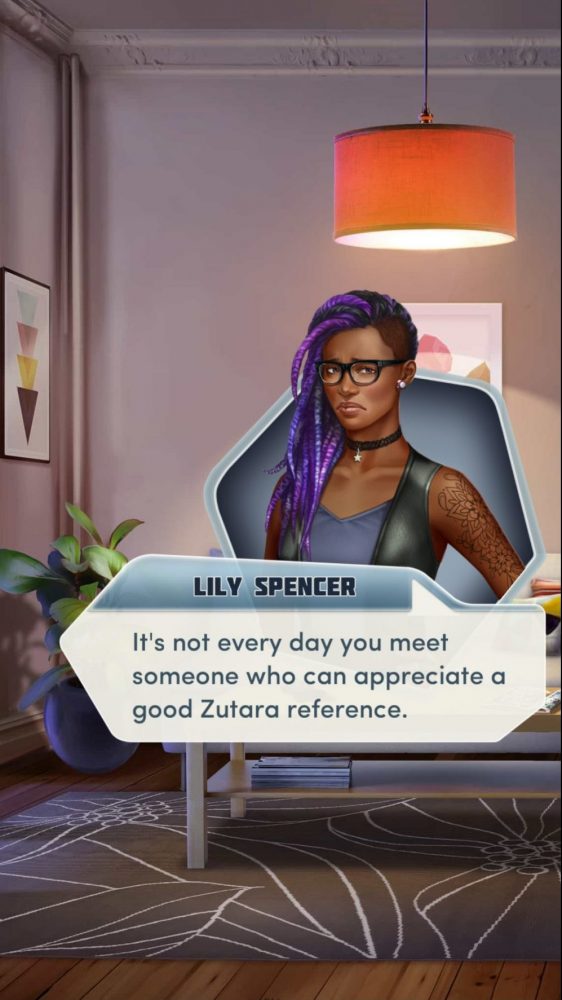 I actually downloaded Choices ages ago, but I’ve returned to it now in my time of greatest need. Choices is one of those “You Choose the Story” apps where the ads are always packed full of wild scenarios, like catching your boyfriend cheating while you spy from the closet or deciding whether you will fall in love with your hot vampire roommate or your hot vampire boss.

I’m playing the latter story—it’s called “Blood Bound”—and it’s clever and fun and trashy in all the best ways. Weird ads aside, Pixelberry’s writing team has chops, and each one of the stories I’ve played through have been charming and remarkably inclusive. Give them a shot!

Robinhood is actually a stock market app, which is kind of like a game if you are wealthy beyond my comprehension and can do things beyond the ken of most folks, such as “take risks” and “spend money to make money.” But Robinhood offers free stocks when you share the app, so my cousin sent me one, and then I sent one to my husband, and added exactly one dollar to my account.

I’m extremely averse to gambling, and the stock market feels an awful lot like gambling. However, two free stocks and one purchased for less than a dollar is now worth around $20, which certainly isn’t enough to retire on but will allow me to buy a book or bubble tea and pastry or really good sandwich when it’s okay to go out again.

Smells Like: Money fresh out of the ATM; papery, but sour.

I love word games, and the ads for CodyCross were of that infuriating genre where it’s obvious what words you can fill in but the advertisement features someone absolutely incompetent playing. Naturally, I had to download it to ease my frustration.

There’s some kind of theming about wholesome aliens, but I’m not here for the story. I’m here to dominate the word game. However, the word game is so fantastically easy that dominating it provides no satisfaction whatsoever. You’re given a number of spaces and a clue, and must fill in the spaces with the proper word. If successful, you’ll unlock other letters in other words, making each puzzle progressively easier. It gets less fun the longer you play it, but at least it isn’t riddled with obnoxious ads.

Once again, I was drawn in by the advertisement showing me someone doing an absolutely piss-poor job at Bingo. “I can do better than that,” I thought, and downloaded Bingo Story, despite never having enjoyed a single game of Bingo in my entire life.

It’s a Bingo game. But apparently there are more mechanics that the game has neglected to tell me about, because in the in-game chat I see people asking for crumbs, candy canes, stones, bones, and houses. I have no idea what any of this means. All I have done is play several rounds of Bingo that have all the color and flashiness of a slot machine and begin to wonder what I’m doing with my life, and why quarantine seems to have turned me into a person who willingly plays Bingo.

Smells Like: The desperation of a pine tree air freshener in a car driven by a long-time smoker.

Park of Monster is your average merge game. I think? I haven’t actually played any other merge game, and the only reason I downloaded this one is that there were monsters in it, which is more appealing to me than dragons or fairy tale creatures or whatever else is going on in the genre.

I’d explain how you play the game, but to be honest, I don’t know. It seems to be poorly translated from a different language, I can’t find any kind of codex or explanation of the different objects, and I feel like I must be doing something wrong because I’ve reached a point where everything takes so long to accomplish that it’s not fun anymore. Was it ever fun? I don’t know. But sliding objects together to make larger objects sure is satisfying.

Smells Like: A cheap vanilla-scented candle that gives you a headache if you burn it too long. 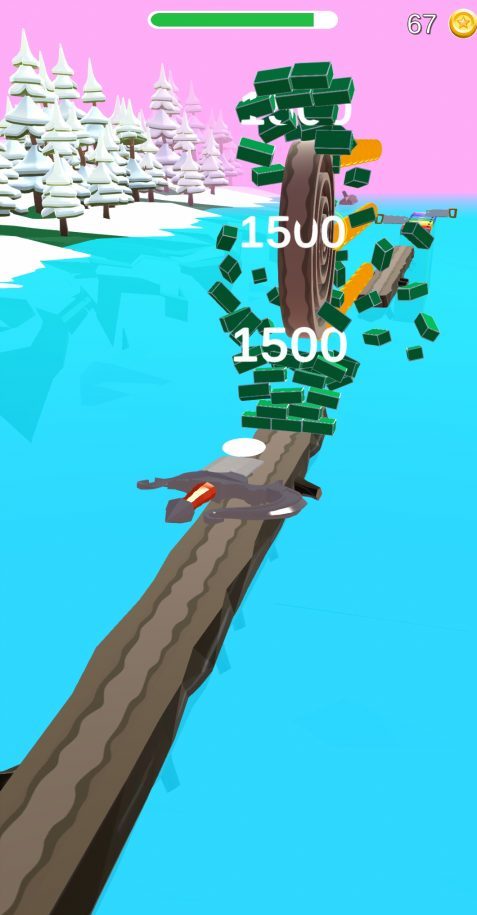 We’re now reaching the point of this list where the games are less “this looks fun,” and more, “haha what the actual fuck is this?”

In Spiral Roll, you play as a screwdriver (?) used to peel off an increasingly large bit of bark from wood, like unrealistic whittling. This wood spiral collects coins for you or removes obstacles. It goes on seemingly forever, with only a few changes. It isn’t fun, but I did spend about 20 minutes in bed playing it for no other reason than that I didn’t want to get out of bed.

In Join & Clash, you play as one little minimalist dude collecting other minimalist dudes as you run through extremely easy obstacles before attacking a giant person and taking their castle. The ad led me to believe there would be some degree of skill involved, but this game is so appallingly easy that it lacks any fun whatsoever.

Still, I like seeing their little dance at the end. It feels very… meme-y in a way I don’t want to think about too deeply, like at some point the game is going to reward my success with “EPIC LULZ,” but for now I’ll just appreciate their dorky little dance for what it is.

Smells Like: Axe body spray in a locker room. 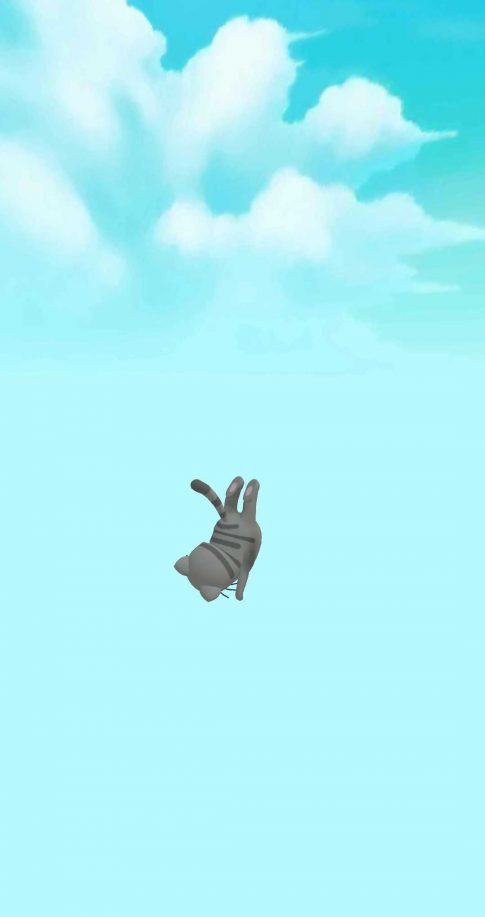 On its surface, Aquapark.io is a racing game that takes place in a waterslide. In reality, it’s a study in absurdity. There’s no point in actually trying to race. Instead, slide yourself right out of the half pipe and drift slowly down toward the next stage of the waterslide, or settle into the ground as you gently lose. It’s less about racing and more about trying to float as close to the bottom as possible.

Though the game makes it look as though you’re playing alongside real people, I see nothing that suggests that’s true; they teleport beside you on the map, no matter how far down the slide you’ve drifted. It’s nonsense, it’s not very fun, but I managed to spectacularly break it in such a way that it looked like a sad, lonely version of the “Leap of Faith” scene from Spider-Man: Into the Spider-Verse, which is pretty funny.

1. Whatever Game I Deleted Because My Storage Was Full (Brain Out)

I recalled, upon pitching this piece, that there was a game that kicked off this miniature obsession. Some game that was so egregious in its advertising that I ended up with all these others and completely abandoned it. Actually, I had to delete it from my phone, which is so cluttered with podcasts that I had to start deleting stinky mobile games to make room for new stinky mobile games.

Thankfully, the Google Play store came to my rescue with a record of every shitty mobile game I’ve ever downloaded on this phone. It’s bad, folks. But I am now able to review the game that started this particular bout of nonsense—the game so bad, so stinky, that I apparently wiped it from my memory.

That game is Brain Out.

Ostensibly a game of tricky brain teasers that have you counting hairs by sliding away a graphic hiding the actual number of hairs (this is a real example), Brain Out was fun for a handful of levels until it became clear that, between what seems to be some subpar translation and nonsense puzzles, it’s a hot mess. Like, not a fun mess—some of the puzzles honestly don’t make sense, and the “hint” system actually just gives you the answer most of the time. It’s also chock full of advertisements, and I spent more time watching ads for things like Aquapark.io and Spiral Roll than I did actually playing.

Smells Like: That time my coworker left some sort of cauliflower dish in the office fridge for lunch and forgot about, and I came in first thing in the morning to an overbearing stench of rotten eggs and wondered for a moment whether I ought to call the gas company to fix a leak.