5 Low-Prep, GMless Games to Play from Far Away 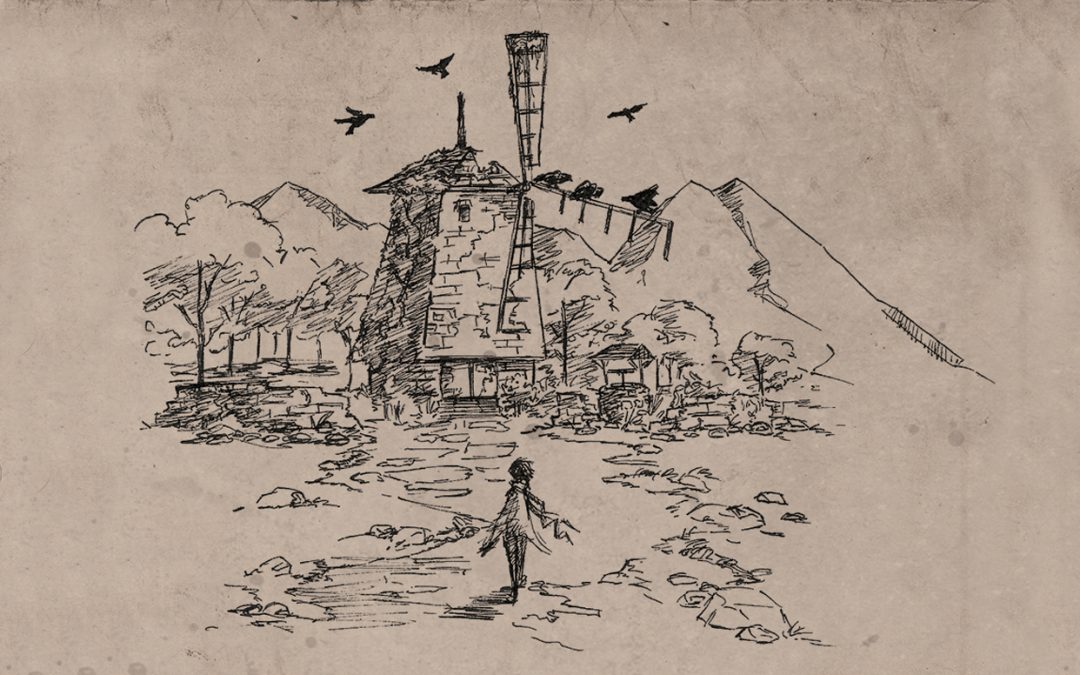 Welcome to the quarantimes. All across the land, folks are starting remote D&D games in an effort to find something to do with their distant friends, and you’re starting to think a tabletop RPG sounds like fun, too. But wait! You don’t have a friend you can easily designate as DM (or GM, as the case may be), and you certainly don’t want to put in that kind of planning time.

Well, good news: You don’t always need a GM to play TTRPGs. I love telling stories with my friends, but I’ve never in my life been able to commit to GMing… so I’ve built up a stable of GM-less games that I can pull out and play with zero prep.

GMless games are RPGs without Game Masters. In them, all the players shoulder some of the work of moving the story along—unlike in D&D, it’s the players’ job to introduce twists, turns, and conflict into the story. Almost all of them are prep-less, which means that nobody has homework before you start playing, and many of them are fairly straightforward rules-wise so they’re quick to learn and pick up.

The following are a few of my favorite GMless games. They all work remotely, and a lot of them even have modules in Roll20 that do a lot of the setup for you. Read on!

Ah, right. Roll20 is an online platform for remote RPG play. Creating and entering a “game” in Roll20 gives you access to a collaborative canvas that you and your friends can draw or move tokens around on. It has really rudimentary drawing tools, dice rolling capabilities, and a way to create custom decks of cards and character sheets.

I’m not gonna lie—it’s janky and there’s a rough learning curve. But some incredibly skilled people have put together pre-built tools that you can load in as “modules” on the game creation screen, which then make it way easier to play card-based games or other games with specific materials remotely. There are even pretty decent native video and audio chat capabilities in the game player, which are great if you get overwhelmed by having to track seven different windows at once. 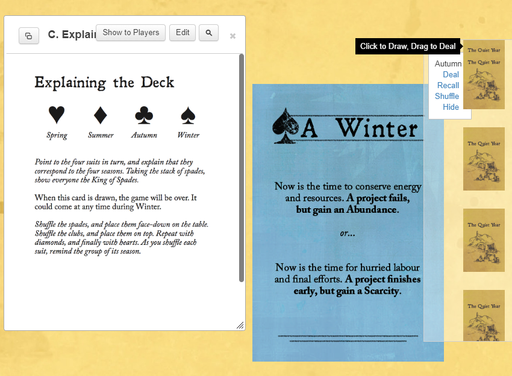 In The Quiet Year, you and your friends tell the story of a small community as it rebuilds over the course of a single, quiet year. Now, this year might not actually be all that quiet, and it probably won’t make it quite all the way to a full year. Players don’t have their own characters—rather, everyone takes turns drawing cards (one for every week of the year, starting at the beginning of spring), responding to their prompts, and adding to a collaborative map. Each card will help you discover things about your community or introduce new twists or events. Eventually, once you’ve made it to winter, someone will draw the king of spades and the game will end as the Frost Shepherds arrive.

The Quiet Year is maybe my favorite game of all time. It’s a great game for new TTRPG players—the cards-and-prompts system provides a sort of scaffolding that makes roleplaying and storytelling less intimidating—but it doesn’t get any less interesting if you have more experience. It’s fairly setting-agnostic, as long as your community is small and starts out isolated, and it’s free enough in its parameters that things can get weird. The rules are simple enough that I think the right kids could get the hang of it fairly quickly, too.

The Quiet Year claims it takes 2–4 hours to play, but the shortest game I’ve ever played was 3.5 hours long, and we were playing with about 30% of the cards taken out of the deck. But maybe you talk less than I do! You can find the Roll20 module here, and you can find the PDF or physical copies at Avery Alder’s storefront. 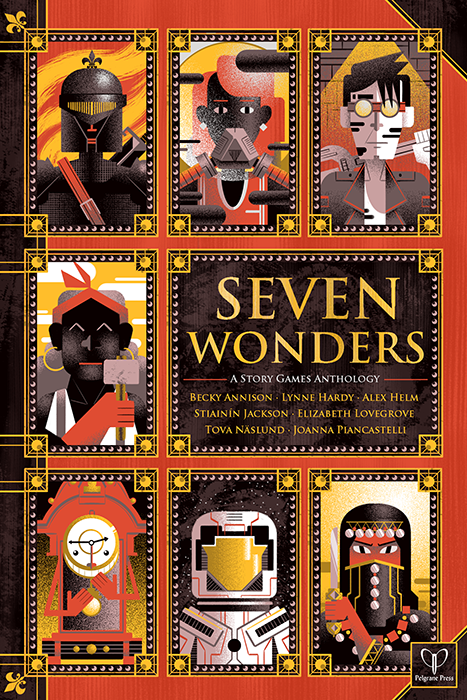 Heroes of the Hearth

What happens to the people the heroes have left behind?

In Heroes of the Hearth, you play as the folks who didn’t go on the heroic journey. Each player plays a character who has an important relationship to a hero—a sibling, a lover, a friend, or even a rival. Play has three acts in which the characters deal with the absence of their heroes, brace for the threat that the heroes have gone off to face, and just continue living their lives. Between each act, players exchange letters with their hero; after the final act, they must reckon with the threat.

No Roll20 module for this one, but all you need to play are the rules and a way to write down information about your character. Get the Seven Wonders PDF here (you can get just the PDF by scrolling down in the menus). 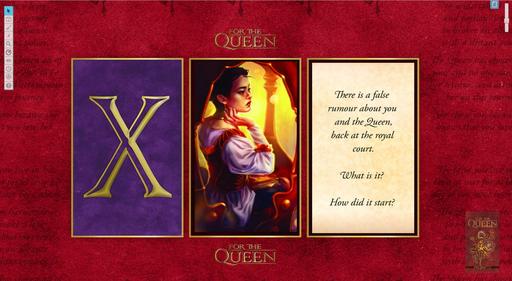 For the Queen is an extremely lightweight card-based storytelling game. All you need is the deck of cards, and all the rules are printed on two or three cards in the deck. Each player plays a character, and you build that character by responding to the questions on the cards you draw. Play is collaborative, sort of—players just answer questions as the game progresses, and eventually they will each have to choose: When the Queen is under attack, do they defend her?

The only way to play this game without a physical copy is via the Roll20 module! Get that here. 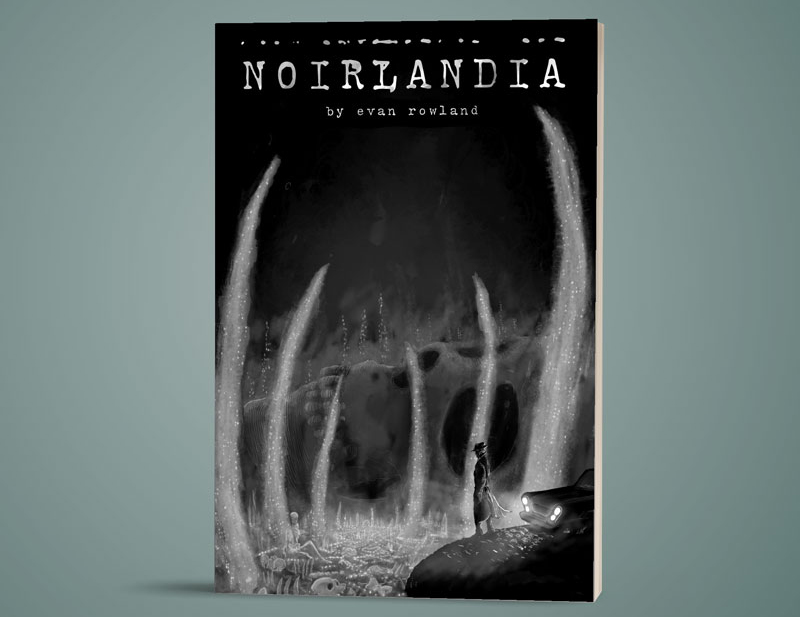 Noirlandia is a game about having a really bad time solving a murder. I learned about it because I went to a panel about “unwinnable” games at PAX Unplugged, then sniffed out one of the speakers in the Dealer’s Hall because I couldn’t stop thinking about the game she had described… and then immediately got distracted by Noirlandia, which was sort of its edgy younger cousin. Players each play their own character, and each player has “ownership” over some aspect of the setting. So if I “own” the architecture, I would answer any questions that came up about what buildings look like or how we move through them.

The characters all have relationships with each other, glancing or more intimate, and the players collaboratively tell the story of the characters trying to figure out the murder that is central to the story. There’s no right answer, but the game itself is a ticking clock: as characters encounter challenges and roll dice, their adventure takes a toll on them and they struggle to keep going. If the characters give up or give out before they have enough information to solve the mystery, the game ends and the mystery goes unsolved.

There’s no Roll20 module for this one, but you can get the PDF here. 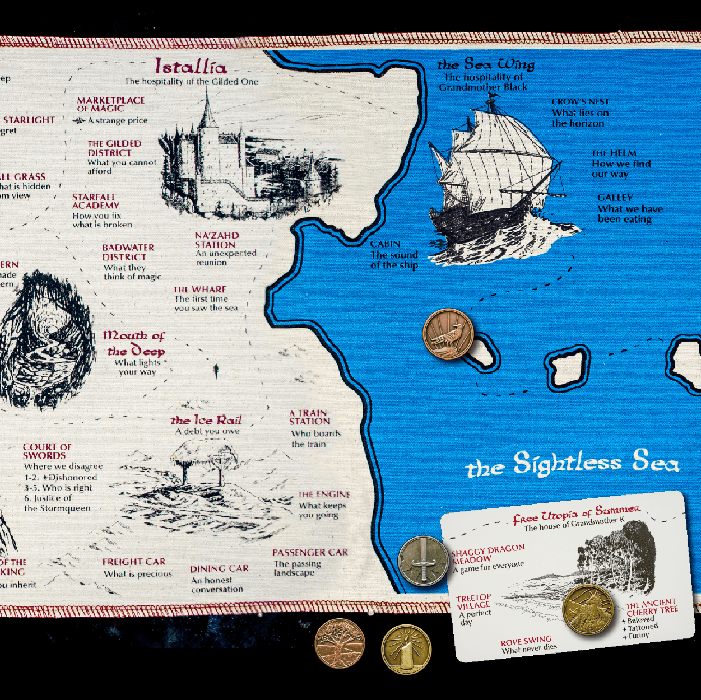 Fall of Magic might be the most beautiful game I’ve ever played. The physical version is screen printed onto a cloth scroll, but even without the hand printing, the map itself and the stories that the game conjures are gorgeous.

In Fall of Magic, magic is dying, and so is the Magus. Each player plays a character in the Magus’s party as they journey across the land in an effort to save magic—or at least figure out why it’s going away. Players build their characters by choosing a title and origin from a list, and then by giving their scrap of character a name. They then step through the map, choosing where to go and narrating or playing short scenes with other players based on prompts written around their location.

Depending on how into it the players are, Fall of Magic can take from a few hours to several sessions. I once got through it in two hours at a convention, but we skipped a lot of locations. You can find the Roll20 module here and physical or digital editions from Heart of the Deernicorn. Don’t be put off by the price of the scroll—the digital edition is $15.