Animal Crossing is not the game for me, which is why I paid no attention to the goings on around the release of Animal Crossing: New Horizons. But two weeks into social distancing with my 14-year old, and I decided that this is indeed the perfect game for this situation.

To be clear, I still have not played this game myself and my understanding of it is limited. My knowledge is relegated to memes, passing comments and tweets from friends, and what I can glean from the mind-piercing shrieks that come from my daughter’s room when something good or bad occurs. She frequently brings her Switch to me to show off some new accomplishment (she took me on a museum tour recently), laments about her wasp stings, visits friends, and designs outfits based on her favourite show, Bee and Puppycat.

Based on her interactions and the internet buzz, I understand that it is a good, sweet way to pass the time, but little did I know that it could also teach my child to be a responsible, financially literate person.

First and foremost in her learning is the fact that Tom Nook is the keeper of all and if you want anything in this utopian world, you must go through this shifty raccoon. And it’s gonna cost you. Her current debt sits at 348,000 Bells, and her opinion on Nook is loud and clear:

The Animal Crossing community seems to be in consensus when it comes to the villainy status of Tom Nook. Everything Tom offers comes with an increasing cost. You can’t progress in the game if you don’t expand your home and meet Tom’s demands.

Nintendo disagrees with the negative assessment of Tom. “You do owe him money, but it’s not like he comes over and then asks you to pay him back,” producer Hisashi Nogami explained to the Washington Post. “And he doesn’t add interest in any of the loans that you may have. I think he really does stick around and wait for you and then lets you take the lead for paying him back.”

I offered this explanation to her, but she refused to listen, holding firm to her belief that Tom Nook is indeed capitalist scum. I suggested that she wouldn’t owe Tom that much if she just contented herself with living within her means in a comfortable tent. I encouraged her to fight the system and stick it to the man/loan shark raccoon. She didn’t deign to respond to my privileged naiveté.

As she learns more and more about how capitalism in the real world only suits the rich, and as I continue to buy stuff I really don’t need because those damn Instagram ads are made of temptation, I can’t argue with her judgement.

A Lannister Always Pays Their Debts

She’s already learned from my monthly complaints that accruing debt is often unavoidable, but paying it back regularly is a necessary evil. She’s also heard me go on about putting money aside. Though it seemed that she wasn’t listening, I am pleased to see my wise lessons being implemented within her Animal Crossing experience.

On one of our daily walks, she proudly explained her repayment and savings process to me, wherein she began with a regular repayment of 1,500 Bells. Whenever she earns just over that much, she gives Tom his cut, then puts the rest into savings. This amount has increased with the size of her debt, but that means her savings has also increased. 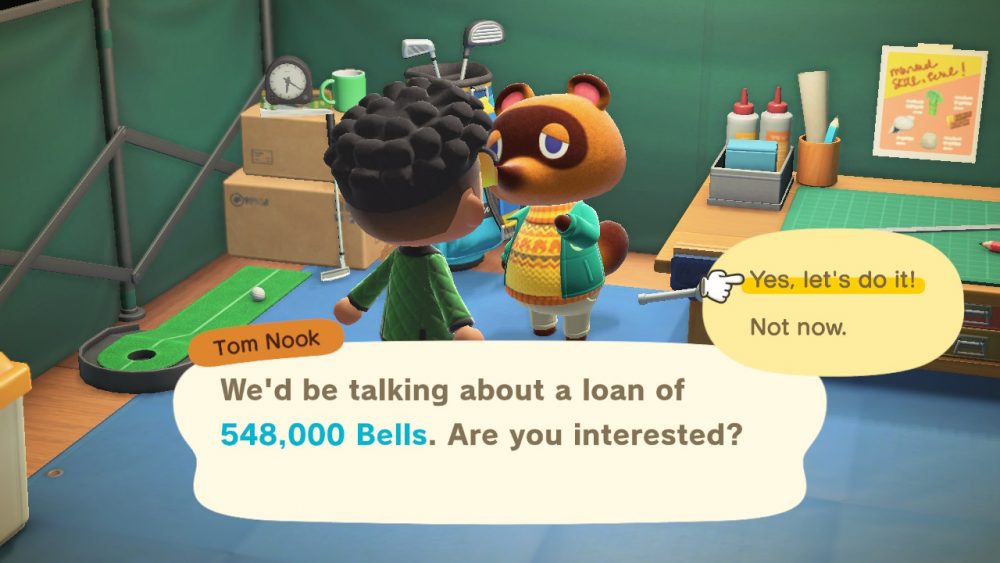 She also went an impressive step further as she started to earn Bells at a higher rate and her island presence became more established. She explained on a subsequent walk how she had started setting herself a 10,000-Bells spending limit per day, restricting herself from spending from any additional Bells she earned that day. She’s even set herself practical purchasing goals to work towards and takes pride in achieving them. I’m pretty proud of this, too.

When I remortgaged my house to take advantage of lower interest rates, my kids got that glazed look in their eyes as I explained what this meant. But when the idea of in-game interest comes up in relation to her savings and the debt she owes to Tom Nook, now she cares. She later realized that she didn’t accrue interest on her in-game savings, but the important thing is that this time when I explained the concept, she actually paid attention.

If you sell stuff to the Nook consortium, there’s a good chance you’ll see it pop up for sale at a ridiculously inflated price. And the stuff you might need to buy is likewise overpriced. If you can’t beat capitalism, or even determine sale values yourself, my daughter understands that she can be more selective about what she forages to sell to the Nooks in order to earn higher amounts of bells. She is presently participating in a fishing event and raking in the rewards after discovering how much she can get for an oarfish.

And she’s learned to play the Stalk Market, even experimenting herself on what days might work best in her favour for turnip sales. Learning to manipulate the markets in video games like Final Fantasy XI, City of Heroes, and Star Wars: The Old Republic was a highlight I wasn’t expecting, and I wish I had enough money to translate what I learned in those games into my real-life financial investments. Maybe my kid will take her learning from Animal Crossing and make my dream her reality.

When I bought this game, I thought it was simply a tool that would keep me safe from the dreaded “I’m bored” mantra and keep me high on the cool moms list. Turns out, it was the best educational investment I’ve made. I feel like this entire experience will have a positive effect on her future and look forward to reaping the benefits as she finally pays back all the debt she owes me. Because you bet I’ve been counting and I definitely charge interest, but I’ll waive the fees for that nine-month gestation period.

As for my almost 12-year-old… I bought her Red Dead Redemption 2. She’s developing her skills as a horse thief and bounty hunter, so, if this apocalypse goes the lawless dystopia route, she’s got it covered.