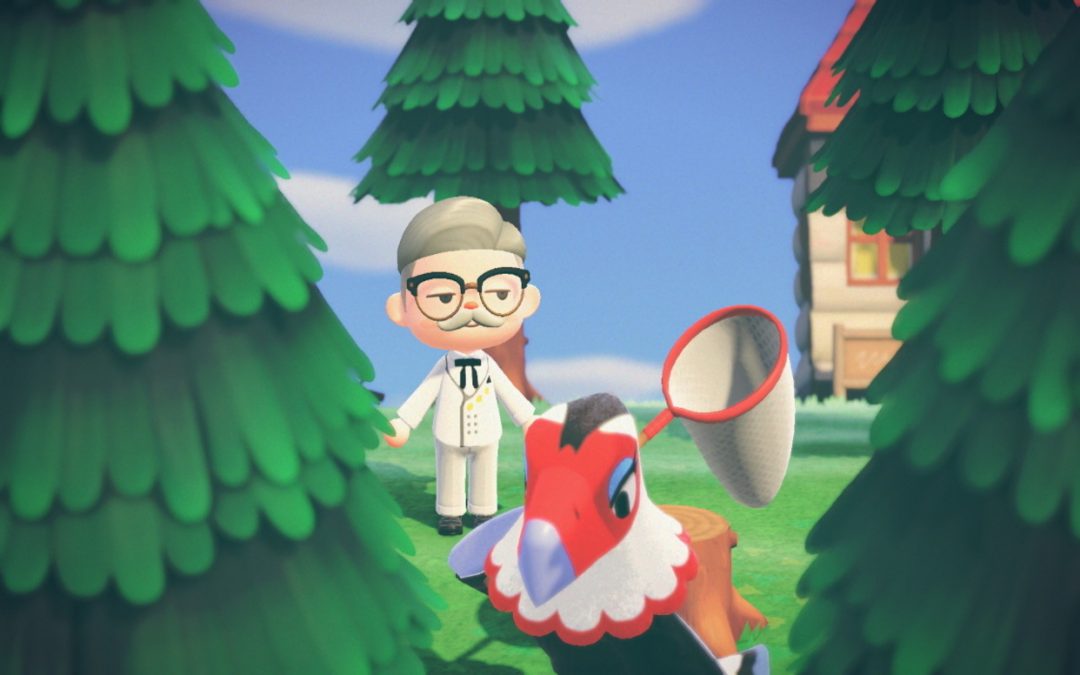 We are coming up on completing our first full month in our virtual retreat from the world—Animal Crossing: New Horizons. Being a cabal of many fascinating, talented folks, we’ve amassed quite a collection of strange and wonderful creations using the game’s customization features. Here to share their creations with you are E. Forney, Emily Durham, and Nola Pfau, each of whom take a unique and wonderful approach to crafting the getaway of their dreams.

Welcome to my island: Fornia (it’s better than California because we got rid of the completely unnecessary “Cali” thing and made it all about me: E. Forney!)

First, I’d like to show you some features of my island:

Upon arrival from the Dodo Airport, you are prompted immediately to wash your hands. Good hygiene is still required in the digital age. There’s a global pandemic, people, you can’t be too safe.

I like to be a good host, so I offer extra things I no longer need to my visitors! An area on the beach near the airport is dedicated to gifting; I have a free fossil corral, a section for spare recipes, and mystery prizes that best friends can dig up from the sand!

these bones shall never be buried #AnimalCrossing #ACNH #NintendoSwitch pic.twitter.com/RhVw7ZURxj

If I’m ever not around while my gates are open (which is often since I learned you can set your Switch to never go to sleep), then I will put up a little “afk (away from keyboard)” sign next to my custom minimap that includes all my special sites. And then I sleep in a hammock to really play it up.

Also near the airport is a little “survey” for guests to take. (Why yes, I am dressed as a sexy sushi, thanks for noticing!) It is actually The Wug Test, a linguistic experiment designed to test children on their understanding of how to form plurals in their native language. When prompted “There are two (of this creature that you were told is called a wug)…” English-speaking children should say “wugs” (adding ‘s’ for plural), while German-speaking children might say “wugen” for example. Answers I’ve gotten so far, mostly from people familiar with this test and trolling me: wugs, 2 wugs, 3 wugs, 5 wugs, wug, wugi, wugen, wuggen, and my favorite: wuggles.

I really love to design clothing and images on the pixelly design editor! I have displayed my gallery and maker code and a logo I designed for myself. (The maker code is MA-3181-6004-5805, as seen in the photo.)

When I found out you can put artwork on the ground, I knew immediately that I was going to need to make “long-running” jokes on my east and west coasts….

I love all the neat umbrellas you can buy at Nook’s Cranny. I’ve taken to collecting them. And, of course, that means I need to display them! So here is my umbrella collection so far. It is guarded by the Ancient Guardians of Stonehenge: Papa Bear, Papa Panda, and Papa Skeleton.

just postin abt the time i realized that instruments play in tune #AnimalCrossing #ACNH #NintendoSwitch pic.twitter.com/EmJUWUpsLL

While visiting a friend who had a saxophone on display, I discovered that instruments pick notes that are in key with whatever song is playing from radios/stereos. What a delight! It is really good design to not have things clash in this game about good vibes and chillin’.

and the time I bounced the ball #AnimalCrossing #ACNH #NintendoSwitch pic.twitter.com/vdyNNHgSYn

Another fun item I found on that friend’s island: the beach ball. I could… bounce it… forever…

Another pal had a microphone set up on a rock jutting into the sea. So, naturally, my pal and I decided to ~serenade the sea~.

There have been plenty of emergent games that people are playing within ACNH. I tried playing Sardines (AKA Reverse Hide-and-Seek) on my island when I had some friends over and it was pretty fun! If you want to play:

Unlocking titles for your passport is a really cute idea. I’ve kept the title “Casual Slingshot Ace” for a while now, partly because I am in fact ace (asexual), but also… I’m not too bad with the slingshot if I do say so myself! (The additional balloons from Bunny Day have certainly helped me practice!)

And finally, I absolutely must mention the saga of the Throwback Wrestling Figure (or as I call him, The Guy).

oh nooo. i had a vid that didn't post to Twitter of @sedimentalvalue's reaction to finding this buried at their doorstep the first time. i deleted it from my switch 🙁 #acnh pic.twitter.com/HJ2Gzny6U0

One morning, picking up my mail, I receive a gift from Emily. It has some innocuous message, maybe even the default “blah blah for all you’ve done for me blah.” I open it and… it is a strange little man, perhaps a bobblehead?

I immediately head for the airport to regift it. I don’t want this little weirdo, my storage is too full! Regifting in the mail occurs for a few times with notes like “No, I insist,” and “Really, it suits you.”

Neither of us thinks about The Guy for a little while after this gets old, and he lives in my storage. Then one day, after being invited to visit Emily, it occurs to me to bring The Guy. I visit Emily’s island and bury it deep in the north after waiting for a little while.

He isn’t found for a few days, until I’m rearranging my “dig up your own gift” area… and there he is, hidden amongst the actual good stuff. Now, he is truly a meme.

@sedimentalvalue and I keep hiding a cursed object at each other's island. This was their reaction. #AnimalCrossing #ACNH #NintendoSwitch pic.twitter.com/WkT4gW0JnW

me finding The Guy on my island

turns out there were 6(?) more (that I've found so far, who knows, more could show up) pic.twitter.com/IZmRiB9vgc

The next time Emily visits me, I notice I have a lot of X’s marking the spot… I find one figure… then another, and another… I think there were seven in total, a couple of which I found the next day, but there could still be some littered around my island. Terrible little time capsules for future-me to dig up.

My greatest achievement in this saga so far though has been this:

I see one day on Twitter that Emily is working on their next costume, King Rancho. As they mention in their section, the piece de resistance for the costume is yet to be acquired and is highly sought after… this is my chance. I respond to their tweet with “I gotchu” followed by “check ur mail.” Then… I wait.

I will never forget the angry phone call I received a few minutes later. It was glorious. (Don’t worry, I did in fact send them a tiara for their troubles after all that.)

I am living for the new Animal Crossing’s customization capabilities. I have played around extensively with the outfit designer, producing some truly hilarious (if I do say so myself) creations, including but not limited to:

“Officer Jigsaw” (from a My Brother, My Brother and Me bit)

My island is called Pipis Room (for reasons which involve Griffin McElroy and Vine, may it rest in peace), and I started my journey with what is to date still my magnum opus: I created the 70s paisley jacket Griffin wore in the Jobs episode of the MBMBAM TV show. It is truly my pride and joy.

Behold: now, you too can look like a rotisserie shithead AKA a very magical pervert AKA a combination of Ebenezer Scrooge and Hugh Hefnerhttps://t.co/HF0wEWhaP7https://t.co/0SpBXHOOCC#AnimalCrossingDesigns #ACNH #mbmbam @griffinmcelroy @McElroyFamily @DocCurm pic.twitter.com/ehD9ZchEI6

I also created approximations of my “I h8 u Ron” cosplay and E. Forney’s incredible “Shrimp! Heaven! Now!” cosplay that we wore to the Pittsburgh MBMBAM live show last September, in the good old days when we could attend large public gatherings. 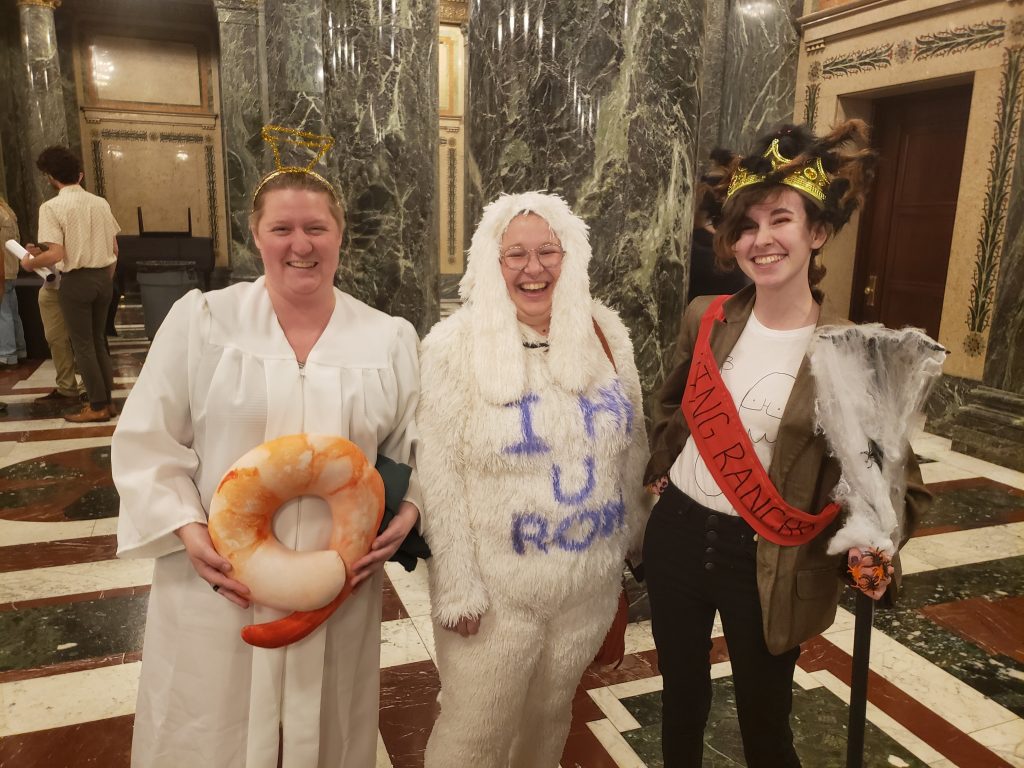 My brother also designed a custom baseball cap that says “Legalize Ranchos,” which is the best we can do for now, since I can’t make my King Rancho design until I get my hands on a crown in-game, but listen, the crown is a million bells. (You may recall Forney’s wonderful, horrible prank involving our wonderful, horrible boy.)

You may notice that the vast majority of my shenanigans (and the name of my island itself) are an homage to the McElroy family and their broad canon of silliness. New Horizons is giving me an incredible platform to express my extremely referential sense of humor, but also, it’s giving me the opportunity to share some of the same joy the McElroys have given me with other McElroy fans. I know many of us have been helped through the last several years of darkness with the sweet, light, earnest goofs of the McElroy family, so what could be better than to goof on ‘em right back with this sweet, light, earnest game (that the good good brothers are, themselves, currently playing)?

Anyway, all of these designs and more have been posted and are available under my creator ID: MA-9556-2879-9117. I hope these designs are downloaded by folks all over, until at least one of them (ideally the Jamiroquai’s Dad design, if I could be so bold as to choose) reaches the eyes of our beloved boys. 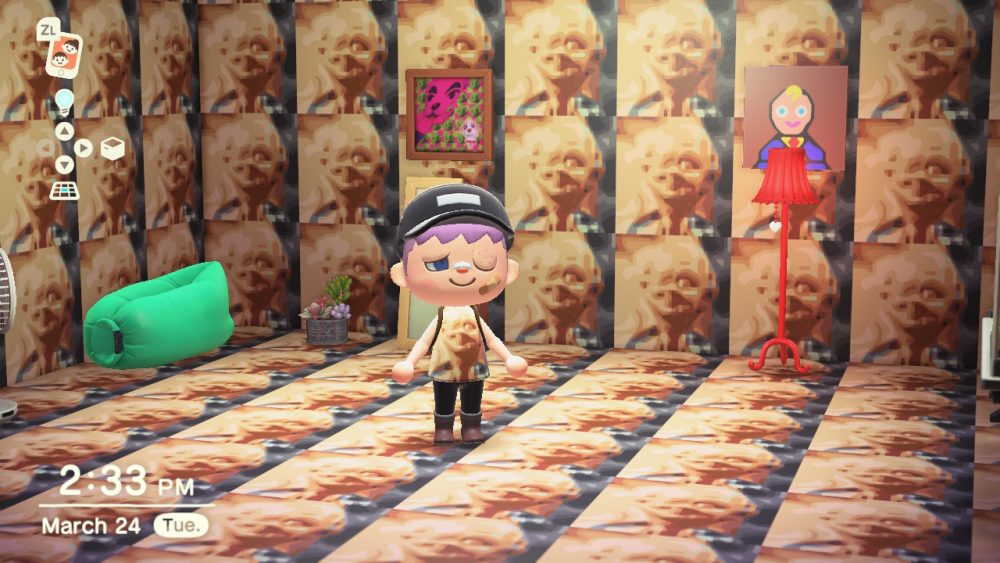 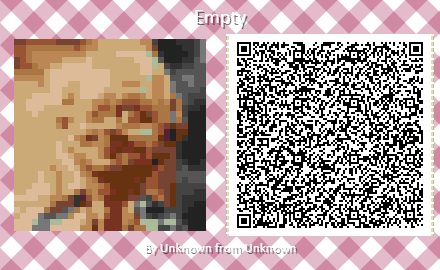