Where Do We Go Next: Kentucky Route Zero’s Anxious Approach to Hope 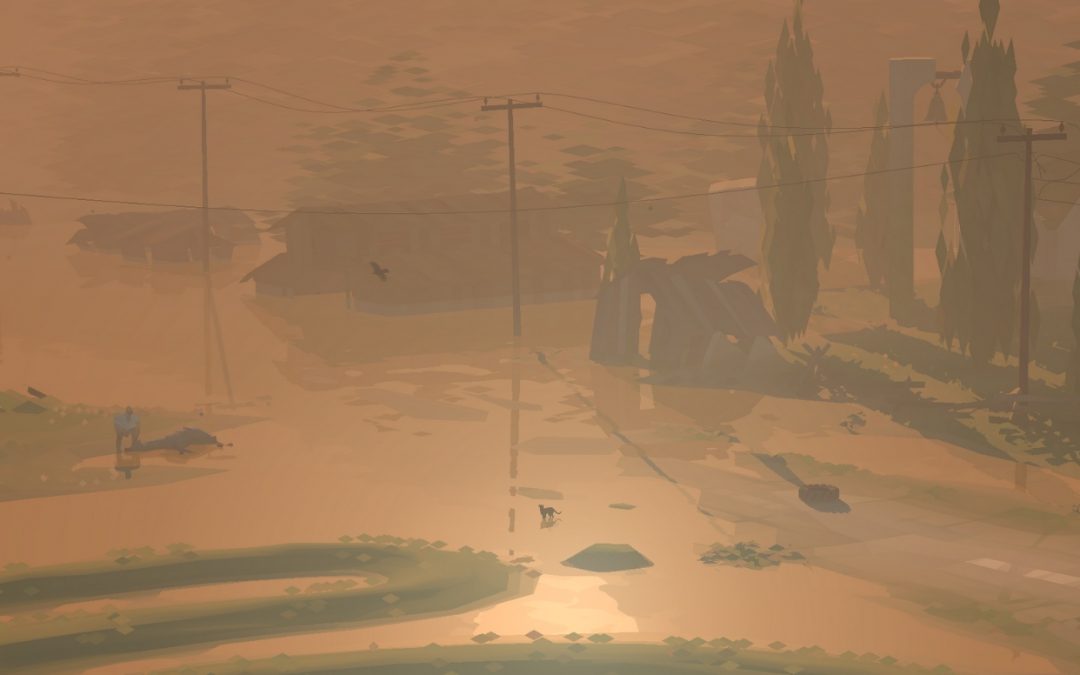 Sometime during the several hours that I played Kentucky Route Zero, I began to resent 5 Dogwood Drive. For the first four acts of the game, Dogwood Drive is mere legend—impossible to drive to, real enough that non-player characters offer directions to it, and important because it’s where the player characters need to make a delivery. But while getting to 5 Dogwood Drive is the goal of the game, it isn’t the point of it. Kentucky Route Zero is a game about the odyssey of merely existing under the inherent, subtle violence of capitalist systems. Financial instability keeps the characters forever caught in the liminal space that stretches between one stage of life and the next. The uncertainty makes each choice feel weighty yet meaningless at the same time. Ultimately their fates are shaped—some more bluntly than others—by capitalism’s hand, which lends the narrative a unique anxiety.

This piece includes spoilers for the entirety of Kentucky Route Zero.

At the beginning of Act V, Shannon, Ezra, Junebug, Johnny, and Clara have reached Dogwood Drive after a winding journey that was extended by the game’s seven-year development cycle. Along the way, Conway (an aging delivery driver and Kentucky Route Zero’s first player character) loses his assets and future to the predatory practices of Consolidated Power Company. Act V begins without him.

Where previous acts took place after dark and largely in the subterranean caves beneath Kentucky, Act V opens above ground. Between the darkness and the seemingly unending journey, Kentucky Route Zero traps its characters in a liminal space, unable to move forward with their lives until the night is over and their delivery complete. The liminal state, as defined by anthropologist Victor Turner, is the period of in-betweenness and transition from one stage to another; liminal personae do not abide by the rules and groups that determine social order elsewhere.

Because of this, the morning light feels like a breath of fresh air. The opening moments of Act V—the slow pan of the camera over the peachy glow of the sunrise over a field—breaks the sense of liminality established throughout the game.

Instead of controlling one of the remaining party members, the player guides a cat around a place known only as “A Town.” The name of the town isn’t really important, just as reaching Dogwood Drive isn’t the point of Kentucky Route Zero. The last piece of the game is told through what the cat observes. With no roads in or out, the town is tranquil, idyllic despite recent flooding. While walking around, it occurred to me the town didn’t have a name because you could find similar in almost any rural area. It feels miraculous that the town is seemingly untouched by Consolidated Power’s reach, but players soon learn that freedom has come at a cost.

As the cat explores the surroundings, we learn the area flooded in a bad storm, which destroyed a field and killed two horses just before Shannon and the others arrived. Through overheard conversations, we also learn the town was once part of Consolidated Power’s ever-expanding influence. The company began building new structures but left abruptly without finishing what was started—namely, the drainage system that would have prevented the flooding. 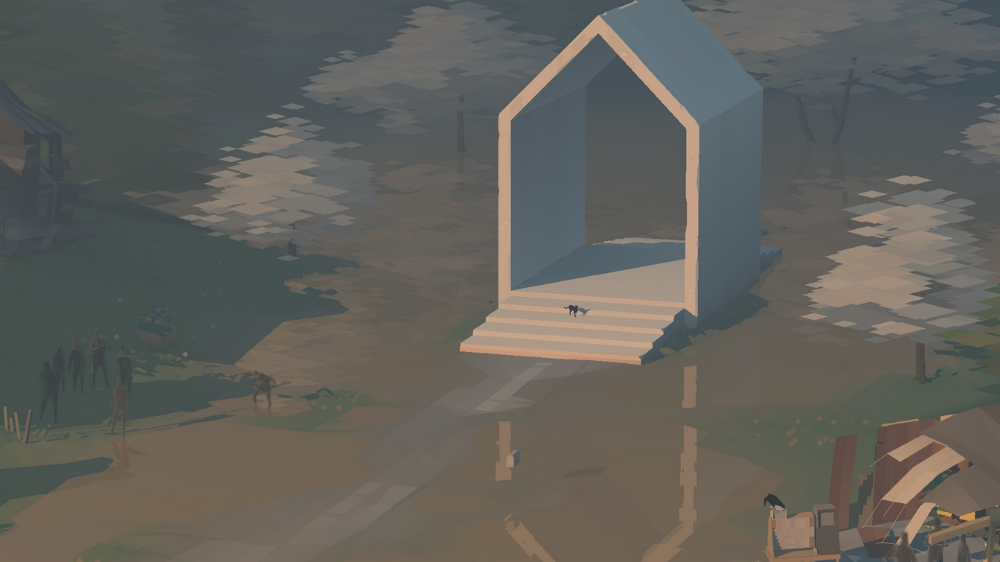 The mote of resentment I was holding onto vanished as I explored. Of course it’s not Dogwood Drive’s fault that Conway can’t find his way there. That blame lies with Consolidated Power Company and its parasitic destruction of communities and workers alike. The town is just another place that’s been sapped for profit and abandoned once Consolidated Power sucked it dry. Its residents, living and dead, are victims like everyone else, and when the delivery crew arrives, most of those residents are preparing to leave.

Though most of the townspeople are ready to move on and start fresh elsewhere—or at least unable to stay any longer—they invite Shannon and the others to stay. Staying would mean Shannon no longer has to worry about losing her lease and could pursue a career she loves. It would also mean Johnny, Junebug, and Ezra can enjoy the family they’ve found in one another.

In a way, it reminded me of the end of The Princess Bride. In the book, as the characters have successfully fled their tormentors, the comfort of a happy ending is torn away in a line: “However, this was before Inigo’s wound reopened; and Westley relapsed again; and Fezzik took the wrong turn; and Buttercup’s horse threw a shoe. And the night behind them was filled with the crescendoing sound of pursuit…”

Like The Princess Bride, Kentucky Route Zero’s ending is almost a happy ending. However, as you explore the town it becomes impossible to ignore its roaming ghosts. The ghosts are few at first, and then all around, silent shadows that cause no harm themselves while reminding the player of Consolidated Power’s considerable legacy of exploitation. Even though reaching the game’s final destination means transitioning out of one liminal state, the ghosts—liminal dead—are a stark indicator that the characters haven’t transgressed liminality entirely.

Shannon, Ezra, Johnny, Junebug, and Clara might not be under Consolidated Power’s watchful eye at the end of the game, but they’re almost certainly just one bad day away from financial ruin like Conway was. In Act V, the consequences of their actions won’t just affect how quickly a piece of furniture is delivered. Instead, the outcome of their actions will have much longer-lasting effects on their futures.

Kentucky Route Zero takes on liminality as defined by two different anthropologists. The first definition is by Victor Turner, who defined liminality as the period of time a person spends between two states or stages of life. The second is what anthropologist Paul Rabinow called purgatorial anxiety, a type of liminality characterized by a feeling that the future is on the line. One important aspect of Turner’s definition of liminality is that personal or social transformation awaits liminal personae on the other side; for better or worse, their lives will somehow change from one stage to the next.

Dr. Susan Merrill Squier argues the heightened stake in the future is the key difference between Turner’s liminality and Rabinow’s purgatorial anxiety. In Liminal Lives: Imagining The Human At The Frontiers Of Biomedicine, she writes, “The liminal is an arena of possibility, the purgatorial is an arena of responsibility.” Turner’s liminality is one of potential; in Kentucky Route Zero, the night takes characters to the most unexpected places. Rabinow’s liminality is one of reckoning; the morning comes and the characters have to make decisions that will determine their futures.

Like The Princess Bride, Kentucky Route Zero’s ending invites interrogation. The game asks a lot of both its characters and its audience; it asked me to consider questions big and small, many explicit and some implied. But mostly it asked me to observe, without affecting in any meaningful way, its narrative and outcome. I could change the tone of the scene by choosing a slightly more positive or negative response, but Conway was always going to end up at Hard Times Distillery and Shannon’s livelihood was always going to hang in the balance. The audience, like the skeletons who work for the distillery and the ghosts who roam the town and the characters who live in it, is trapped in a state of purgatorial anxiety. We can only guess what happens to Shannon, Ezra, and the others once the curtains have closed and the game has ended.

Kentucky Route Zero ends with music. The townspeople, along with Shannon, Ezra, Johnny, Junebug, Clara, and the town’s ghosts gather in front of the barn to bury the horses killed in the storm. The funeral closes with a hymn, after which the townspeople and ghosts disappear to wherever they’re going next. Watching the scene play out felt bigger than than a memorial for the horses—it’s a memorial for those Consolidated Power has hurt.

The ritual of a funeral feels cleansing, an acknowledgement of past pain. This moment was so perfectly bittersweet I expected Kentucky Route Zero to end there, but it didn’t. In the final scene, Johnny, Junebug, and Clara play music for Shannon, Ezra, and the remaining townspeople in the empty 5 Dogwood Drive. Unlike the other buildings in town, 5 Dogwood Drive is unique in appearance. Squarish with a sloped roof, it would look like a classic house, except it’s entirely open in the center with no front or back. One of the townspeople tells Shannon it showed up with the storm, as though Shannon arriving with a delivery for the house was a chance meeting instead of a deliberate journey.

Throughout the first four acts of the game, the characters of Kentucky Route Zero experience Turner’s transformation in finding one another and deciding to leave their old lives behind. In the final act, the the characters have met their goal and they must grapple with Rabinow’s purgatorial anxiety. Where the first four acts of the game ask, “How do we get there?” the final act asks a much bigger question: “Where do we go next?”

Kentucky Route Zero’s characters have everything to lose and everything to gain by staying in the town; the future is very much at stake. Away from Consolidated Power’s watchful eye, they aren’t necessarily teetering on the edge of financial ruin, but they don’t have any community resources. The town has no grocery stores, no mail delivery, no roads leading in or out—the things most of us probably take for granted. Staying will take work, and the work will be grueling, and even then there’s no guarantee of success. The final scene of the game shows the town’s remaining residents sitting in the open space of 5 Dogwood Drive, enjoying Johnny, Junebug, and Clara’s music. I felt hopeful but uneasy watching it, knowing how difficult the path forward would be.

If music is a ritual of goodbyes, it is also a ritual of beginning. Kentucky Route Zero leaves so much open to interpretation, but in asking me to imagine a future, it gave me the space to imagine a better one, one where the pain and hardship are worth it—a future worth fighting for.