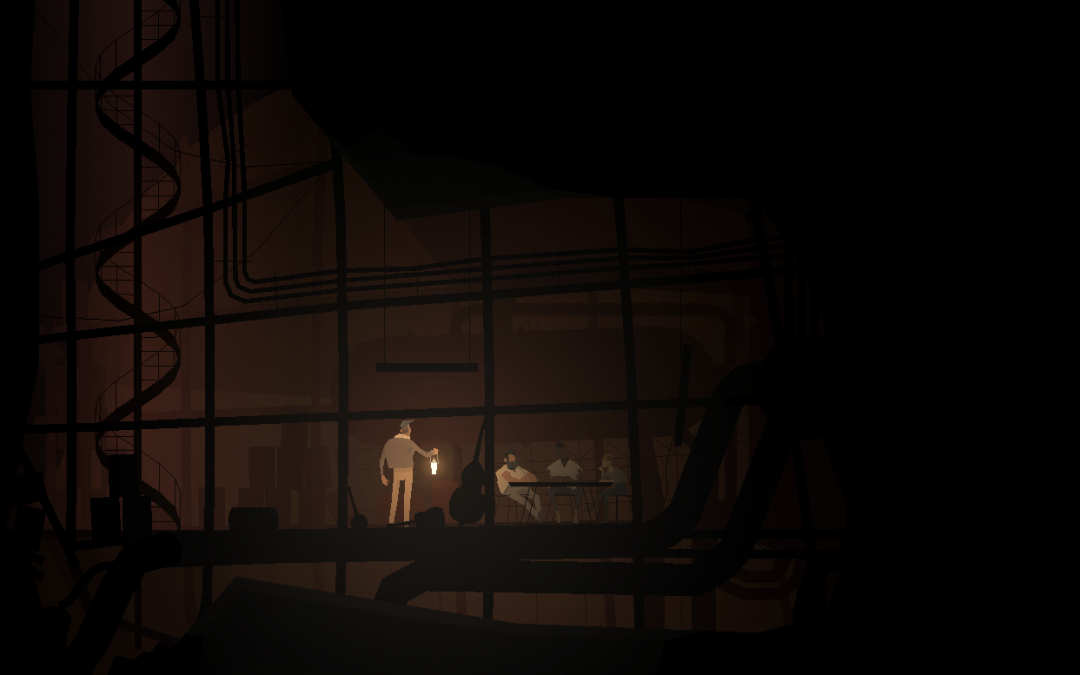 Equus Oils is a gas station like any other. There’s a superintendent, a general store, a few tanks, that strange sloped roof and a giant metallic horse. A sculpture of craftsmanship, of individuality, not given a name. When we move Conway into the basement of the station, the writhing mess of wires and pipes unveils a secret world. It is still haunted by its prior inhabitants, still echoing with their voices. The horse’s head has a body, a soul, but it is still shaped by the business it embodies.

This article contains broad thematic spoilers for the entirety of Kentucky Route Zero.

Gas stations, like fast food restaurants, train stations, etc. cannot be inhabited; they can only be passed through. They serve a singular, distinct purpose and are built to be forgotten. These are what french anthropologist Marc Augé calls non-places. In his book Non-places: Introduction to an Anthropology of Supermodernity, Augé defines non-places by what they are not: “If a place can be defined as relational, historical, and concerned with identity, then a space which cannot be defined as relational or historical or concerned with identity will be a non-place.” While a typical office building might have history or even identity, it is difficult to say that this is historical or concerned with such things. Most offices are meant to be malleable. As one business moves or shuts down, another will take its place. Capitalism’s anonymous efficiency flattens our experience. The objective of Wal-Mart and McDonald’s is to be largely the same for every person who enters. To live in post-modernity is to pass through, to live in-between, to forget the material history all around us. 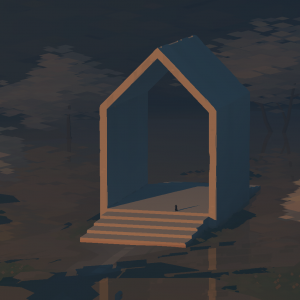 Kentucky Route Zero, Cardboard Computer’s travel poem, both traffics in and combats these spaces. From the Equus Oils gas station to the Bureau of Reclaimed Spaces to the Zero itself, our players travel through, lingering but never dwelling. The Bureau used to be a cathedral? An apartment complex? Who could say. Its purpose now is to reshape space, to replace it with something new, just as its office’s history has been erased. Even Shannon, Conway, and their growing fellowship of journey-people are between lives. Shannon’s work has dried up. Conway’s delivery to 5 Dogwood Drive is his last. Ezra searches for his family. Junebug and Johnny are traveling between gigs.

Much of the “plot” of KRZ is discovering that the maps have been rewritten. Our wanderers spend Act II trying to find a doctor who is always somewhere else. The anonymous highway of the Zero marks its exits with ghostly, universal images. Once perhaps this meant something to someone, but now it serves as an exit number. Even the search for 5 Dogwood Drive ends without definitive markers. This house must be it, right? There’s no one here to claim their delivery nor any sign. It is just two walls, a floor, and a roof. A signifier of a home, without clear history. Contextually, though, this must be the place. As Laura Hudson emphasized in her excellent piece, the map has become the territory.

From pop songs to Tumblr posts, non-places occupy both our lives and our public imagination. The millennial lament of being unable to buy a house is, in part, a lament against not having a place of one’s own. Even if we have the money for a mortgage, the house isn’t ours, not yet. Debt makes us all anonymous. Kentucky Route Zero literalizes this process as people’s bodies become repossessed, replaced with the skeletal limbs of the anonymous worker. As Conway joins the ranks of Hard Time Liquor, they mark and claim his individual body, just so they can make him like any other employee. 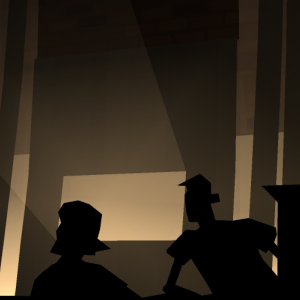 Marc Augé described how identity gets wrapped into anonymity: “The space of non-place creates neither singular identity nor relations; only solitude, similitude.” (103) We are alone in public, to use the common phrase, sharing in each other’s lives while being merely echoes. While Marc Augé’s approach is cold diagnosis, Kentucky Route Zero screams against this anonymous terror. We sense that anonymity as Conway discovers a church with music but no congregation, or as Junebug and Johnny explore a quiet service stop. However, as the game flickers between characters, it grounds us in the particularities of their lives. When Conway limps, we feel his shifting weight. We feel Ezra’s boyish buoyancy and Shannon’s lingering, slow regret. While they pass through anonymous spaces, the players cannot just pass through them. Their bodies, their selves, their singing interrupts us; occasionally they stop us cold. In Act III, as Junebug and Johnny play their song, the roof of the bar explodes. Space transforms through music, a reclaimed self exploding into the wild blue. Briefly, they make the world new.

The workers that make these spaces mark them, in ways both ethereal and permanent. Personal effects, objects of significance populate the abandoned coal mine in Act I. Though their exact meaning remains elusive, they are cairns left by both individual and collective selves. The coal mine is an anonymous space graffitied with work. Kentucky Route Zero returns to this pattern again and again. The nameless man at the convenience store in Act IV makes this hollow space a place of rest and comfort. Musicians appear outside of frame, texturing these places with their songs. Joseph at Equus Oils sits in a Queen Anne armchair specifically. As we move through non-place, we transcend it. We leave behind ghosts both beautiful and strange. We might only be able to linger, but our ghosts dwell. We can sing and remember them.

KRZ’s defiance against the anonymity of non-place reaches its climax in the game’s final moments. In Act V, there is no travel. The gas stations, government offices, and rest stops fade away. You are simply here, in The Town. In Acts I through IV, Kentucky Route Zero’s cinematography was defined by zooms, shifting walls, and perspectives. No more. The camera, instead, revolves around a single point. The episode spirals out from the center of an ancient indigenous structure. Time loops. We see communities both ancient and new create and die. At the end, another act of labor shapes the world. A singular voice becomes a chorus and sings a new community into being. 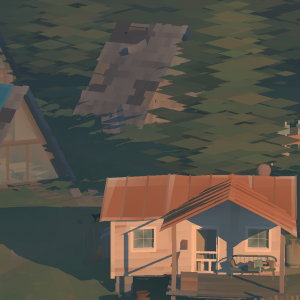 Though playing KRZ so often requires moving through, its ultimate concern is in making a home. It makes the player into a collaborative poet, lets them help choose the words, focus on the creation of a personal history. We write these places, these homes, with our voices. Even if you are leaving, we can go “that way” together. Kentucky Route Zero understands the space of our lives to be malleable, shaped by capital as much as it is our efforts against it. This is why, both despite and because of its wistful melancholy and its slow, quiet violence, KRZ is a story of hopeful, sorrowful anger. As Austin Walker put it, “capitalism [remembers],” but so do we. Though the spaces we live in might encourage us to, we don’t have to forget. The ghosts of the world, of the oppressed, still dwell here. Kentucky Route Zero only asks if we can hear them, if we will help them shape the world and make it new.